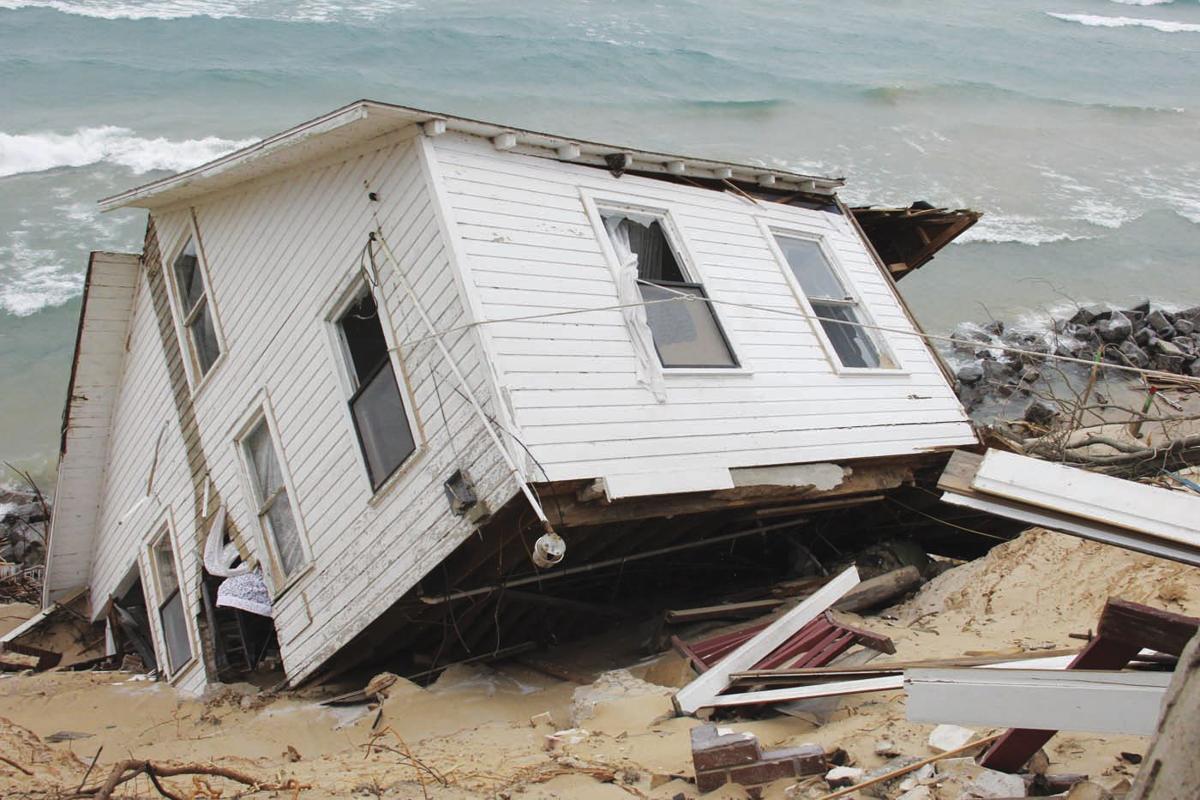 Tish Gancer’s White River Twp. cottage sits at the bottom of the bluff it was built upon. The property which once overlooked Lake Michigan was purchased by her grandfather in the 1930s. 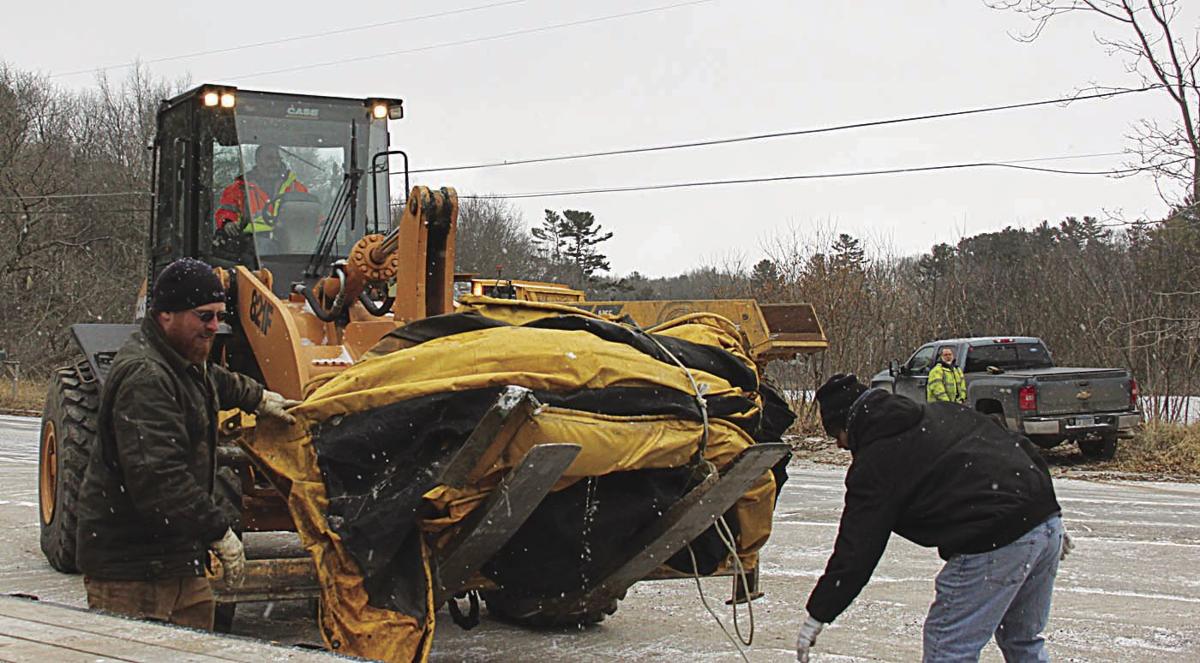 On Wednesday, Jan. 8 workers from White LakeDock & Dredge, Inc. moved equipment and materials needed for the eventual demolition of Tish Gancer’s home. President and co-owner Bob Gezon said the date of the demolition will depend on the weather.

Tish Gancer’s White River Twp. cottage sits at the bottom of the bluff it was built upon. The property which once overlooked Lake Michigan was purchased by her grandfather in the 1930s.

On Wednesday, Jan. 8 workers from White LakeDock & Dredge, Inc. moved equipment and materials needed for the eventual demolition of Tish Gancer’s home. President and co-owner Bob Gezon said the date of the demolition will depend on the weather.

WHITE RIVER TWP. – Tish Gancer’s White River home sits at the bottom of the bluff overlooking Lake Michigan it was built upon.

The home, which was purchased by her grandfather in the 1930s, was once surrounded by trees, said the owner. However, due to high water and erosion little by little those trees began to disappear. The end result was her home falling over the edge on this past New Years Eve.

Back in October, Gancer contracted with White Lake Dock & Dredge, Inc. to pull permits, and build a rock revetment that might have prevented the inevitable disaster. However, according to president and co-owner Bob Gezon, by the time the permits and financing went through it was too late to begin the work requested by her.

Gancer, in a separate conversation, added that the construction of the revetment was delayed due to a storm that took place on Dec. 23. She said she felt confident that a revetment would have worked, and thanks Gezon and crew for all that they’ve done and are doing.

Now instead of trying to preserve her home, the White Lake Dock & Dredge, Inc. is responsible for tearing it down.

On Wednesday, Jan. 8 workers from White Lake Dock & Dredge, Inc. moved equipment out to the site, but they could not begin demolition because of the weather. The home was removed the next day, Thursday, Jan. 9.

According to Gezon, it is Gancer’s wish to protect the land around her home. So, White Lake Dock & Dredge, Inc. will also be building a revetment, but first they need the water to freeze.

When the water freezes, and forms icebergs, workers can begin working on the revetment. They can use these icebergs as cover for their equipment to work behind.

This past December, water levels for Lake Michigan-Huron were at above average levels. However, according to Deanna Apps, a physical scientist for the U.S. Army Corps of Engineers (USACE) Detroit, the lake(s) have yet to reach their record high.

• At 1:13 a.m., a 25-year-old Laketon Township woman was arrested for an assault and attempted larceny at a business in the 8700 block of Ferry Street. According to police the woman was asked to leave Jimmy’s Pub and assaulted an employee by swinging her arms while being led out of the business. She was also charged with attempted larceny of a crock pot. Her probation officer was contracted about a possible violation of probation by the woman.

• At 7:31 p.m., in the 8900 block of Water Street, a 44-year-old Montague man was cited for driving while license suspended. Police said a vehicle driven by the man was pulled over for cutting through the Wesco parking lot at an unsafe speed in an attempt to catch up with a friend. Police were at the business and witnessed the incident. After the man was stopped it was discovered he did not have a valid drivers license.

• A resident of the 200 block of E. Muskegon Avenue reported that she was the victim of phone harassment. The victim had separated from her husband but was keeping in contact with his children through Facebook. The man was then calling and leaving several messages telling her to stop. Officers have attempted to contact the man without success and this 6:45 p.m. call was the second such report made to Whitehall Police.

• At 6:16 p.m. police were dispatched to a call of possible armed subjects in the 800 block of S. Mears Avenue. When officers arrived they located two 13-year-old boys and learned that they had “Airsoft” pistols and were playing and shooting at each other. No further action was taken.

• Whitehall Police responded to a trouble with subject call at a business in the 700 block of Colby Street. The subject arrived at the business and was asked to leave because an employee there had reported the man had attempted to expose himself to her. The man became upset and initially refused to leave but did when the business called 911. Officers spoke with the subject and warned him not to return to the business.

• A resident of the 200 block of W. Main Street reported that someone had attempted to steal yard ornaments from their yard. The 9:20 a.m. caller said the items that were usually near the front porch were found lying down near the roadway. The victim believes the suspect was scared off during the attempt and left the item.

• An officer investigation into a suspicious vehicle led to two Montague teens being cited for possession of marijuana. At 8:38 p.m. the officer was patrolling in the 700 block of Hanson Street and saw the vehicle parked at the end of the street with not lights on. While speaking with the man and woman the officer noted a small butane torch and a bong in the car and when questioned the man admitted to having marijuana in the car and surrendered it to the officer. The officer also confiscated a small crate that held several different marijuana pipes. The 18 year old suspects were released after being cited.

• Officers were dispatched to a family dispute at 7:06 p.m. When officers arrived in the 900 block of Livingston Street they learned that it was only a verbal argument between a son and his mother about her watching his children. Officers mediated the dispute and the mother left shortly after to go home.

• A man had beer poured over his head and was kicked by a roommate. The suspect tried to run from police while in a room. A woman tried to block police from leaving with the suspect. The woman was arrested and then kicked and hit the officer arresting her. This all happened in the 100 block of N. Livingston Street. Police were called at 5:40 p.m. and were met by the victim who said the three of them were drinking when his 61-year-old roommate became upset and assaulted him. A second officer was speaking to the suspect, and when the suspect became loud the first officer attempted to go inside to ensure there was no trouble, but was blocked by a 60-year-old woman who lives at the house. After entering and consulting with the second officer they told the man that he was being arrested. He then ran into the kitchen area and around a small wall that led directly back to where the officers were standing. After struggling briefly to gain control of his hands the 61-year-old was handcuffed toward the door. The woman then stood in the doorway of the home and told the officers, “He’s not under arrest!” The woman refused to move and resisted being moved. She was then arrested, and while the first officer attempted to gain control of her hands and handcuff her she kicked backward hitting the officer in the leg and then swung her arm back hitting him in the side. Both were eventually taken into custody and lodged at the Muskegon County jail. The man was charged with domestic assault and resisting arrest. The woman was charged with obstructing officers and assaulting a police officer.

• A 3:53 a.m. traffic stop led to the arrest of the driver on an outstanding warrant. An officer on patrol observed the violation at the intersection of Mears Avenue and Main Street and stopped the car in the 1300 block of Lake Street. When checking the 23-year-old in the computer it was discovered that she was wanted for a probation violation. The Whitehall woman was taken into custody and later to the Muskegon County jail. The vehicle was released to a passenger.

• A routine check of a license plate led to the arrest of the driver on a warrant and new charges of possession of methamphetamine. Whitehall officers had been assisting Muskegon County deputies on the west side of Montague and were returning when they checked the vehicle ahead of them and saw the registered owner was wanted on the warrant. After receiving permission to make the stop from Montague police, a stop was made in the 8000 block of Water St. The 23-year-old driver was identified and taken into custody and was going to be turned over to Oceana County deputies. While waiting for the deputies, officer found methamphetamine in a vile on the key ring belonging to the Shelby woman. The suspect surrendered an additional rock of methamphetamine when questioned. The suspect was then taken to the Muskegon County jail and lodged for drug possession.

• A 17-year-old Montague man was arrested for operating while intoxicated during a 7:32 p.m. traffic stop. On officer on patrol observed a vehicle with a defective headlight and began to follow and noticed that in the 500 block of S. Mears Avenue it nearly struck a traffic cone on the edge of the road. During the stop the officer noted the strong odor of marijuana from the vehicle and questioned the driver who admitted to smoking marijuana earlier in the day. The officer then had the suspect perform sobriety tests and arrested him after failing the tests. He was taken to the Muskegon County jail where a blood sample was taken to be sent to the MSP crime lab. He was lodged at the jail.

• At 11:44 a.m., a weapons offense and accident were reported in the 8500 block of Holton-Duck Lake Road at Marvin Road, Holton Township.

• At 12:08 a.m., driving while under the influence of liquor or drugs was reported at Dalson Road at E. Riley Thompson Road, Cedar Creek Township.

• At 4:10 a.m., disorderly conduct was reported in the 1600 block of Oak Avenue, Muskegon Charter Township.

Periods of snow. Temps nearly steady in the low to mid 30s. Winds SE at 5 to 10 mph. Chance of snow 90%. Snow accumulations less than one inch.