A new round of the Momentum Business Plan Competition has officially begun, and applications are now being accepted for the 2020 contest.

Mason County entrepreneurs with less than $250,000 in annual sales or revenue are eligible to enter, and could win up to $50,000.

Applications will be accepted until April 2, and a “Shark Tank”-style pitch night will take place in May at the Ludington Area Center for the Arts, 107 S. Harrison St. Tom Hinman, talent and entrepreneur development coordinator for the Ludington & Scottville Area Chamber of Commerce, said the Momentum competition offers a chance for new and up-and-coming business to get established or expand.

“This is an amazing opportunity for a business that has just started and is ready to make the jump to the next level,” Hinman said. “The competition provides not only prize money, but also professional business counseling to the applicant throughout the entire process.”

Last year was the first time the $50,000 prize money was split among competitors.

Sarah Stechschulte, owner of Inspired Parties of Ludington, was awarded $14,000 as the first-place winner of the 2019 contest. The business offers social art events, with a focus on step-by-step paintings and projects, in the Mason County area. Since then, Stechschulte has expanded the Inspired Parties building, and on Dec. 23, 2019, a ribbon-cutting and open house was held at her newly renovated facility on Jebavy Drive.

She now has a drop-in workshop area and also holds instructed art events at the site.

Awarded $9,000 each as tied, second-place winners in 2019 were HumaniTea, Leta’s Educational Daycare, The Tailor Shop and Art by Mary Case.

The Momentum Business Plan Competition is administered by the Ludington & Scottville Area Chamber of Commerce and funded by Pennies from Heaven Foundation. Eligible contestants must submit business plans by April 2, after which they will be short-listed to five finalists, who will present to a panel of judges. Contestants will each be given five minutes to highlight their plans, followed by seven minutes of questions from the judges.

For complete details on the competition and to apply, visit www.momentumstartup.org.

The Pere Marquette Charter Township board will hold a final public hearing for its five-year parks, recreation and open space plan as a part of its regular meeting at 6:30 p.m. tonight.

Following the hearing, the board will consider plans on approving the plan, which has been available for the public to read for the required 30 days.

“There have been no comments to date,” said Rachelle Enbody, P.M. township clerk. There have been ample opportunities for public input, according to Enbody.

A survey was published on the P.M. township website, a community town hall was hosted in July, and two community outreach events in August. If there are recommendations at the upcoming meeting, Enbody said there is a chance the vote will be delayed.

A big part of the plan is the new conservation park.

The township was awarded a grant in 2017 from the state to plan.

Parks Manager Kelly Smith said the public can expect a “conceptual master plan” at the end of 2020 for the new conservation and recreation area.

Smith said they are being “methodical” in planning, even utilizing a special national parks program built to assist with this kind of situation, he added.

Smith is hopeful the proposed five-year plan will be approved.

The park plan is available on the township’s website, www.pmtwp.org.

In this map, the purple sections designate the property Pere Marquette Township acquired from Dow Chemical to establish a conservation park, the light blue sections are current township parks, the light green section is state land, and the yellow section belongs to OxyChem. 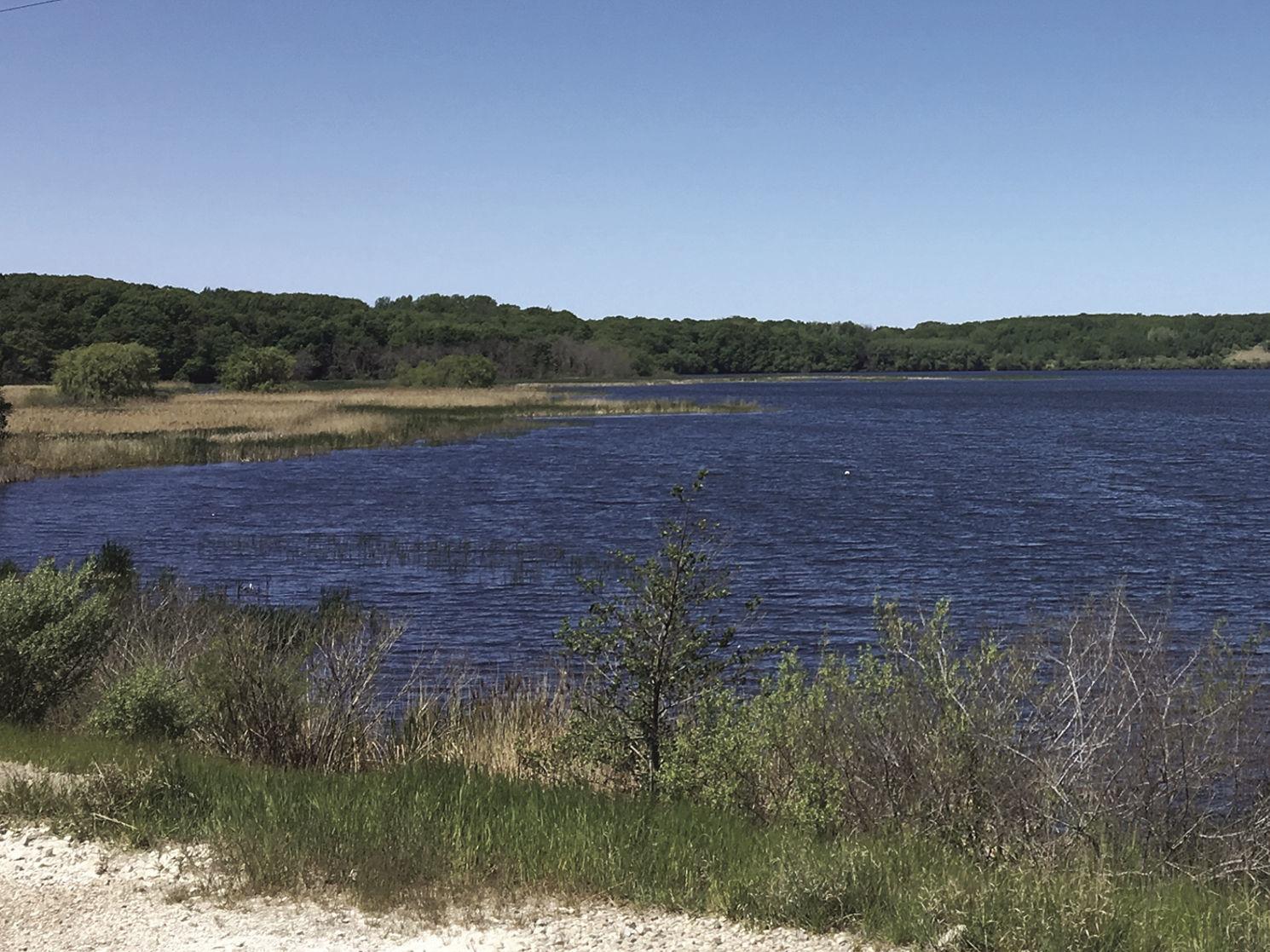 The shoreline along the southern end of Pere Marquette Lake is part of the more than one mile of lakefront property Pere Marquette Township acquired from Dow Chemical to establish a public recreation and conservation park.

The Mason County Right to Life organization will host its annual Ecumenical Memorial Service & Silent March for Life at 2 p.m. Sunday at the Community Church, 109 N. Harrison St., in Ludington.

The public is invited to attend and join in a celebration of life, as well as a prayer service. Following the service, there will be a silent march from the church to the courthouse.

Special guests the Milstead family will deliver a story about adoption and hope. Music will be provided by the Lighthouse Baptist Youth Choir.

The Ludington City Council voted Monday to deny an appeal of a request by Tom Rotta for minutes of two closed sessions under the state’s Freedom of Information Act.

Rotta was seeking the minutes of closed sessions from Nov. 25 and Dec. 9, 2019, and he was denied those minutes by the city’s FOIA coordinator Carlos Alvarado.

Later that night, back in open session, the quorum of four councilors voted to approve the settlement agreement.

“The city had no active legal case at that point in time, ergo it had no reason to go into closed session,” Rotta said during the meeting’s first public comment period. “Once again, a quorum councilors kicked the public out and deliberated for about 12 minutes ostensibly over a decision that had already been made at a prior meeting.”

Rotta told the council during the public comment period that he planned to file a suit if it denied his appeal.

Councilor Kathy Wincheski asked the city attorney, Richard Wilson, if the sessions were merely a mistake or truly illegal. Wilson responded that it was a mistake in November based on OMA law, and he said he and his firm were unable to locate in state law what the impact of that mistake is and its impact on the minutes specifically.

Wilson said the Open Meetings Act allowed the council to go into the second closed session to re-enact the previous meeting.

“By so doing, we’re not admitting any violation of the Open Meetings Act. We were simply doing what the law allows us to do,” he said.

He also addressed the point of Rotta’s that there wasn’t a pending lawsuit. Wilson said that because the courts had not signed off on or finalized the settlement of Rotta’s and Seelhoff’s lawsuit, it was still an open matter, and the council could discuss the litigation in closed session.

“Until that order is signed by the judge, then there is pending litigation,” Wilson said.

City Manager Mitch Foster noted the forecasts by the U.S. Army Corps of Engineers indicate that the level of Lake Michigan will exceed the record-high levels of 1986. He said the issues with the intersection of Rath Avenue and Melendy Street, the yacht club near Copeyon Park and along the waterfront both with Lake Michigan and Pere Marquette Lake will continue because of it.

Foster said the city will look into possible solutions it can enact do to mitigate the damage the high water now that would not be permanent, in the event that the water levels later recede.

Nominating petitions for councilors at-large, as well as councilors for the first, third and fifth wards, are due by April 24 along with those who seek the office of city treasurer, said Ludington City Clerk Deb Luskin.

• Les Johnson was approved to serve another year as the mayor pro-tem. He was nominated by Kathy Wincheski and it was seconded by Cheri Rozell. The motion was approved unanimously.

• The council approved its list of depositories — banks with which it does business — unanimously.

• The council set a committee of the whole meeting for 6 p.m. on Jan. 23 to discuss and provide input into a city attorney contract.

• The council set hearings for a pair of community development block grants, one for a project on North James Street/Legacy Park and the other for the redevelopment of 12 apartment units in downtown. Both hearings were scheduled for Feb. 10.