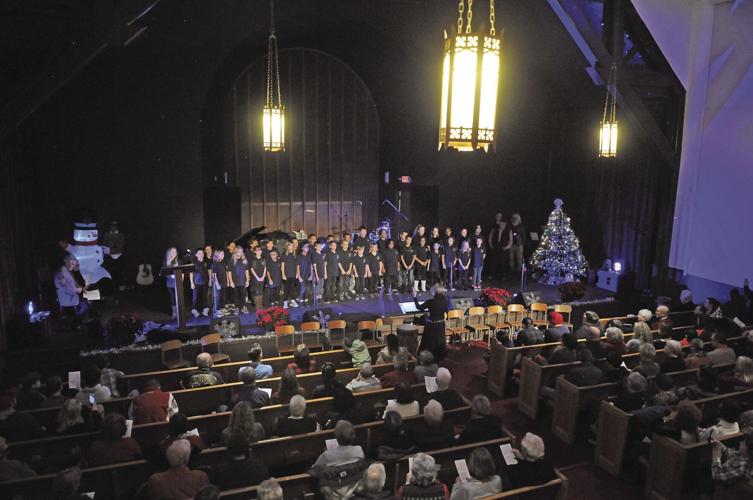 The Baldwin Community Schools Choir performs during “We’ll be Home for the Holidays” in 2018. This year’s concert, set to start at 2 p.m. Sunday, is returning to the Ludington Area Center for the Arts for the first time since the onset of the COVID-19 pandemic.

The Baldwin Community Schools Choir performs during “We’ll be Home for the Holidays” in 2018. This year’s concert, set to start at 2 p.m. Sunday, is returning to the Ludington Area Center for the Arts for the first time since the onset of the COVID-19 pandemic.

For the first time in three years, a Ludington Area Center for the Arts holiday tradition is coming home.

The annual “We’ll be Home for the Holidays” Christmas concert is returning to LACA on Sunday after being held in a virtual format in 2020 and 2021 due to the COVID-19 pandemic.

Organizers are thrilled to bring the holiday tradition back — in person, as intended — to the center at 107 S. Harrison St. in downtown Ludington, according to LACA Executive Director Andrew Skinner.

“We’re really excited this year to actually bring everybody back to the performance hall,” Skinner told the Daily News. “It’s been a long time since everyone has been able to get together and have a concert like this, and we’re just excited to have people come out, support the arts center and support local performers as they spread holiday cheer.”

It will hosted by Sean and Kali Gilbert.

“Each performer will be doing two songs — though we do have a surprise performer as well,” Skinner said.

In addition to music and some on-stage banter from the hosts, LACA will also have light refreshments, cookies, coffee and punch available.

Despite the pause on live concerts, “We’ll be Home for the Holidays” continued during the pandemic with some tweaks to avoid large gatherings and to ensure the safety of artists and viewers.

“In 2020 we asked a number of performers to just do a small recording … of their performances, and then we pieced them all together and made an hour-and-a-half video that we shared on our website and YouTube channel,” Skinner said. “In 2021 we did kind of the same thing. We hired a videographer to record a number of the performances. … She compiled them into four different releases with two performers in each release (which we released) Saturdays from Thanksgiving to Christmas.”

Skinner said LACA learned some lessons about how to engage the public with online events during the hiatus, but a live experience in the arts center’s Performance Hall is preferable.

Skinner said he’s glad it’s now possible to bring back the concert in an in-person capacity.

Before the show, attendees can check out LACA’s Art of Giving Holiday Artist Market in the center’s main gallery.

Sunday is also the last day to place bids for the Festival of Wreaths, Skinner said. Final bids can be placed during an intermission midway though the concert.

“We’ll be Home for the Holidays” will be broadcast live on WLDN and WMLQ by Synergy Media, and the concert will be rebroadcast on Christmas Eve.

A new addition this year is a live-streamed video of the show. Skinner said the video will come out on the LACA website, www.ludingtonartscenter.org, and on its YouTube page and social media channels a few days after the concert “so people can watch it throughout the holiday season.”

“We’ve always done the live broadcast on Synergy radio, with the rebroadcast on Christmas Eve, but having an available full-length multi-camera with different looks will be a new thing. We’re excited about it,” he said.

Skinner encouraged those who haven’t attended the concert in the past to consider checking it out for the first time.

He said it’s LACA’s “way of giving back to the community.”

“The concert in general is just a great way to get everybody in to the holiday spirit with holiday tunes form a number of local performers,” he said.

Though it’s free to attend, Skinner said LACA will be accepting free-will donations during the concert.

'The concert in general is just a great way to get everybody in to the holiday spirit with holiday tunes form a number of local performers.'