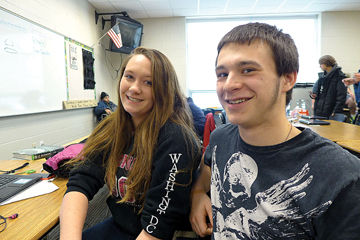 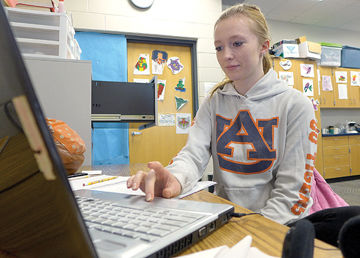 SCOTTVILLE — Many students who attended Journey Junior/Senior High School have returned to their home districts for the 2015/2016 school year, after the alternative education school closed in June of 2015.

“They are making a nice transition,” said Mason County Central Schools (MCC) Superintendent Jeff Mount. “(The move was) at no fault of their own — this was thrust upon them.”

The building they were in was no longer usable as a school as it was not up to standards.

To accommodate those incoming students, MCC created an alternative education classroom. “We’re running at capacity,” said Mount. “We can’t get much bigger.”

The class is comprised of 29 students in grades 7th through 12th. Approximately 60 percent of those students came from Journey, while others were referred from traditional classes.

“We had never thought about having alternative education in-house,” said Mount. “There was MCC or Journey — there was nothing in between.”

“(The closing of Journey) created a mind shift for us.” He said the district developed a plan for credit recovery within the school. “We can do something in the interim,” said Mount.

MCC receives funding through Section 23a of the State School Aid Act, Dropout Recovery Program to operate the alternative classroom. Mount said the 23a grant funds one twelfth of the full-time equated allowance for every month the eligible student makes progress towards graduation.

“(The student’s progress) is the only way we receive funding,” said Mount. He said progress is determined by the online courses the students complete.

“We’re excited to say that the program is successful,” said Mount. He said the program will be continued into the future. “I suspect several students will stay with us through next year.”

Mount said he thinks some students will choose Gateway to Success Academy (G2S), a new charter school designed to service students who are unable to succeed in a traditional classroom. G2S is scheduled to open in fall of 2016.

“It’s all about finding the right fit,” said Mount. “Whether it’s MCC, credit recovery (in the alternative program) or G2S, we will have students trying to find the right fit.”

Hope Goetsch is an 11th grader in the alternative program at MCC. She previously attended Ludington Schools and had considered Journey as an option before it closed.

“I considered it because it was smaller,” said Goetsch. She said she had difficulty focusing in larger classrooms. “This is better to focus — it’s quiet,” she said of the small class at MCC.

“I was very behind at the beginning of this year,” said Goetsch. “Now, I’m almost back on track.” She has been focusing on credit recovery by completing courses through the class’s computer-based, online program called, e2020.

“They have a lot of responsibility to discipline themselves,” said Christina Justice, alternative classroom teacher at MCC. She said students have all courses online, except English, which she teaches face-to-face.

“I was excited to learn that around Christmas time, 95 percent of students had met the goals we set for them,” said Justice. “I am really pleased.”

“It’s been really nice to have Mrs. Justice there to help if there is something I don’t know on the computer,” said Goetsch. She said she struggles with algebra, and Justice will help by working on example problems with her from a book.

Goetsch is planning on going to college after graduation to become a registered nurse or certified nursing assistant. “I might stay on with the (alternative) program — it’s really helped out a lot,” she said. She is also considering G2S or going to the traditional MCC classes.

Although the alternative class is a program of MCC, the students are on a different schedule than other MCC students. Lunch and one hour of gym time are taken separately from the rest of the student body.

“We should be able to be involved with sports or with band,” he said. “We listen to the announcements about sports every day. Why can’t we do it?”

See the fully story in your Weekend print and eEditions of the Ludington Daily News.

Gateway to Success Superintendent Jamie Bandstra will give the Mason County Central Board of Education an update on progress of the new charter school being built on North Scottville Road.  Plans are to have it open and ready for students at the start of the 2016-17 school year.

The board of ed meets at 7 p.m. in the high school library (6:45 p.m. for an organizational meeting.)