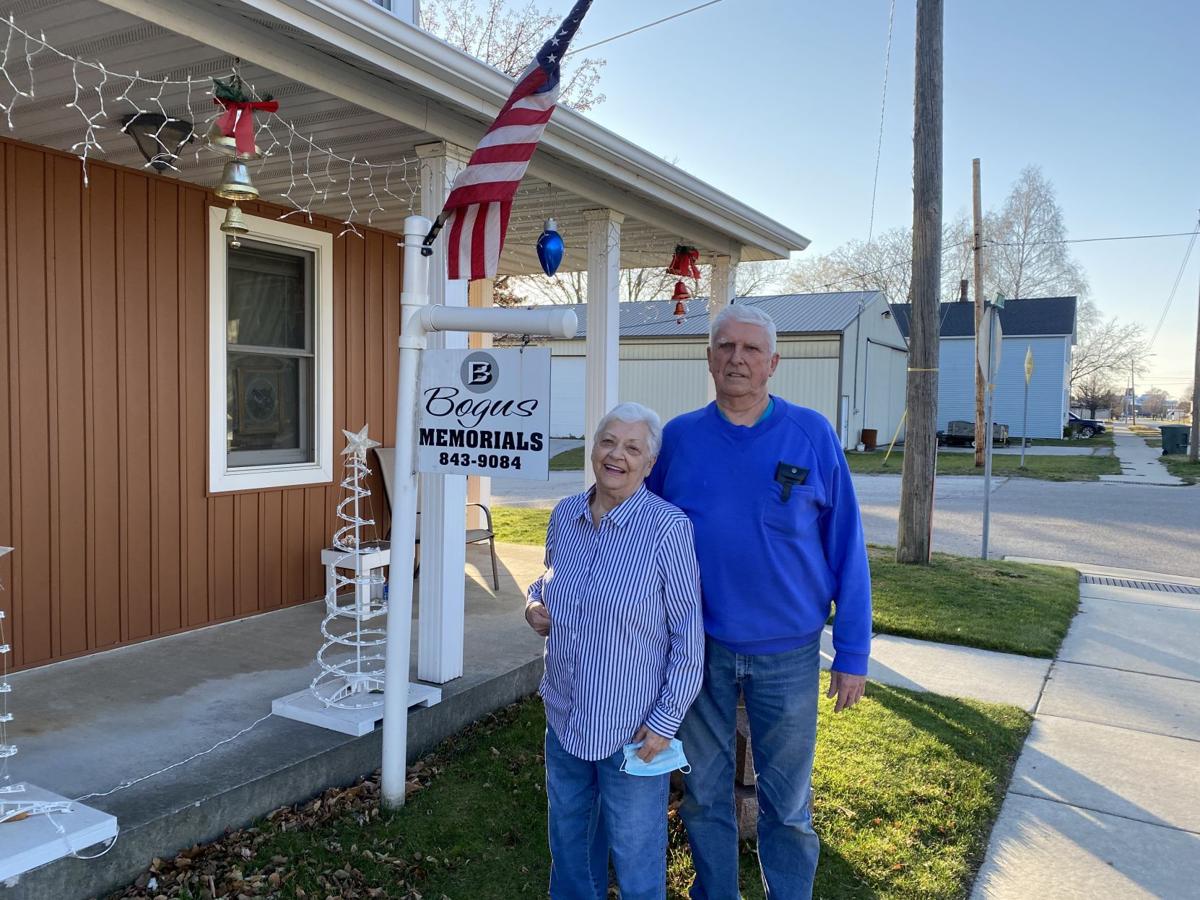 Duane and Joyce Bogus pose in front of Bogus Memorials on Dowland Street in Ludington. After more than 40 years, the business is closing at the end of the year. 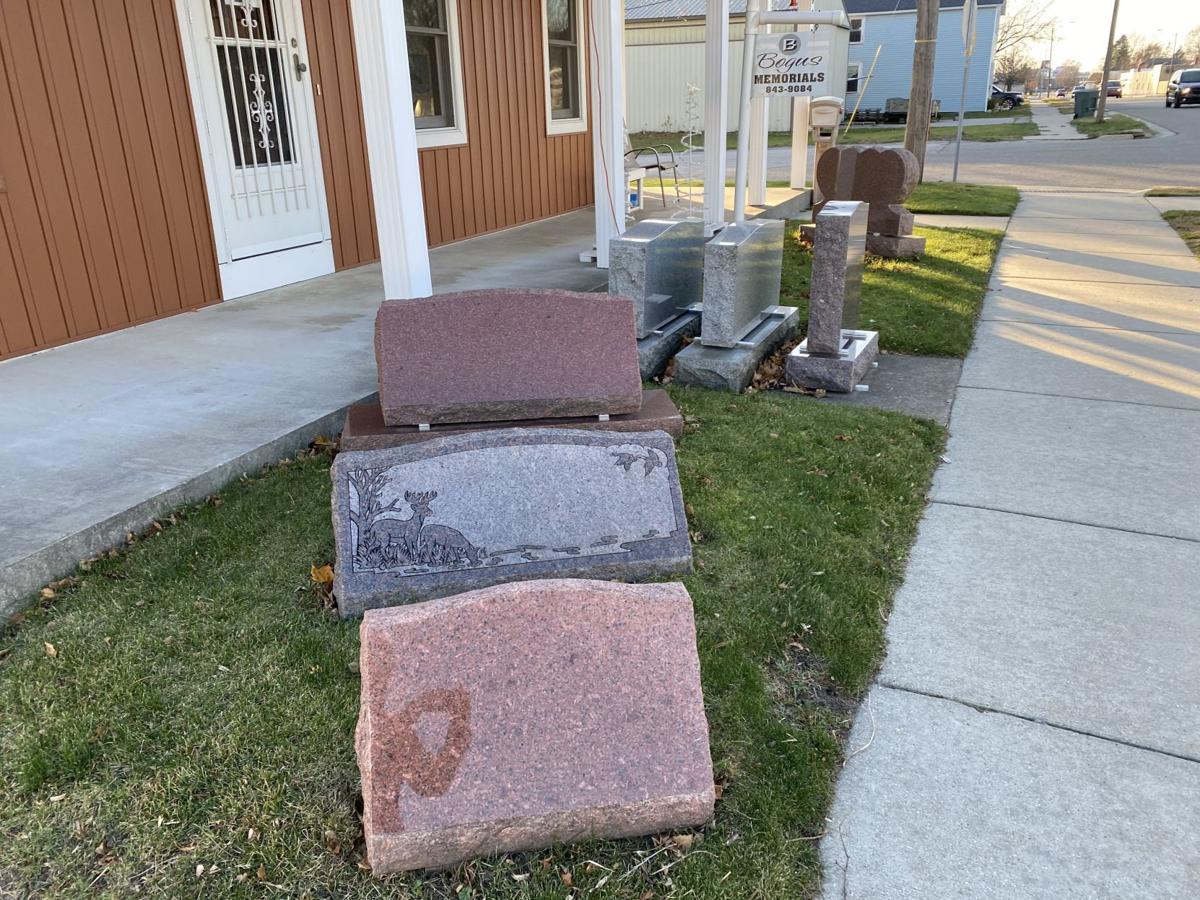 Memorial stones are placed outside the home-based Bogus Memorials on Dowland Street. The business is set to close by Jan. 1.

Duane and Joyce Bogus pose in front of Bogus Memorials on Dowland Street in Ludington. After more than 40 years, the business is closing at the end of the year.

Memorial stones are placed outside the home-based Bogus Memorials on Dowland Street. The business is set to close by Jan. 1.

It’s always been about people for Duane Bogus; it’s why he got into the business of dealing memorials, and it’s what he’ll miss most when he closes his business at the end of the year.

Duane has been operating Bogus Memorials for more than 40 years.

Now, at age 81, Duane said it’s time to move on, with a gentle nudge in that direction from his wife, Joyce, who handles bookkeeping for the home-operated business.

“My family wants me to retire, and I’m getting old,” Duane said, sitting at the dining-room table of his 402 E. Dowland St.

Duane and Joyce have owned the house for 60 years. Soon they’ll be enjoying it simply as a home, rather than a workplace.

“It’s time. I’ve been in it for 41 years, and the family decided for me that I should hang it up,” Duane said.

The work is labor intensive. Though Duane doesn’t carve or letter the memorial stones himself, he does have to move them and place them. It involves making regular trips to Muskegon to pick up heavy stones and markers, trucking them back to Ludington and installing them at various cemeteries.

Duane said he’s been doing it by himself all along. It’s hard to find help, he said.

Despite having a large family — he and Joyce have eight children, 16 grandchildren and 10 great-grandchildren — Duane is not passing the business on. His sons and daughters have their own careers, he said, and some have moved away.

“My kids don’t want the business,” he said. “I offered it to them, and they don’t want it.”

Nor is he selling it — the family name is just too important.

“I have nothing to sell but my name, which would be good for someone starting out, because I’ve built it up quite a bit over the years,” Duane said. “But I don’t need (someone) coming and telling me, in five years, that you’ve run my name in the ground and the business is dead.”

He doesn’t want to run the risk of someone who’s not in the family taking on the business and not living up to the standards he’s set.

“I’m not going to sell the name,” Duane said. “I’m just going to close the doors.”

That name, Bogus Memorials, has been an eye-catcher for visitors to the Ludington area, who get a kick out of the sign in front of the house, and often stop for a closer look.

Duane’s family name is actually Boguszewski, but it was shortened for the sake of simplicity by his parents, and “Bogus” ended up on the birth certificates of Duane and all but one of his siblings.

The name has brought many a curious out-of-towner to the door, and he’s even developed a few customers based on that curiosity.

“People like to stop and take pictures,” he said with a chuckle.

Business has been good, so the closure isn’t due to a lack of interest, nor has the pandemic factored into the decision to close.

In fact, business is booming now, with only a few months left to go.

“Word is getting out that we are going to close, and I think that’s making some (people) come… They want him to take care of them,” Joyce said. “And he’s very good with the customers. He’ll bend over backwards to do whatever they want.”

It’s just time to move on to the next chapter, Duane said.

Through it all, Bogus Memorials has relied on good, old-fashioned word of mouth to market the business. There’s no website or social media presence, and Duane takes all orders either in person or over the phone — a landline.

They don’t even have a computer, let alone smartphones.

“The newest thing we have is a copy machine,” Joyce said.

That method has served them well.

Dealing memorials was originally a “side” business, which Duane got into started around the time he began working as a custodian at the Ludington Area School District.

When he retired from the school, about 20 years ago, memorials became more of a central focus.

He first got into the trade while working with Chadwick Memorials. After parting ways with that business, he contemplated quitting, but he said the funeral directors in the area told him they wanted him to keep it up.

“So, we decided we’d go back into business. I’d just started at the school at that time. It was a sideline, so I just kept it going,” he said. “When I retired, I had something to work with.”

He said he never charged extra for foundations; he considered that his “good deed for the day.” For veterans’ markers, he also never tried to make a profit.

It’s not about the money, and it never has been.

“I’m not doing it for the money. I’m doing it to keep myself busy and give people deals,” Duane said. “I don’t have the business to make a living. I do it because it’s a hobby, and I enjoy doing it. I enjoy meeting people and talking to people.”

Joyce added slyly, “And it gets him out of the house — out from under my feet.”

Duane said it’s always been important to him to make sure customers are happy with what they purchase — whether it’s for themselves, or for a loved one. When people come to him seeking advice, he’ll guide them through the issues they should keep in mind when purchasing a memorial.

For instance, he’ll ask customers which cemetery they’re using, and depending on their answer, he’ll know which trees are located in that area, and what how much polish would be needed to protect the stone and help ward off sap and dirt.

If there are evergreens near the burial site, he might recommend polishing the top of the stone so customers won’t have to scrub it down to keep sap from causing damage.

It’s also important not to rush people, Duane said. When people come to him, and they don’t seem to be ready to let go, he’ll encourage them to take their time, think about what they want most for their loved one, and come back to him when the time is right.

In all his years of hauling memorials to and from Muskegon, and in and out of cemeteries, Duane said he’s only had one accident. He broke his wrist in two places while moving a stone after slipping on a leaf, and he finished the job.

He tells the story with a certain amount of pride.

Duane said he foresees some challenges for the local clientele after he retires, since closing the business will leave a gap in services. There’s only a small handful of other businesses in the area that sell memorials.

He said he’d be happy to help anyone who wishes to start up a similar business.

Duane answered quickly when asked how he felt about the decision to shut down, and it all came back to people.

“I’ll miss the people, the customers,” he said. “If I had the power or muscle or whatever you want to call it, I wouldn’t be closing down shop. I’d work at this until I died.

“It just that it takes a toll on you, just like anything else, and I’m getting older.”

Duane said he’s a bit unsure of how he’ll spend his time once the doors at Bogus Memorials close for good, but he and Joyce said they have no plans to leave Ludington. They love the area, they love their home and they’re looking forward to spending more time together and with their grandkids.