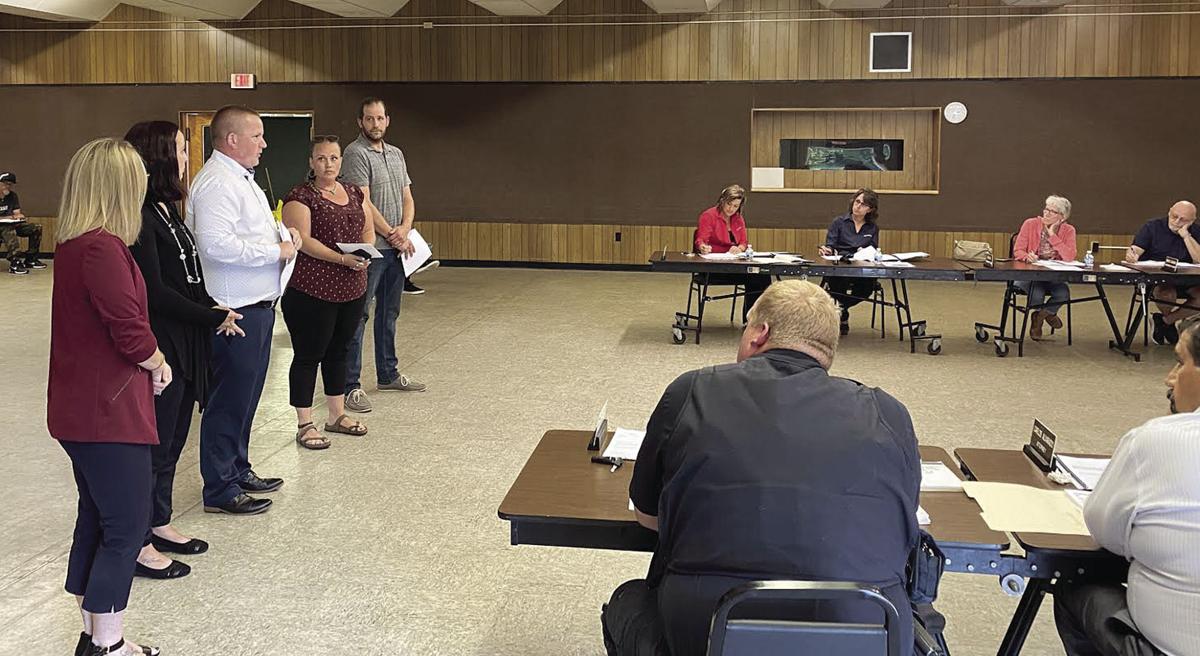 Andrew and Samantha Schnitker, Justin and Katie Durga, and Jordan and Sara Durga of Left Coast Apothecary LLC, speak to the Scottville City Commission Monday about their proposal to open a marijuana provisioning center on South Main Street. 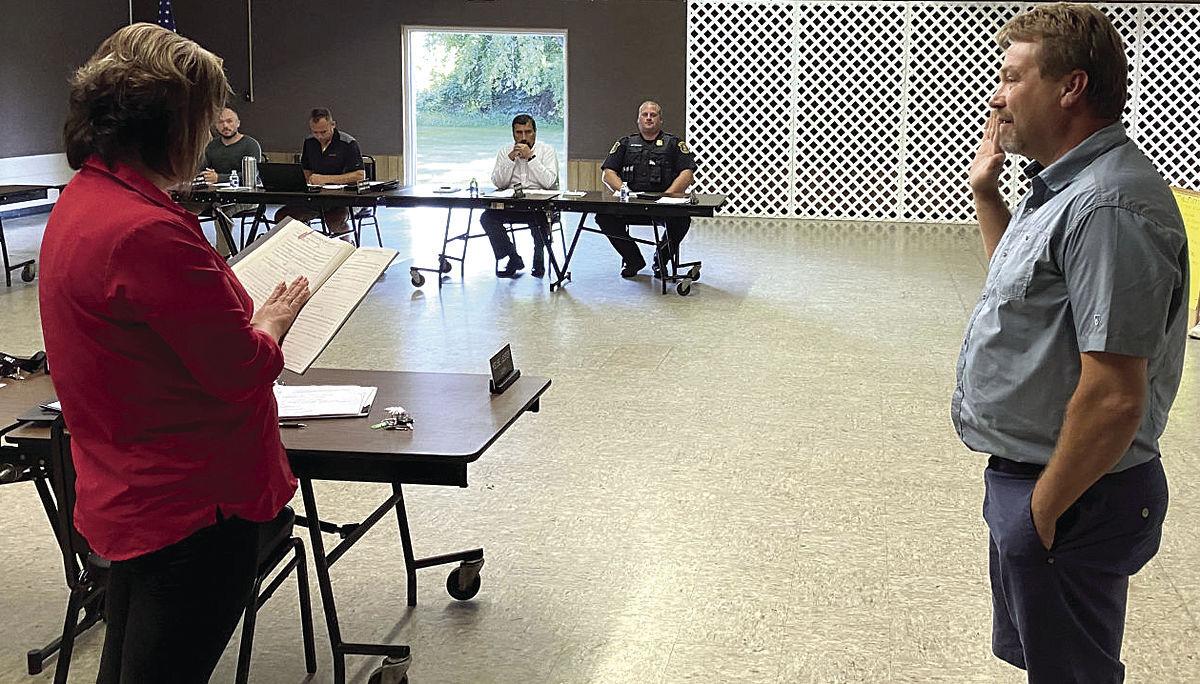 Andrew and Samantha Schnitker, Justin and Katie Durga, and Jordan and Sara Durga of Left Coast Apothecary LLC, speak to the Scottville City Commission Monday about their proposal to open a marijuana provisioning center on South Main Street.

SCOTTVILLE — A business hoping to open a cannabis provisioning center in Scottville is asking for the city to reconsider its existing policy prohibition of marijuana facilities within the city limits.

On Monday, during the city commission’s regular meeting at Optimist Hall, representatives from Left Coast Apothecary LLC gave a brief presentation to the commission, with a business proposal for a facility at 143 S. Main St.

Andrew Schnitker and Jordan Durga, two of the representatives from Left Coast, spoke to the commission about the goals of the business.

“What we want to do is open an adult-use, 21-and-up-only cannabis provisioning retail store,” Schnitker said. “Scottville would be a wonderful home for Left Coast Apothecary.”

Schnitker said the business would ensure being “100-percent in compliance of state laws and local ordinances,” and emphasized that the proposed location was more than 1,000 feet from a school, and was in compliance with all other rules for a provisioning center.

“We’d just love to make Scottville a home for our business,” Schnitker said. “We really do believe that ‘cannabusiness’ is here to stay, one way or the other, and we see strong benefits that our community could experience locally.”

Durga outlined some of the financial benefits that would come if the proposal was approved and the city’s opt-out ordinance was reversed. He added that the business would also give a boost to the downtown area.

“(This) should benefit all the businesses in the city,” he said. “There’s a lot of benefits, financially, economically … We want to partner with Scottville, (and) be the first in the area (to open a provisioning center).”

Durga said the tax benefits would be a boon to the city, the county, the state, school aid and transportation.

In winter and spring of 2019, Scottville formally opted out of allowing marijuana facilities to operate within the city limits, passing a two-part ordinance that prohibited marijuana businesses from operating within the city, and prohibited the sale and public use of marijuana and establishing fines for violating either ordinance.

Resident Tara Perez spoke up during public comment to voice her support of the proposal, and to urge the city to consider it.

“Our business has gone away, pretty much,” Perez said. “People want marijuana businesses here. We have an amazing place to support that, and with the tourist industry in Ludington, it would be really foolish not to act on that.

“This town is continuously falling apart in front of our eyes. The public wants this. We’re in support, 100 percent.”

Mayor Marcy Spencer stated that the proposal would have to be heard by the planning commission at a later date.

Seiter was chosen over two other candidates who submitted letters of interest for the position — Eric Thue and Perez.

Commissioner Rob Alway encouraged both Thue and Perez to continue to seek openings on city boards and committees as they become available.

All commissioners thanked the applicants for their interest and agreed with Alway that they should continue to seek out opportunities to serve in other capacities.

Spencer stated that the City of Scottville had received a legal summons prior to the meeting.

“We were handed a summons for the City of Scottville, and I think some of the individual employees got that as well,” Spencer said.

She did not elaborate on the nature of the summons, but after the meeting, City Manager Jim Newkirk told the Daily News that it came form Ludington resident Tom Rotta just before the meeting started.

Newkirk said he had not yet had a chance to closely look at the documents, and did not know exactly what it pertained to.

During a public comment period, Rotta drew commissioners’ attention to the summons.

“Tonight you will find yourselves with a summons and complaint tonight, concerning your role in intentional, corrupt acts you took part in,” Rotta stated.

Rotta brought up several issues he’s discussed before the commission on a fairly regular basis since late 2020, when an ad-hoc investigative committee was formed to look into the conduct of then-city manager Courtney Magaluk. He said the committee had convened in private without keeping minutes, he said the commission had silenced him twice during a meeting held via Zoom in March and he alluded to several other allegations though he did not specify what issues were pointed out in the summons.

A planned second reading of a proposal to amend the city’s policy for keeping chickens was removed from the agenda at the start of Monday’s meeting. Mayor Marcy Spencer said the item would be revisited at a later date.