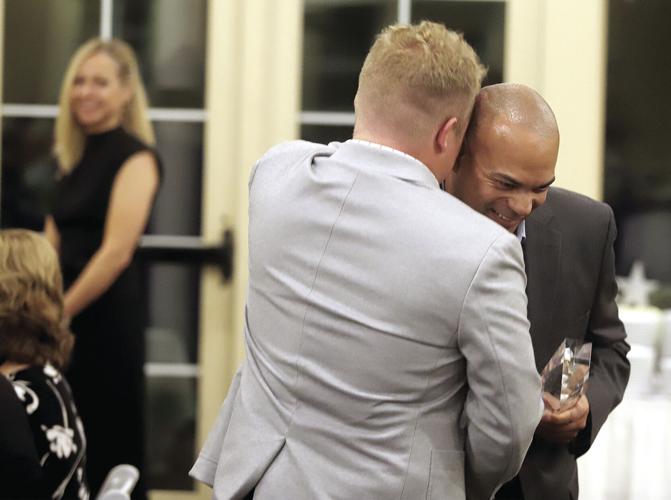 Chris Nicholas of WMOM-FM gets congratulated by Kyle Gurzynski after winning the small business award during Thursday’s chamber awards dinner. 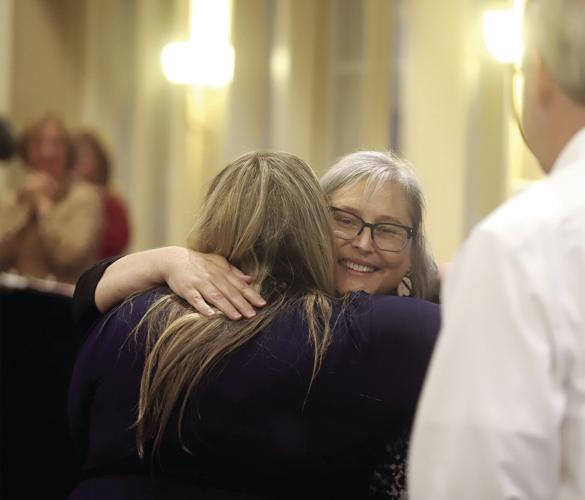 Patricia Ezdebski gets a hug from Brandy Miller as Tom looks on during the chamber awards. The two were honored with the community service award for their work with the Childhood Cancer Campaign. 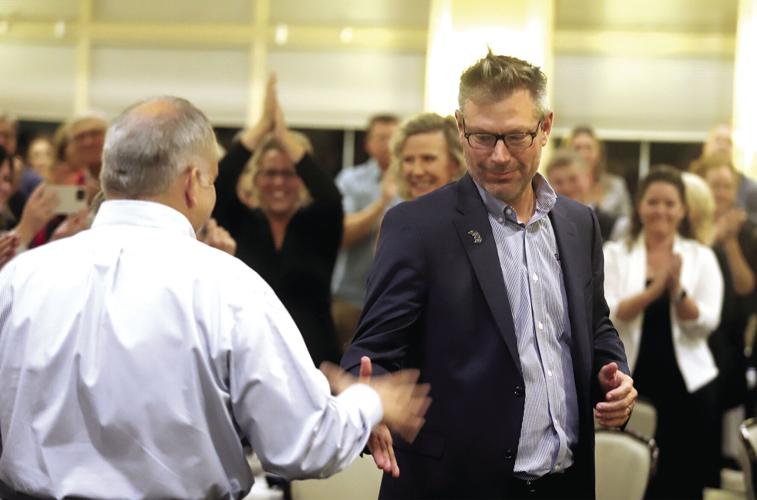 Adam Johnson gets congratulated after Safe Harbor Credit Union was honored with the business of the year.

Chris Nicholas of WMOM-FM gets congratulated by Kyle Gurzynski after winning the small business award during Thursday’s chamber awards dinner.

Patricia Ezdebski gets a hug from Brandy Miller as Tom looks on during the chamber awards. The two were honored with the community service award for their work with the Childhood Cancer Campaign.

Adam Johnson gets congratulated after Safe Harbor Credit Union was honored with the business of the year.

“What a privilege it is to recognize these purposeful and community-minded businesses and entrepreneurs,” said President/CEO of the Chamber of Commerce Brandy Miller. “It is such an exciting time of year to look back and see what we have accomplished in the Mason County community and honor the skilled, determined men and women who made it all happen.”

BUSINESS OF THE YEAR

In 2021, the business moved into its new location on U.S. 10 to better accommodate its growing customers.

Johnson said he was honored the credit union was nominated for business of the year.

To be nominated alongside House of Flavors, one of the larger employers in town, who do so much for our community, that was an honor in itself, he said.

“It is an honor, especially that it is our 70th anniversary this year, and it was nice to reward the staff for all of the hard work they have done, especially during COVID, which was not very easy,” Johnson said. “Our staff has done a great job, and to grow over that period of time, (it proves) that our employees are doing a great job.”

SMALL BUSINESS OF THE YEAR

The Small Business of the Year award went to WMOM-FM for its ability to demonstrate excellence in business practices through sales, quality of service, customer service, leadership and community involvement.

Nicholas said when he first heard of the nomination, he looked at the other candidates nominated and he was honored with the nomination but never figured the station would win.

“When you look at these other businesses they do so much,” Nicholas said. “I was just so humbled to be nominated, especially during a time of our early business (WMOM opened its doors in 2019).

“We knew we were going to make it when Kyle Gurzynski walked into my office and said, ‘Chris I have been waiting to see if you were going to stick,’” he said. “Pat Patterson said, ‘Chris you have moved to the area.’ Yeah, this is home.”

The award recognizes an individual or group for their accomplishments in offering service to the community on a volunteer basis. Tom and Patricia Ezdebski were honored for their tireless work on the Childhood Cancer Campaign, a volunteer organization that supports families with a child battling cancer.

The two are credited with working nights, weekends and special events to raise funds for the campaign with 100 percent of monies raised going directly to families in Mason County.

The couple have also spearheaded efforts to hold the #WillStrong soccer tournament, in memory of Will Flewelling, for two years. This tournament has raised thousands each year, and the event will be held as an annual event. The two also started collecting returnable cans during the pandemic, which has led to more than $45,000 raised for the campaign.

The couple spend countless hours volunteering in the campaign but also within the community at large. Tom has coached many youth sports teams and he was recently honored as the Michigan District Optimist of the Year.

“We have had the honor and privilege to be the conduit for this program,” Patricia said. “Back in 2004 when we started it, we had a sense of where it would go but we are thrilled that we have come to this night to serve and accept this award on behalf of families.”

Ezdebski said this is not the couple’s award, this is the community’s award.

“The community decided… with us that it was going to be important to take care of families who are going through the worst possible thing that any parent could go through,” she said.

Tom said everybody that was nominated is very deserving.

“We are extremely honored. We have been nominated before. To actually win is an incredible feeling, that is not why we do it. The Childhood Cancer Campaign is not us, it is the whole community, without them it does not work, we are grateful for everybody,” he said.

Other nominees for the community service award were Communities Overcoming Violent Encounters (COVE), Friends of the Ludington State Park, and TWIG (Together We Inspire Generosity) Hospital Auxiliary.

Also honored during the ceremony were the Future Five award winners for the year. The Future Five class of 2022 were chosen for influencing the growth, prosperity and quality of life in Mason County and demonstrating the ability to positively impact the area in the future through professionalism accomplishment and community involvement, according to the chamber. These individuals must be age 21-40 on or before Dec. 31, 2021.

The Future Five classes of 2019 and 2021 where also honored at the dinner on Thursday.

Are you taking fewer leisure trips with the higher gas prices?