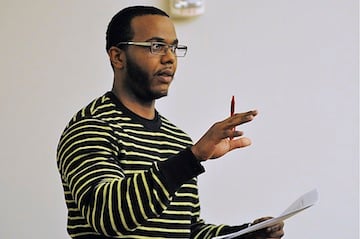 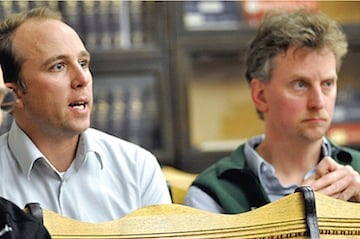 Adam Smith, a lawyer with Consumers Energy, Save and closeand Bill Schoenlein, who among his other duties, manages Lake Winds Energy Park for Consumers address the Mason County Planning Commission Tuesday, April 1, 2014

Adam Smith, a lawyer with Consumers Energy, Save and closeand Bill Schoenlein, who among his other duties, manages Lake Winds Energy Park for Consumers address the Mason County Planning Commission Tuesday, April 1, 2014

After many weeks of discussion, Consumers Energy and the Mason County Planning Commission are nearing agreement on how a second round of testing of sound from selected sites at the Lake Winds Energy Park should proceed.

Tuesday night at the Mason County Courthouse, a four-page document “comments on mitigation testing protocol, Lake Winds Energy Park,” was reviewed, paragraph by paragraph at times, sentence by sentence at times and right down to a phrase or an individual word at other times.

Ultimately, Consumers Energy, which owns and operates the 100 megawatt, 56-turbine project in Riverton and Summit townships, and the planning commission, working off a document from HGC Engineering, its hired sound consultant from Missassuga, Ontario, narrowed differences down to three items — items they were close on and that the county will ask HGC about.

The hope is that next Tuesday at a special meeting, Consumers will present its proposed sound mitigation plan reflecting the changes made in recent meetings and the three items remaining to be clarified to the planners for potential approval. If the planning commission accepts and approves the plan, then the Mason County Board of Commissioners will have to approve a contract for the testing by HGC, perhaps as early as at its April 15 meeting.

The new testing will determine if the proposed modified operations of turbines — ruled after spring 2013 testing to be out of compliance with the county ordinance setting the maximum sound from a turbine at the property line of non-pooled parcels to be 45 decibels — reduces the sounds from them to below that level.

The planning commission, HGC and Consumers are in agreement that the testing should be done in April and May as it was last year so the comparisons are under like conditions. Those times originally were picked because trees wouldn’t yet be in full leaf and ambient sound levels would be lower, potentially giving a more accurate reading of how loud the turbines are.

“We’re working off a memo,” Mary Reilly, Mason County zoning and building administrator, told the planners. Once all details in that memo are agreed upon, Consumers will write its mitigation plan so to describe the testing be done in the manner agreed upon.

It was noted that this round of tests is being done to determine if compliance can be accomplished by modified operations of the turbines. In general, the sites found to be too noisy will have offending turbines limited in the amount of power they can produce. By operating the Vestas turbines at reduced capacity, Consumers believes it can reduce their noise output to meet the 45 decibel limit, which it still disagrees it has exceeded. That matter ultimately will be settled in court, but a request by Consumers to delay the mitigation plan until after the case is ruled upon was denied earlier this year by Circuit Court Judge Richard Cooper.

Sticking points for now include the intervals for sound testing. HGC wants the data provided in 10-second intervals to reduce the possibility of extraneous noise such as a dog barking from affecting the data. Consumers says it prefers 30-second intervals and has asked the county to ask HGC if it has done 10-second intervals in tests of other wind parks and, if so, how does it accomplish that administratively.

There is also concern from Consumers over wording about testing the nearest turbine. Its project engineer, Cowin Holmes, suggested adding two words “of those” to the sentence in front of “turbine.” Some commissioners and later members of the public expressed concerns about what adding those words might mean for the county to extrapolate data gleaned from this test to other similar sites in Lake Winds. The question was among those being forwarded to HGC for its advice about the significance of adding those words. HGC will also be asked if wind direction is a factor that should be considered when referring to “nearest” turbines.

A third point concerns site 5 that was tested last year, but had its test results voided because some of the turbines near it stopped operating during the test. That site will be tested in an unmitigated mode to determine if it is in or out of compliance. A resident later asked if it will be tested a second time in the event it is found to be in non-compliance in the upcoming test.

“I think we’re close,” Dennis Dunlap, planning commission chair, said. “Time is of the essense. Spring is coming, the peepers are coming, farm activity is coming.

Holmes agreed, but said so far the document is only a memo among Consumers Energy, the planning commission and HGC.

Commissioner Chuck Lange asked if wording changes suggested by Consumers could cause difficulties for the county in checking compliance elsewhere in the park.

Holmes replied the zoning ordinance has a means for additional testing. “We’ve already agreed to these protocols, so the process would be more streamlined,” he said.

During public comment later, Riverton resident Cary Shineldecker, a leading critic of Lake Winds, urged the commission to be cautious not to agree to anything that would cause any further testing to follow the same process used so far — a process that has included months of meetings and a challenge in court. He said nobody wants to go through that again.

Dunlap said time is of the essence.

“We have a window to have comparable conditions and we want to get this thing moving forward and we want to compare apples to apples or we will have different conditions. I would stress we move very quickly.”

Commissioner Tom Hopper said “I see no reason to stray too far from what HGC recommended for us.”

“We appreciate the work effort by HGC and Consumers and hopefully we can get in the field soon,” he said.

Reilly said a location for the next meeting will be determined and noted on the county’s web site.

Several other members of the public added comments at the end of the meeting.