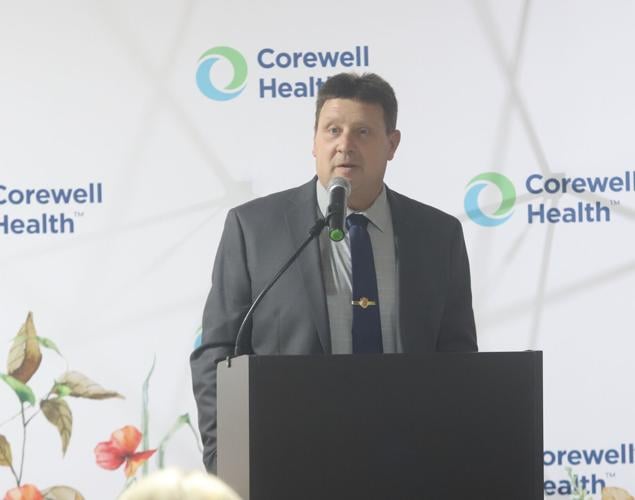 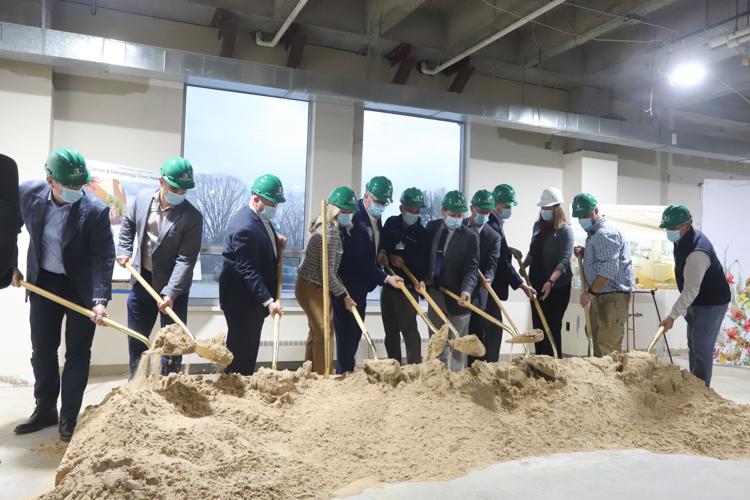 The ceremony was held indoors — to the delight of the hundreds of people in attendance, considering the chilly winds and intermittent snowfall outside — in the hospital’s former emergency room area.

Corewell Health leaders, hospital staff and community members filed into the space to hear about the project in a room filled with indicators of impending construction — pillars, bare floors, tarp partitions and easels with renderings of what’s to come.

Several Corewell Health officials spoke during the ceremony, including Drew Dostal, Corewell Health Ludington Hospital president, who said the project has been “a long time in the making.”

“This $4.9 million expansion is the first major expansion we’ve been able to do since the 2019 completion of the family birthing center,” Dostal said. “That project is amazing, and I expect this to follow along the same lines.”

Dostal said the hospital is “deeply committed” to cancer care in the area.

“It’s long been our goal to have hospital-based cancer services in a state-of-the-art facility that will provide lifesaving medical treatment and additional amenities … for those experiencing cancer diagnoses,” he said.

It’s not just the cancer and hematology center that’s getting attention as part of the project. Patient rooms are also getting a much-needed upgrade.

“Not only will we be kicking off the cancer center project, but we’re also doing inpatient renovations as well, which will bring brand new spaces for ICU and CCU.”

The renovations will bring private bathrooms and showers to inpatient rooms.

“We haven’t had showers in any of our rooms ever, so this will be a first,” Dostal said.

Elmouchi said Corewell Health puts extensive thought and care into its renovation projects throughout the region, and that the improvements to the Ludington hospital topped the list when evaluating facilities in need of upgrades.

The project is the “first among many,” he said.

Elmouchi said once the work is completed, the facility will provide more space and more options to local patients seeking cancer treatment.

Barbara Schmidtman, executive director of cancer services, said that by the time the new cancer and hematology center is open, it will boast about 1,400 more square feet than the hospital’s current facility. She said the center will also offer acupuncture and massage for people who want to weave more “holistic” options into their treatment plans.

Schmidtman said the facility will have added space for family members to be present for their loved ones’ treatment in an “inviting space” for lifesaving medicine. She added that the center will also be in an ideal spot to maximize efficiency of medication transportation.

Corewell Health Ludington Hospital Foundation chair Scott Smith said Wednesday was a “pretty special day,” and added that the foundation’s board is “super excited” about a project it could “get the community to embrace.”

He said $1.6 million of the $4.9 million for the project came from local community donations.

“That’s amazing,” he said. “I don’t know that we’ve ever had that much since I’ve been with the foundation.”

Construction for both the new cancer and hematology center and the renovated inpatient rooms is set to begin in January, with the cancer center expected to be finished by fall 2023.

The inpatient rooms should be completed by fall 2024, according to Patricia Ezdebski, marketing and communications director for the hospital.

“This is just the first step of a big journey,” Dostal told attendees and donors.