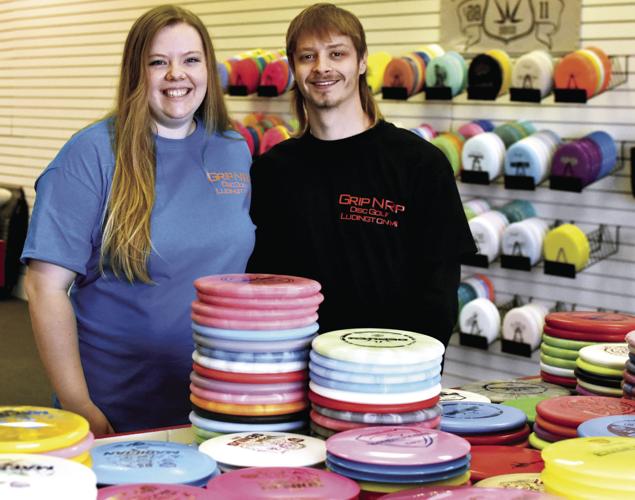 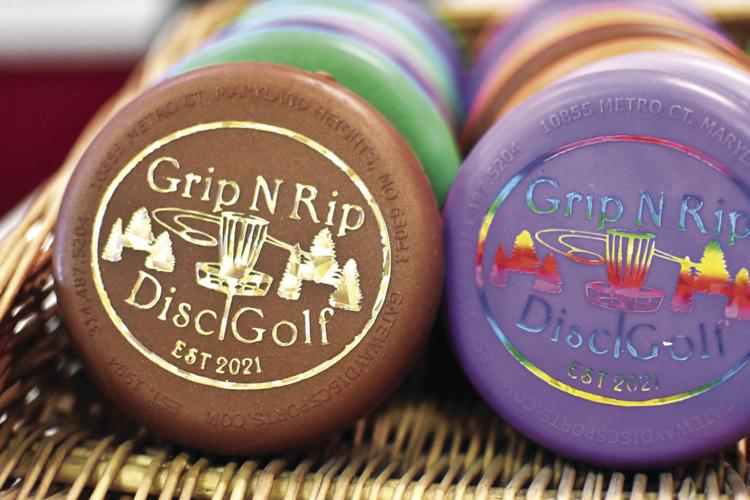 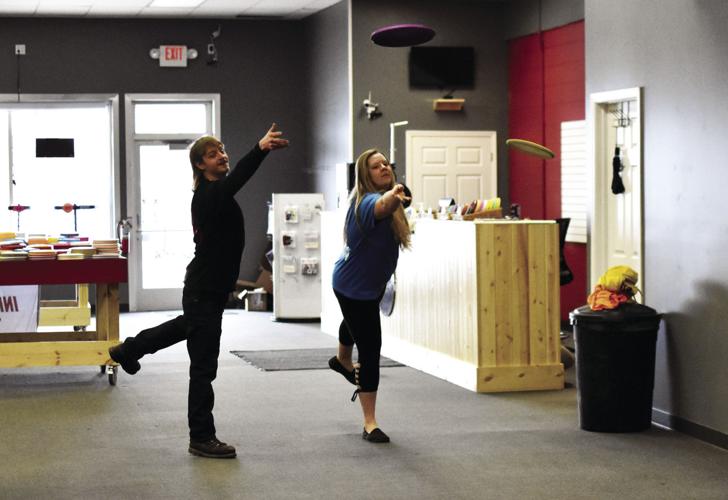 Tyler Martinsen and Kayleen Moffitt demonstrate what the disc golf practice area will look like in the near future at Grip N Rip. The plan is to use one of the rooms in the store to build an obstacle course.

Tyler Martinsen and Kayleen Moffitt demonstrate what the disc golf practice area will look like in the near future at Grip N Rip. The plan is to use one of the rooms in the store to build an obstacle course.

PERE MARQUETTE TWP. — Disc golf has recently grown in popularity, not just in Mason County, but around the nation, according to Tyler Martinsen and Kayleen Moffitt, co-owners of Grip N Rip Disc Golf.

Martinsen and Moffitt said the pandemic has had a lot to do with the increased popularity of the sport, making it the perfect time to open their doors at 5770 U.S. 10.

“The sport has grown tremendously in the past year,” Martinsen said. “It’s the largest jump they’ve seen in the sport since it started. Not having anything else to do, (people) looked for a hobby and disc golf is a sport where you... can buy $30 in discs and go play a whole round.”

“The amount of people playing has tripled,” Moffitt said.

The store has discs of every size and color, as well as bags and carts. They expect to bring in more options as supplies become available. Some of the larger retailers have been low on stock because of the surge in interest.

“We are aiming to be a one-stop-shop disc golf pro store, carrying anything you can think of that’s related to disc golf,” Moffitt said.

There are 14 disc golf courses, public and private, in Mason County — all within a 25-mile radius. The state championship is also held in Mason County using several of the local courses.

Martinsen first got into disc golf when he graduated high school in 2011. He met Moffitt in 2015, and introduced her to the sport.

“We found that it was something we liked doing together, and it was good exercise,” Moffitt said.

He competes in tournaments regularly and this will be her first year.

“I’m pretty competitive,” he said, adding that the competition element is one of the things he likes most about the sport.

Moffitt loves the exercise aspect and that she can see how she improves each year.

She said it’s rare for her to see other women in disc golf. One of her goals is to help change that.

“(I want) to be that person that women can come to and ask questions that they might not be comfortable asking other people,” she said.

They both enjoy the courses at the Pump Storage Facility in Pere Marquette Township — where Grip N Rip sponsored a hole on the Beast course — and at West Shore Community College.

“Hopefully we can continue to grow the sport around the county,” Martinsen said.

For two years, they discussed starting up a local store just for disc golf. The closest store is in Muskegon.

When the coronavirus pandemic hit, they had to put their vision on hold temporarily.

“Finally, we decided to just apply through the state. We said if it didn’t get approved, it wasn’t meant to be. But we got approved,” Moffitt said.

They want to start leagues and host a tournament.

“We want to have a putting league for men and women,” Moffitt said.

They have big plans for the store.

Though the sport can technically be played year-round, Michigan winters can make it difficult. That’s why Moffitt and Martinsen want to make the most of what the building has to offer.

“We looked at a lot of different buildings. This one, the landlord was nice and helpful, it’s three times the bigger than the other places and the price was right. It was the first one we walked into and said, ‘We can see where this can go,’” Moffitt said.

The store, located in the shopping plaza west of North Jebavy Drive, has space for an indoor putting range.

“We’re getting fake trees and putting them on wheels so you can create your own obstacle course,” Moffitt said.

So far, they’ve added a bathroom, repainted and put boards on the walls for displays.

“We’re excited. It’s finally starting to look like a store,” she said.

The goal is to have something for everyone.

“We want to accommodate everyone. We have apparel, a dog line, a kids’ line and a senior’s line,” Moffitt said.

The couple has two dogs, Luna and Lincoln, who also enjoy disc golf.

“Luna just likes to play in the dirt when we go disc golfing. Lincoln actually waits his turn. He know what order we go in. He’ll sit by the tee pad, wait for us to throw and then take off because he know it’s his turn,” she said.

“He knows which disc is his,” Martinsen said. “He’s my secret weapon. I throw the disc and he brings it back, and I can throw it again.”

The store has been open for a short time. They moved into the building in early February.

They want to make it a full-time operation with employees. But for now, friends and family have volunteered to fill in. Moffitt and Martinsen said they are very grateful for that.

“We’ve received awesome feedback from the community, and we weren’t expecting that,” Moffitt said. “We feel like everyone is getting excited.”