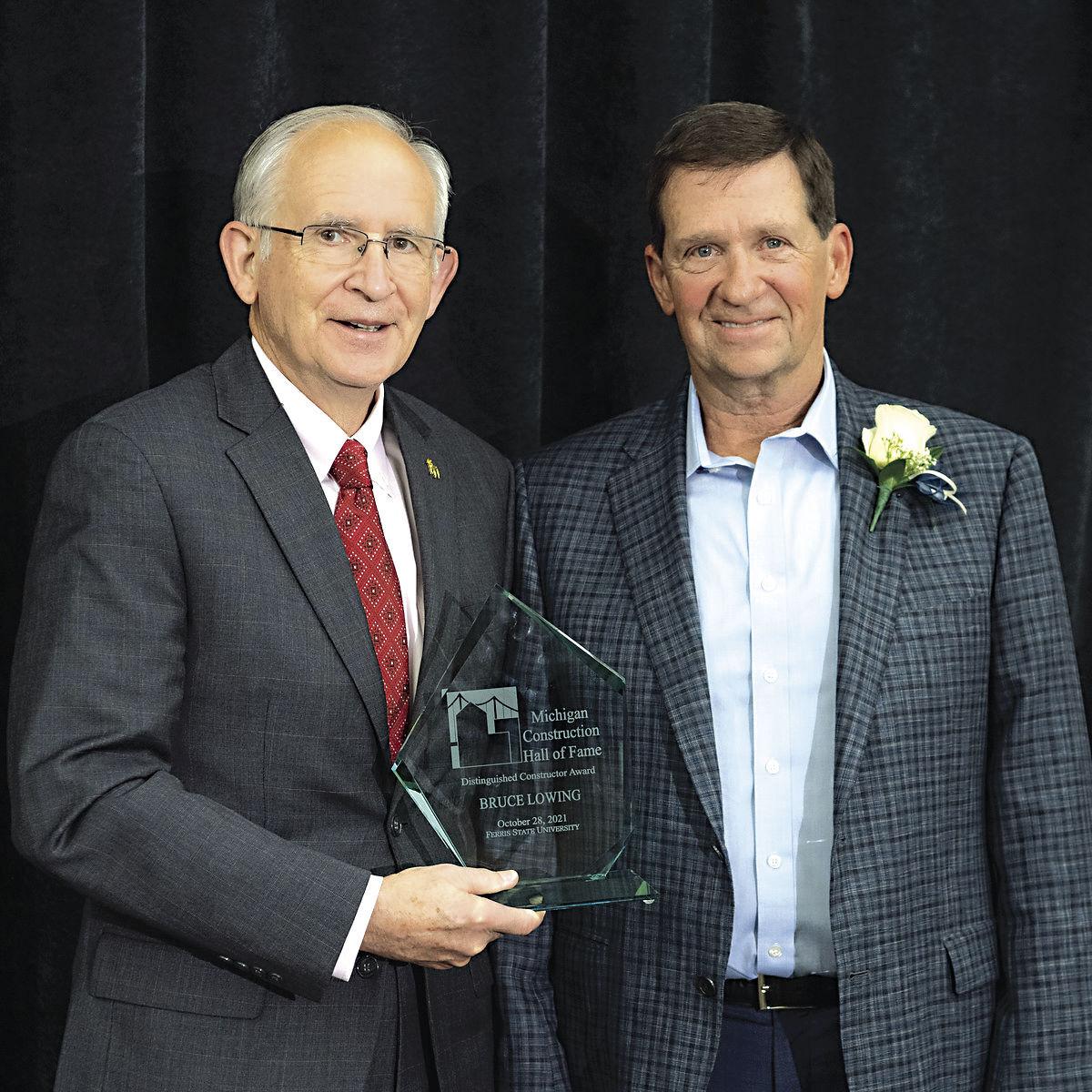 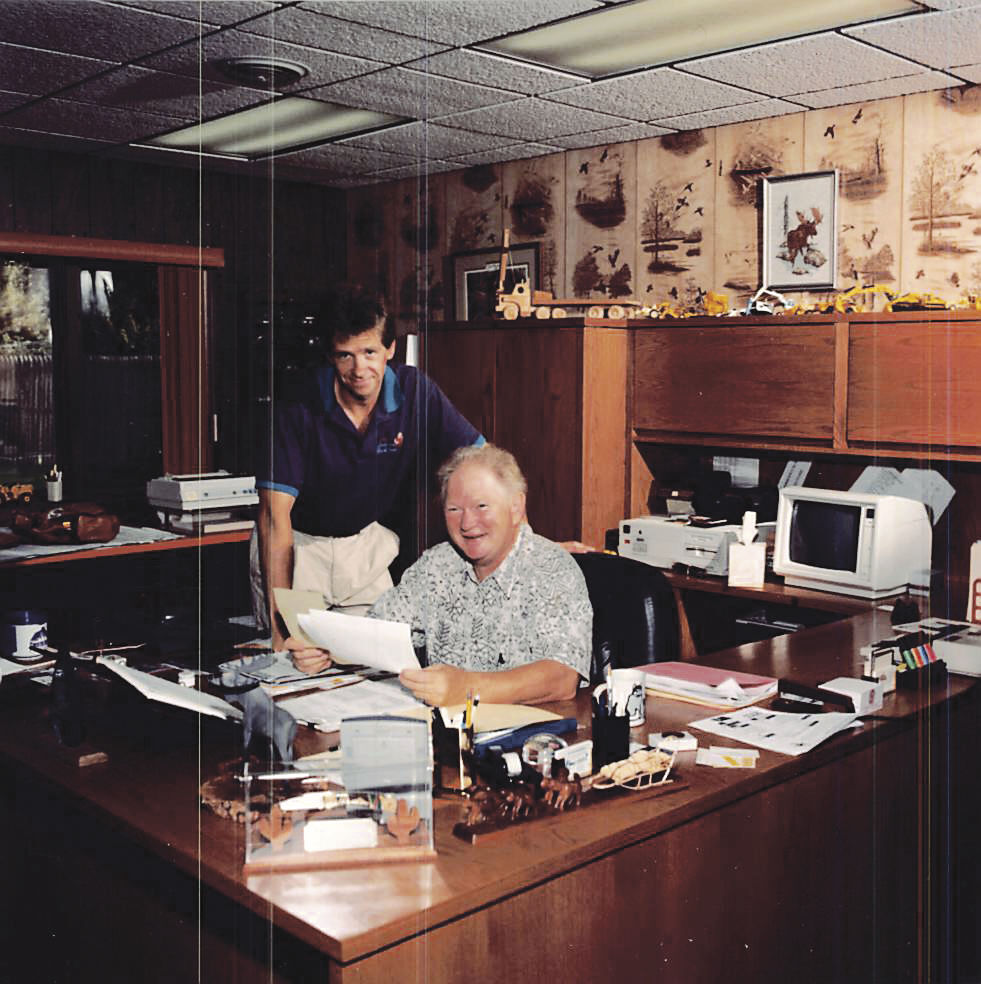 Bruce Lowing stands next to Al Hardman, founder of Hardman Construction. Lowing was recently inducted into the Michigan Construction Hall of Fame.

Bruce Lowing stands next to Al Hardman, founder of Hardman Construction. Lowing was recently inducted into the Michigan Construction Hall of Fame.

Two weeks into a college internship for Hardman Construction, Bruce Lowing met its owner, Al Hardman. Working for the Ludington company on a job in the Upper Peninsula, Lowing asked Hardman why he had chosen to hire him.

“You know,” Hardman responded, “last year we had this guy that had a 3.8 grade point average, and he wasn’t worth a darn. We figured we’d try something different this year.”

Lowing may not have had that high of a GPA. But that didn’t keep him from spending the next few decades rising to president and co-owner of Hardman’s company.

And on Oct. 28, Lowing’s nearly 40-year construction career was commemorated with his induction into the Michigan Construction Hall of Fame at Ferris State University.

“The construction industry was great to me,” Lowing told the Daily News. “I have no complaints.”

Lowing and others bought the company in 1987, and Al Hardman made him its president in 1997.

In his induction, Lowing, 64, was honored for doing whatever he needed to get the job done. Marty Gamble, vice president of geotechnical services at Hardman, said Lowing had a “pretty famous saying” that summed up his mindset.

That saying went: “God takes care of fools and drunks, and you ain’t no drunk.”

“It was just his way of saying … we took on the biggest challenges,” Gamble said. “We still continue to do that to this day.”

Hardman Construction specializes in bridge-building and geotechnical construction, which works with underground materials. In the Ludington area, the company built Harbor View Marina and the Jebavy Road bridge over the Lincoln River, Lowing said.

The company was involved in earth retention in the early phases of Little Caesars Arena and built the M-231 bridge over the Grand River, one of the longest in Michigan at 3,709 feet.

Lowing was a “great mentor,” willing to help with everything, even down to a personal level, said Project Manager Dave DeClerck, whom Lowing hired in 2009.

“Bruce had his hands in everything,” DeClerck said, adding later, “He became the guy you could count on.”

“He told you the way it was,” Gamble said, and he “did not let small stuff get in the way.”

Both of those characteristics emerged once when DeClerck was bickering over a job with Consumers Energy. They were “fighting over some dollars,” DeClerck said, and Lowing “came down and he tore my butt out.”

“It was just a silly reason to fight over dollars,” DeClerck said. “Bruce’s thing was he could always make things go away with a little bit of money.”

Lowing’s induction also honored his leadership in three industry associations. He served as president of Associated Underground Contractors and the Michigan Road Builders Association. When those groups merged into the Michigan Infrastructure and Transportation Association, he became president of that, too.

In those organizations, he lobbied the federal and state governments on behalf of the heavy construction industry. In the process, he attended all kinds of social and business functions, making connections that benefit the company to this day.

“It’s not necessarily what you know, it’s who you know,” Lowing said after an afternoon on a Florida golf course.

He has a place in Florida, but still has a home on the Ludington lakeshore. And though he stopped working full-time at Hardman in 2018, he will remain a consultant with the company through the end of the year.

Even after he’s free and clear of the company, he said he’s far from putting it all behind him forever.

“I don’t think I’ll ever stop talking to those guys,” Lowing said.