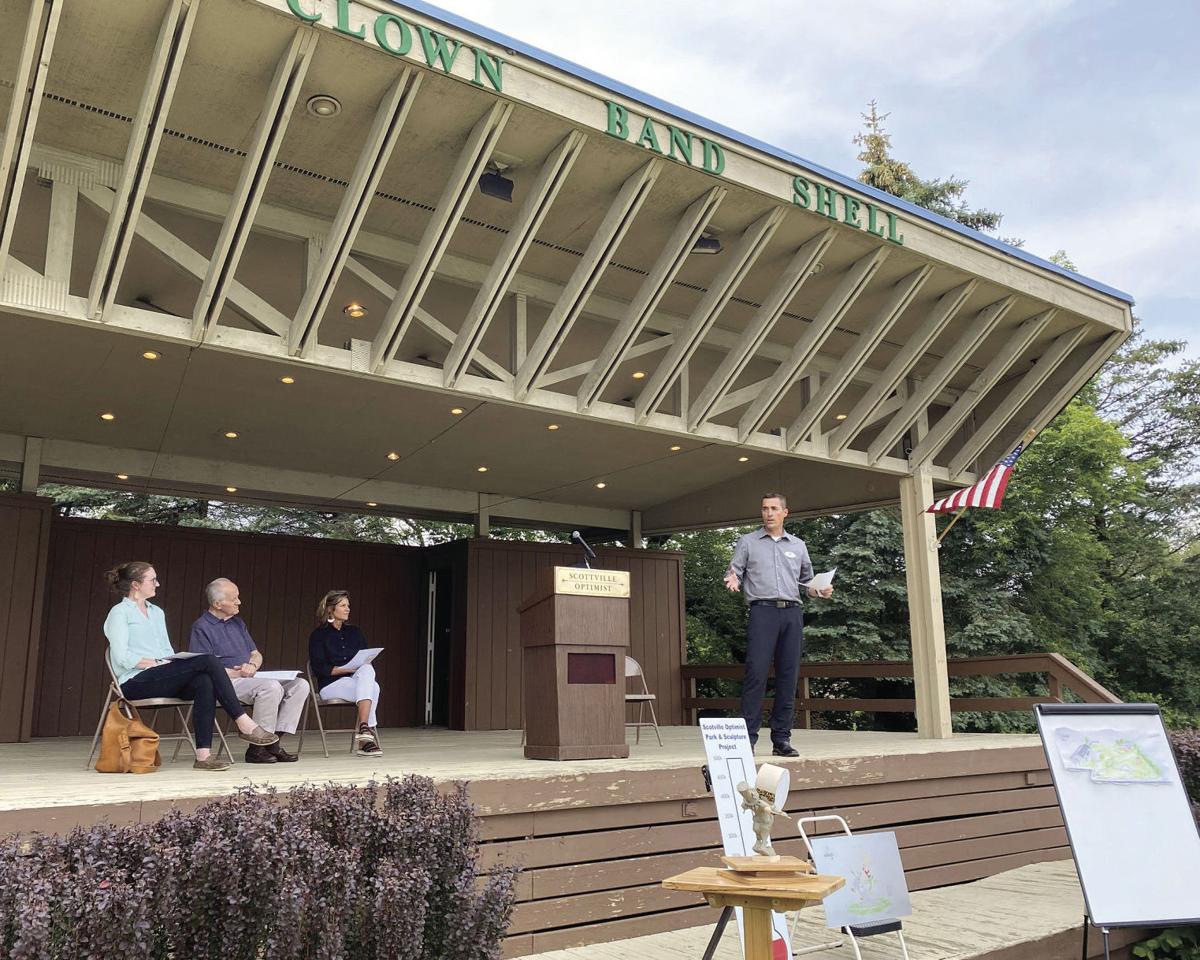 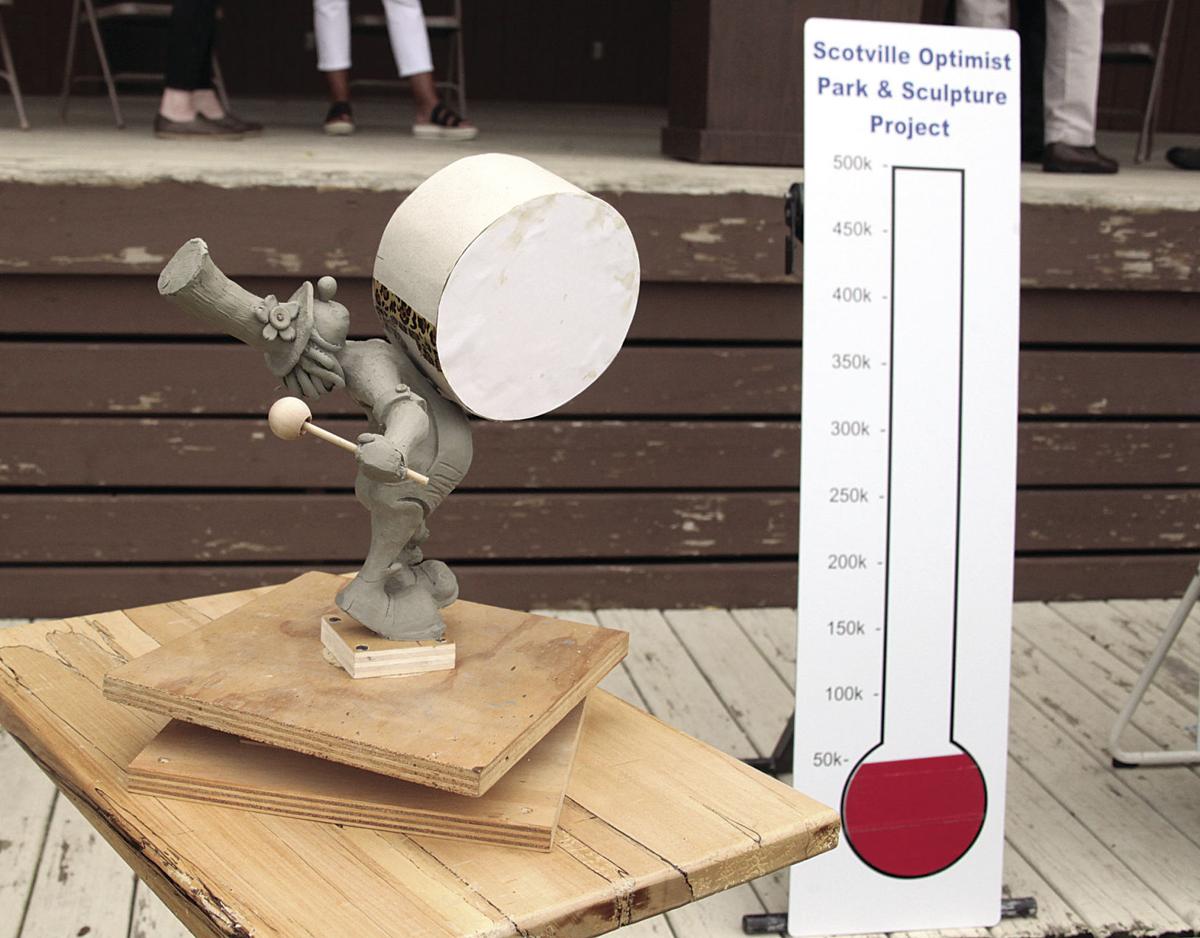 Progress is already being made toward reaching the $500,000 goal for the development of a community park and sculpture project in Scottville.

Progress is already being made toward reaching the $500,000 goal for the development of a community park and sculpture project in Scottville.

SCOTTVILLE — Fundraising for a planned community park and sculpture at the Optimist grounds in Scottville officially kicked off on Thursday with a joint announcement from the DDA and other partners and stakeholders at the Clown Band Shell.

The DDA, which now owns the property, was joined by representatives from the Clown Band, the Pennies from Heaven Foundation, the Community Foundation for Mason County and the City of Scottville in announcing a plan to raise $500,000 for the renovation of Optimist Hall; development of a community park on the grounds; construction of a Clown Band sculpture that would land the city on the Mason County Heritage Trails; and potentially, the refurbishment and relocation of the Band Shell to more stable ground.

The community is “ready to move forward” to bring the long-awaited project to fruition, according to Joe Knowles, Optimist president and DDA board member.

The vision is for the park to feature the sculpture, dubbed “Forward March,” designed by local filmmaker and sculptor Harold Cronk. Cronk would also design playground equipment, with an updated layout and improved green space.

Knowles said the goal amount of $500,000 “may sound like a big number,” but he believes it’s reachable. That was illustrated by several donations highlighted on Tuesday alone, which started off the fundraising in earnest.

In addition, Knowles noted that the Optimists themselves technically made the first donation when they sold the building and grounds to the DDA at a 50-percent discount. That resulted in $50,000 going toward the project back when the sale took place.

Knowles also announced that the Optimists would be pledging an additional $1,000 per-year over the next five years, bringing their total contribution to the project up to $55,000.

The Pennies From Heaven Foundation also made a contribution through a matching grant.

“I’m excited to announce, on behalf of the Pennies from Heaven Foundation, we’re offering a $50,000 match to the fundraising efforts, to help support and encourage this community, so that every dollar is doubled going to this great cause,” said Monica Schuyler, executive director for the Pennies From Haven Foundation. “We are truly excited to support this project.”

Knowles said he’s proud of the community’s collaborative attitude toward turning the project into a reality, and doing what it can to make sure that happens.

“This is going to be built by our community, for our community. Not just Scottville, but the entire community surrounding us in Mason County,” Knowles said. “This isn’t money that’s going to fall from the sky, or state dollars that are promised but never come.

“This is money that’s going to come from our own community to build a project that we all believe in, and have been a part of for so long in Scottville. And we’re excited about that.”

Since the idea of a sculpture was first brought up about five years ago, Knowles said he’s fielded several questions from the public as people wondered what was happening with the sculpture. Later, when the Optimist sold the grounds to the Scottville DDA, he fielded more questions about the community park project.

He said he wanted the public to know that work never stopped, it’s just that some of it was happening “behind the scenes,” and he wanted to share that with the community now.

“I know it’s been a long-time coming,” Knowles said, adding that he wanted to make sure the public knew about the planning and organization that was being done behind the scenes to meet fundraising goals. “This announcement is nothing more than the beginning. We couldn’t be more excited.”

A fund for the park and sculpture project has been set up with the Community Foundation for Mason County. Andrea Large, executive director of the foundation, told some members of the public who were on-hand at Tuesday’s announcement about how they could contribute.

Donations can be made by writing a check to the Community Foundation for Mason County and clearly marking it for the Scottville Optimist Park & Sculpture Fund, or by visiting www.mason-foundation.org and using the foundation’s online portal to make a contribution. Large said stocks and bonds are also good ways to donate, as are memorial contributions or pledges over three or five years.

For more information about the project or how to contribute, visit the Community Foundation for Mason County’s website or call Knowles at (231) 757-4743.