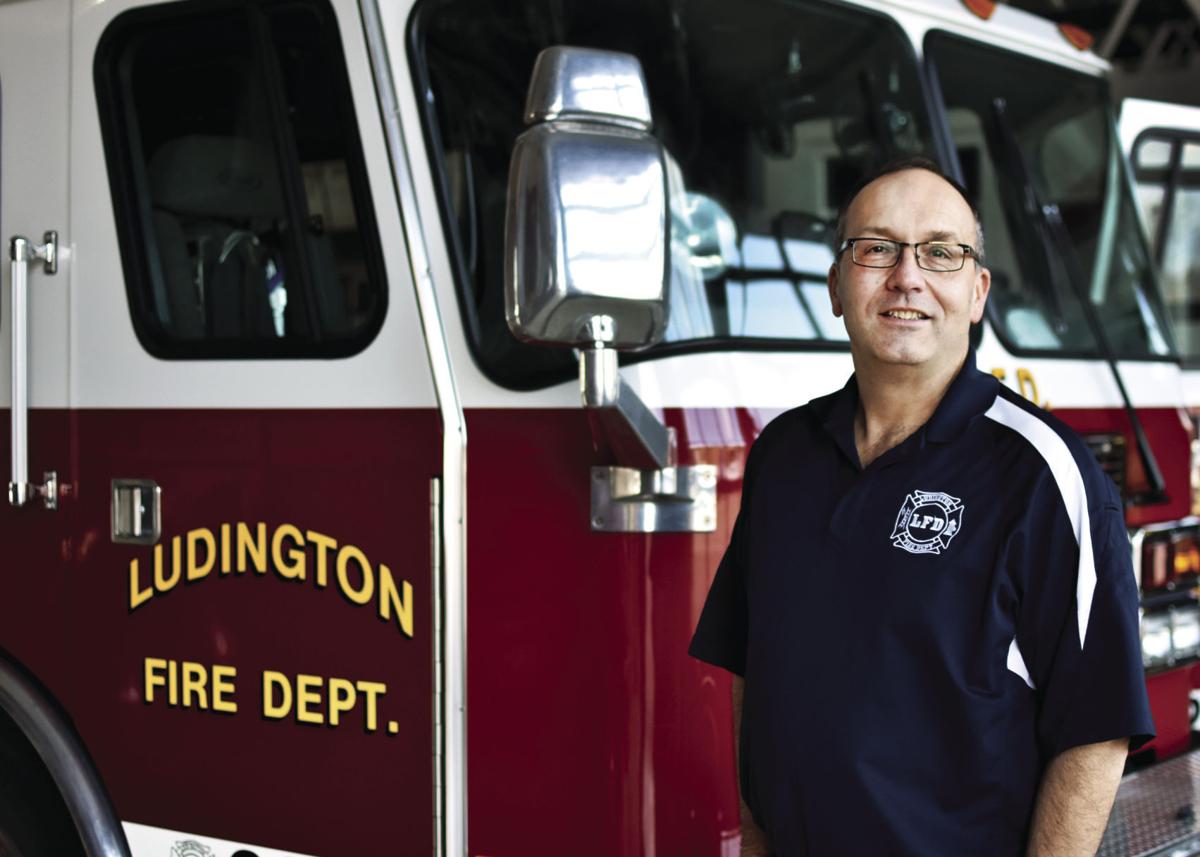 John Henderson was appointed as fire chief after former Chief Jerry Funk retired. Henderson has been on the fire department for 28 years. 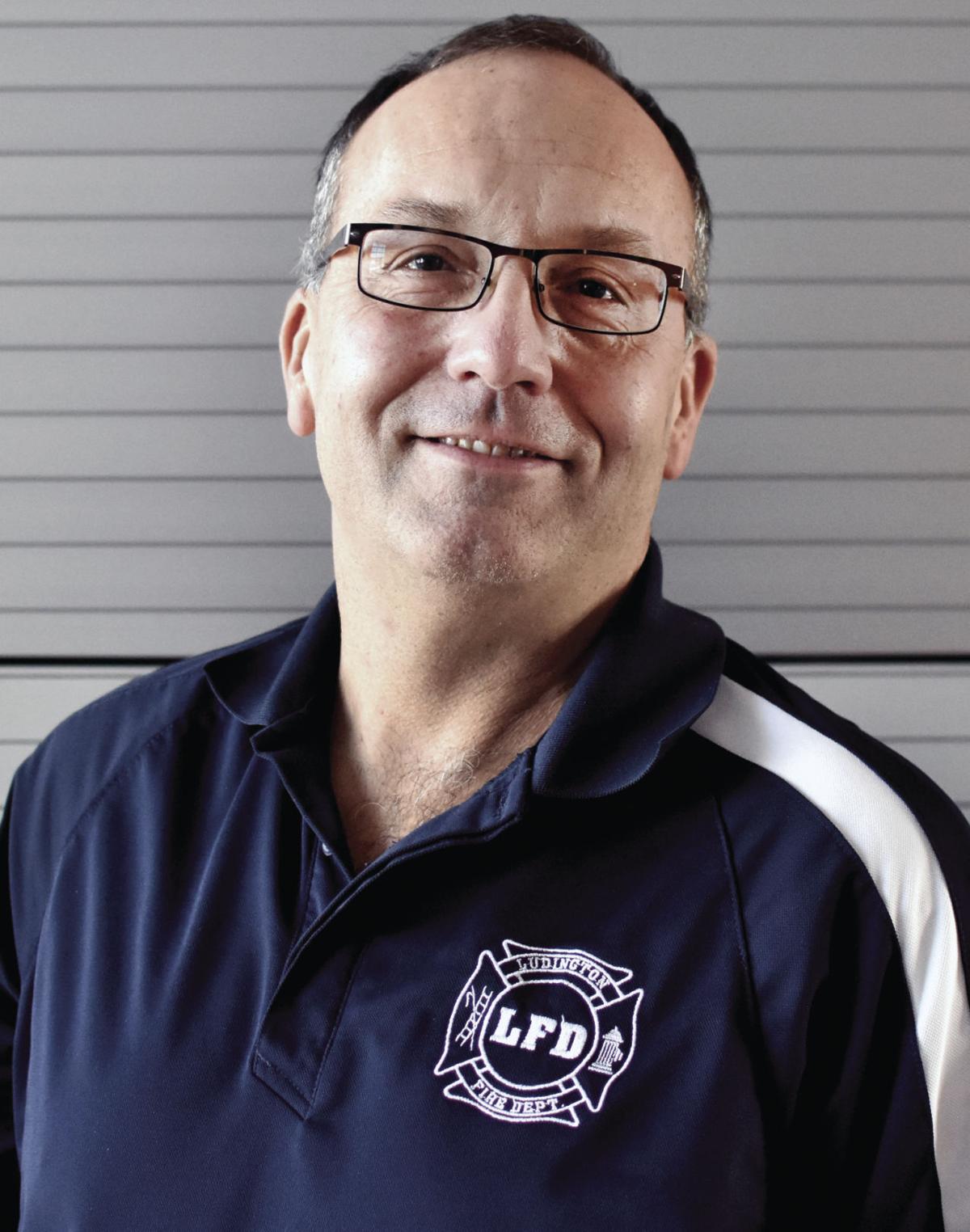 John Henderson started in his position as Ludington Fire Chief this week.

John Henderson was called “Fireman John” for years by the children he taught fire safety. These days he’ll be known as “Chief.”

Henderson had his official first day as fire chief of the Ludington Fire Department on Wednesday.

Henderson said he is excited about the opportunity. He’s wanted to be fire chief for quite some time and was grateful for all of Funk’s mentoring leading up to that day.

That’s what he is looking forward to most in this new position — the chance to mentor the officers and firemen in his department.

Henderson works as the human resources manager at Occidental Chemical Company, which he plans to continue doing. Fire chief is a volunteer role, just like all the positions at the station.

Including his 28 years on the fire department, he has a long record of public service.

He was mayor of Ludington for 12 years and on the Mason County Board of Commissioners for five years. He’s also sat on multiple boards in the community including the Downtown District Authority and the planning commission.

“For me, it’s always been being able to help my neighbor,” he said. “I’ve been fortunate that my work and my life allows me to do that.”

Henderson joined the fire department in December 1992. He said he’s held a number of roles during those years.

“I was a lieutenant for a year and a captain for about two years,” he said. “I was the secretary for multiple years. I’m a fire instructor. I’ve taught for 20 years.”

Henderson was selected to be the chief by the mayor and affirmed by the city council. He credits his years of service and the recommendations by his predecessor and fellow firemen.

“They knew my interest and what I’ve done. Jerry’s been mentoring me to take the spot,” he said. “I was fortunate, based on the recommendations from the mayor, Jerry and the guys, to be selected as the chief.”

He said he was ecstatic when he found out.

“I’ve aspired to be fire chief for a long time. It’s a great honor,” Henderson said. “I have big shoes to fill. Jerry’s been in this department for 50-plus years and half of those as chief. He has quite a legacy, and I’ve got a lot of work to do to meet that legacy.”

As chief, he will oversee the budget and operations of the station to meet the state regulations and fulfill the department’s charter.

He said it’s more than seeing that fire calls are answered, but making sure the entire department is prepared for whatever they might have to face.

“It’s the recruiting, administration and also being the chief administer of the fire code for the City of Ludington. I’ll also work with the other agencies as needed, such as the fire marshal for an investigation,” he said.

One of his passions is teaching the various training seminars for fire and rescue certifications.

“What I want to do is teach people what I’ve learned, as it was taught to me — to teach downward,” he said. “And that’s what I expect of my officers, to teach the new recruits... so not only will they be as good as we are, but they’ll be better.”

A goal he has for his entire time as chief, not just in the upcoming year, is to ensure the training fits the circumstances that firefighters encounter. He wants them to be prepared for any scenario.

He knows first-hand what firefighters might encounter on the job and wants his fellow firemen to be prepared.

Early in his fire career, he was called to Franklin Elementary when a kindergartener stuck his head into a box.

“It was a homemade carpeted wooden box and he got stuck. This little kid had tears running down his face and couldn’t get out,” he said. “Who did they call? They called the fire department. It’s those calls that I find rewarding.”

Something he would like the community to understand is that the fire department is about more than putting out structure fires. They get called “whenever some is having a bad day,” he said.

He said one time an Ultralight aircraft got stuck in a tree and the fire department got it down. Another time he had to rescue a crocodile from a house filled with smoke.

“It’s all those types of things. When people have problems, that’s what we do, we solve them,” he said. “This job is always changing. There are state training requirements we have to meet... and we also have to look around at the possible hazards. Hazards change from year to year.”

For example, he said they’ll be looking at how to better respond for ice rescues.

“We have a brand-new station and great equipment, now it’s asking ‘what’s the strategy to keep that up,’” he said.

Another goal he has is to be more proactive in the community. The department has several outreach programs, with the local schools and senior residencies, but he wants to do more.

The fire department gives out fire detectors, but he wants the department to also offer installation.

“I’d like to enhance the program we already have. The idea is, you don’t need to wait until you have a problem to call us. You could make arrangements to have us come do the evaluation,” he said. “It’s just enhancing the fire prevention efforts that we already do.”

And it’s not always the small things. He clearly remembers the nine fatalities from a Ludington fire in 1993. It was only his third month as a firefighter.

“The first big fire we have, I run down, get dressed, and we do what we need to do. I get the hose, go to put this fire out, and after I get my air pack on, while I’m moving to the door, here come two young moms screaming, ‘My kids, my kids,” Henderson said. “It went from ‘we’re going to put this fire out’ to ‘this impacting people and it’s extremely real.’”

He said he’s lucky that he had people to advise him and he wants to do the same for those he oversees. In his role, he ensures that his crew is debriefed after calls.

“I’ve been fortunate enough to have a lot of great people who’ve helped me become who I am and give me the skills I have,” he said.

It’s also events like that one that drive him to educate people, especially children, in the community about fire prevention.

“I was Fireman John for... years early on. I taught tons of fire prevention safety to kids,” he said. “Unfortunately in my career, a number of people have perished in fires for whatever reason. But it’s motivation to teach others and teach fire prevention. That’s the biggest thing — if we can prevent fires and teach people how to respond if they do have a fire, we can save people and properties. Because that’s the goal.”

An immediate challenge he’s tackling is recruitment. The fire station can have 20 volunteers and they are currently staffed at 15.

“Last year we had a record number of calls, 802. Of those, 500 were medical calls. Seven volunteers are trained as medical first responders,” he said.

He is interested in creating a unit that will respond to specific calls. The unit would share the trucks and assets, but only run the medical calls — when people need quick medical intervention.

“They won’t be firefighters. They’ll be members of the department, but ultimately they’ll be medical first responders to help fill that gap so we can keep effectively responding to medical calls,” he said. “We get called when people are having a bad day. They expect us to come, expect us to provide services and that’s my goal.”

Henderson said he wouldn’t ask any of his crew to do something he isn’t willing to do himself. He wants to lead by example. It’s part of his trust-based approach to leading.

“In any fire service, you have to have a command control with a chief, someone in charge. But my management style is very team-oriented,” he said. “We’re going to spend a bunch of time together, coming to an agreement of what we need to do and work... to get the hearts and minds of folks to support the efforts we’re trying to make.

“But there are times you need to lead. My expectation to the officers is that we will be leading our squads. So, if we’re sweeping floors, I’m sweeping floors.”

What he wants to communicate with the public the most is that the fire department exists to solve problems. He said listening to people is an important part of that.

“The fire department is here to do community service proactively, not just reactively, when it comes to fire prevention,” he said.