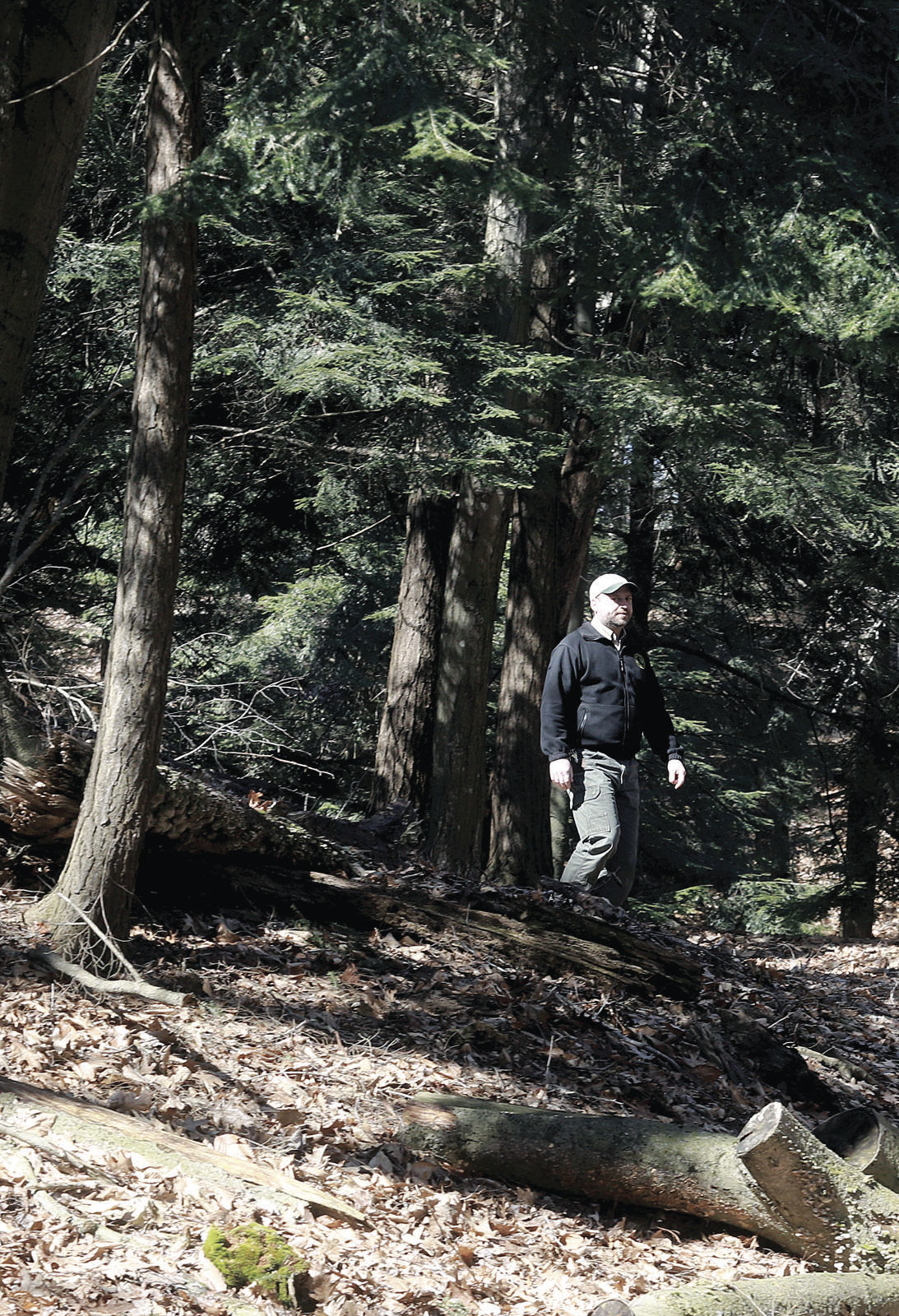 Ludington State Park Supervisor Dan Adams checks a trail for debris in the park on Tuesday. 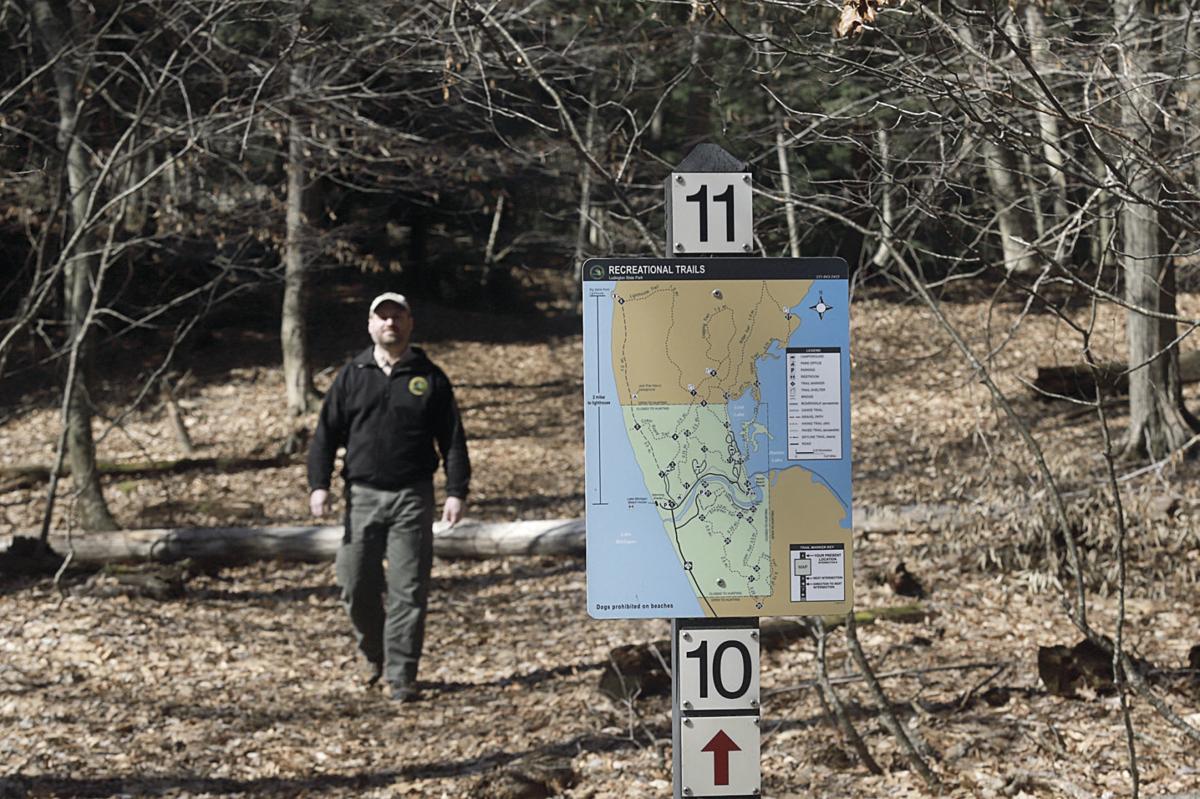 Dan Adams, Ludington State Park Supervisor, walks off a trail head at the park on Tuesday. Park staff has noticed an increase in the number of people out using the park system this past week.

Ludington State Park Supervisor Dan Adams checks a trail for debris in the park on Tuesday.

Dan Adams, Ludington State Park Supervisor, walks off a trail head at the park on Tuesday. Park staff has noticed an increase in the number of people out using the park system this past week.

Ludington State Park remains open and people have been taking advantage of the park’s 5,300 acres and variety of ecosystems.

Dan Adams, park supervisor, has noticed an uptick in the number of people in the park, especially the children. Tuesday was the second day of Gov. Gretchen Whitmer closure of K-12 school districts through April 5.

Since the closure of K-12 schools, the governor has had to make many more difficult decisions to slow the potential spread of coronavirus (COVID-19).

Those decisions have had an impact on what and where individual or families can go and spend time together away from the place they call home.

Enter the Ludington State Park, which offers roughly 23 miles of hiking trails — if you include the south trails — to meander along the Sable River, Lake Michigan and several other bodies of water throughout the park.

The trails run through the woods, cut across sand dunes and take you high above the forest floor.

“There are varying levels of difficulty,” Adams said. “There is something for everyone.”

Adams said maps, which are located throughout the park, have the mileages on them so visitors can plan their hike.

The easiest trails in the park, according to Adams, are the paved trails that run along the Sable River and campgrounds.

“The Sable River path is relatively flat but it is still scenic,” he said. “It takes you along the river, and you get to see a variety of things.”

Adams referred to the popular paved trail within the park near the Cedar campgrounds as the loop.

“From Cedar Campground you can go around and cross the Hamlin Dam and back,” Adams said. “The path is paved the entire way allowing someone with a mobility issue the opportunity to still take that loop.”

In anticipation of more people taking advantage of the park, Adams said the crew has been out clearing the path of debris, like leaves and fallen tree limbs.

“We have already noticed more people using the park,” he said. “There’s kids in the park that normally shouldn’t be here this time of year. This past weekend was really busy. There were a lot of people here already.”

Adams said the park is planning for the numbers to continue as people are looking for ways to get out of the house, but still staying away from others.

“This is definitely a good way to do it,” he said.

The trail to the Big Sable Point Light is also a popular hike for people, according to Adams.

The hike is relatively flat, and because of the time of year, it would be a comfortable walk.

Adams said in the summer it tends to get a little hot on that trail.

He also recommends packing water for the trail and dressing in layers.

“There are a few trails in the park that you are going to get wet on this year because of the level of Lake Michigan,” Adams said. “The actual Light House Trail is underwater and well as the Coast Guard Trail as you get close to the road.”

The trails are relatively dry as you get back into the park, the Ridge Trail, Logging Trail and the Island Trail are dry because each is on higher ground.

Adams said to check ticks because they have been found on hikers.

He also mentioned that there is still wildlife to see this time of year, and the migratory birds have started to come back.

Adams said we wants people to enjoy the park and entrance fees can be paid at the office during office hours, or a park pass can be purchased at the Secretary of State office, but if there is not an option that day, try to get one as soon as possible.

“We would encourage people to come back when we are manning the booth and get there sticker at some point,” Adams said.

Adams did say you can bring you dog to the park, but the dog needs to be on a leash at all times and remember to clean up after your pet.