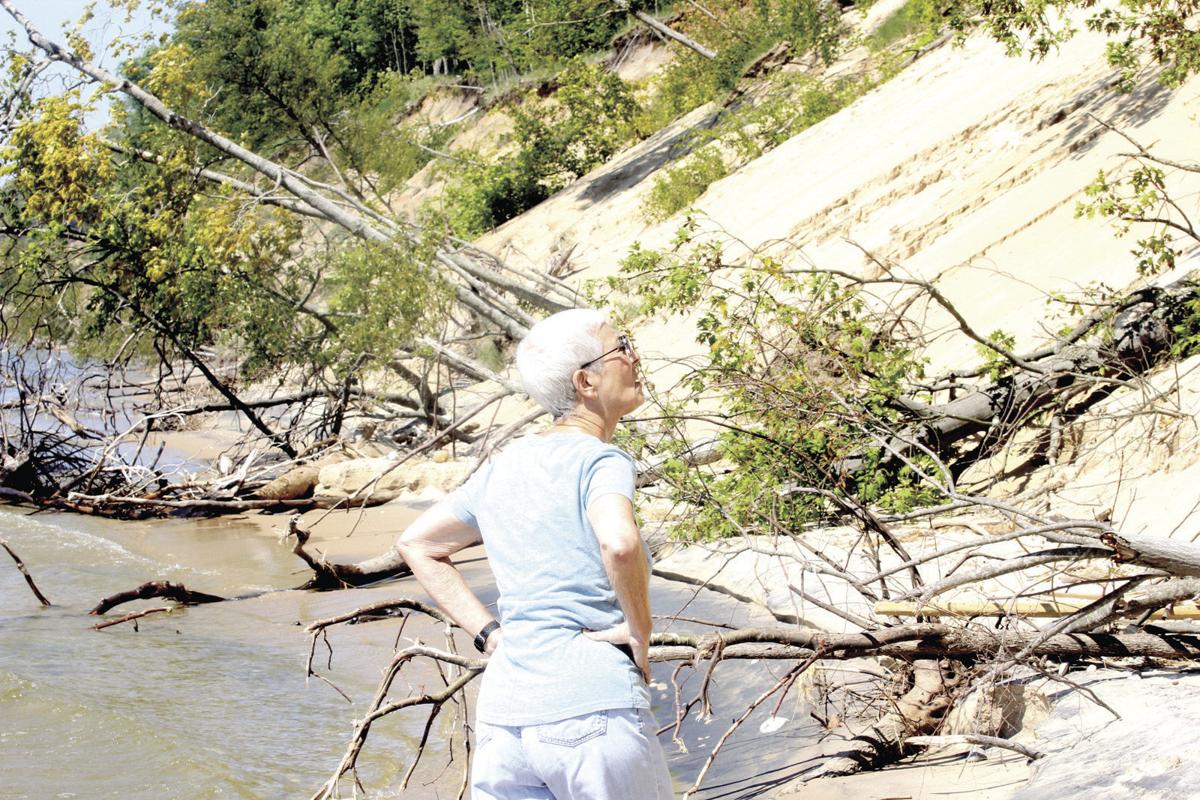 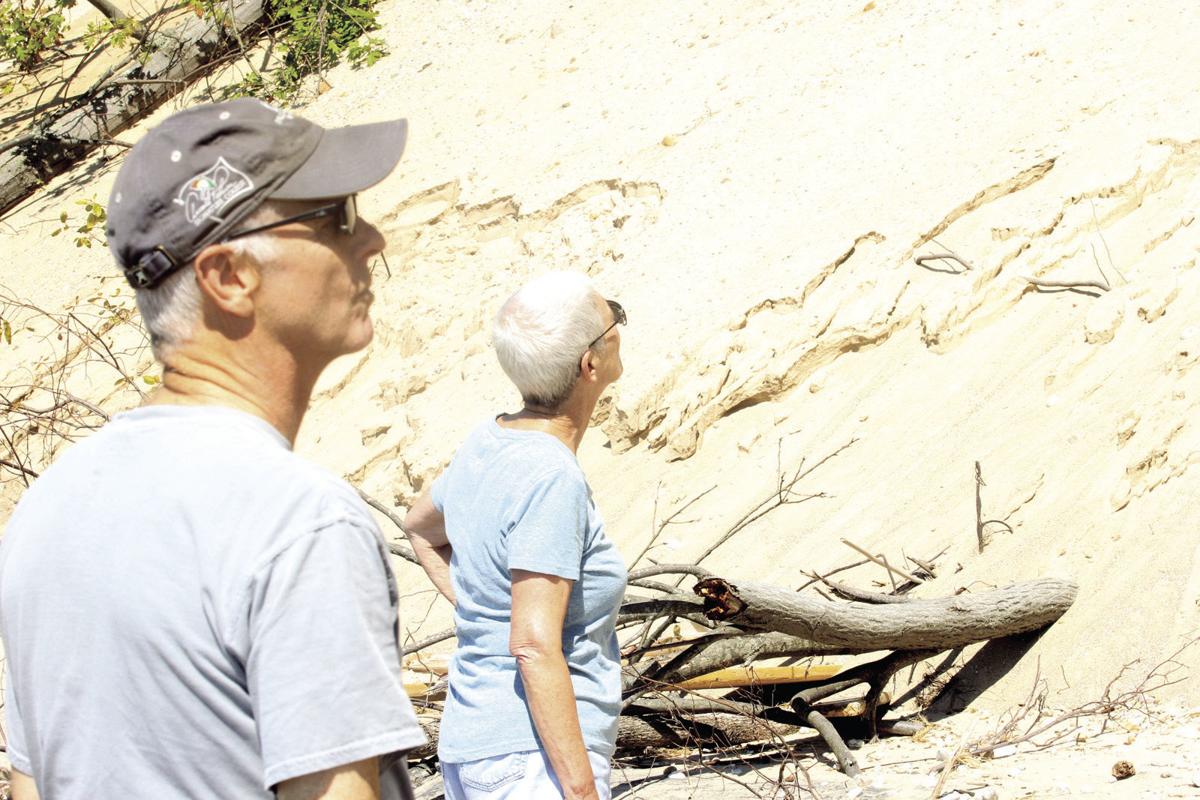 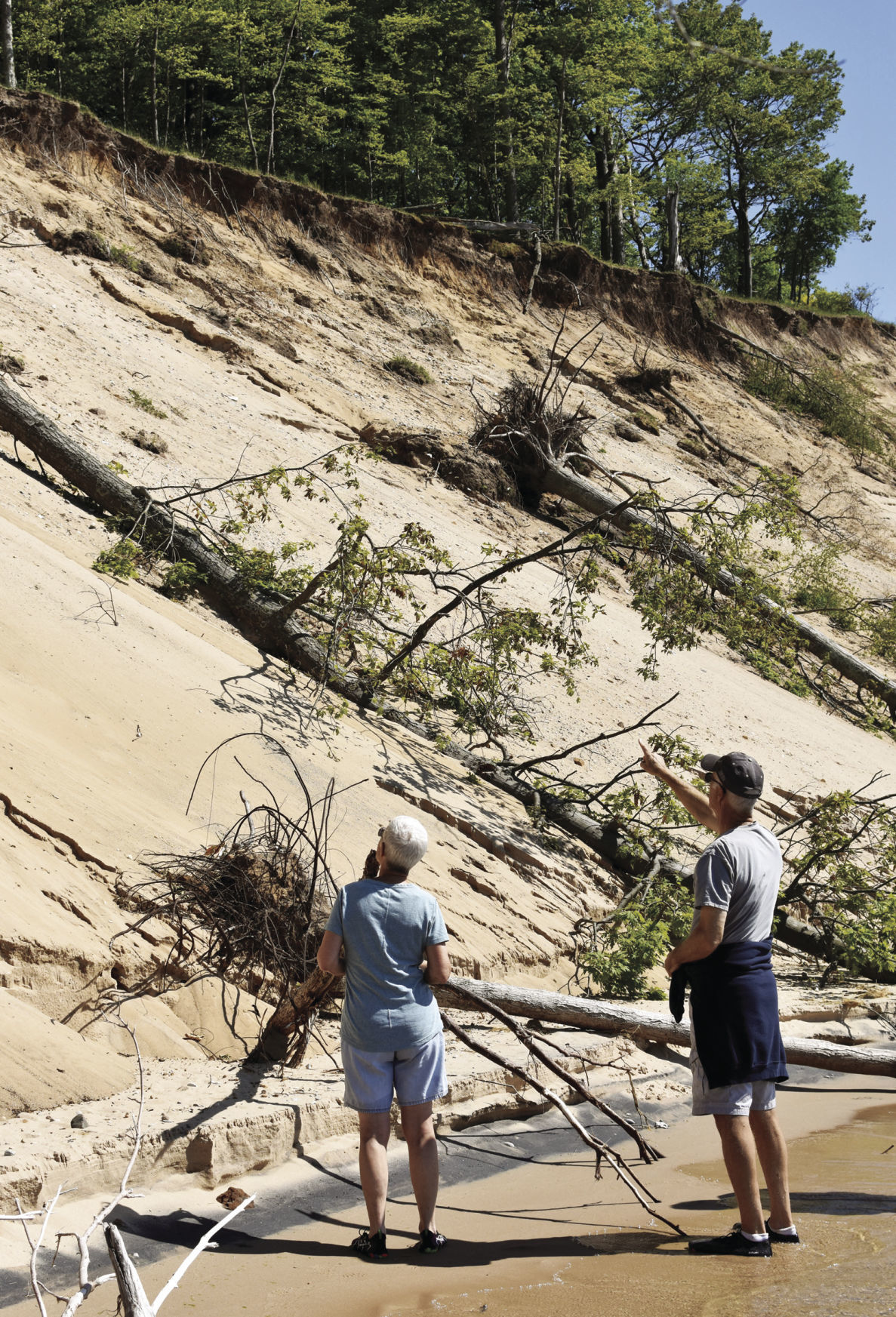 Nora Pasman-Green and Jeff Green recall walking onto the scene. The bones were in piles between two fallen trees about 50 yards above the shoreline on Tuesday, June 2. 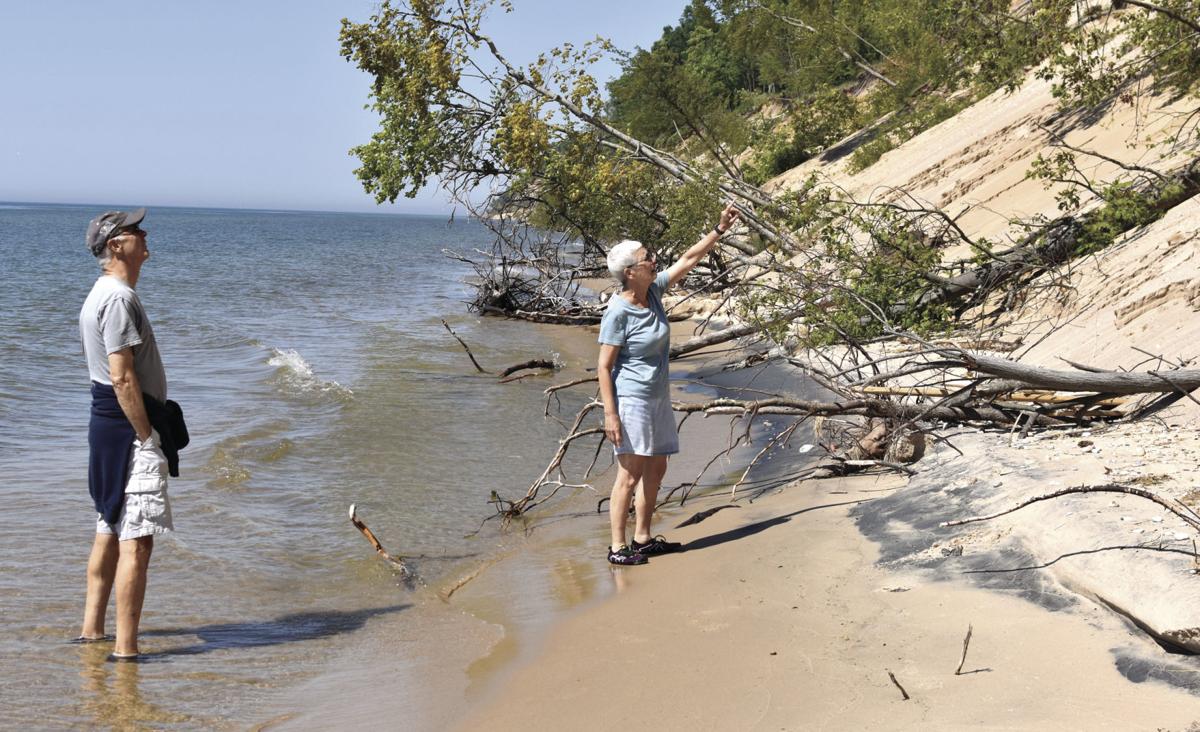 Jeff Green and Nora Pasman-Green point to where they first spied the bones lying on the sandy hillside. The Michigan State Police confirmed the bones are human and likely from an old burial site. 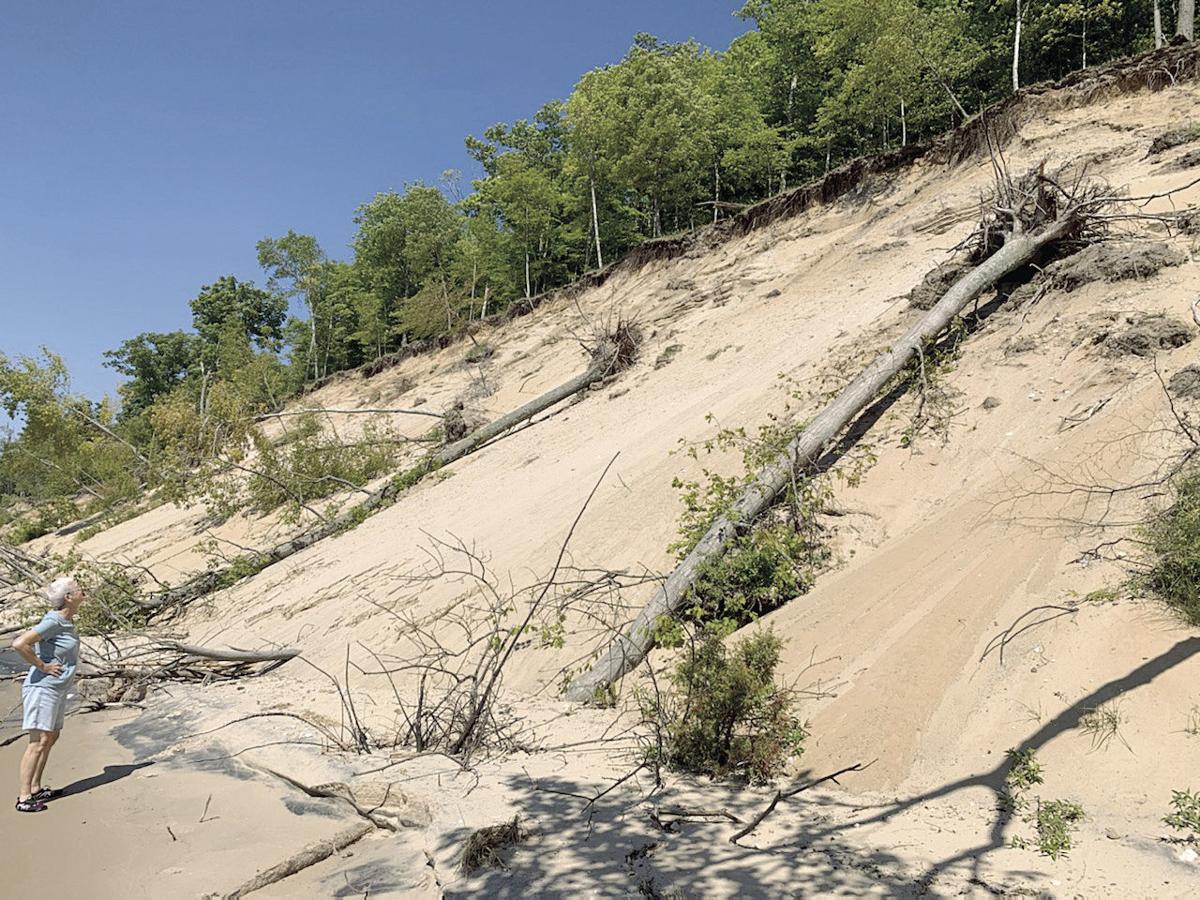 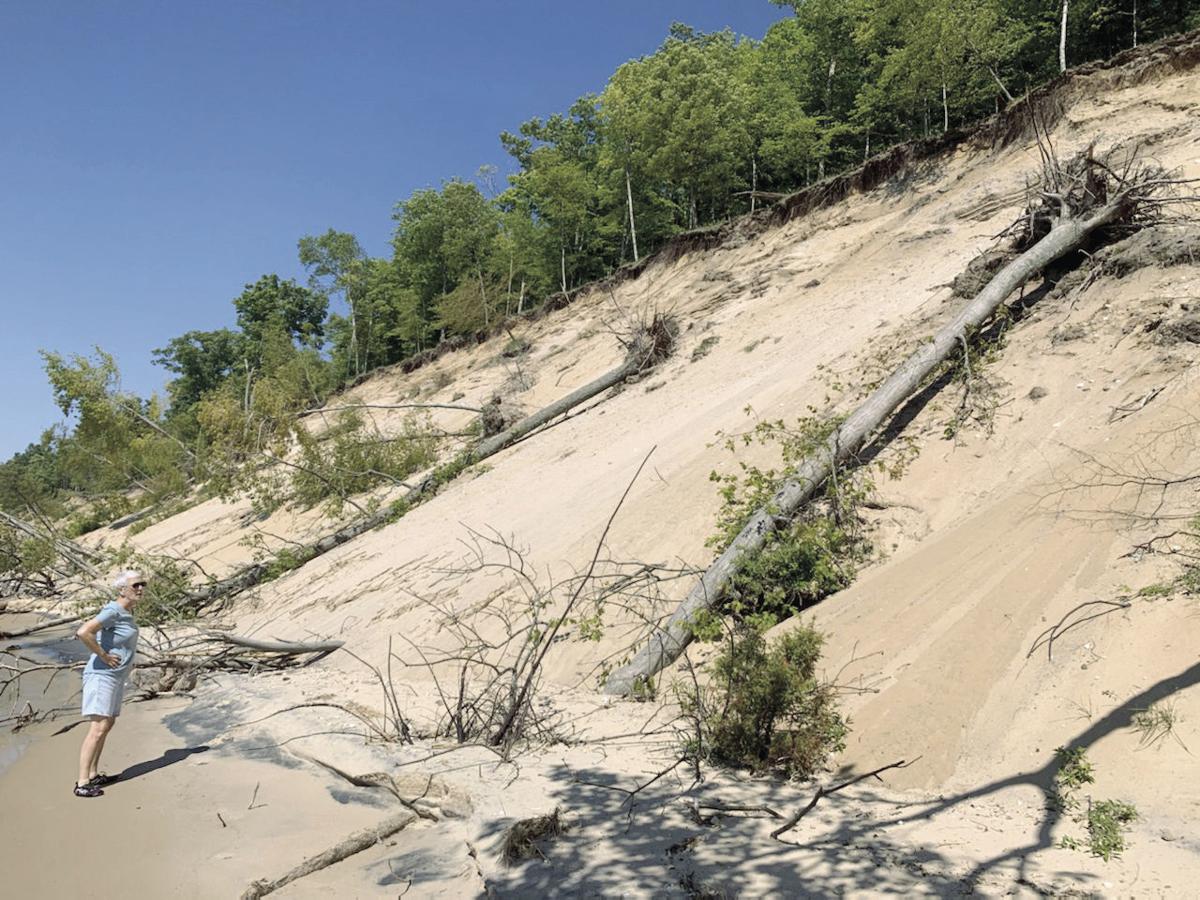 Nora Pasman-Green and Jeff Green recall walking onto the scene. The bones were in piles between two fallen trees about 50 yards above the shoreline on Tuesday, June 2.

Jeff Green and Nora Pasman-Green point to where they first spied the bones lying on the sandy hillside. The Michigan State Police confirmed the bones are human and likely from an old burial site.

The couple lives in a log house seven miles south of Manistee and was on one of their daily walks to check the erosion damaging the dunes and threatening houses nearby.

They were about a mile from their home when they spotted people standing with a Michigan State Trooper near the mouth of Gurney Creek.

On Tuesday, June 2, the Michigan State Police received a call that bones were discovered on one of the bluffs, according to Spl. Lt. David Cope, state police public information officer.

Nora said when they arrived that day, the man who made the call was there with a woman and children watching the troopers investigate what they found.

"The man, who had his kids on the bluff, called MSP and realized they should get off," she said.

Fifty yards up — between two trees fallen parallel down the hillside — lay the bones.

The bleached-white bones were in three piles about five yards apart, Jeff said.

“They were white and loose and looked like femurs,” Nora said.

A few were scattered and sticking out of the sand.

"There are believed to be six to seven individuals at the site," Cope wrote in an email.

An avid mystery reader, Nora was intrigued by the sight but she and her husband stayed at a distance to let the troopers work.

The first trooper stayed with the observers while the second trooper scaled the hill.

“The (state trooper) was talking to her partner who was up on top,” Jeff said.

Nora suggested the trees, which likely fell due to erosion, revealed the bones.

The record high water level has chipped away at the shoreline since 2019.

“Those two trees just came down, so they had to pull a lot of land with them. Those are big-root systems,” Nora said.

The Greens waited in suspense.

Rumors floated around that it was near the location of the old Free Soil village, part of a logger camp or even a Native American burial ground. Some  suggested a connection to Al Capone, rumored to own a hotel in the area for his own personal use, Nora said.

"Beyond the remains, there were coffin wood and nails recovered, leading to the belief it was an old cemetery. There was also a shoe recovered. The shoe and some of the bones are being tested to narrow down a time range for when the remains were buried," Cope said.

The next day, the Greens spotted vehicles on the road near where the bones were found.

“There were six state police cars, several private cars, then several trailing the forensic anthropology unit,” Nora said. “There had to be at least 10 cars.”

The state police called in a forensic anthropologist team from West Michigan University Homer Stryker M.D. School of Medicine. The office of the medical examiner’s forensic anthropology team is handling the assessment of the remains, according to Cope.

Nora and Jeff said they can't wait to find out more about what could be a local historic landmark.