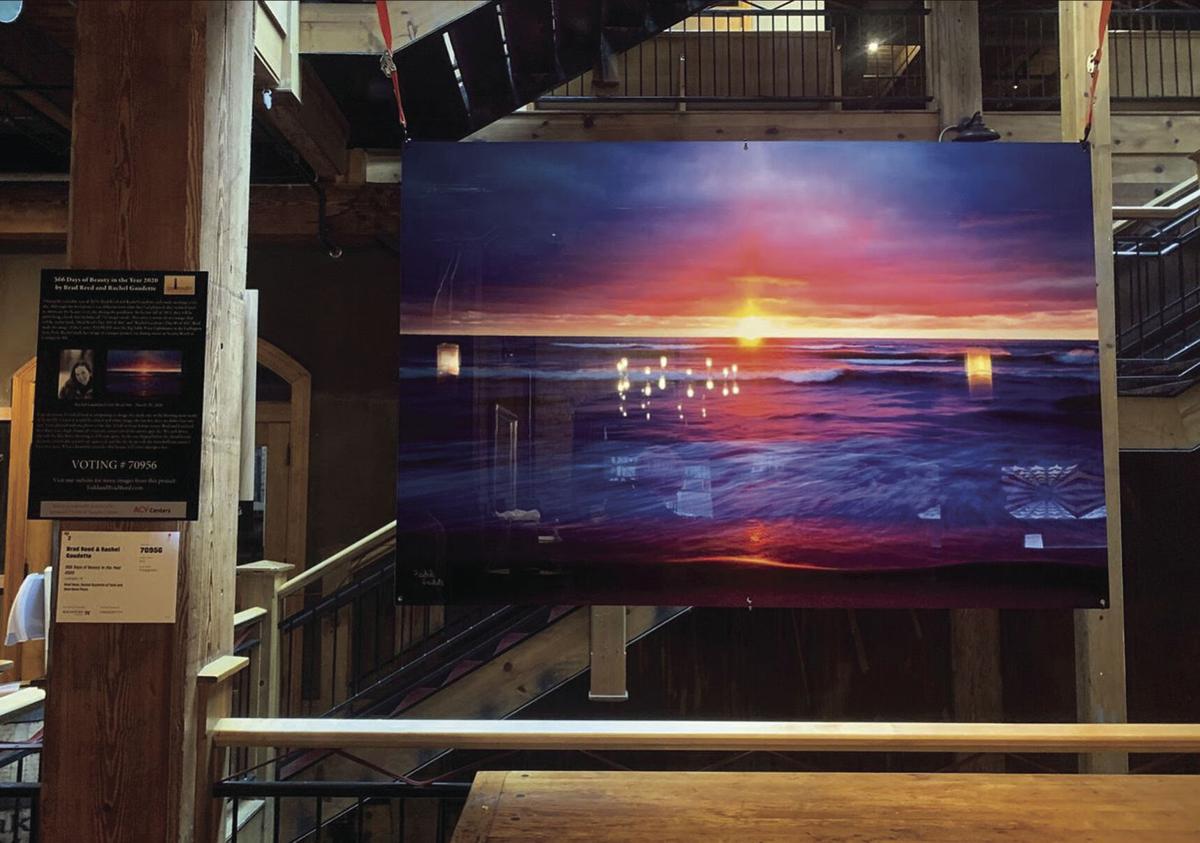 “Rachel Gaudette’s Day 80 of 366,” Gaudette’s half of her ArtPrize entry with Brad Reed, is on display at the BOB in Grand Rapids. 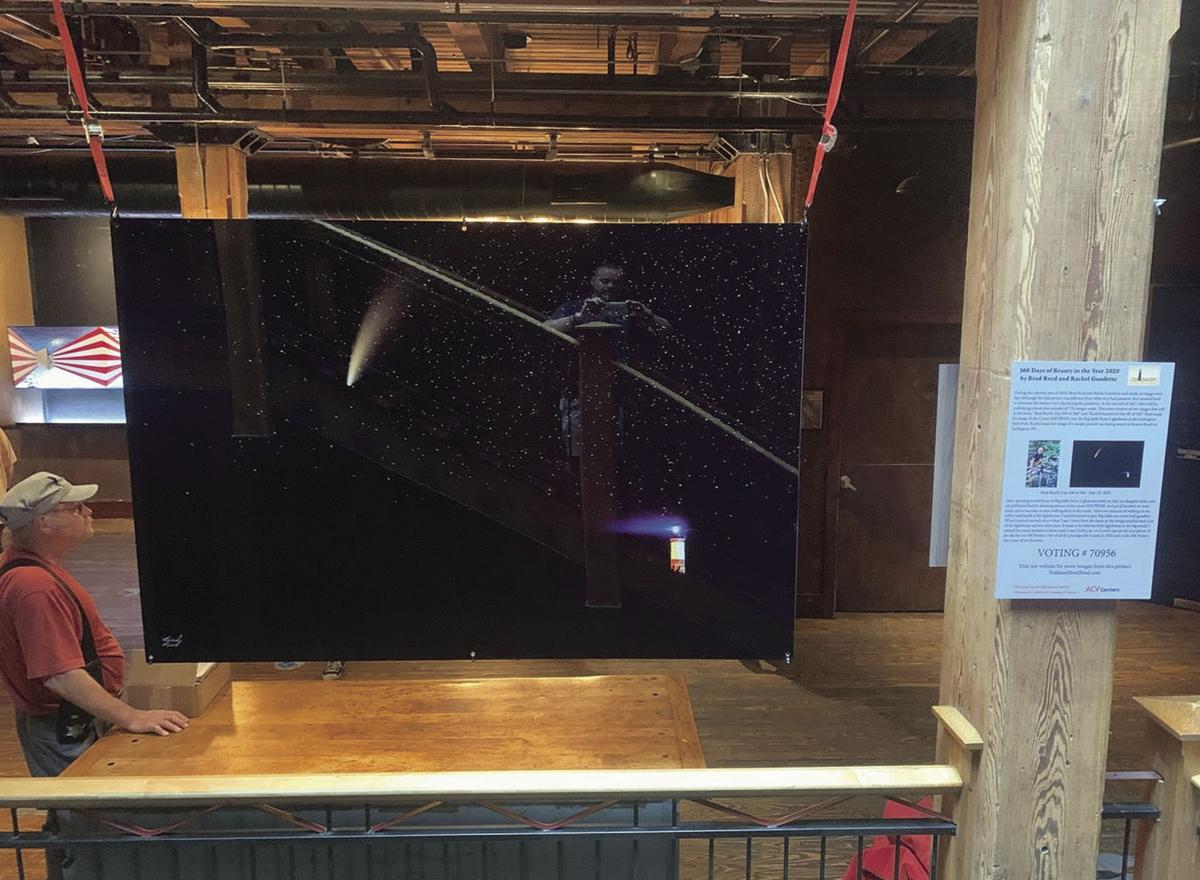 Brad Reed's image for ArtPrize, titled “Brad Reed’s Day 200 of 366,” is on display at the BOB in Grand Rapids. It's been placed back-to-back with an image by collaborator Rachel Gaudette. 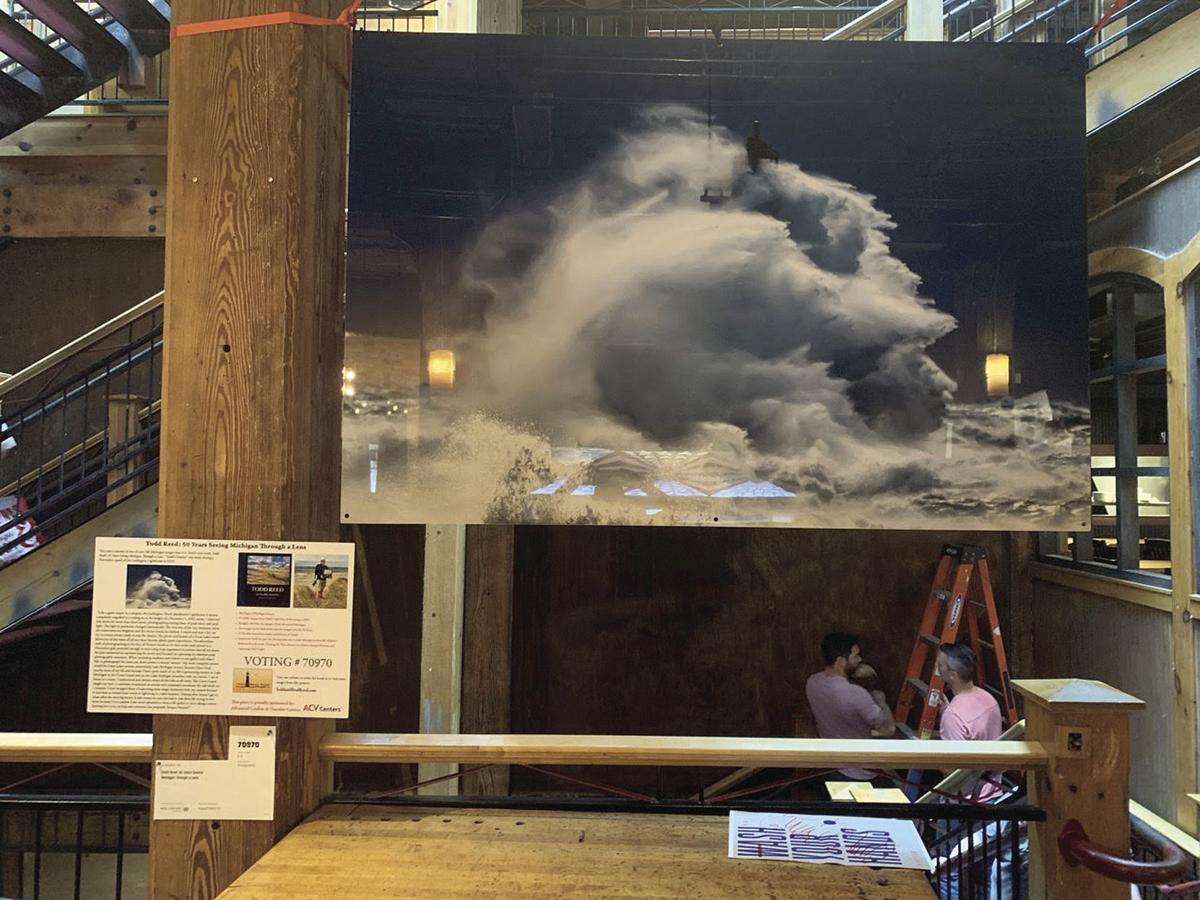 Todd Reed’s “Todd’s Destiny,” an image from his book, “50 Years of Seeing Michigan Through a Lens,” is mounted at the BOB in Grand Rapids for ArtPrize. 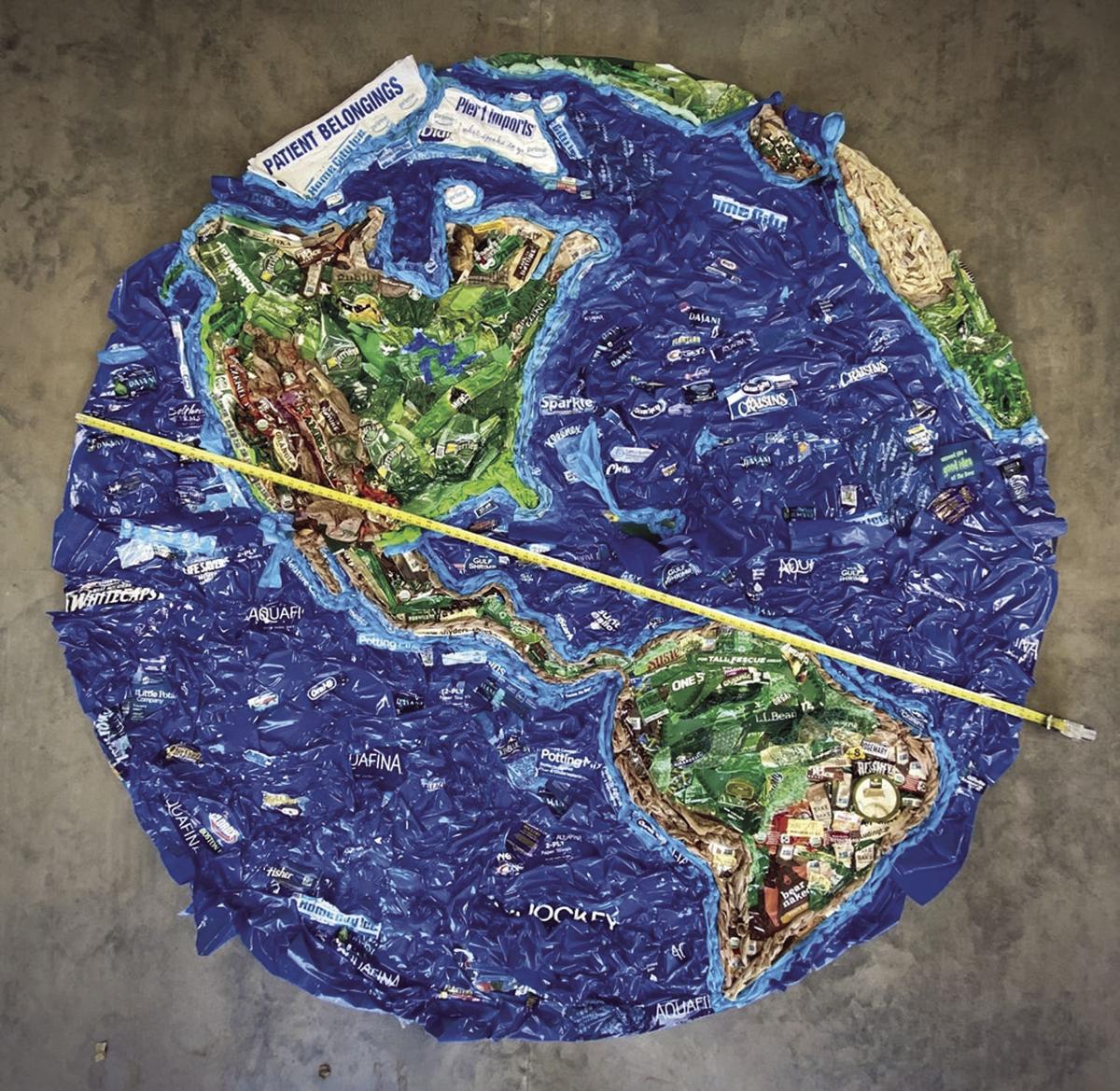 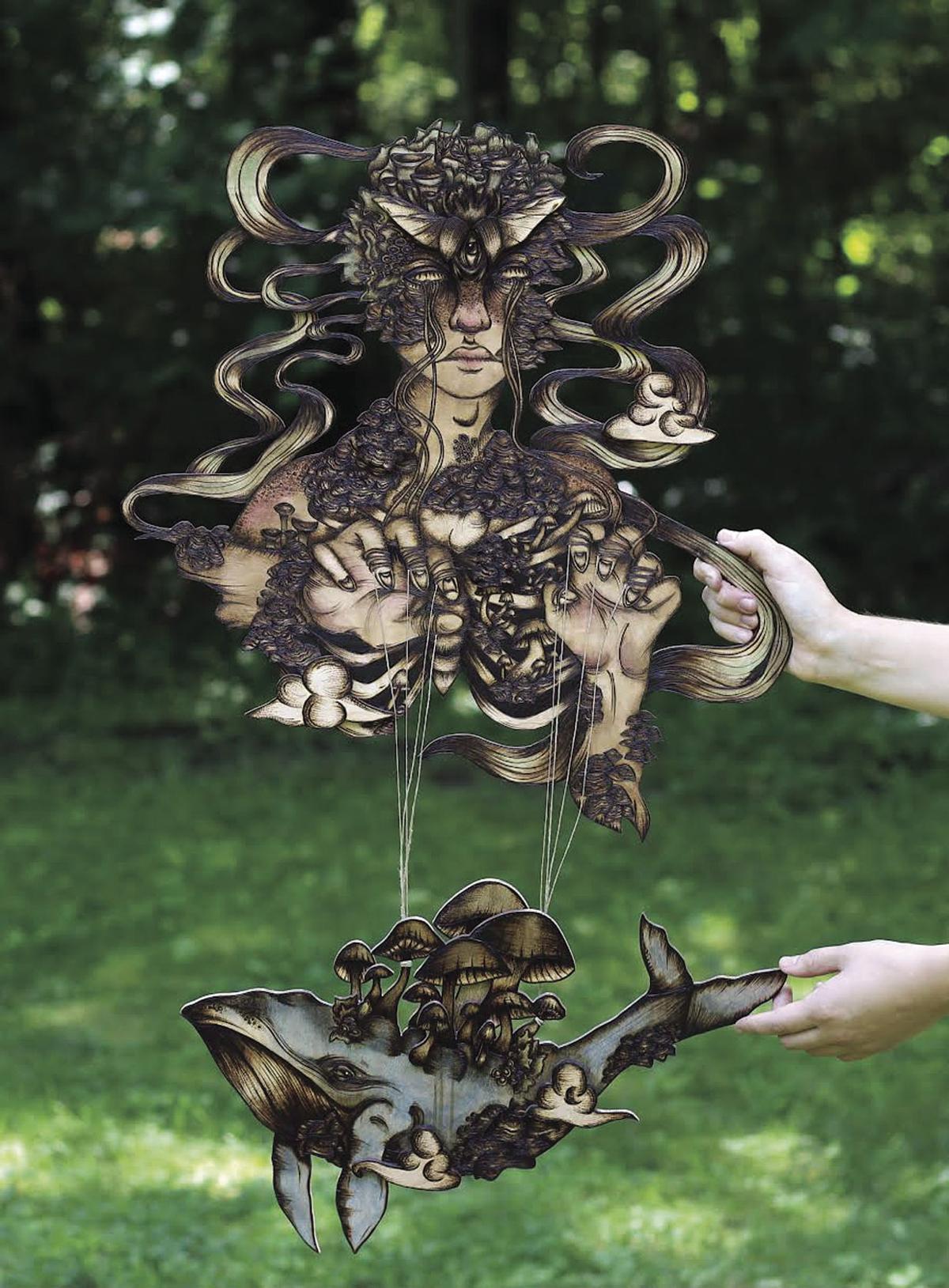 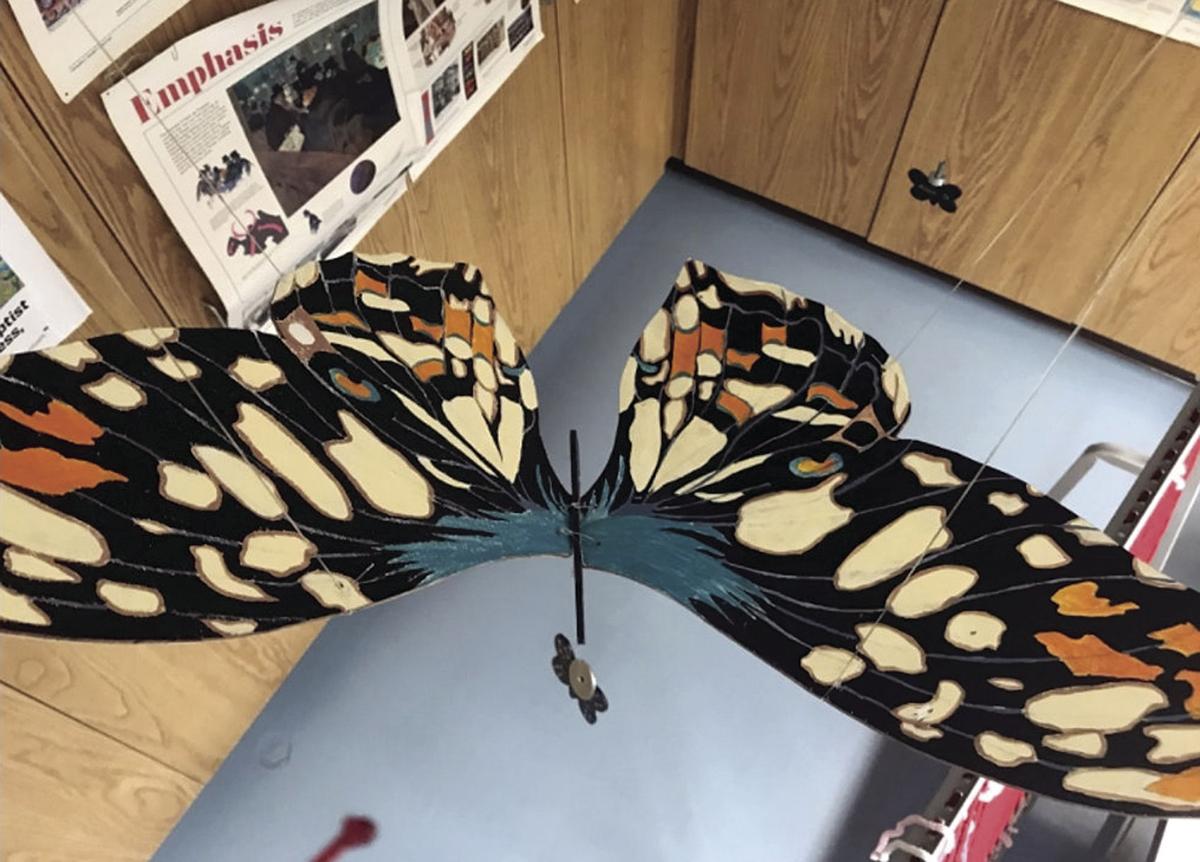 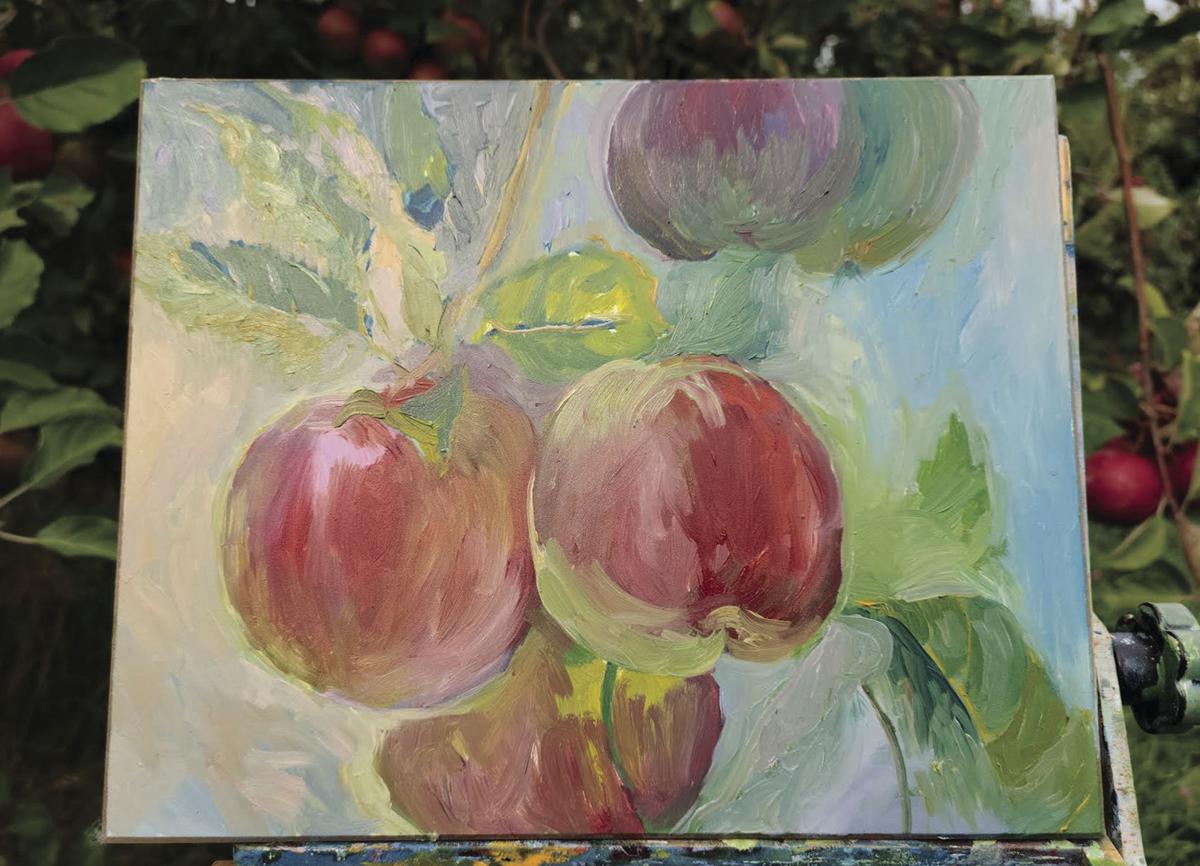 Laurel Prafke’s painting for ArtPrize, “An Apple a Day,” is at Bagel Beanery, 455 Michigan St. in Grand Rapids. 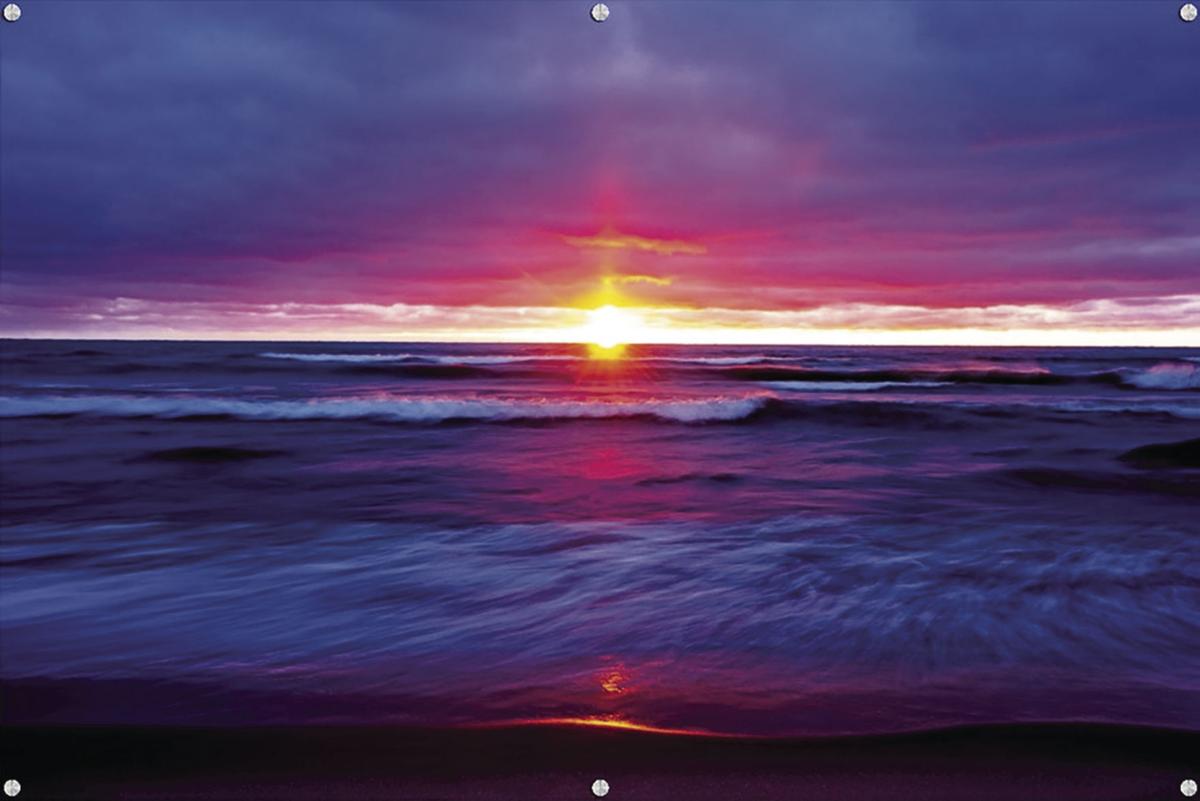 Rachel Gaudette’s image from her ArtPrize entry with Brad Reed.

“Rachel Gaudette’s Day 80 of 366,” Gaudette’s half of her ArtPrize entry with Brad Reed, is on display at the BOB in Grand Rapids.

Brad Reed's image for ArtPrize, titled “Brad Reed’s Day 200 of 366,” is on display at the BOB in Grand Rapids. It's been placed back-to-back with an image by collaborator Rachel Gaudette.

Todd Reed’s “Todd’s Destiny,” an image from his book, “50 Years of Seeing Michigan Through a Lens,” is mounted at the BOB in Grand Rapids for ArtPrize.

Laurel Prafke’s painting for ArtPrize, “An Apple a Day,” is at Bagel Beanery, 455 Michigan St. in Grand Rapids.

Rachel Gaudette’s image from her ArtPrize entry with Brad Reed.

Several local artists will represent Ludington and the surrounding communities during ArtPrize, and they range from first-timers to veterans of the public art showcase and competition.

ArtPrize starts Thursday in Grand Rapids, returning after a two-year absence. In 2018, the event changed from an annual to a bi-annual schedule. It was set to return in 2020, but the COVID-19 pandemic put it off for another year.

The artists’ entries span various mediums, from photography and painting to woodworking and mixed-media installations.

Father-and-son photography team Todd and Brad Reed, of Todd & Brad Reed Photography, have participated in ArtPrize every year since its inception, often working on projects together. This year, Todd had an entry of his own, so Brad entered with collaborator and fellow photographer Rachel Gaudette.

According to Brad, their entry, “366 Days of Beauty in the Year 2020,” was inspired by a project he made with his father in 2010, when the Reeds each made an image a day for the entire calendar year. 2020 marked the 10-year anniversary of that project, and Brad wanted to do something similar. It was also a leap year — hence the 366 days in the title.

It was also the peak of the pandemic. Brad said COVID had an impact on the project, leading to it being more “local” and “home-based” than originally planned. But it also added a layer of inspiration to the work.

“We wanted to showcase that, despite the hardships of 2020, there still was beauty to be found,” Brad said.

Brad’s image is of Comet NEOWISE over Big Sable Point Lighthouse at Ludington State Park. Gaudette’s is of a particle ray during sunset at Stearns Park beach.

The two images were placed earlier this week in preparation for Thursday. The 72-inch by 48 inch images were placed back-to-back at the BOB, 20 Monroe Ave. NW, Grand Rapids. Gaudette said the city was buzzing with anticipation for ArtPrize’s return.

“Everybody’s just excited. You could just feel the energy,” Gaudette said. “Everyone’s really happy to have (ArtPrize) back.”

This year is Brad’s 11th time participating in ArtPrize and Gaudette’s fourth.

“We are both very excited for ArtPrize to be back on,” Brad said. “It’s a fantastic display of art, and we are fortunate to have something like this in our state.”

Todd Reed’s project comes from his recent book, “50 Years of Seeing Michigan Through a Lens,” which is a retrospective of his half-century photographing the area in both journalistic and creative capacities.

“2020 was my 50th year of photographing Michigan,” Todd told the Daily News. “I knew I wanted to include an image from my book in this year’s ArtPrize competition.”

The photo he selected is called “Todd’s Destiny,” and it was taken on Nov. 1, 2020, during a storm on Lake Michigan.

“I observed this storm for more than three hours, photographing during times of peak waves and peak light,” he said. “The light in particular changed dramatically. This was one of the rare moments when the waves were the brightest and the storm clouds the darkest. I watch and wait a lot, yet try to remain always ready to trip the shutter.”

The image has been printed on 48-inch by 72-inch metal surface.

Like his son, Todd has participated in ArtPrize for 11 years.

“Team Reed loves to be part of the ArtPrize grand celebration of the arts,” he said. “We are especially pleased to be among the photographers showcasing photography as art form.”

“Todd’s Destiny” is also on display at the BOB.

Laurel Prafke of Ludington is an art teacher at Mason County Eastern Schools. She’s participated in ArtPrize many times, and she’s entering her oil painting, “An Apple A Day,” in this year’s competition.

The 8-inch by 10-inch painting depicts an apple ready for picking in a Mason County orchard.

Prafke said she likes to “get out and paint” as much as possible, but in 2020, she was apprehensive about doing so because of COVID-19. She did manage to get out and capture a few outdoor scenes, however, such as the one she’s entered in this year’s competition.

“I try to paint when I can, but it’s harder with school because I’m more tied up. And I was looking for a break to get out and paint,” she said.

Prafke said she “lucked out” on the October 2020 day when the painting was completed. She found some idyllic apple-orchard scenery on Meisenheimer Road, and was given permission by an orchard owner to paint what she saw.

“It was the last day of the last week to pick apples, and that’s what it’s all about. Being outside is the best part for me,” she said. “I really enjoyed painting those apples. I really strived to get the sense of light (right).”

She said her aim was to capture an image as the human eye would, not as a camera would, with the focus only on just one apple.

“The goal was to define what I was really seeing,” she said. “It really represents last year for me, because I had very few paintings last year, so it was easy for me to place that into ArtPrize.”

“An Apple a Day” is on display at Bagel Beanery, 455 Michigan St., Grand Rapids.

Raine Eisenlohr of Fountain is entering ArtPrize for the first time.

Eisenlohr’s submission is a wood and pyrography piece titled “Rebirth and Decay.” It’s 1 inch thick, 21 inches wide, 35 inches in height and was created this year.

“Rebirth and Decay” depicts a woodworked, lichen-covered forest figure, with strings connecting its fingers to a mushroom-covered whale in a puppeteer pose.

The process of decay is fascinating for Eisenlohr, and the look of the piece was inspired by the artist’s surroundings in the rural Michigan woods.

“Decay is just as important in nature as growth. Fungi and lichens are present at the end of a life, but at the beginning of new life as well,” Eisenlohr said. “Fungi are not only stewards of the land, but interconnect life in the forest to create a shared consciousness.

“Living in the woodlands of Michigan has deepened my connection with all that grows here, down to the small lichens that live among our trees and mosses. The cycles of life and nature are beautiful to witness as even after there has been destruction, death and decay, life goes on and is reborn again.”

The piece was completed during the summer.

“I am a pyrographer — wood-burner — and a woodworker, so both of these mediums went into creating this piece,” Eisenlohr said. “After cutting the wood to shape with a scroll saw, I then went in and wood-burned by hand. I added more depth and life to the piece with watercolor.”

When Eisenlohr started working on the piece, she had no intention of entering it in ArtPrize, but she said the pandemic gave her ample time to hone and further develop her skills, and “everything just seemed to fall into place.”

“If there is one thing I am grateful to have come from this time, it would be this,” Eisenlohr said.

Carrie Jeruzal and her students have entered collaborative pieces in ArtPrize before, submitting a fiber art installation in 2017. This year’s entry features more than 50 hanging, moving, wooden, painted butterfly sculptures made by students. Jeruzal said it was inspired by a school trip to Costa Rica.

“A group of butterflies is called a kaleidoscope, so our installation is called, ‘Kinetic Kaleidoscope.’ The wooden pieces were cut by members of the Pentwater Artisan Center and then students in grades 6-12 last year painted and assembled them,” Jeruzal said.

The piece was completed in the spring. Students worked on the project both at home and in school. The pieces themselves vary greatly from student to student.

“Depending on the student’s level, each one drew upon differing themes for their butterfly design,” Jeruzal said. “For example, one focuses on the scientific butterfly migration and is painted very realistically, another is a metaphor for becoming or transforming into an adult and is painted with Grand Valley college logos, another symbolizes emerging from the pandemic and shows medical symbols as well as symbols for life and death. Each one is different, just like the student that painted it.”

“Eco Opportunity,” by David Masten of Walhalla, is a statement about the environment, and the amount of excess plastic waste in the world.

Masten wanted to do something to shine a light on the issue. As ArtPrize approached, he said the idea for an entry began to coalesce in his head.

“’Eco Opportunity’ evolved from my growing frustration with all of the plastic waste I was seeing — trash, mostly plastic, that I was seeing along the roads, in our small lake and along the Lake Michigan shore. It seemed like the world was drowning in plastic,” Masten said.

The piece is made using plastic from Masten’s household. It shows the world covered in wrappers and packaging — a plastic-covered sideview of the planet.

“Almost all of it is single-use,” he said. “I made the piece 8 feet in diameter because I felt it was necessary to be big enough to quickly catch someone’s attention and draw them in for a closer look. I’m hoping this piece will encourage others to reduce, reuse and recycle.”

“Eco Opportunity” is Masten’s third ArtPrize entry. He said he missed the event during its absence, but he welcomes the bi-annual schedule.

“I do love ArtPrize because it takes ‘art’ out of the more formal settings of galleries and art museums and instead spreads it all around town, making it much more accessible and attractive to so many people who either don’t have time or access to traditional art exhibitions,” he said. “It’s truly ‘street-level’ art, and it’s sometimes wacky and weird, often whimsical, and occasionally breathtaking. It’s just a whole lot of fun in a non-traditional community kind of way.”

ArtPrize runs until Oct. 3, with works displayed throughout Grand Rapids. The public will get to choose which artist receives $250,000 in prizes, including a $50,000 grand prize.

Artists from Ludington and other surrounding communities are on display for ArtPrize in Grand Rapids. The locations of the entries are as follows: