From left, Leslie Best, Amy Heer and Patricia Dancz share stories while talking about the 25 years they have worked as 911 dispatchers at the Mason-Oceana 911 Center last week. Today is their 25th anniversary of their first day of training at the center. This year will mark the 25th anniversary of 911 dispatch’s center, it officially went online on Sept. 11, 1995 at 9:11 p.m. 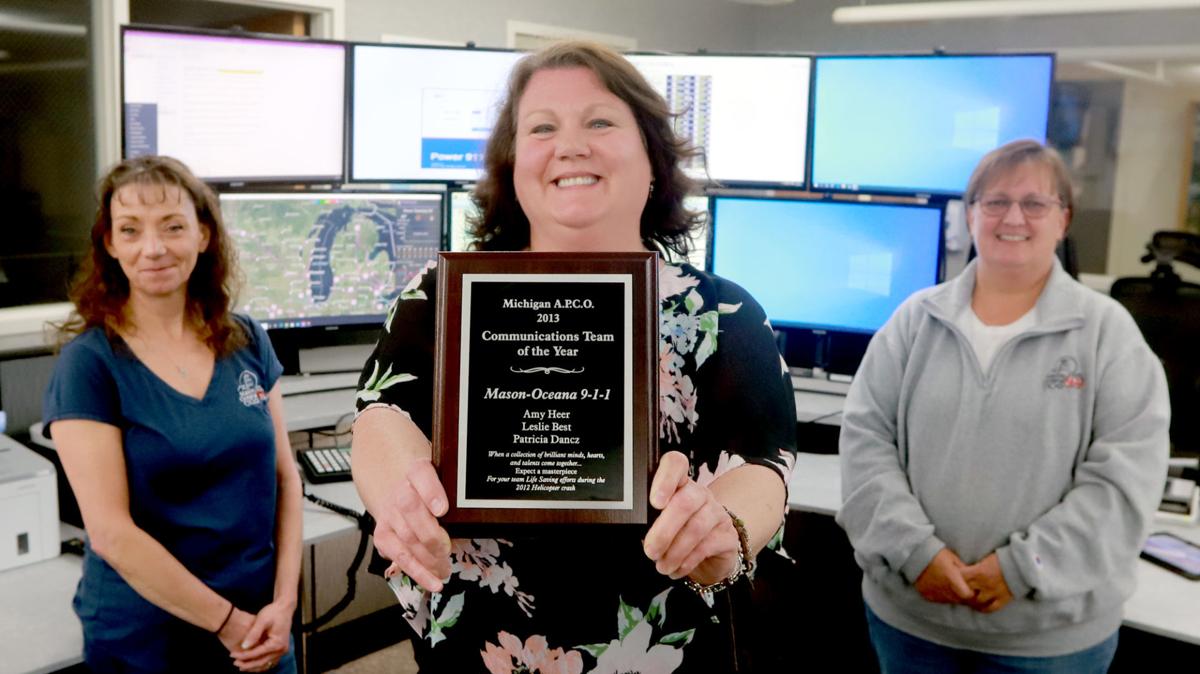 The three earned the communications team of the year in 2013 for their efforts in team life saving during a 2012 helicopter crash in Oceana County. 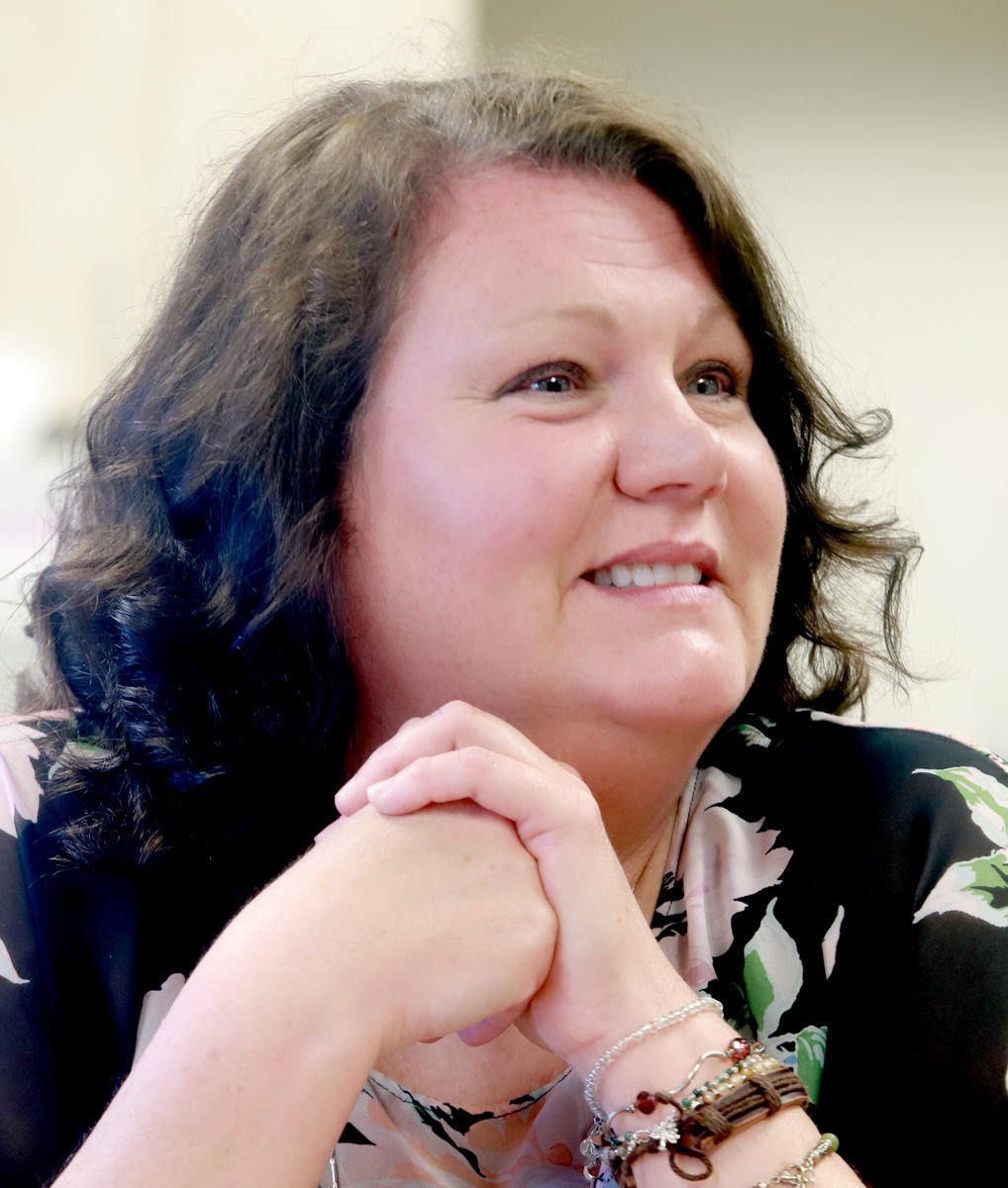 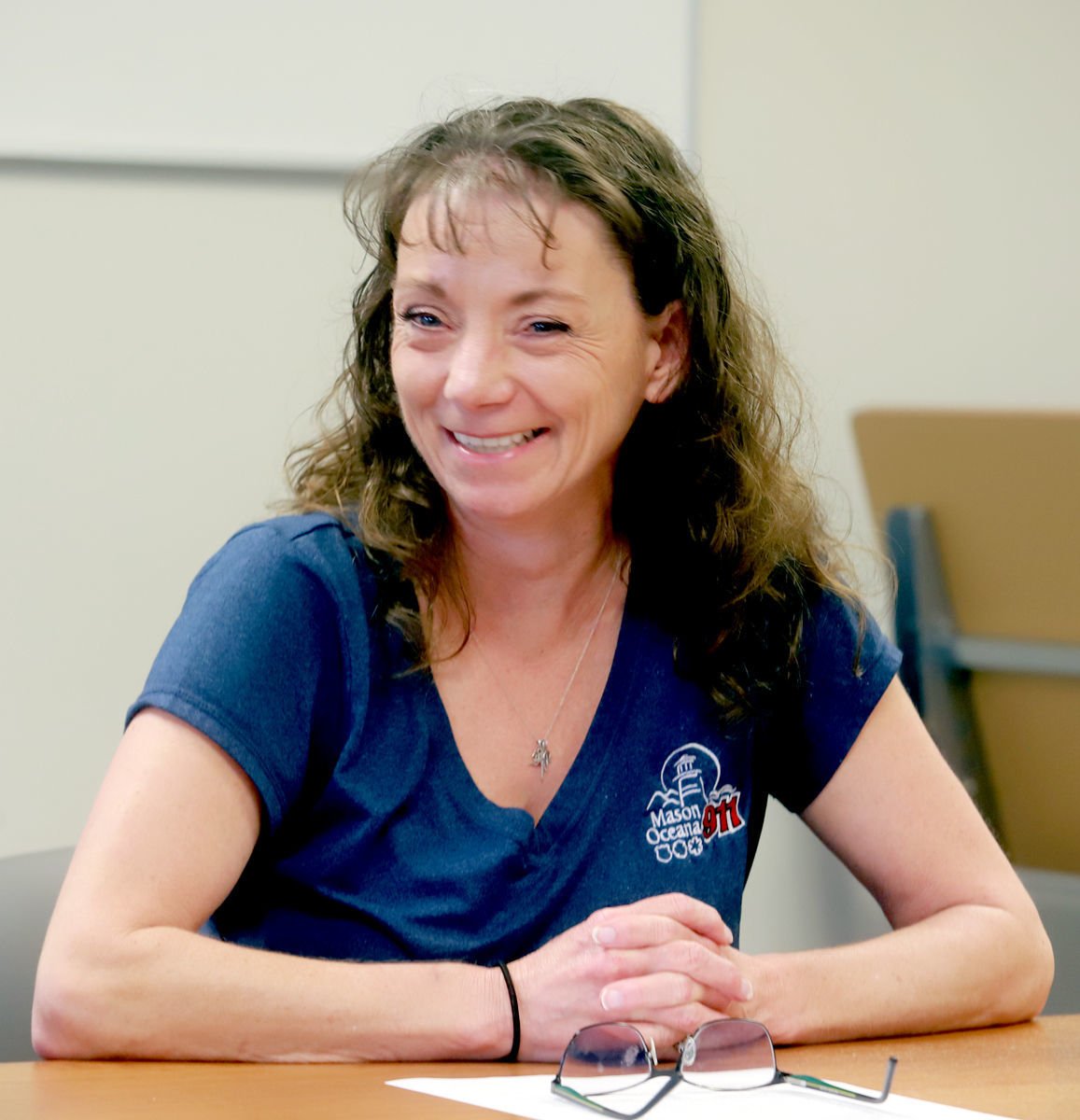 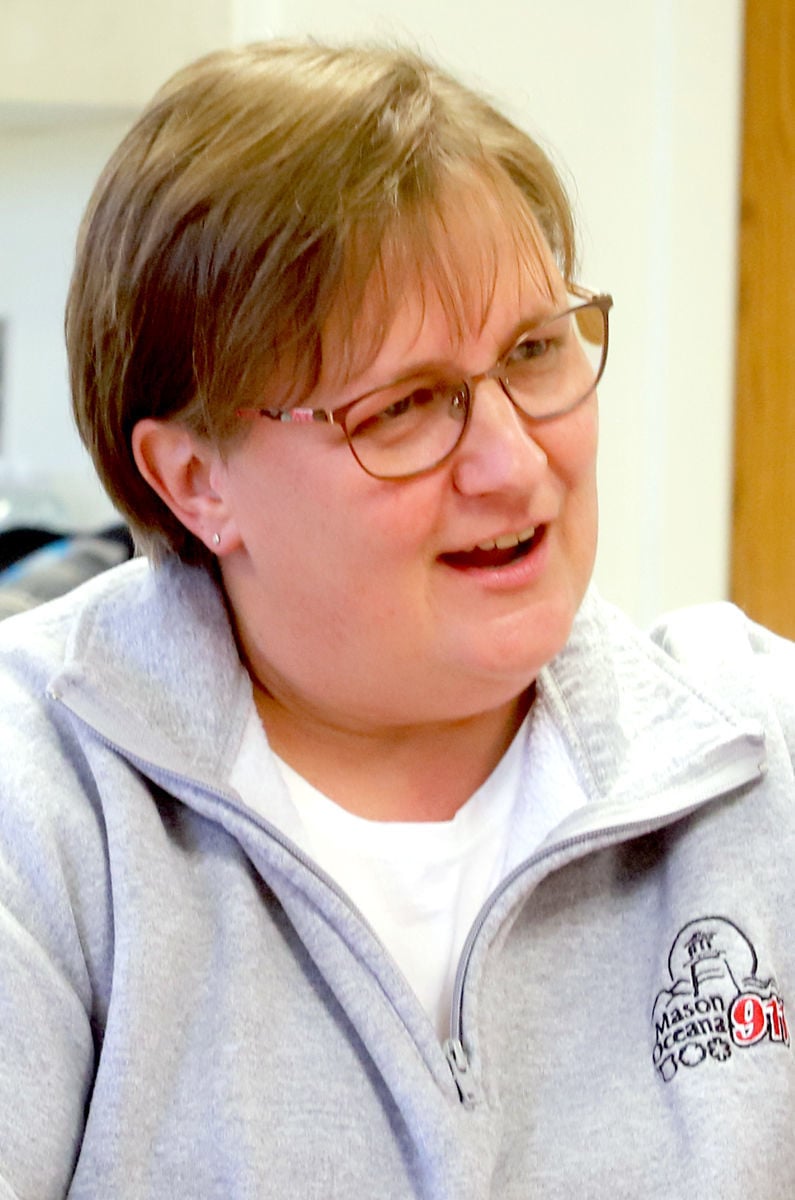 From left, Leslie Best, Amy Heer and Patricia Dancz share stories while talking about the 25 years they have worked as 911 dispatchers at the Mason-Oceana 911 Center last week. Today is their 25th anniversary of their first day of training at the center. This year will mark the 25th anniversary of 911 dispatch’s center, it officially went online on Sept. 11, 1995 at 9:11 p.m.

The three earned the communications team of the year in 2013 for their efforts in team life saving during a 2012 helicopter crash in Oceana County.

Friday also marks a significant day for three members of the dispatch team. Three of the original dispatchers who were hired on May 22, 1995, to begin training prior to the center going online in September are marking their 25th work anniversary.

The three dispatchers are Leslie Best, Patricia Dancz and Amy Heer. They share a bond that many outside of the telecommunication field may never experience.

“All three started training in 1995,” said Ray Hasil, Mason-Oceana 911 dispatch director. “There was no training manual back then. This is a place that started from scratch. It was a baptism by fire.”

The creation of Mason-Oceana 911 started in 1991, and the service began for each county in February 1993. But the call center in Pentwater wasn’t started until 1995, and it needed to train the dispatchers starting in the summer ahead of the September opening.

Beth said training really consisted of driving both counties, making a list of all of the street numbers.

“The street numbers, back then, did not make any sense,” she said. “We would go to a town and park, then walk the streets taking notes. You would have an address of 105 here and a 305 next door.”

There was no consistency until the townships came in and set consistent addressing, Best said.

Heer said on her first shift, she covered Mason County and her radio, unfortunately, did not work.

“I thought that was wonderful,” she said as she and the room broke into laughter and the three have shared many laughs, tears, hugs and prayers through the past 25 years.

The three have a bond that is not commonly built between co-workers but more like family.

Heer remembers the room being packed, filled with people from both counties. She said it was hot and nerves were high.

“If you could have had a survival you would have wanted a barf bag,” said Best.

“And ‘Depend,’” Heer said. “It was stressful but we all survived.”

Technology would have to be the biggest change over the years, Heer said.

“Cell phones have to be the biggest,” she said. “I remember when you used to carry them in a bag, now everyone has one.”

Dancz said in the beginning, the center depended on landlines.

“When we first started we were using punch cards,” Heer said. “When you get a call, you would fill in the location of the caller, the caller’s phone number and then have the card time stamped and keep a status on the responder.”

Dancz said if it was a busy night you would have stacks of cards in front of you.

Since August 2003, Hasil estimated Dancz handled 34,000 calls to 911 with Best handling 38,500 and Heer 48,000. Each also took tens of thousands of checks of drivers in traffic stops along with thousands of medical responses and car-deer crashes.

There were highs and lows with their jobs, and Heer remembers one being the most hectic.

It happened Oct. 24, 2010. Heer, Best and Kris Kokx were working in the early afternoon. Kokx took a call, the call came from Silver Lake out by the dam.

A couple found a gentleman on the ground unresponsive and blue, they started CPR, Kokx was on the phone giving instructions and getting update.

“It was my great idea to ask if there was a vehicle nearby,” Heer said. “I thought we could run the vehicle to see who this individual was and see if we can contact family.”

Kokx ran the plate and she come over to Heer and gave her a grip of death.

“It was my husband,” Heer said. “And he did not make it. It was the worst time.”

Probably the hardest call Dancz said she took was a gentleman who drank toilet bowl cleaner to kill himself, she said.

“As I am talking to him, he had changed his mind didn’t want to die and he died on the phone with us,” Dancz said. “I heard his last breaths.”

“There can be a really dark side to working this job,” Hasil said. “In 911, we don’t have to see those things with our eyes, like the others responders do. However, we are always the very first person that they talk to when something is discovered. They have heard all of the screams over the phones from a mother that has found out their son committed suicide and phone calls from people involved in a car accident.”

Hasil said dispatchers do not want to see what the things look like, but at the same time, your brain draws this images of what the scene might have looked like.

“I think there is something to say about at least the responders have some sort of closure by seeing and being able to process it, he said. “For people in this field of work, it can get to you because you’re making up the pictures of what it probably looked like yourself.

“We would laugh at stuff where I think other people would think we are cold, but that is one of the ways that you process some of the stuff that you hear as a telecommunicator,” Hasil said. “They have 25 years of that, and thats a lot of calls.”

Dancz said the longer you work this job the more you get used to dealing with all of the things that happen during it.

“I thing experience helps,” Dancz. “The longer you do this job the more you get used to the bad stuff and how to handle the bad stuff and left go of it. I remember some of my first bad stuff, going home and crying and asking myself what am I doing here,” Dancz said.

The other aspect of being a dispatcher is the schedule, working nights, holidays, weekends.

“Holidays do not necessarily fall on holidays,” Best said. “My kids always thought that Santa and the Easter Bunny came whenever mom was off.”

Mason-Oceana 911 Director Ray Hasil made a list of all of the calls the three original and current dispatchers — Leslie Beth, Patricia Dancz and Amy Heer — have handled since August 2003 where records are available.