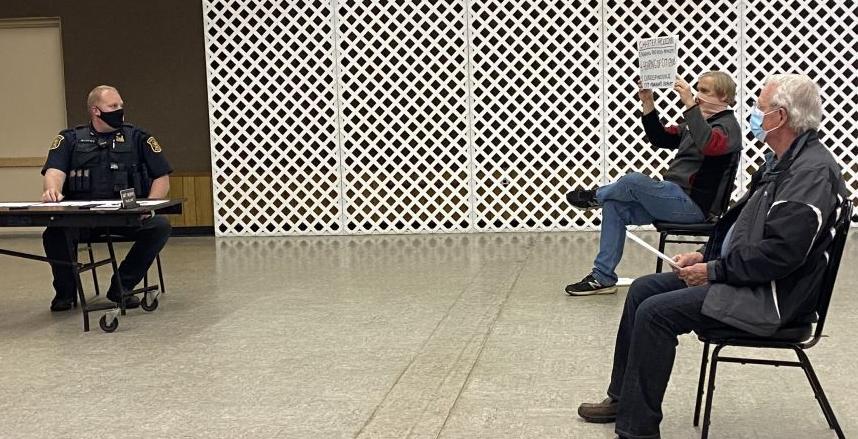 Ludington resident Tom Rotta was removed from Monday's meeting of the Scottville City Commission after refusing to lower a sign that officials said caused a disturbance. Rotta was speaking out about a recent change to the meeting format, which decreased the number of public comment periods. 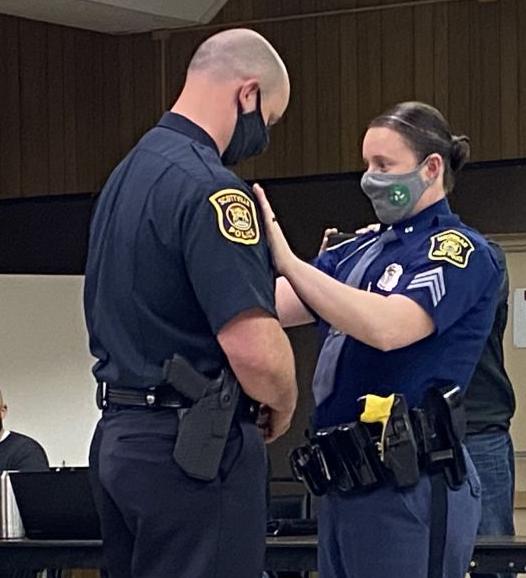 Ludington resident Tom Rotta was removed from Monday's meeting of the Scottville City Commission after refusing to lower a sign that officials said caused a disturbance. Rotta was speaking out about a recent change to the meeting format, which decreased the number of public comment periods.

SCOTTVILLE — O’Neil James “Jimmy” Newkirk has accepted a job offer with the City of Scottville to serve as the next city manager, and he will formally sign an employment contract sometime this week, according to Mayor Marcy Spencer.

Spencer made this announcement during Monday’s meeting of the city commission at Optimist Hall.

The agenda was amended to include an item authorizing Spencer to execute the city manager’s agreement. Spencer updated the commission stating that, after the release of the packet for the commission meeting on Friday afternoon, Newkirk OK’d the job offer from the city and agreed to formally sign a contract when he arrives in the city.

“A job offer was sent to Mr. Newkirk, and, upon his acceptance, a contract was drafted following the terms of the offer, and he has accepted the contract verbally,” Spencer said.

Spencer said she expected Newkirk will be at city hall to sign the contract and make things official on Wednesday.

“I think we’ll be very happy with him,” she said.

City Attorney Carlos Alvarado, who was not in attendance at Monday’s meeting, stated that the details of the contract will be released once it is formally signed.

Murphy outlined Case’s progress to the commission, including his pas career highlights and his exemplary performance at the academy.

“Steve was sponsored to attend the West Shore Community College Police Academy by the City of Scottville, and once again has exceeded expectations,” Murphy said. “He’s graduated the police academy with high honors and a 4.0 GPA. Steve was awarded the Outstanding Performance Award from Michigan Commission on Law Enforcement Standards for being at the top of his class.”

Murphy noted that only 20 cadets receive this award each year.

Case was given his pin by Tpr. Kelsey Case of the Michigan State Police, as commissioners and members of the public applauded.

Ludington resident Tom Rotta was removed from Monday’s meeting for “causing a disturbance,” after refusing to stop holding up a sign that included language about the city’s charter.

For the past several meetings, since Spencer altered the city’s meeting format to include only one public comment period, Rotta has regularly spoken out against the decision, stating that it went against the city’s own charter.

The change was initiated on April 5, and on April 19, the commission unanimously passed a resolution to make it the new format moving forward.

That resolution stated that procedures, including public comment, outlined in the city charter can be suspended in accordance with parliamentary procedure, which allows the presiding officer, Spencer, to set the agenda.

The city stated that the resolution was in accordance with the Michigan Open Meetings Act, and that citizens still had time to address the public body during meetings.

At the start of the meeting, Spencer asked Rotta to take down his sign, saying that it was causing a disturbance. He refused, and Police Chief Matt Murphy said that if Rotta did not remove the sign, he would be asked to leave the meeting.

After some back-and-forth, Rotta put the sign down, then appeared to reach for it again.

Murphy gave him yet another verbal warning. Rotta picked the sign back up, asked what was wrong with it, and Murphy and Case escorted Rotta from the Optimist Hall.

Rotta spent the remainder of the meeting standing outside the entrance, holding the sign up in the commissioners’ view.

The city also approved a draft budget for 2021-22. Spencer noted that the approval merely starts the process, and that the budget will be advertised in local media before being brought back to the city commission in 30 days’ time for formal approval.

The city approved sending a handful of proposed fee increases for camping at Riverside Park to the park committee for consideration. The committee will review the increases at its meeting next week. The proposals will be brought back to the commission at a later date for further consideration.

During the public comment period, a Riverside Park camper, Tom Bingham, asked that the proposed rate increases be tabled.

“It doesn’t compare, apples to oranges, to other campgrounds in the area,” he said.

Spencer encouraged him to attend the upcoming parks and recreation meeting.