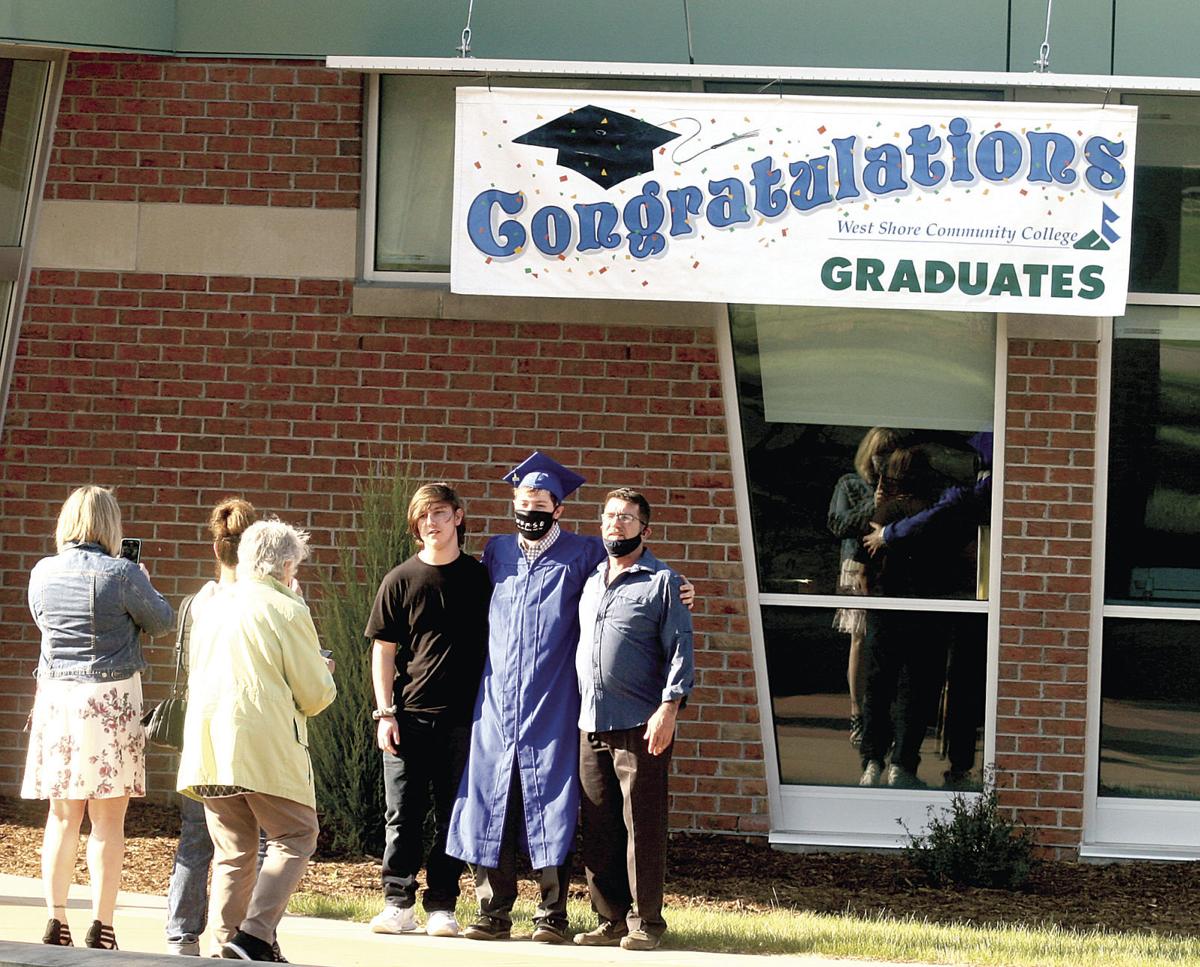 A graduate and his family pose for a photo prior to Thursday’s West Shore Community College’s nursing program graduation. 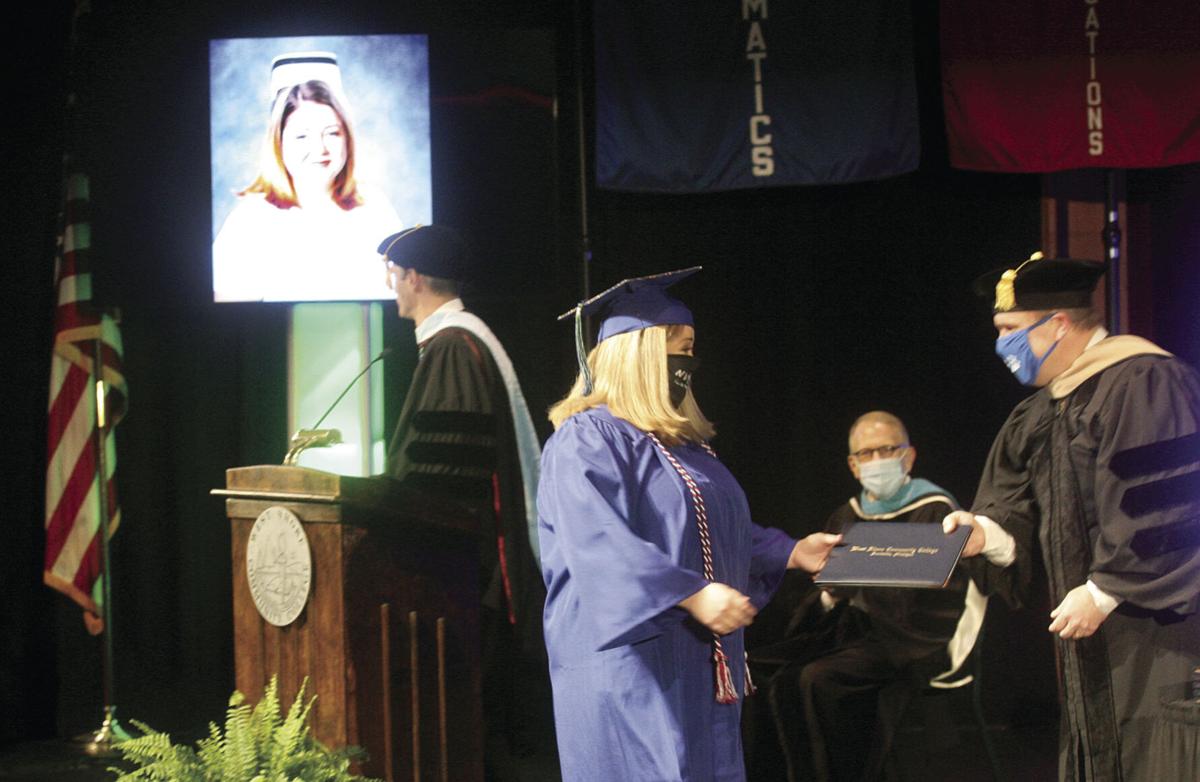 Misty Rederstorf walks across Center Stage Theater on the campus of West Shore Community College Thursday as she graduates from the nursing program. Thursday’s graduation ceremony was the first for the college with more to come. 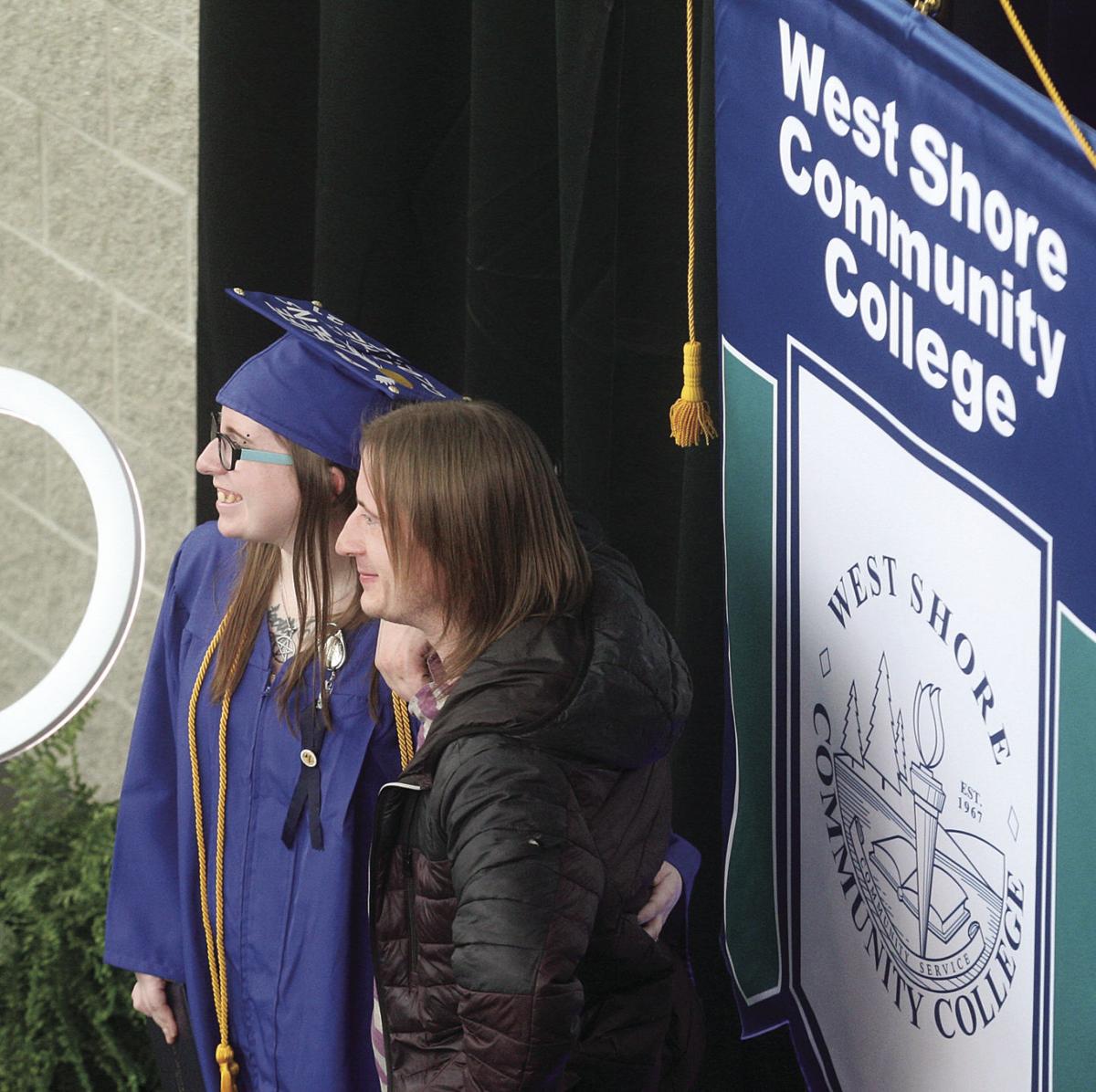 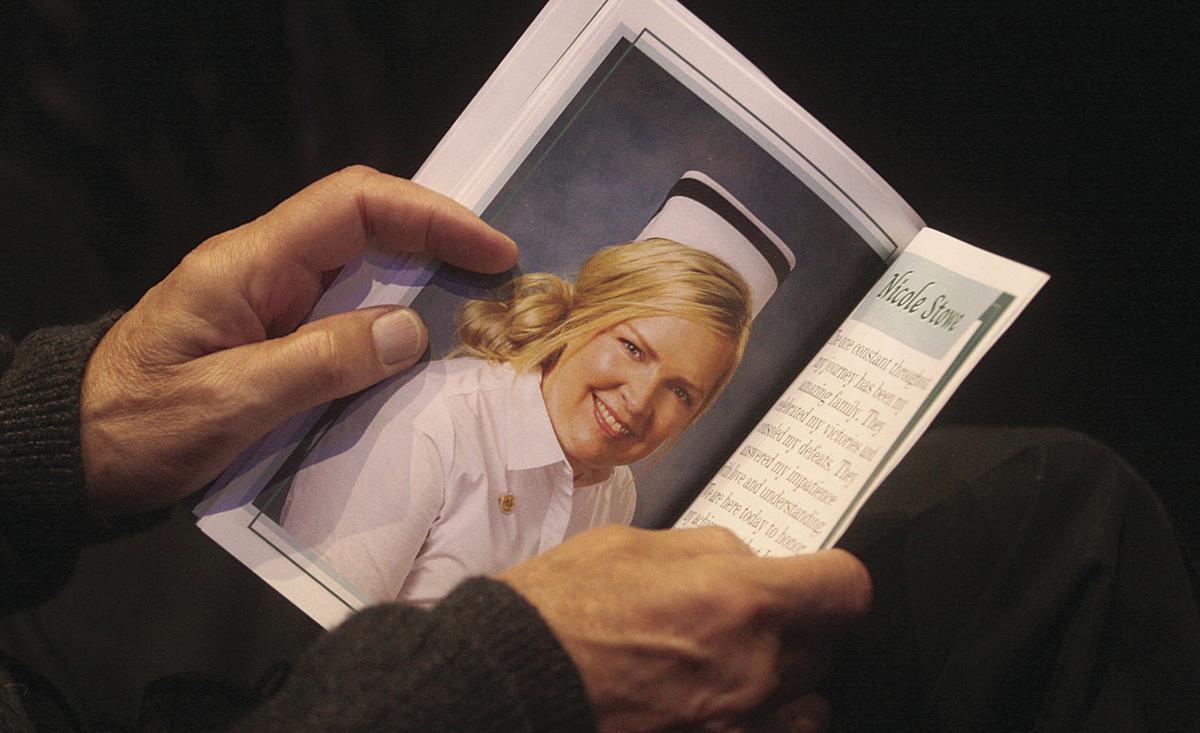 A crowd member looks through the nursing graduation program prior to the start of Thursday’s graduation. 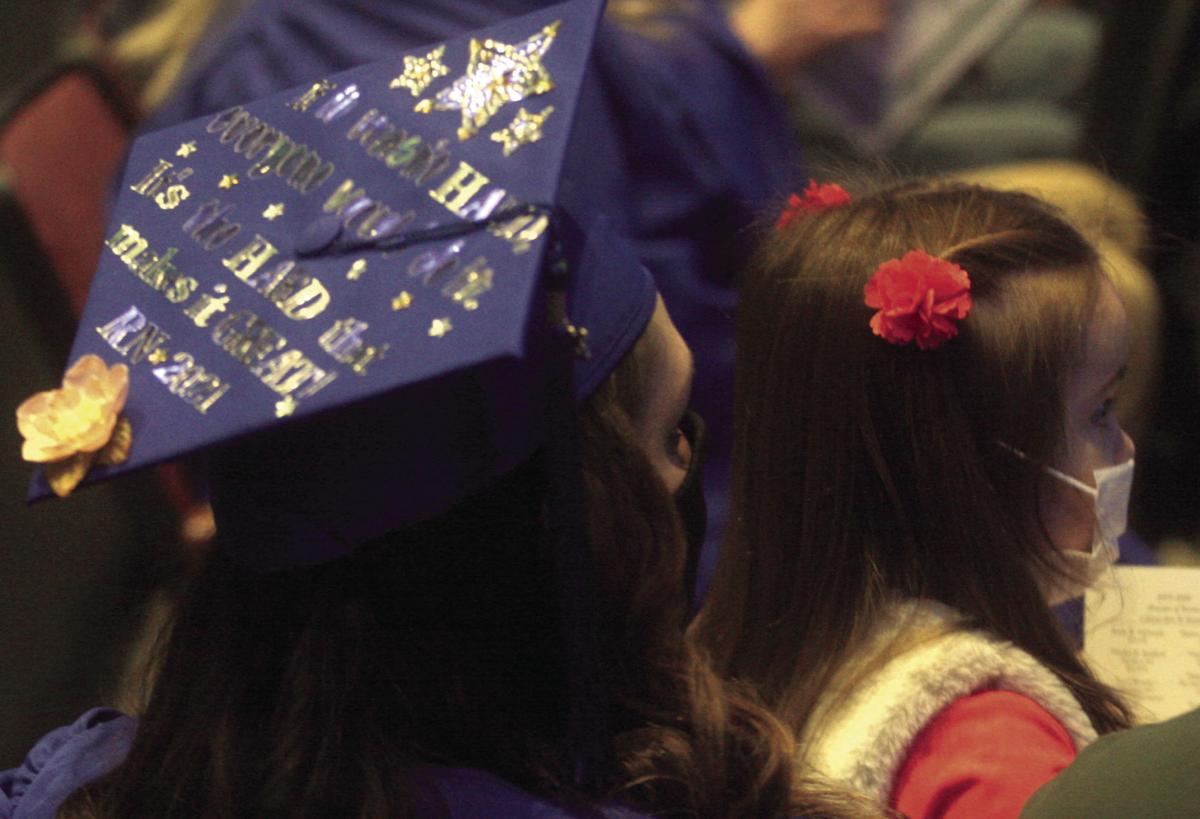 Many graduates decorated their caps for Thursday’s nursing program graduation.

A graduate and his family pose for a photo prior to Thursday’s West Shore Community College’s nursing program graduation.

Misty Rederstorf walks across Center Stage Theater on the campus of West Shore Community College Thursday as she graduates from the nursing program. Thursday’s graduation ceremony was the first for the college with more to come.

A crowd member looks through the nursing graduation program prior to the start of Thursday’s graduation.

Many graduates decorated their caps for Thursday’s nursing program graduation.

VICTORY TWP. — Nineteen freshly minted graduates from West Shore Community College’s nursing program emerged from the college’s Center Stage Theater on Thursday night into the next chapters of their lives.

Graduates wore masks fashioned after the sitcom “Friends” that declared: “NURSE — I’ll Be There For You” in the show’s recognizable font. Before the ceremony, the show’s theme song played over a slideshow of pictures taken over the course of the students’ time at WSCC.

“It’s a big weight off my shoulders,” said Manistee graduate Joseph Kutchinski. “It takes a lot of mental, physical and emotional strength to get through (the program). I’m just glad it’s over.”

Ludington graduate Mackenzie Luce said that while the last year has been especially “stressful,” she’s hoping to get the chance to launch her career in her hometown and put it behind her.

“I think everyone in the program handled it really well,” Luce said. “We were able to finish and get done when we needed to, so I was thankful for that.”

About 60 attendants were there to celebrate the graduates, spaced around the auditorium in family clusters and separated by black clothes draped over seats. More than 500 more people watched the proceedings on Facebook.

“While the pandemic has required us to socially distance ourselves from others, it has not taken away opportunities to celebrate student achievement and success,” WSCC President Scott Ward said. “This commencement serves as a fine example of what we have collectively achieved in the past few years.

Henne compared the graduates to bees that have lately been pollinating crocus flowers in his backyard. Like the bees in early spring, the class has had to work together to make the best of scarcity and hardship.

“Things will get better for us this year, no doubt, but we aren’t all the way through this pandemic yet,” he said. “Even when we get there, there will be new challenges to face as our communities grieve, and heal, and move on to look for the next patch of crocus.”

Townsend shared her own story as an example of what a turbulent year it’s been for students.

She followed up last year’s switch to virtual classes with 13 weeks of basic combat training in Oklahoma. Townsend and 85 percent of her unit tested positive for COVID-19, she said.

When she came back home as a soldier in the Michigan Army National Guard, she started classes two days later. She would later test positive for COVID-19 again, along with her grandmother, who survived.

Repeating the phrase “Don’t do it,” Wyman called on the graduates to never back down from a challenge or shy away from a learning opportunity.

“When life hands you a hard season, and you want to believe difficulty is all there is, don’t do it,” she said.

Over a slideshow of images evoking the pandemic, like school desks separated by barriers and a long line of cars waiting at a food bank, the WSCC Virtual Choir performed “You Will Be Found” from the musical “Dear Evan Hansen.”

Family members, rather than faculty, pinned the new nurses — just one adjustment made due to the pandemic. The pinning ceremony commemorates Florence Nightingale and sometimes follows commencements for nurses.

WSCC’s class of 2021 is divided across eight graduation ceremonies from Thursday, April 29, to Saturday, May 1.

Most students will walk in one of six ceremonies, while nursing and criminal justice students have ceremonies dedicated to them.

WSCC did not hold a formal commencement ceremony last spring due to the coronavirus pandemic.

To keep all in attendance safe, each ceremony is limited to 25 graduates and three guests per student. Families will be seated apart from each other. Social distancing and masks are required.

Each ceremony is expected to last less than an hour. The theater will be “thoroughly cleaned” between each ceremony, Executive Director of College Relations Thom Hawley said.

All eight ceremonies will be held in the Center Stage Theater on WSCC’s campus and streamed to the college’s website and Facebook Live for those unable to attend.

The schedule of upcoming ceremonies is as follows: