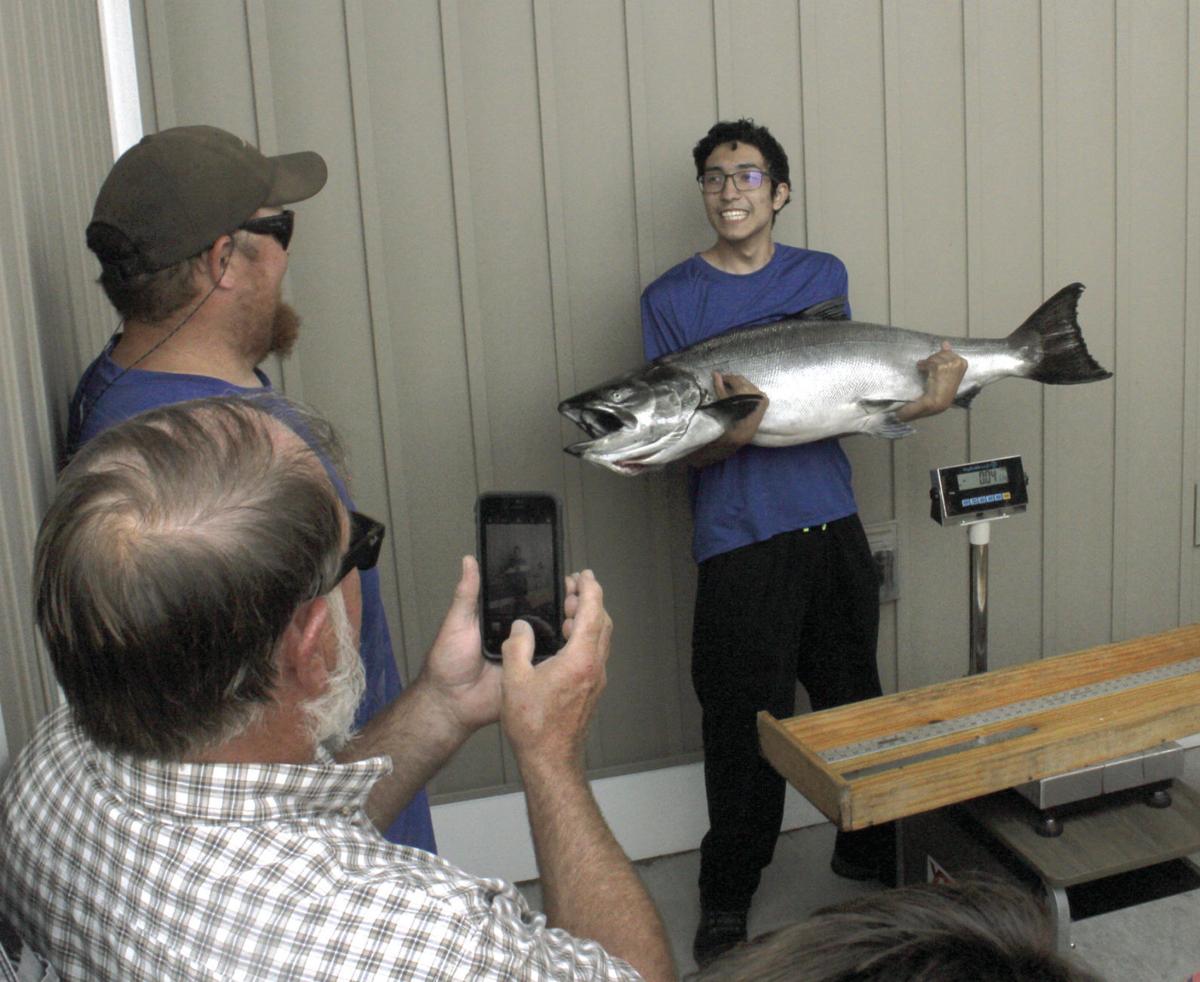 Louis Martinez, 19, of Ortonville, smiles as he looks over to Icebreaker Charters Capt. Bobby Sullivan Saturday afternoon as Martinez holds a new Michigan state record Chinook salmon outside Captain Chuck’s II in Ludington. Martinez and his family chartered with Sullivan and caught the 47.86-pound, 47 1/2-inch Chinook salmon off of Big Sable Point on Lake Michigan. 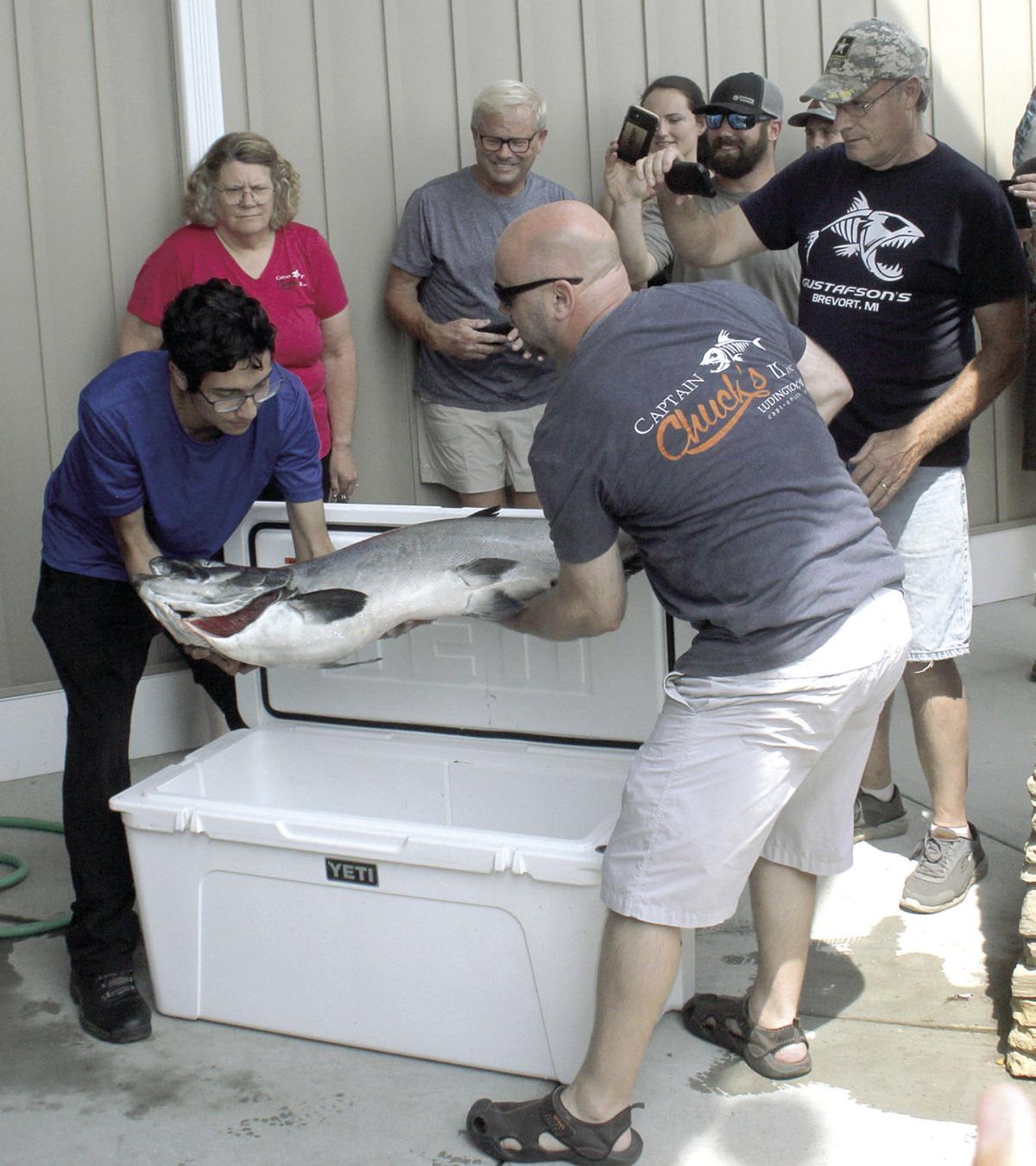 Louis Martinez, 19, of Ortonville, left, and Captain Chuck’s II Co-Owner Scott Keegstra lift up a new Michigan state record Chinook salmon out of a cooler Saturday afternoon outside Captain Chuck’s II in Ludington. The fish broke a record from 1978, weighing in at 47.86 pounds and measuring 47 1/2 inches.

Louis Martinez, 19, of Ortonville, smiles as he looks over to Icebreaker Charters Capt. Bobby Sullivan Saturday afternoon as Martinez holds a new Michigan state record Chinook salmon outside Captain Chuck’s II in Ludington. Martinez and his family chartered with Sullivan and caught the 47.86-pound, 47 1/2-inch Chinook salmon off of Big Sable Point on Lake Michigan.

Louis Martinez, 19, of Ortonville, left, and Captain Chuck’s II Co-Owner Scott Keegstra lift up a new Michigan state record Chinook salmon out of a cooler Saturday afternoon outside Captain Chuck’s II in Ludington. The fish broke a record from 1978, weighing in at 47.86 pounds and measuring 47 1/2 inches.

Louis Martinez of Ortonville wasn’t quite sure.

Icebreaker Charters Capt. Bobby Sullivan was starting to have doubts, too.

Once Sullivan brought in Martinez and his family back to Ray’s Auto Marine weighed the Chinook salmon Martinez caught Saturday morning, the race was on to see just how big of a fish was caught off of Big Sable Point in Lake Michigan.

A short time later, it was confirmed — Martinez pulled in a 47.86-pound, 47 1/2-inch Chinook salmon that set a new Michigan state record. The previous state record was 46.06 pounds and 43 1/2 inches caught in 1978 from snagging on the Grand River in Kent County.

“The first 10 minutes were quite a fight,” Martinez said. “Around the 20s, 30s (minutes or so), he started jumping out of the water. That’s when we pulled it out and landed it in the boat.

“The captain was so happy. (Sullivan) was screaming,” he said.

Saturday was the first time Martinez went out salmon fishing, and he was with his mom Maria Lemaster, sister Ale Martinez and stepdad David Lemaster.

“We come every year, my husband and I love to go fishing,” Maria Lemaster said. “Every time I invited them to come along, and this year, for some reason, they decided to go.”

Around 7 a.m. is when the fish first struck the line.

Lemaster said they knew they had a large fish on the line right away.

“The reel started screaming,” she said. “It went a lot quicker than I was suspecting.”

Sullivan said it took out about 350 feet of line, and he said he was starting to think that he didn’t have enough line. He did, though.

“It took that one big run and then it turned around, and I don’t know it took a run once (Martinez) started gaining line,” Sullivan said. “The fish got into a couple of boards on the one side, but once we got that untangled, and we got it on-board, I just said, oh, man, this thing is a giant.”

As Martinez was reeling in the fish, Sullivan said he slowed down his boat a little bit. Martinez said he felt a bit sore as he was reeling it in.

There was lots of screaming, and videos and some pictures, too.

But then the doubts started to creep in a bit.

“When it hit the floor, I said, ‘This thing is big.’ And then I started second-guessing myself,” Sullivan said. “I thought it was pushing 40. I told (Martinez), ‘You don’t realize what you just caught.’

“Little did I know, when I weighed it at Ray’s, and I put it on the scale, and I was like…”

Sullivan said that because the record-breaking fish was brought in around 7:30 a.m. or so, they stayed out and caught one more fish before heading back to Ray’s Auto Marine.

There, on an uncertified scale, it tipped the scales at more than 47 pounds.

They put the fish on plenty of ice, and Sullivan’s fellow charter boat captains began to congratulate him.

“He was up at the cleaning station and he had it on the scale, and he said, that scale can’t be right,” said Doug Strzynski, captain of Pole Cat. “I said, ‘Bobby that’s a 47. I’ve caught 37s. I know. He hung up on scale again. I told him that scale is right. Bobby the girth in that is unbelievable.”

Strzynski said the camaraderie between all of the captains where they are is really good.

“Our dock is wonderful. Everyone is sharing in how each of us do. We don’t care who catches the most.”

Sullivan runs 350-foot weighted steel line with a 30-pound monofiliment leader. The rod also had a couple hundred feet of 60-pound braided superline backing. It was on a Okuma-brand rod and reel.

He fishes in 28 1/2-foot Baja Cruiser, and Sullivan estimated that the line was at around 60 to 65 feet deep in 200 feet of water near Big Sable Point.“

When I was running up there, I stayed to the outside (of the dozens of boats fishing there Saturday morning),” Sullivan said. “And I’m glad I did.”

The record was caught with a Magnum Moonshine Raspberry Carbon Spoon. The lure is now Martinez’s.

Sullivan is in his fifth season as a charter boat captain, and he splits his year between Lake Huron and Saginaw Bay and Lake Michigan. He said he typically spends July and August fishing for salmon along Lake Michigan.

After getting to Ray’s Marina and measuring it, the family and charter headed to Captain Chuck’s II to get it weighed and see about getting it certified.

“They called and said they have a 47-pound king salmon they wanted to weigh,” Captain Chuck’s II co-owner Scott Keegstra said. “We have a derby going on. It’s our first derby, and Bobby from Icebreaker is in that derby. When they said 47 pounds, you don’t know what to think.”

Keegstra then was able to take a look at the catch.

“The minute I saw it, I was like, holy crap, that’s huge,” he said. “We put it on the scale, and it flew past 47 (pounds), and instantly I knew it was uncharted territory. It’s a state record.”

Keegstra made arrangements with Mike Krueger at Northside Market after talking to Jay Wesley, the Lake Michigan basin coordinator for the Department of Natural Resources, to weigh the fish on a certified scale — something needed when looking at setting a new state record.

“(Krueger’s) scale, being certified, the official weight was 47.86 (pounds),” Keegstra said. “It was just unbelievable.”

Wesley left his home in Kalamazoo Saturday, reviewed the paperwork and then certified the new state record fish. He announced it as a crowd of dozens watched and crowded in to get a glimpse of the new record.

“I didn’t know if we’d ever see a new record, but we’ve been hitting 40 pounds or close in the last few years,” Wesley said. “I was working in my garage and told my wife, ‘I’m heading to Ludington. I’ve got to see this thing.’”

Wesley said the Muskegon area has seen some Chinook salmon at 40-plus pounds. Wisconsin also is registering large fish, too.

“Unbelievable to have 47 pounds,” Wesley said. “In fact, the last state record was in 1978, and it was snagged in the Grand River. To have this one to officially bite a lure, caught out in Lake Michigan and caught in the salmon capital of Michigan, Ludington, is pretty amazing.”

The fish is likely a new record for Lake Michigan. Online records indicate fish less than 40 pounds caught in Indiana and Illinois while a 44-pound, 15-ounce Chinook salmon was caught near Door County off of Wisconsin on July 19, 1994.

It very well might be a new record for the species in all of the Great Lakes. Records from Minnesota indicate a 33-pound, 4-ounce Chinook caught in Lake Superior off of St. Louis County. The Ontario Federation of Anglers and Hunters lists a Chinook salmon record of 46.38 pounds and 47 inches caught near Oakville, Ontario, in Lake Ontario.

While getting everything in order to certify a new state record, word also quickly spread in the fishing community, too. At around 2 p.m., Captain Chuck’s II was crowded with those looking to sneak a peek at the record-breaking fish. The lot filled in with cars, trucks and trailers lined the driveways and dozens eventually crowded in as Martinez, Sullivan and Keegstra brought the fish out of its box and onto a scale.

The dozens produced dozens of phones, trying to capture photos and videos of the new record.

“The fishing community is a relatively small community. I figured we would have our normal fishermen and some of the other clients maybe,” Keegstra said. “The way that word spread and the draw from the people just blew my mind.“When you think about it, it was a record that was set in the ’70s that was broken today by a 19-year-old kid. Unbelievable. Unbelievable.”

The original plan for the weekend for the Lemaster family was to come in on Friday, do some fishing on Saturday and then head home on Sunday. The whirlwind from catching what is a new state record?

“This was not part of the original plan,” Lemaster said.