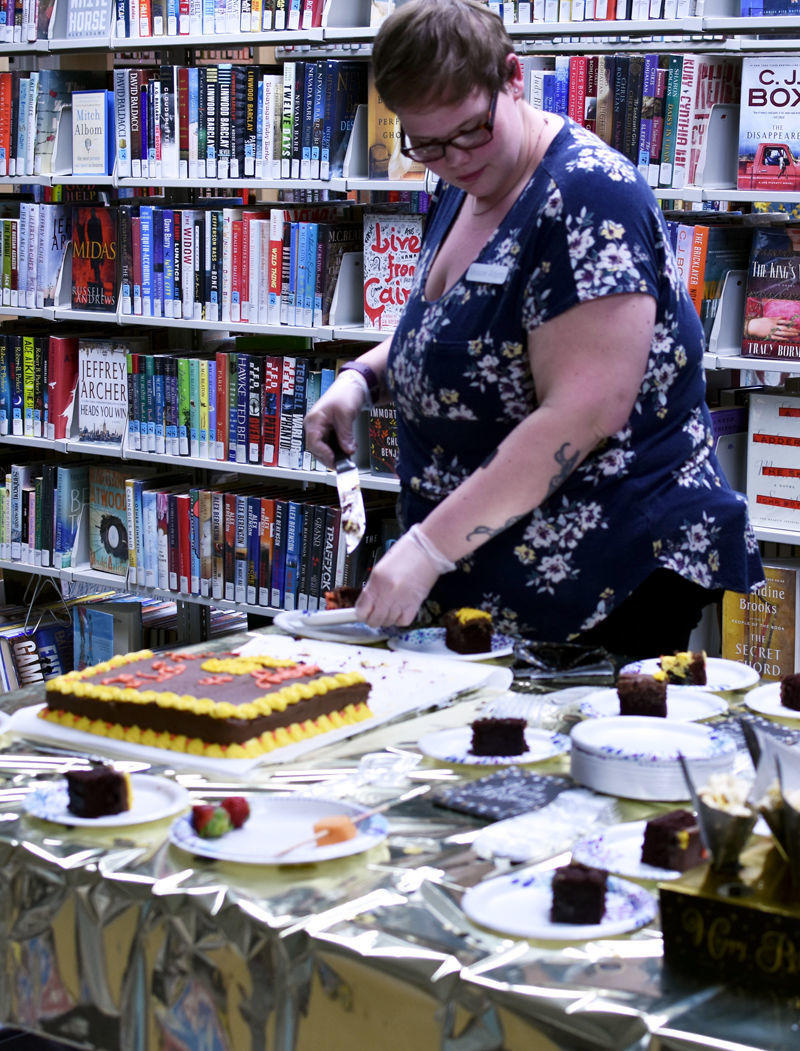 Melanie Adams, a staff member of the library, slices up birthday cake for the party attendees. 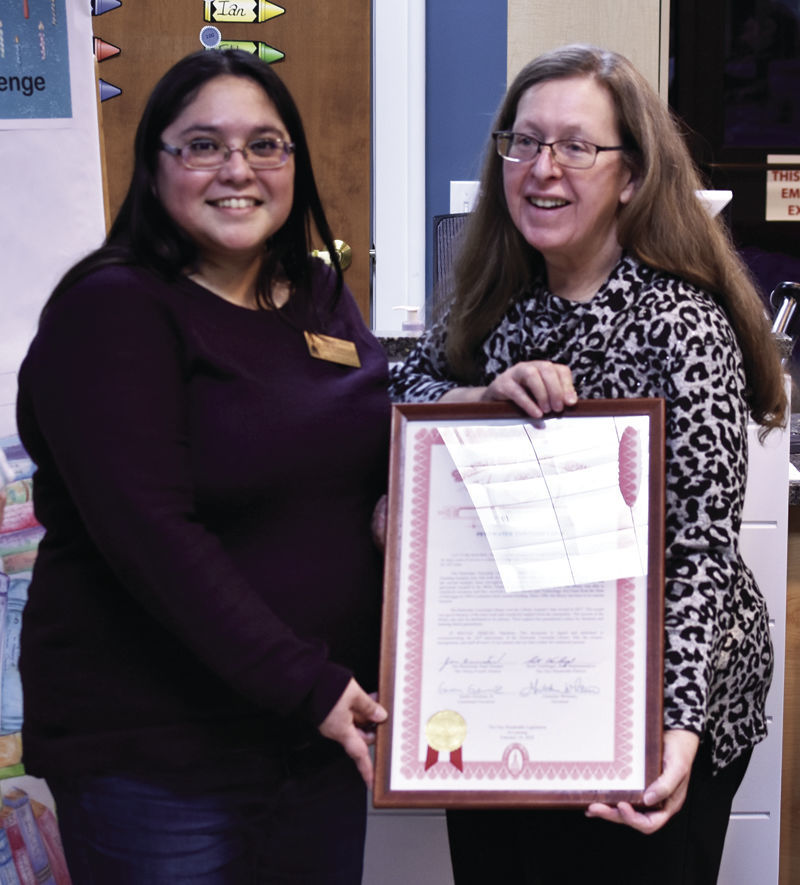 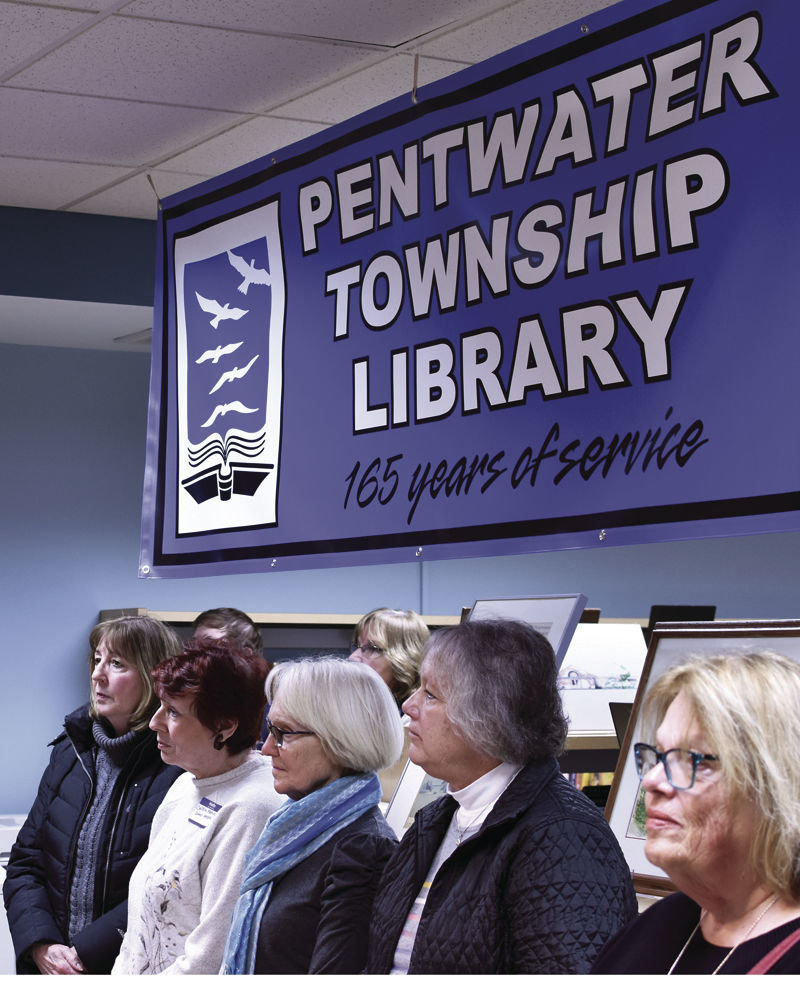 Pentwater library patrons listen as Barker thanks the town for being a reading community.

Melanie Adams, a staff member of the library, slices up birthday cake for the party attendees.

Pentwater library patrons listen as Barker thanks the town for being a reading community.

PENTWATER — The Pentwater Library celebrated its 165th birthday with an open house Feb. 12.

In a speech by Sheryl Mase, the director for the co-op the library belongs to, she said that 93.5 percent of residents have, and regularly use, library cards.

“Pentwater is small, but mighty,” she said. “Life is not necessarily on the beach, but you can still enjoy a good book there.”

A representative for 34th District State Sen. Jon Bumstead, Susie Rodriquez, presented the library with a tribute for the occasion.

The library was established in 1855 when the first $50 was donated. It was in the township office and, until the 1950s, the township clerk was given the secondary duty as librarian.

In 1928, the library burned down along with a block of the town. Though the library was to receive $300,000 in insurance money, it was lost in the stock market crash.

Though the library was not rebuilt immediately, 10 years later there are records of a purchase for 700 books to replace the ones lost in the fire.

In 1967, the library board voted to add a telephone.

The library received a grant in 1994 to build at the current location. The construction on the library was finished in 1996.

Two years ago, the building received an interior remodel. The remodel included upgrading and adding computers to “join the 21st century,” according to Elaine LeTarte, who has been a library board member for eight years.

Sarah Brosnan had come to use the computer on Wednesday and remembered the party when she saw the parking lot was full.

“I come in to use a computer at least once a week,” she said. “They have a really good selection of DVDs. The computers being up-to-date is a huge plus.”

The event, which was open to the public, was to thank patrons for supporting the library.

“It’s wonderful,” said Sam Morrison, a resident of Pentwater. “My wife and I love the library. The staff have delivered materials to our house. It’s the personal touch in a small town. Our kids and grandkids love to come here, too, in the summertime.”

As attendees streamed into the room decorated with gold starbursts, Mary Barker, the library director, asked patrons to participate in the “165th Birthday Challenge.”

The donation challenge started in October. The goal is to have 165 separate donations to the library endowment by the end of the year.

There have been 71 donations so far. People who would like to donate can mail donations, drop them off at the library, or donate online at the Community Foundation for Oceana County website, www.foceanaoundation.org, and selecting the library.

“We enjoy the library,” David Nault said. “We wanted to see the celebration and contribute a little money.”

Nault has lived in Pentwater for 16 years and especially likes the magazine selection the library offers.

A new Friends of the Library group is starting up, according to Carol Feltes.

The group’s first meeting will be at 10 a.m. on Thursday, Feb. 20 at the library. The meeting is open to the public and the group is looking for members. People interested in joining should attend the meeting on Thursday, Feltes said.

“I was amazed at the number of people who came,” said Barker. “You never know in the winter. It made me feel great that so many came.”