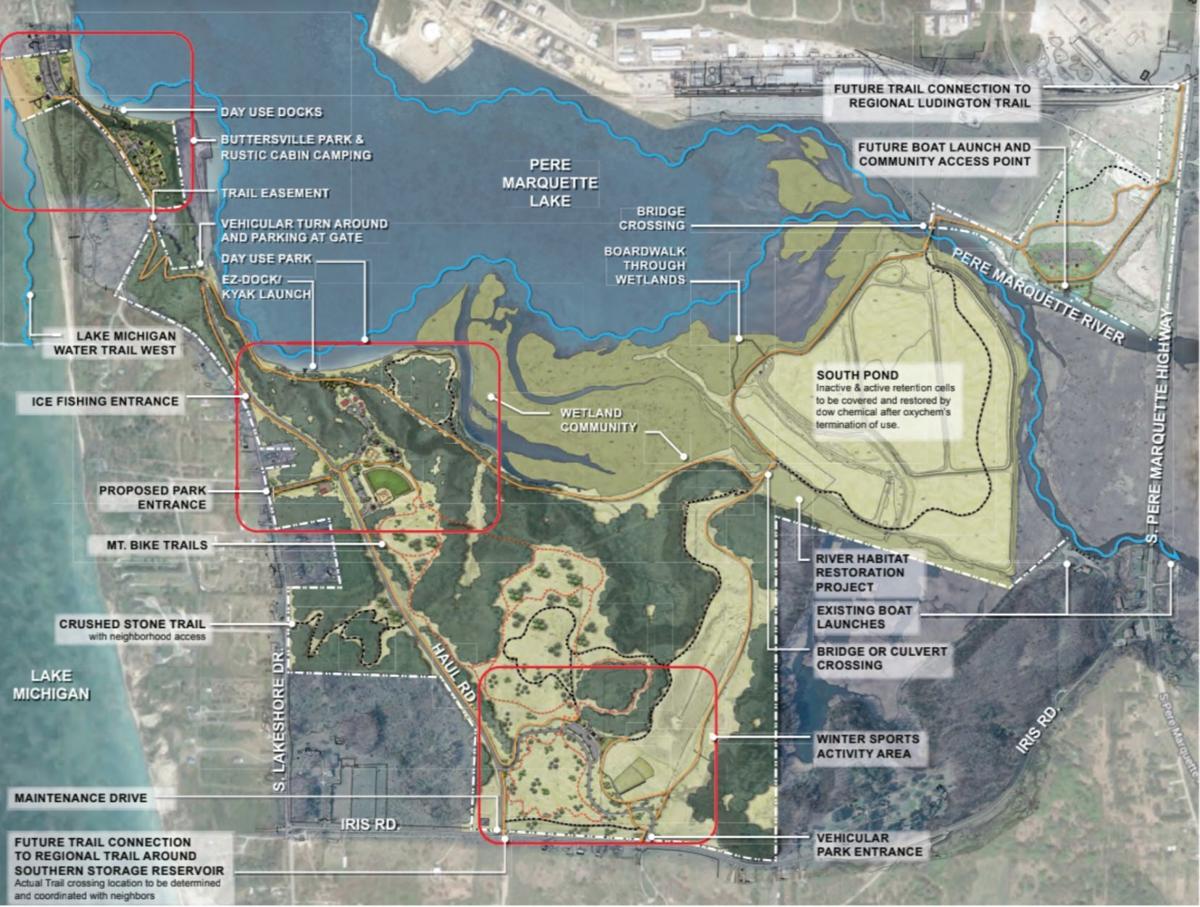 A view of the planned Pere Marquette Conservation Park from the master plan discussed on Tuesday. 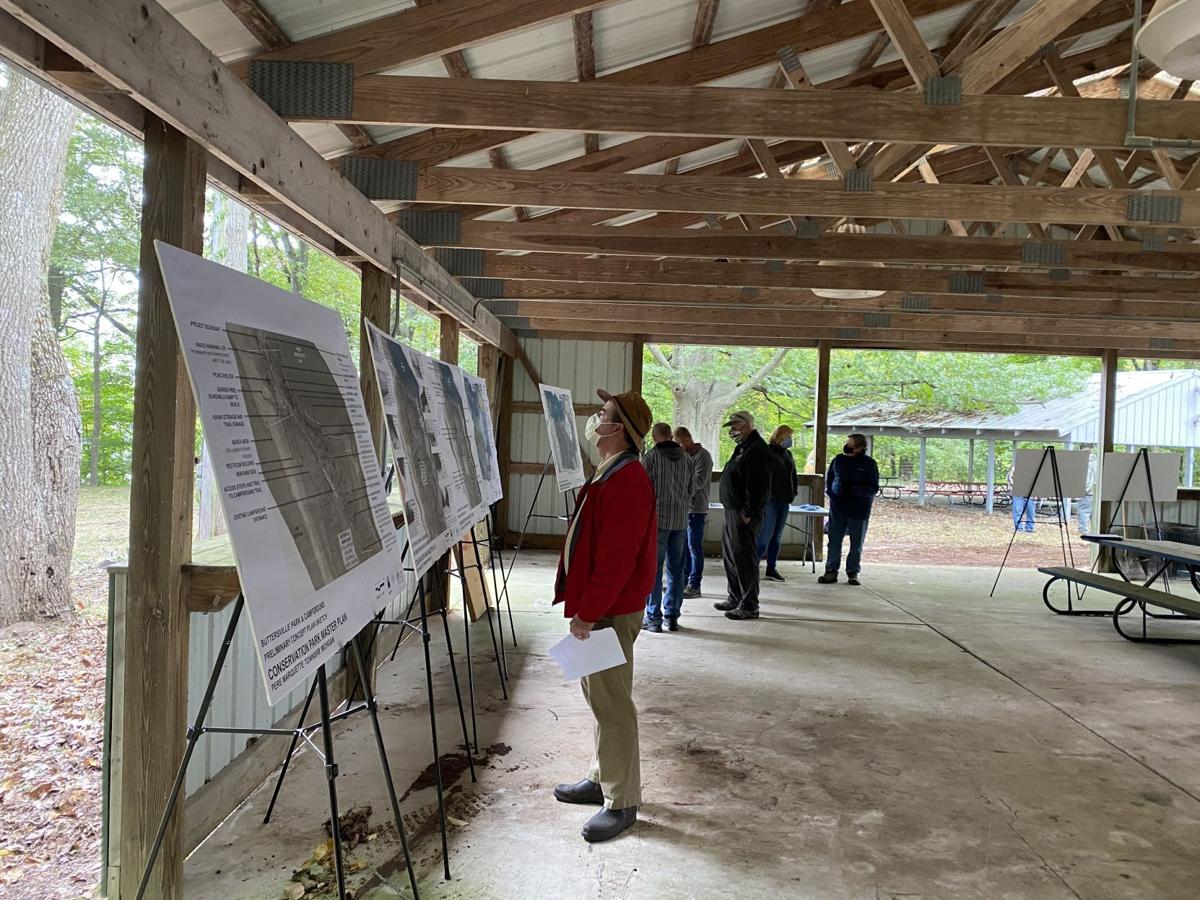 Visitors explore plans for the Pere Marquette Conservation Park during an October 2020 workshop held on the grounds of the former Dow Activities Club Park. Pere Marquette Township Parks Manager Kelly Smith update the public on the master plan for the conservation park on Tuesday.

A view of the planned Pere Marquette Conservation Park from the master plan discussed on Tuesday.

Visitors explore plans for the Pere Marquette Conservation Park during an October 2020 workshop held on the grounds of the former Dow Activities Club Park. Pere Marquette Township Parks Manager Kelly Smith update the public on the master plan for the conservation park on Tuesday.

The master plan for the Pere Marquette Conservation Park is now complete, and the total cost is expected to be more than $12 million if everything in the plan is turned into a reality.

During Tuesday’s meeting of the Pere Marquette Charter Township Board, Kelly Smith, parks manager, presented the master plan to trustees, outlining the vision for the hundreds of acres acquired by the township from Dow Chemical.

Smith said the goal is for Pere Marquette Conservation Park to become a “regional destination” for people looking to take advantage of the area’s natural splendor.

Smith talked about the history of the project and the amenities the park is set to include, such as trails, recreation areas, boat launch, a fishing and wetlands ecology observation facility, parking areas, restrooms, shelter areas, boardwalks, bike trails, a possible disc-golf course and more.

The park encompasses the former Dow Activities Club Park and other properties being acquired from Dow, with acreage east of Lakeshore Drive and north of Iris Road, connecting Sutton’s Landing and Buttersville Park with frontage on Lake Michigan, Pere Marquette Lake and Pere Marquette River.

Habitat restoration, opportunities for year-round outdoor recreation, and longterm partnerships for sustainability are also goals for the township.

Smith said the total cost was expected to be “a little over $12 million,” through the master plan is subject to change.

“Honestly, this will take years and years to develop and construction costs will vary,” Smith said on Wednesday.

During the meeting, Smith said the master plan development process has taken two years. Public input to inform the plan was sought through a pair of workshops in 2020. Additionally, a website was designed to receive public feedback about what residents would like to see at the park.

Smith said a permanent endowment fund has been started ahead of schedule through the Community Foundation for Mason County. There’s currently about $100,000 in the fund, and Smith expects that figure to grow to $300,000 by the end of 2022.

Township Supervisor Jerry Bleau encouraged board members to take a physical tour of the park, with Smith guiding the way.

Though changes may come, and no formal action was taken by the board regarding the plan, Smith said he’s exciting about moving forward.

“We know this will change as we go, but it’s a good start,” Smith said. “It’s exciting to have this and bring it forward for everyone to see.

“I’d love to see us moving forward in the next years to come.”

The planning process began in fall 2019. It was conducted in partnership with township recreation consultant JMB Associates, MCSA Group, and a natural resource team that included the Mason-Lake Conservation District and the North Country Cooperative Invasive Species Management Area. The project was supported in part by a NOAA coastal zone planning grant, which the township received through the Michigan Department of Environment, Great Lakes and Energy.

In a press release on Wednesday, Bleau said the master plan effort has been “very successful.” The release stated that “the township believes the resulting plan will be an invaluable resource that will guide its Pere Marquette Conservation Park development and management efforts.”

The full master plan is available on the township’s website at www.pmtwp.com.

The board entertained a request from Heirloom Carpentry and Construction for a building permit reduction fee for the planned Oak Leaf Self Storage facility at 110 S. Jackson Road. In a letter to the board, Josh Wickham of Heirloom stated that the original estimate provided for the permit, $6,700, did not match the final amount of $9,837.

The estimate was given based on the records for Maple Leaf Self Storage, which owned by the same company. There were also discrepancies in the number of feet of road frontage, which was listed as 250 initially, and ended up being 217.

In the letter, Wickham asked that the township decrease the permit amount to match the original estimate.

“What it boils down to is, in the permit for the current project, there is a difference of 3,137.86,” Bleau said. “He is asking us to waive a portion of that.”

A motion was made to approve the request so it could be discussed, and during the discussion, Township Clerk Rachelle Enbody said, stated that the township was not bound to the estimate.

“We have made changes to the building and zoning fee schedule twice. Someone called and asked for an estimate, and it is exactly that, an estimate. And we are in no way bound (to that),” Embody said. “My recommendation would be to deny. The fee is the fee, and it’s calculated per our schedule. Also any contractor has access to our fee schedule through our website, and they can calculate that themselves.”

“I wouldn’t support a reduction. From a supervisor’s position… It doesn’t feel right to me,” Bleau said.

Other trustees stated that they had concerns about setting a precedent for future contractors.

The initial motion to grant the reduction was voted down, and a second motion to deny the request was approved, with Henry Rasmussen and Jim Nordlund Sr. voted against it.

The township board also approved several road projects for the 2021 road budget. Projects included Lakeshore Drive from the end of Iris Road to Buttersville Park; Riverside Lane from Hillside Drive east to the end of the drive; Bradshaw Road from Lakeshore Drive to Inman Road; John Street from Jebavy Drive to Emily Kay Court; as well as dust control.

Additionally, Jennifer Richert was appointed the Board of Review. Richert was unanimously approved by trustees to serve out the remainder of Marsha Gould’s term, ending in 2023, with James Hinman as the alternate.

The board also approved a bid for Lot 4 in the township’s First Street Business Park from Foamworks LLC. The asking price for the lot was $26,375, but the board unanimously accepted the bid for $25,000.

Bleau also noted that the township is expected to receive about $240,000 in stimulus funds. At the next meeting, the board will discuss how those funds could might be used.