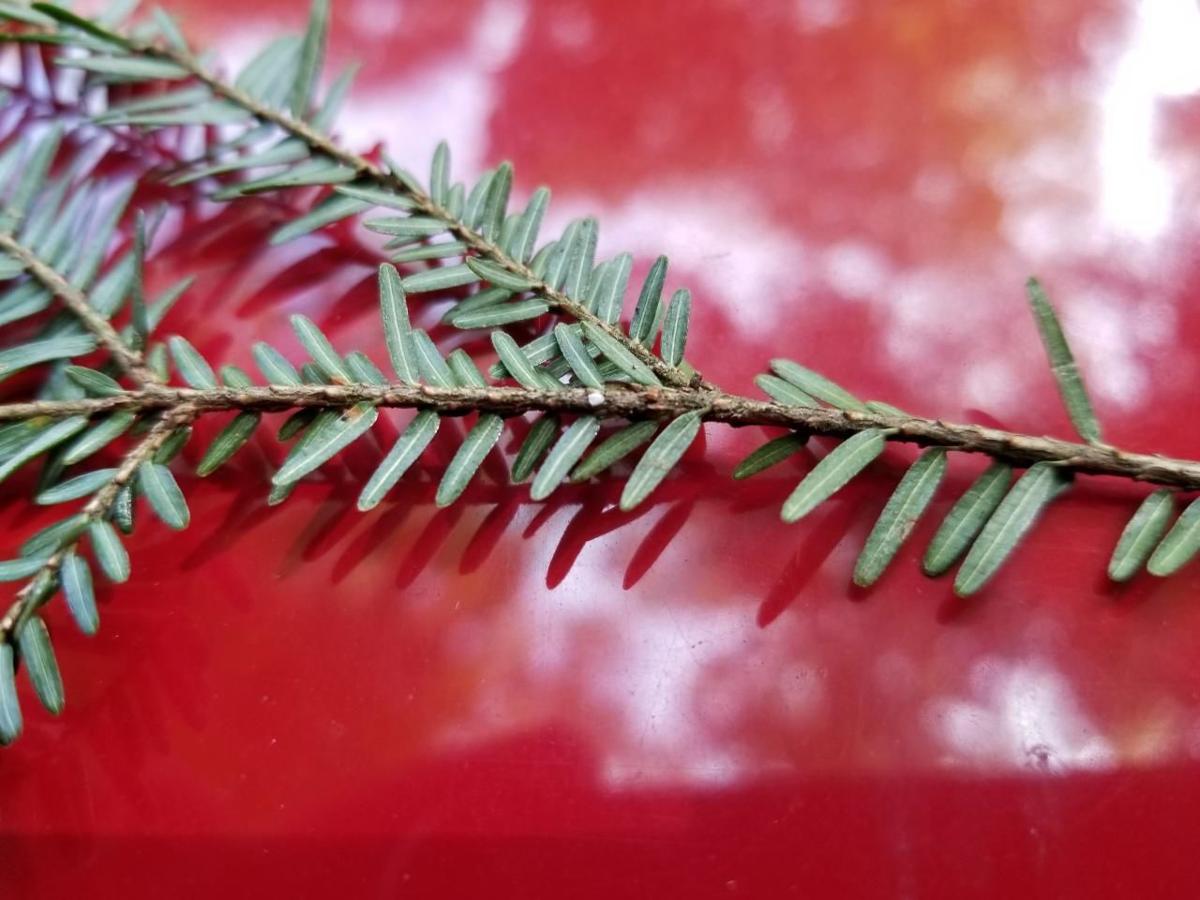 Five trees at Ludington State Park have been infected by the invasive hemlock woolly adelgid. Efforts are underway to scour roughly 906 acres of state park land that could be susceptible to infestation.

The invasive species hemlock woolly adelgid has been found at Ludington State Park, and a search is now underway to find and treat any other infected trees.

Five trees at Ludington State Park have been infected by the invasive hemlock woolly adelgid. Efforts are underway to scour roughly 906 acres of state park land that could be susceptible to infestation.

The invasive species hemlock woolly adelgid has been found at Ludington State Park, and a search is now underway to find and treat any other infected trees.

Efforts are underway to survey 906 hemlock-dense acres at Ludington State Park following the discovery of hemlock woolly adelgid, and with the prevention of further infection a top priority, state park and DNR officials say now is the best time for the public to keep an eye out for the invasive species.

The insects are easiest to spot during the winter, before the small, white, ovisacs — which look like cotton balls stuck to the underside of hemlock branches — hatch.

The insects have been identified on five trees at the state park, and those trees have been treated by members of the Michigan Civilian Conservation Corps. Now, that seven-person crew is taking on the daunting task of surveying the rest of the park’s trees.

“They treated it and intensified their surveying efforts in the area,” Gallie told the Daily News. “It’s something people need to be aware of (because) they can have a devastating effect.”

Gallie said infected trees have been found along the park’s island, canoe and logging trails, and they’ve been treated with prophylactic chemicals to make sure the insects don’t reproduce.

Heidi Frei, forest health specialist with the DNR Parks and Recreation Division who directs the crew members, said the hemlock woolly adelgid was first detected in Michigan in 2017. It’s believed to have entered the state through the nursery industry, hitching a ride on trees being brought in from outside the state. It can be spread from tree to tree by birds, deer, wind gusts and even human beings.

According to Frei, Ludington State Park has been a high priority for her team since the species was first detected in the state, but there was no sign of it at the park until October. She said it’s remarkable that the insects were spotted at the park in such low numbers, and she commended the crew members for the discovery.

Frei said it’s important for the public to know that the invasive species is in the area.

Though the density of the species in the infected trees is currently quite low, Frei said it could quickly become a much bigger problem due to the rapid reproduction rate of the insects.

“It’s definitely something people should be aware of and should be looking for,” she said. “The more eyes out there, the better. If folks have hemlock trees on their property and they’re able to check their trees, or if they’re hiking… we really need folks to stop and take a look.”

One useful resource is the Michigan Invasive Species Information Network (MISIN), which is run by Michigan State University and funded by the state. Frei said people can download the MISIN smartphone application to report possible sightings of HWA, or to compare a speck of white they see on a hemlock tree to photos of HWA to help people confirm that they’re seeing the insects.

Frei also recommended reaching out to the Mason-Lake Conservation District, which is “ramping up” its HWA treatment and inspection efforts this year, according to Executive Director Dani McGarry.

The conservation district works directly with homeowners to help deal with hemlock woolly adelgid infections. This year, it’s using more resources than before.

“We’re basically doubling the amount of staff and time we’re spending on the survey and treatment… of private lands,” McGarry said. “We’re trying to focus our survey efforts within 5 miles of the lakeshore, but we can visit anyone who thinks they have an issue or wants us to take a look at their hemlock trees.”

The state park isn’t the only area that’s been affected.

“Summit Township has some property that’s near Bass Lake, and last winter, there were a couple of infected trees found there. And I just learned that there are additional trees in that general area that have since become infested,” McGarry said.

The Mason-Lake Conservation District has a grant from the DNR to survey and inspect private properties for HWA, and it’s also working with the West Michigan Cooperative Invasive Species Management Area (CISMA) to bolster its efforts to prevent the species from moving farther north.

McGarry recommended that homeowners keep an eye on their trees, and keep a lookout for those white spots on the underside of the branches.

Frei said surveying work will continue at the state park throughout the winter.

In addition to the chemical treatments and the surveying, Gallie said state park employees have been trimming back hemlock trees to make sure the insects are not passed on to other areas by passing RVs brushing against the trees and carrying the adelgids off to other locations.

Both Frei and Gallie said hemlock trees are a vital part of the ecosystem in the area, and people can help to preserve the trees by keeping an eye out for HWA.

“Hemlock in Michigan is not very widespread, but it has a really important ecological role, especially with the dunes,” Frei said. “Some of the dunes have faces that are full hemlock, and hemlocks hold those dunes in place. They’re beautiful to look at, and they play a big role in tourism.”

Gallie noted that hemlocks provide cover during the winter, keep the ground warm, are excellent for birds and have a cooling effect on streams, too.

“It’s definitely a very valuable tree to our ecosystem,” he said.

Gallie said it’s likely that more infected trees will be found at the state park during the survey phase.

“It’s not something we wanted, but… we expected it could come to the area, because of birds using the shoreline as part of their migration route,” Gallie said. “There’s a good chance we’ll find more as the season progresses.”

To inquire about having the Mason-Lake Conservation District check out a property for hemlock woolly adelgid, call (231) 757-3707.

McGarry said there will also be a mail campaign in December, during which letters will be sent out to property owners located near infestation sites. A permission letter needs to be signed allowing district personnel to visit private land.

The service is free.

McGarry also recommended visiting www.saveMIhemlock.org for more information about the species and efforts to prevent it from moving farther north.