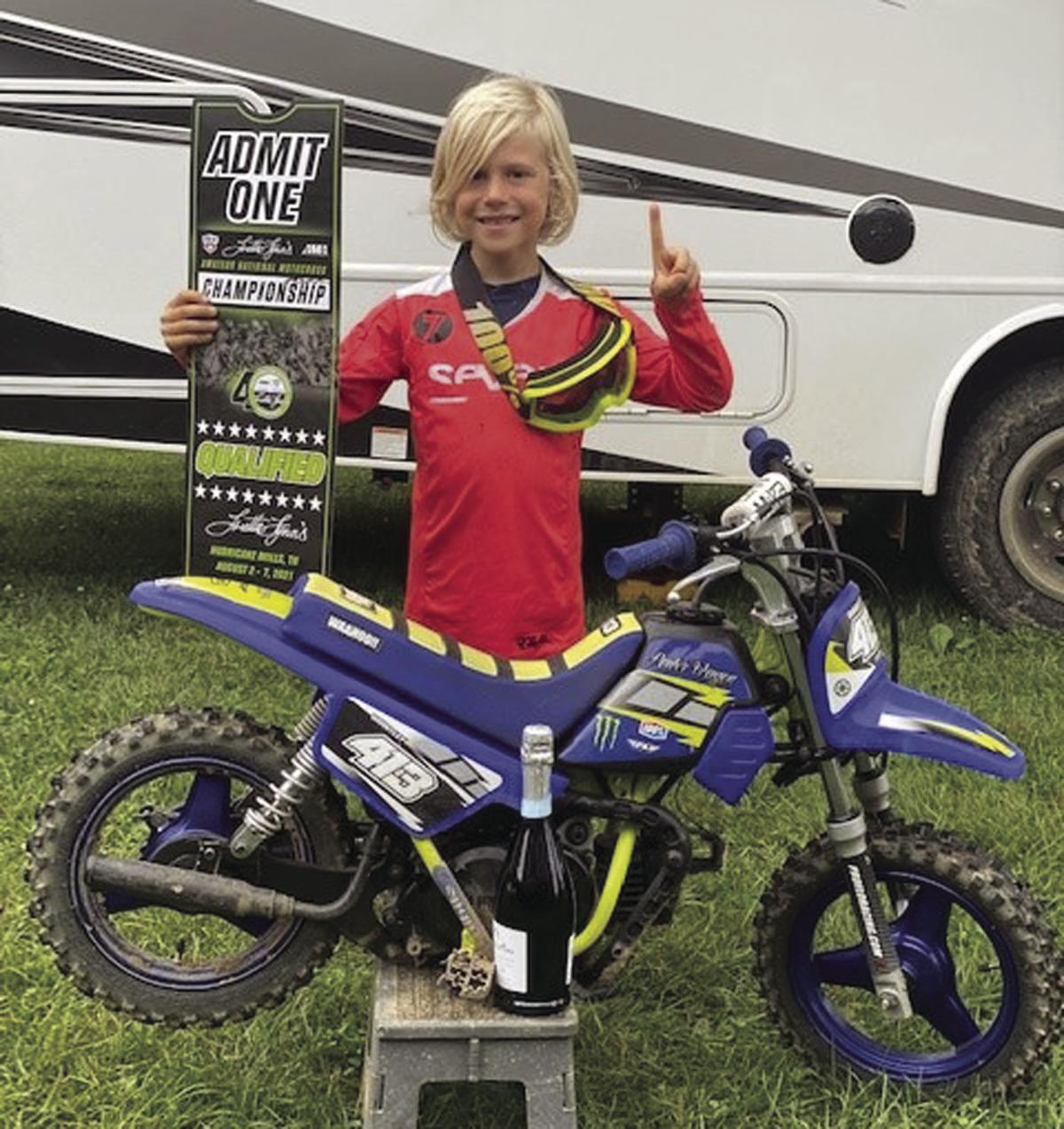 Brantley Sheren jumps over a mound during a race.

Brantley Sheren jumps over a mound during a race.

Brantley Sheren took a liking to motocross from the moment he get on his first dirt bike.

Six-year-old Brantley of Ludington, who rides in the 4- to 6 year-old motocross 50cc shaft drive class, recently qualified for the Monster Energy Amateur Motocross National Championship at Loretta Lynn’s. The event is held once a year at Lynn’s ranch in Hurricane Mills, Tennessee.

Brantley is one of 42 riders of more than 630 who attended area qualifiers during the season. They each qualified for the nationals to be run the week of Aug. 1 thru the 7.

Brantley, who rides a Yamaha PW50cc bike, said he likes to go fast and likes the jumps.

“Listening to my dad, Adam, has helped me get better,” he said.

Adam and Ashley Sheren bought a couple of dirt bikes and a boat in 2020 to help get the family spending quality time outside during the pandemic.

“We spent a lot of time fishing in the beginning,” Adam said. “We didn’t begin riding until August.”

Adam said the family did not go to its first race until August, and Brantley started out racing in Wobbler class.

“That class is for riders who have never raced or only have raced a couple of times,” Adam said. “They literally just wobble around the track.”

Brantley, in his first race, took 19th place out of 24 riders, but by his third race he won. Adam and Ashley moved Brantley up to the trail class, which is known as District 14 for the local race series that Brantley is currently racing in.

In 2020, Brantley raced through October, he then did not touch a bike for five months until March 2021, according to Adam.

Brantley started off 2021 by attending a training at the SSR Training facility in Indiana. The training was held on a Monday, Tuesday, Wednesday and Thursday, and on that Saturday Brantley began his District 14 racing season and has raced every weekend since.

“We have raced every weekend since the last weekend in March,” Adam said. “We have had only two weekends off, one for a wedding and the other the Fourth of July.”

Adam, who also rode dirt bikes from ages 6 to 13, said his son is flourishing in the sport and has the potential to be really good at it.

“This is something that I always really liked but we did this to start getting outside,” Adam said. “Riding dirt bikes taught me a lot about taking care of things and being responsible. I thought this would be really great for the kids.

“There is something to be said about motocross. It really gets into you. You pull up and there is 1,500 people camping, you smell the race fuel, you are sitting at a regional and there are 39 riders on the gate, who are all shooting for that first corner, I think that builds a little character. This sport builds a lot of grit. You have to be tough. It is a tough sport.”

Adam said when he and Ashley found out Brantley qualified for the national on two different motorcycles — the shaft drive and the electric bike — they decided to ask Brantley if he could choose one bike to ride next year which one would it be?

Adam said riders who qualify for the nationals can qualify on multiple bikes but can only ride one in competition.

They did not tell Brantley why he was choosing which bike but they figured which ever one he chose, that would be the bike they would choose to ride at the national competition.

“Brantley said I think I would want to race my PW50cc because that was my first bike,” Adam said and that is how the decision was made.

With Brantley qualifying for national this year, Adam said he had to rearrange his schedule quite a bit because he was making plans not ever thinking their son would qualify.

“We do not register for the national championship until Sunday, Aug. 1,” Adam said. “But they say in order to get a good parking spot you need to get there by Wednesday, July 28. Brantley does not race until Wednesday, Thursday and Friday, Aug 4 throgh 6.”

Adam said things changed because Brantley did so well in his riding season this year.