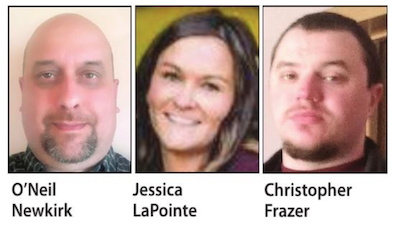 SCOTTVILLE — Three candidates with eyes on Scottville’s city manager seat were interviewed Thursday during a special meeting of the city commission at the Optimist Hall.

Aiming for the position previously held by Courtney Magaluk, the candidates — O’Neil Newkirk, Jessica LaPointe and Christopher Frazer — were asked a series of questions by Mayor Marcy Spencer and Mayor Pro-Tem Rob Alway. Points of discussion included the candidates’ reasons for seeking the position, what they’d bring to the city if hired, and what issues they’d address first.

Though none of the candidates has past experience as a city manager, they each spoke about experience in their respective fields which they believed would be an asset to the city.

The meeting was for the purposes of conducting interviews only. No decisions will be made regarding the position itself until Monday’s regular meeting of the city commission at the earliest, according to Spencer.

Newkirk, a DNR parks and recreation officer from Oscoda, emphasized his experience in the park system, working in various parks in various small towns similar to Scottville.

“I’ve seen a lot of small towns in his time working as a parks officer,” Newkirk said. “I feel… this is a good opportunity for me to bring my skills from working in government for the past 25 years to (to Scottville).”

The city manager position would offer a chance for Newkirk to return to and serve the city he used to call home, he said.

“I grew up here, and I recognize that the way Scottville was 25 years ago isn’t how it will be in the future,” Newkirk said, though he noted that he does see potential for growth in various areas.

He stressed the importance of utilizing vacant properties, make housing more available to prospective newcomers and bringing new businesses and activities to the downtown area.

Newkirk said that, if hired, he’d hit the ground running by applying for grants to help revitalize the city.

“There’s DNR grants and monies available,” he said. “You just have to look for it… Give people something to do. Reach out. Let people know that Scottville’s ready, and we’re willing to work with whoever’s going to take a chance with us.”

Newkirk said if selected, he’d be able to start in two weeks’ time.

LaPointe, of Branch, is currently a finance and human resources manager for the Lake County Road Commission. She said she was drawn to the position by the opportunity to help a community thrive.

“I just feel it’s an amazing opportunity,” she said.

When asked about relevant experience, she highlighted a handful of duties she currently oversees that could be applicable at the city government level as well.

“I’ve worked at the Lake County Road Commission for eight years,” she said. “In my current position, I do budgeting, handle onboarding of employees, accounts payable, accounts receivable, customer service (and more).”

If hired, the first three months of her tenure would be spent procuring knowledge about the position from reliable sources.

“There’s going to be a lot of learning going on. I don’t know all the facets of a city… (but) I plan on being very involved in the community, joining as many meetings as possible, attending some City of Ludington meetings and maybe getting some advice from their city manager,” LaPointe said.

She said she’d try to learn what is needed in order for the City of Scottville to “flourish.”

Like Newkirk, she said she doesn’t believe Scottville will ever be “what it was,” but she said she’d relish the opportunity to bring back some of its past splendor.

Industry, she said, is the most pressing concern for Scottville. She said she’d like to see more community engagement and festivals in the city.

She said the most crucial qualities for a city manager are communication, transparency, the ability to ask for help and guidance, and for everyone to be on the same page.

LaPointe said she’d be able to start May 1.

Frazer, of Cass City, is completing a master’s degree in public administration at Central Michigan University. He said he’s eager to use some of the skills gained during the course of his education, and he sees the city manager position as a chance for him to do just that.

“I see it as an opportunity to take some of those lessons I learned from school, from internships, and apply it here,” Frazer said. “I feel like I’d be a great fit (for the position).”

He cited an internship with the City of Vassar as a career highlight.

If selected for the position, Frazer said he’d use the first three months to gauge what residents and officials felt were pressing issues for the city.

“I’d have a meeting with community members and stakeholders and ask them what they’d want to see here…,” he said. “I’d work on collaborating with (other municipalities). I’d also look into looking into creating grant proposals to the State of Michigan, so we could bring more money in to fund new projects.”

He listed communication, compassion and empathy as the most crucial qualities for a leader.

Frazer has some past zoning experienced earned during his internship with the City of Vassar, which he felt would be of use. He said he does not have direct budgetary experience, but he understands what’s needed to put a budget together.

Frazer sees the development of Scottville’s downtown area as the most pressing issue facing the city. He believes the downtown district could be the city’s “crown jewel.”

“I’d work with the Downtown Development Authority to work on bringing in more tourists,” Frazer said.

He said he’d like to bring more transparency to the city’s budget. He’d also like to expand the city’s social media presence to create greater community engagement.

He emphasized that he’s part of the International City/County Management Association, as well as the Michigan Municipal Executives; he said that meant the job was “strictly professional” and “apolitical,” and that he would not take political stances.

Frazer said he’d seek out entrepreneurial opportunities for the city, and attempt to bring tourists to the community.

“What I want to bring to Scottville is the hard work, the dedication, the sacrifice I’ve applied to past positions,” he said.

If hired, Frazer said he could start by May 3 at the earliest, though he would prefer to start on May 10, to afford him time to find stable housing.

Spencer said she expects the city commission will enter into closed session on Monday to discuss the interview. That session will either result in the extension of a contract to one of the candidates, or, if a candidate isn’t selected, the search will start again.

The city manager search is being conducted by Arch Staffing and Consulting of Ludington.