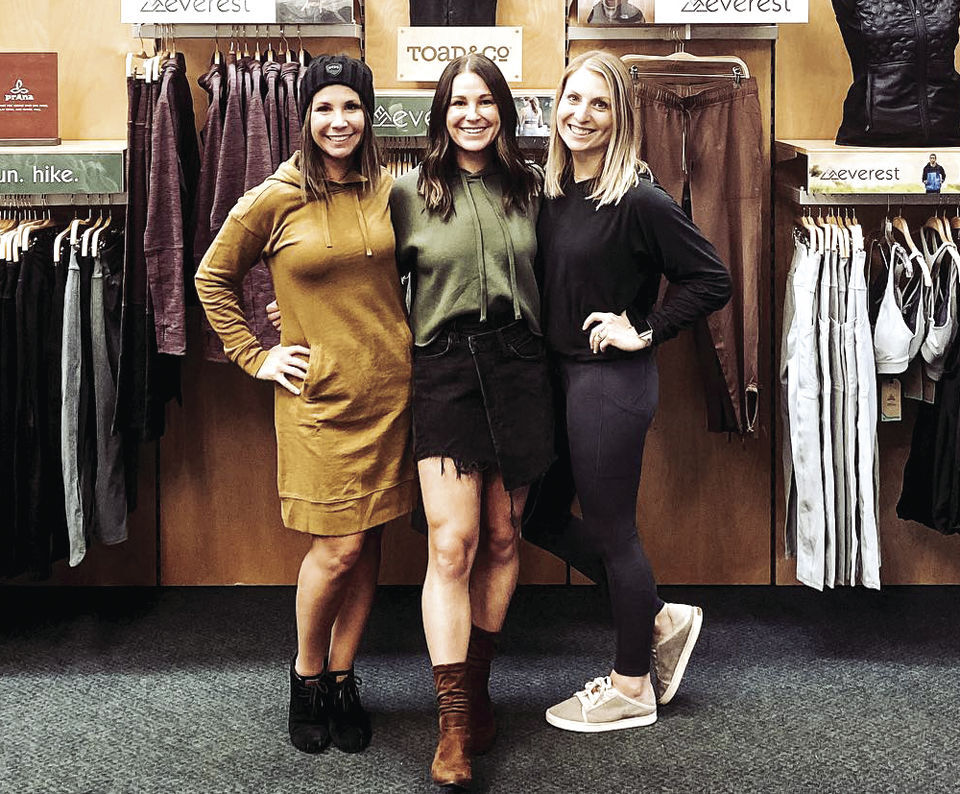 Sisters Carin Greiner, Larissa Vanderputte and Macyla Greiner are the owners of Everest Athleisure, a new store on Ludington Avenue. They also opened a store in Pentwater. 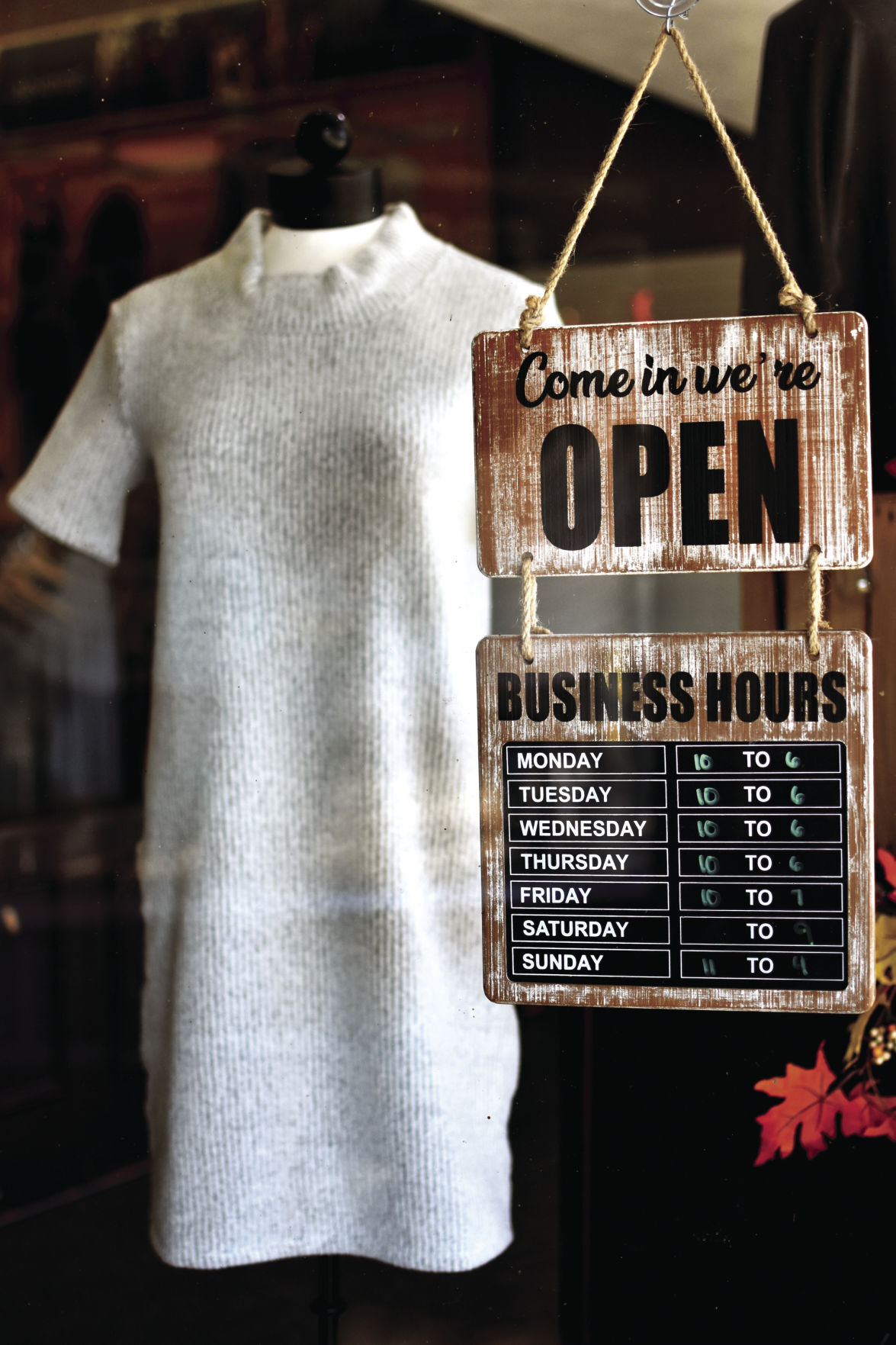 Everest Athleisure on Ludington Avenue, formerly 108 Threads, is expected to be open year round.

Sisters Carin Greiner, Larissa Vanderputte and Macyla Greiner are the owners of Everest Athleisure, a new store on Ludington Avenue. They also opened a store in Pentwater.

Everest Athleisure on Ludington Avenue, formerly 108 Threads, is expected to be open year round.

Everest Athleisure is the new business on the block, though not entirely unfamiliar.

The store located at 103 E. Ludington Ave. was previously 108 Threads, which featured “rugged and stylish active wear” in Ludington for about 15 years. There was also a 108 Threads in Pentwater.

The new store will sell “athleisure” — athletic and leisure-wear — clothing suited for activities and lounging, as well as and active wear.

It started out as a search for an activity the sisters could do together and bloomed into a partnership with a common goal.

“It was a joint thing between all of us. At first we looking for — it sounds crazy — a hobby based on what we all enjoy doing,” Carin said. “We were talking about some real estate sites and came across this. We actually know (the 108 Threads owners) so it was ironic that it played out the way it did.”

They’ve been active their whole lives, from high-school sports and hunting to hiking and kayaking.

“All three of us have been very active and involved in sports growing up. We have a passion for that and just healthy living,” Carin said. “We’re trying to bring some of that vibe and feel back to the hometowns with our favorite brands that we enjoy and use on a daily basis.”

They come from a family of farmers in Crystal Valley.

“We grew up here, so we decided to keep both (former 108 Threads) locations open,” Larissa said.

All three graduated from and played sports for Hart Public Schools. They also danced at Letha Fulton School of Dance in Ludington.

When the virus hit, they had to take a step back from looking for a place to set up shop.

“It was early March, before the pandemic, and we had to pull the reins back a little bit, so we didn’t end up taking ownership until Sept. 8,” Larissa said.

They each contribute expertise to the business. Carin left her job to manage the stores and has a background in marketing. Larissa, an accountant, will do the bookkeeping. She also teaches group fitness classes in New Era. Macyla is a physical therapist and will handle the social media.

“Business-wise we have a great dynamic,” Larissa said.

“We are very close,” Carin said. “It started as looking for a hobby and turned into an actual business venture.”

They hosted open houses for both locations at the end of September, but the stores were open beforehand and sold remaining 108 Threads inventory.

“(The open houses) went really well. We had live music, which we want to have again,” Carin said.

“We had a good turnout, which was encouraging with the pandemic and everything.” Larissa said. “People still want to shop local.”

Carin said they were grateful to the former owners for helping them get on their feet.

Now the stores are filled with the sisters’ favorite active and leisure brands — North Face, Helly Hansen, prAna — plus accessories and some Michigan-made products like candles.

“You’ll see a lot of your athleisure, your comfy weekend wear, but also outfits that you can pair with jeans and still go out and do something that evening,” Carin said.

They intend to keep some of the brands people gravitated to at 108 Threads.

“Our dad loves Tommy Bahama,” Carin said. “We are still going to have a lot of the brands that (108 Threads) had, just switching gears and adding more of our vision.”

Their vision is to bring more outdoor and active wear to the area.

“Right now you have to travel to find (these brands),” Carin said.

“We want to promote healthy living,” Larissa said. “The Midwest is so pretty, we want to encourage people to get out and explore.”

They chose the name Everest Athleisure because they wanted to embrace the active lifestyle, Carin said.

“When people think of (Mount) Everest, they think of outdoors and hiking,” she said.

Though the pandemic put a damper on their initial planning, Corin said it has put twist on vacationing for people in the community.

“People are doing more things locally and enjoying what they have available close by instead of going to the mall or shopping online. People still want to touch and feel and try something on,” she said.

An online store that offers in-store pick up and shipping is in the works. They also want to do special events.

“On Monday, a young girl reached out to have her 15th birthday here. It was a private event after hours. Her friends came in and did a game where they pieced together their favorite outfit and did a mini fashion show. The winner got a discount on their purchase,” Larissa said.

“They had a blast,” Carin said.

The next event is a fashion show at Golden Sands Golf & Bucket Bar in Silver Lake on Oct. 16. Reservations are not required. People can visit the Everest Athleisure Facebook page for more information.

The Ludington store is expected to stay open year-round, possibly with reduced hours in the winter. The Pentwater store, at 165 S. Hancock St., will close sometime after the fall until next season.

They said the most surprising part of being business owners has been how their friends, family and the community has supported them.

“We’re excited to a part of the avenue,” Larissa said, with Carin adding that they hope “to offer some new, unique items that will benefit people’s lives.”