You are the owner of this article.
Edit Article Add New Article
You have permission to edit this article.
Edit
Welcome, Guest
Home
COVID-19
News
Sports
Obits
Opinion
Living
Multimedia
Classifieds
+ More
1 of 5 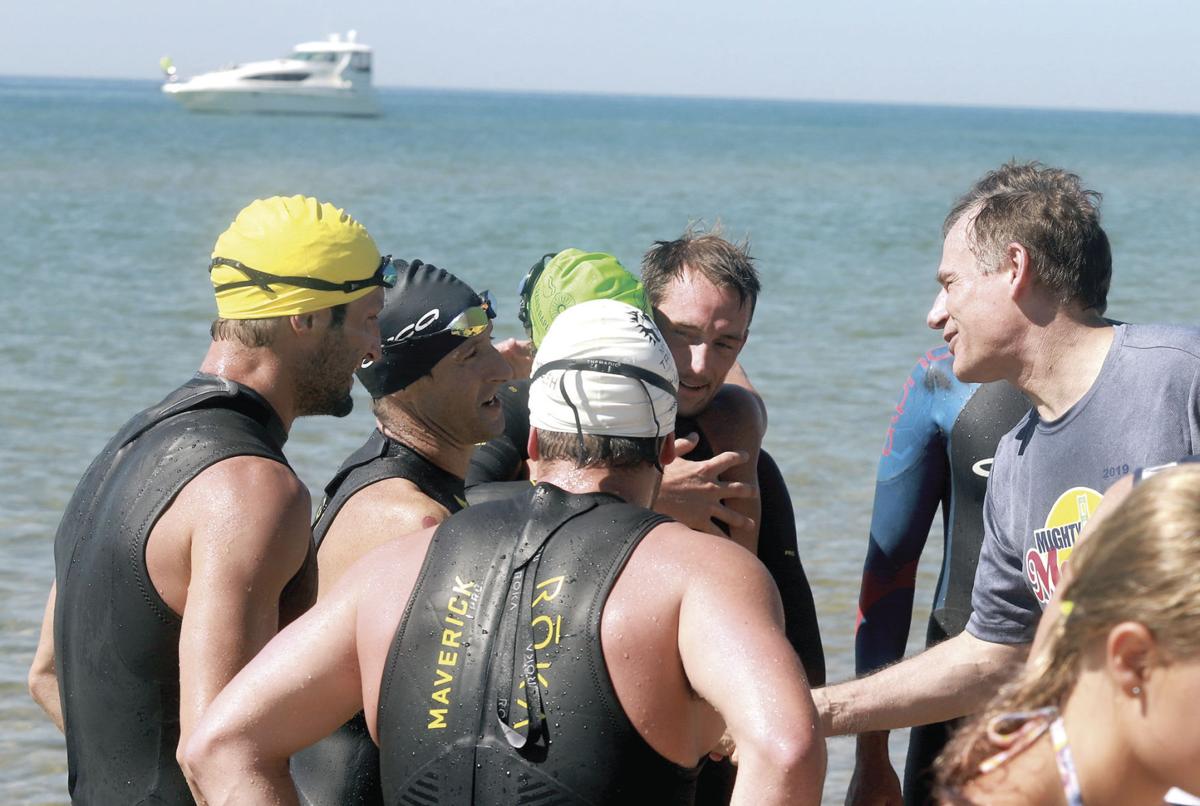 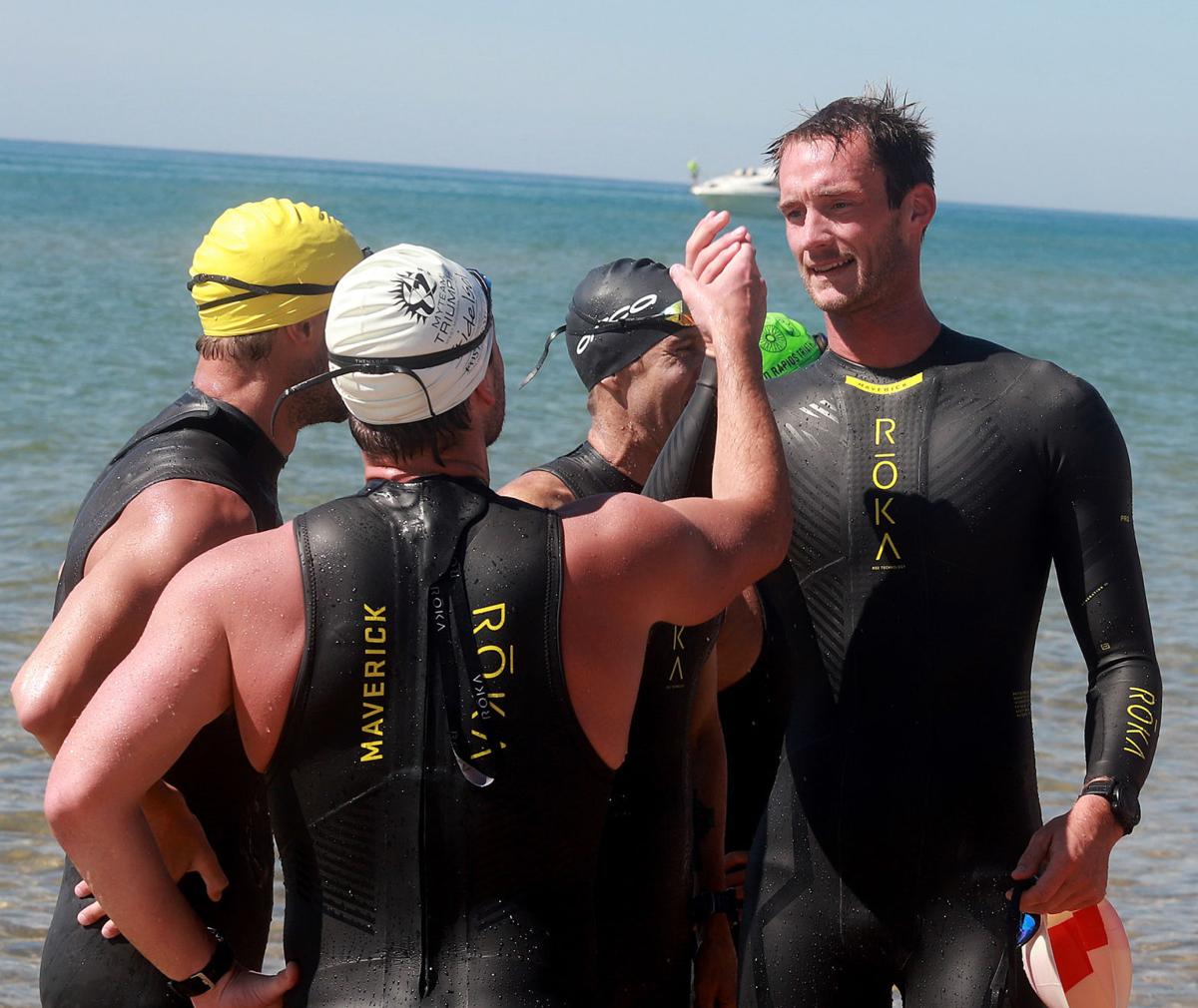 Members of team EpicSwim congratulate one another on the shore of Lake Michigan in Ludington State Park just north of Big Sable Point Lighthouse. 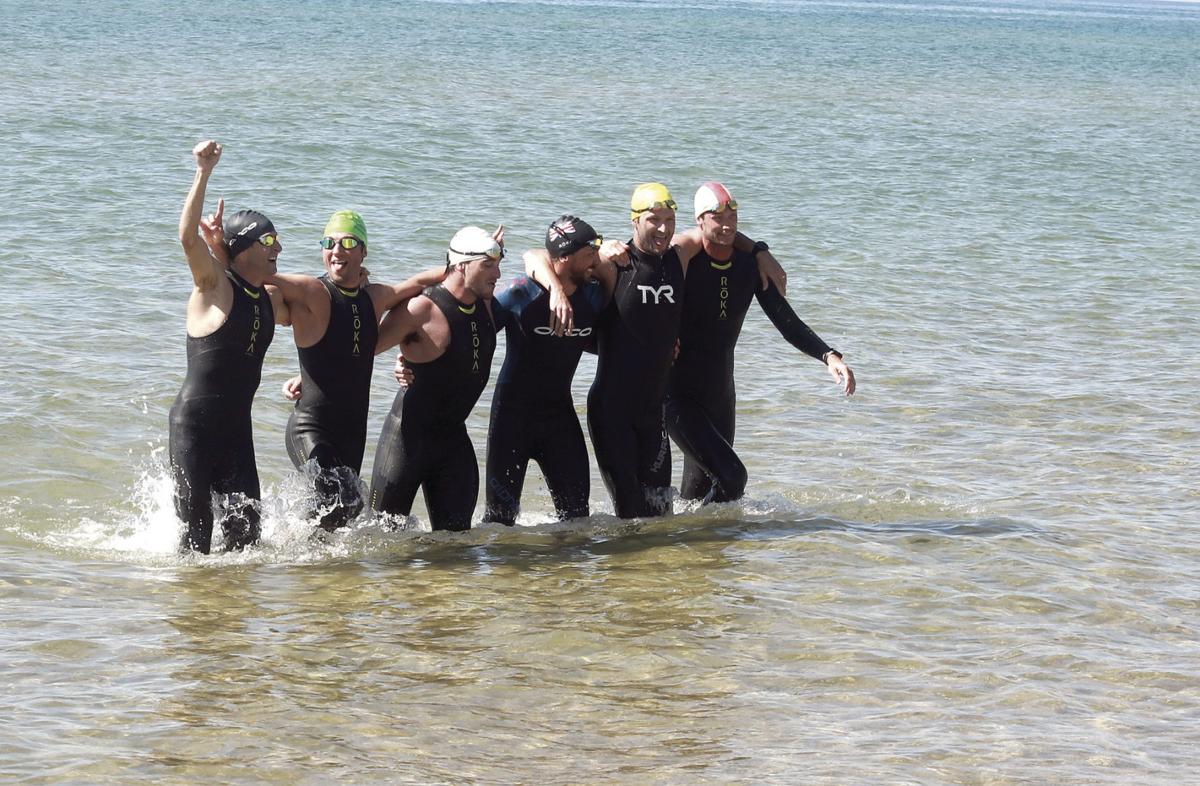 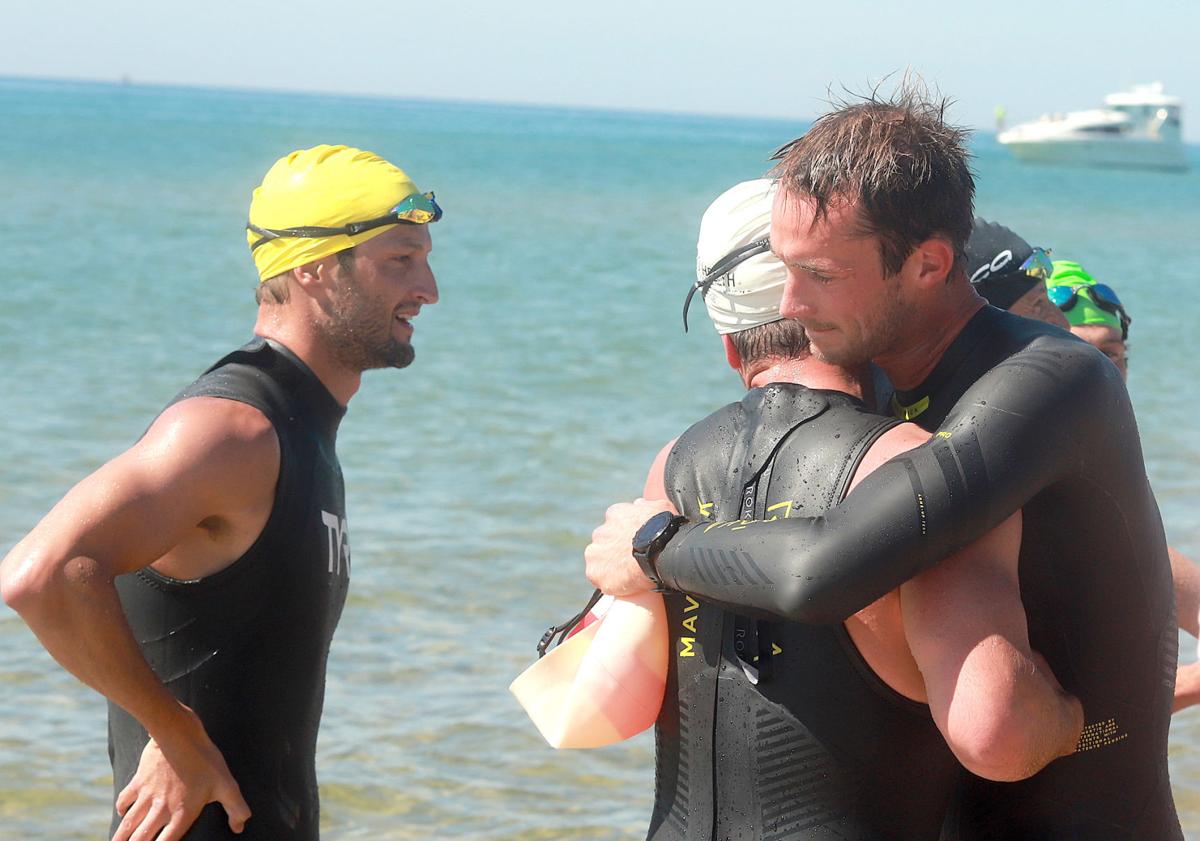 Members of team EpicSwim congratulate one another after completing the 60-mile swim Wednesday. 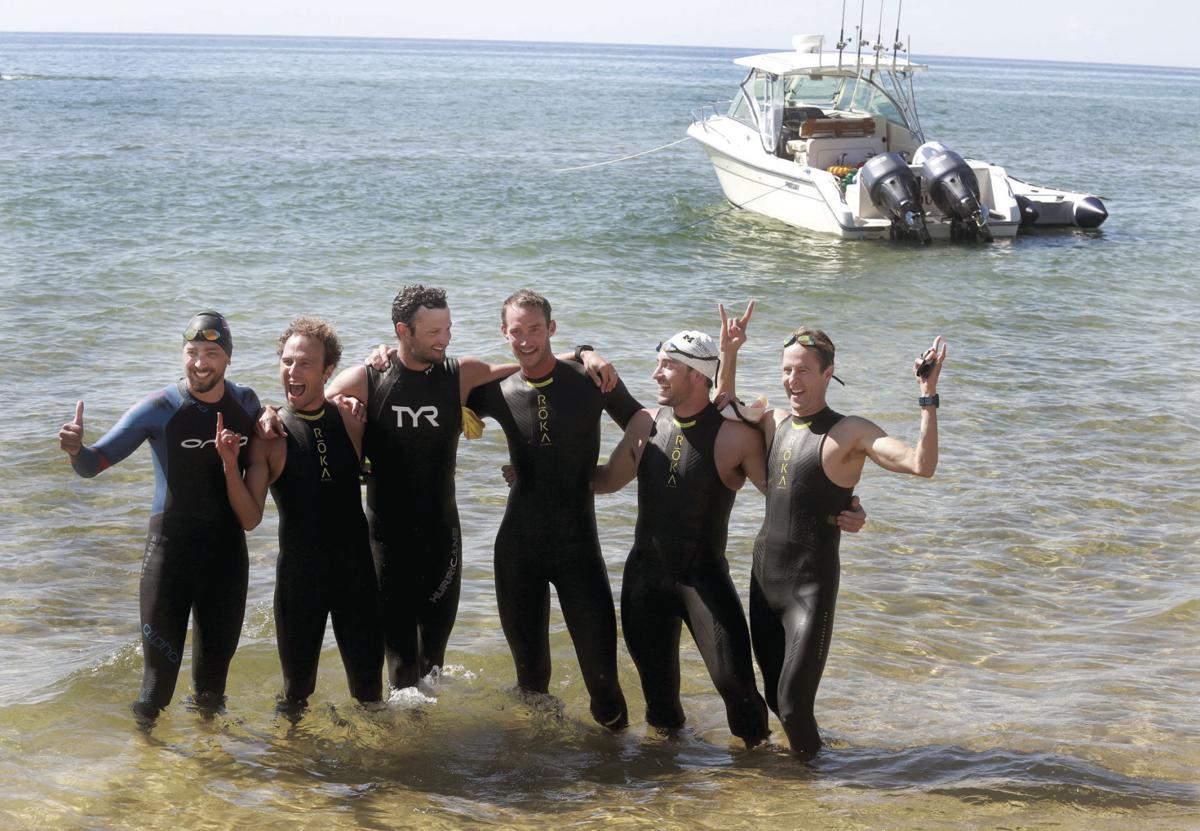 Members of team EpicSwim congratulate one another on the shore of Lake Michigan in Ludington State Park just north of Big Sable Point Lighthouse.

Members of team EpicSwim congratulate one another after completing the 60-mile swim Wednesday.

Jon Ornée, Nick Hobson, Matt Smith, Todd Suttor, Dave Ornée and Jeremy Sall walked out of Lake Michigan and onto the beach just north of Big Point Sable Lighthouse with arms around one another as they were greeted by family and friends Wednesday after swimming 60 miles across Lake Michigan.

The group started on Tuesday evening in Two Rivers, Wisconsin, and swam across the 60-mile span of Lake Michigan to Ludington.

“It is an unbelievable feeling,” said Jon Ornée, the ringleader behind this relay-style swim.

The swim took just under 21 hours to complete. The relay consisted of each person swimming for a half hour at a time and then resting for two-and-a-half hours before swimming again.

“We started off by swimming the first five minutes as a group in Two Rivers,” Ornée said. “We ended the swim the same way. After that initial five minutes the order was determined alphabetically.”

As the swimmers were nearing the shoreline at Ludington State Park Wednesday, Jon and David’s mother looked on, cheering.

“They have been dreaming about this for a long time,” Carole Ornée said

Julie Ornée said she was so proud of her husband, David, and all of the guys who took part in the swim.

“It is such a feat that they have been planning for such a long time,” she said. “It is amazing that things went off with out a hitch. It has been a great experience to track their progress along the way.”

Family and friends were not the only ones tracking team’s progress across the lake as many were following along on the team’s Facebook page on EpicSwim 2020. Video clips, photos and updates were posted along with a tracking of their swim across the lake via Bluelane, a realtime tracking device.

Along with family and friends, team EpicSwim was greeted by Jim Dreyer, who completed a solo swim from Two Rivers to Ludington in 1998.

Dreyer said he had to be here to congratulate the swimmers in person.

“I could not be happier for team Epic,” he said. “I had to be here to see them come in and successfully make it to Michigan. I kidded them that I warmed up the water for them 22 years ago.

“They really knocked it out, just under 21 hours. Mother Nature was smiling on them. They created some memories here today that they will carry with them for a lifetime.”

“I am feeling overwhelmed with joy and gratitude,” Jon Ornée said. “It took tons of work and a crew of seven people who volunteered to do this thing that was important to us. We are grateful to our families for allowing this to happen and really grateful to this amazing body of water that we get to enjoy and take for granted.”

Ornée was very thankful for the weather and the lake for giving the team safe passage.

“I have done a handful of goofy events in the past couple years,” said Ornée. “This one was no exception but there were so many hurdles to get to the starting line, that when you do start, it is just pure joy.”

Ornée said until the group started swimming Tuesday evening, the mission was in doubt. But once they started, it was a huge sense of relief and excitement.

“We had a lot of adversity getting to the starting line and some during, when we jumped in the lake at Two Rivers the water temperature was 51 degrees, which took our breath away a little bit but it warmed up quick. We had two-to-four-foot waves during the night which made it pretty bumpy but they were heading in the right directions. We were bobbers out there but it wasn’t slowing us down.”

Ornée said the group was planning on this swim being 60 miles but he thinks it ended up being 55 miles because they were able to go pretty straight. The group also did not have to deal with strong currents around the point.

The team used two boats, a smaller boat that they would swim behind and a bigger lead boat which was used to house the swimmers as they waited to swim.

“We basically had a three week window to get this swim done.” Ornée said. “The reality of this is you are holding all the team members’ lives and their families’ schedules hostage, so we all agreed on the three week windows with our families. In order for this team to get it done, it had to be this week.”

On Wednesday, the team completed the first relay-style swim of its kind to finish the cross Lake Michigan swim from Two Rivers to Ludington and joined Jim Dreyer and the only swimmers to accomplish the feat.

The swim was also a fundraiser for the group and raised money for FLOW (For Love Of Water), a Traverse City-based nonprofit committed to protecting and preserving the Great Lakes.

• Jon Ornée is an elite triathlete who has won several local and regional triathlons along with a handful of running and cycling events. He’s been dreaming of putting together a relay team across Lake Michigan for the past seven years.

• Nick Hobson was a competitive swimmer in high school in Scotland. He has lived in Michigan for the last six years. Hanson swam solo from Holland to Grand Haven (21 miles) in Lake Michigan in each of the last two summers.

• Matt Smith is a former elite marathoner turned elite triathlete. Matt’s athletic background is running where he was the team captain for two NCAA Final Four finishes (1994-fourth, 1995-second) while at Northern Arizona University. He is a 5th grade teacher and enjoys spending time on the trails with his two boys and his wife.

• Todd Suttor is a former college swimmer at Olivet Nazarene University, specialized in the 50-meter freestyle and a part of the 2016 and 2017 NAIA national championship teams. Todd transitioned his swimming to triathlons post college where he races competitively for Michigan Awesome Triathlon Team.