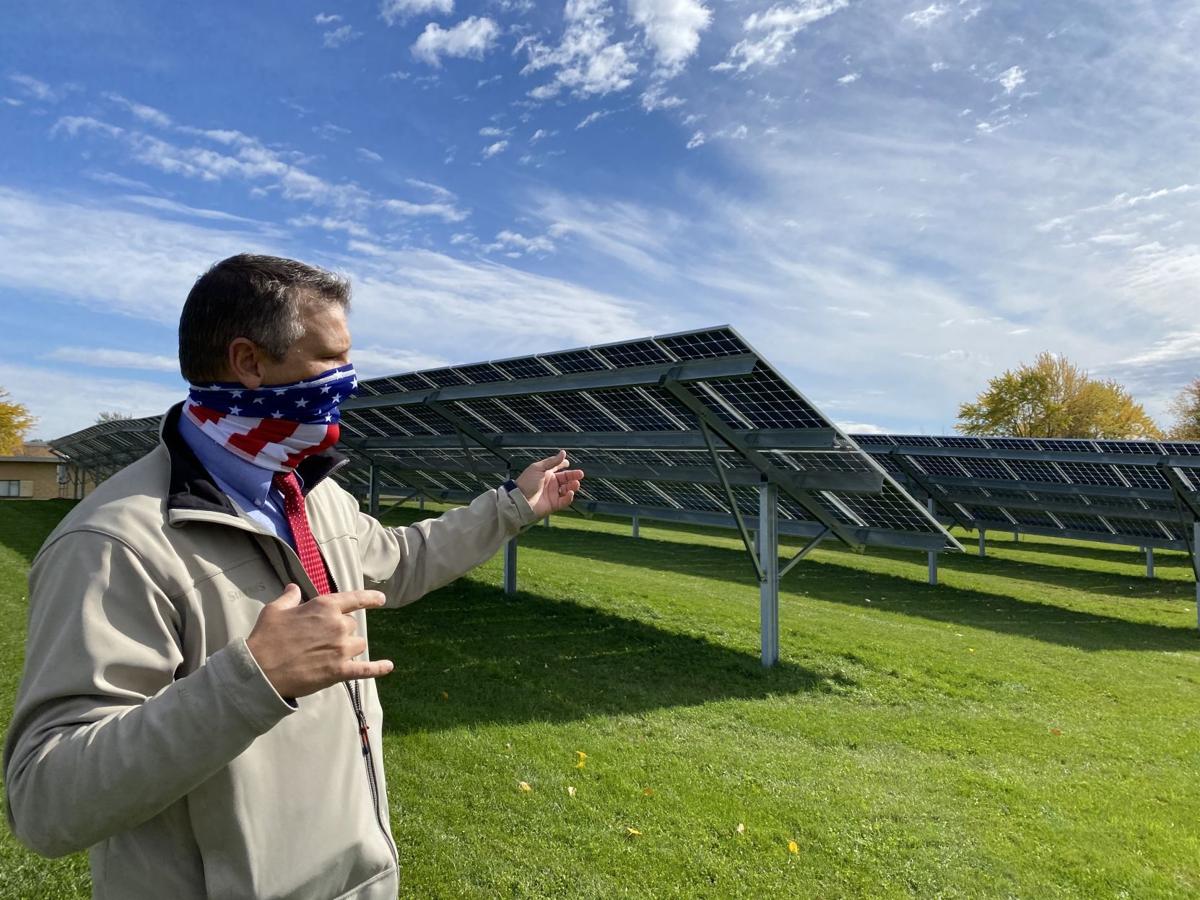 Mason County Central Superintendent Jeff Mount stands beside one of two solar arrays at the school grounds in Scottville. 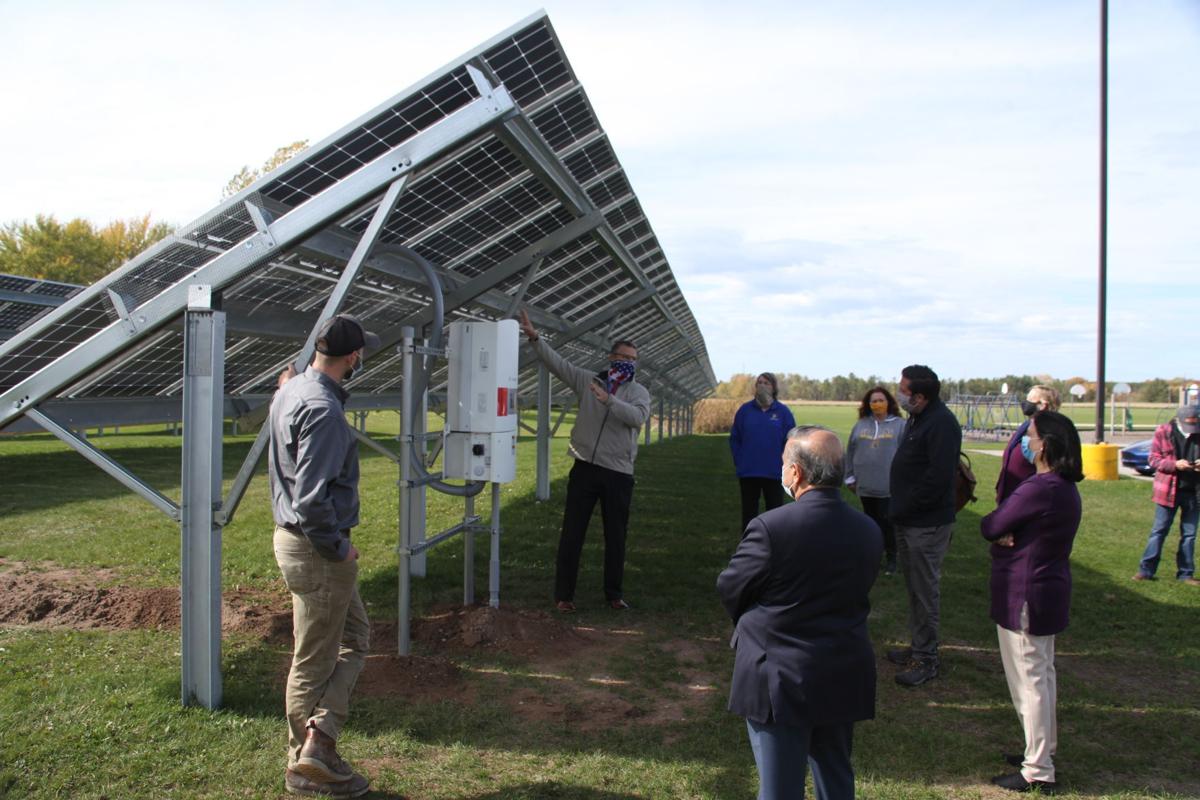 Mason County Central is now home two new solar panel arrays, the result of a partnership between the school district, Harvest Solar and Sunlarge Industries. On Tuesday, Ken Zebarah Jr., director of sales for Harvest Solar, and MCC Superintendent Jeff Mount, talked about the panels with stakeholders and members of the school board. 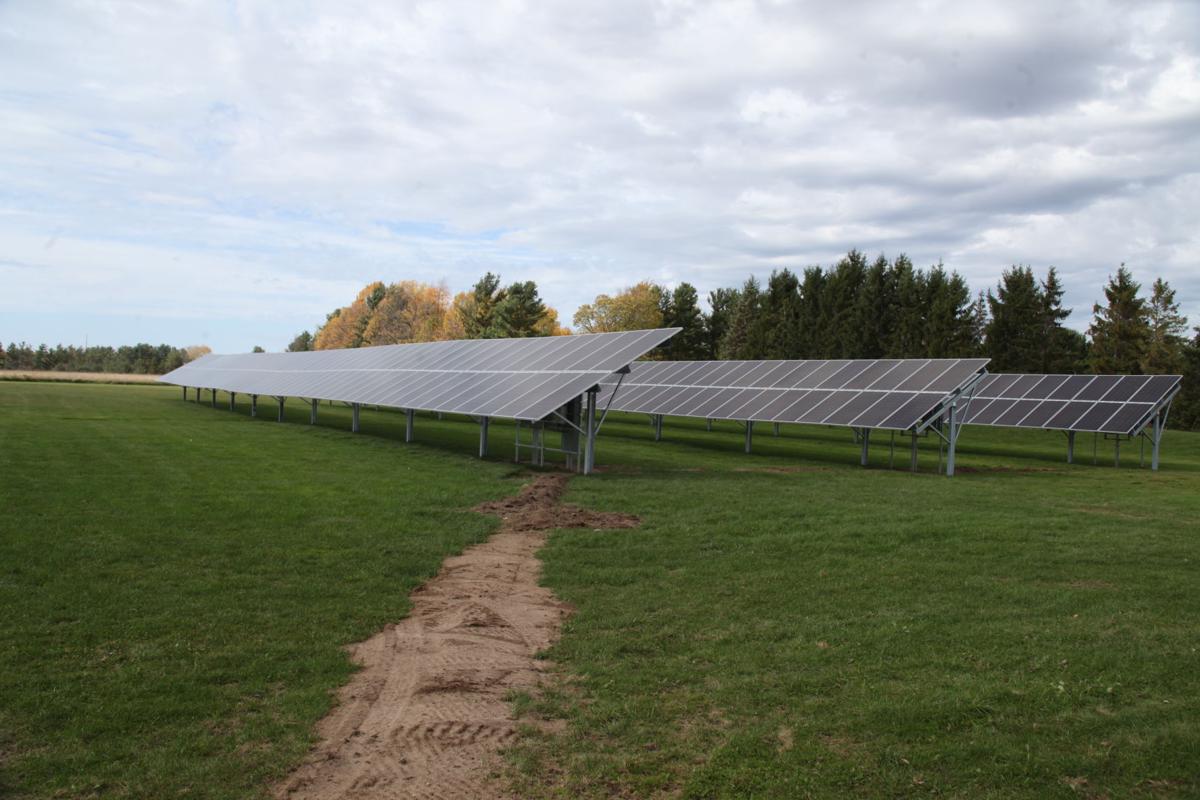 Mason County Central Superintendent Jeff Mount stands beside one of two solar arrays at the school grounds in Scottville.

Mason County Central is now home two new solar panel arrays, the result of a partnership between the school district, Harvest Solar and Sunlarge Industries. On Tuesday, Ken Zebarah Jr., director of sales for Harvest Solar, and MCC Superintendent Jeff Mount, talked about the panels with stakeholders and members of the school board.

On Tuesday, school board members and stakeholders gathered at the grounds for the unveiling of two massive, 180-foot solar panel arrays — one outside the high school, and one outside the Upper Elementary.

MCC is the first school district in the state to house solar panel arrays on its grounds, and will soon be the first to be partially powered by solar energy, according to Superintendent Jeff Mount. Before the end of the week, the two panel arrays will provide power to the school buildings, “at no cost to the taxpayers and no cost to the district,” according to Mount.

All that remains is an electrical inspection which is set to be conducted Thursday.

Tuesday’s event marked the conclusion of a project nearly two years in the making, as well as the end result of a collaboration between MCC, Sunlarge Industries and Harvest Solar.

Ken Zebarah Jr., director of sales for Harvest Solar, was on hand Tuesday to talk about the solar arrays and how they work, fielding questions from Mount, school board members, MCC Business Manager Kris Courtland-Willick, as well as Dr. Sarode Pundaleeka, Sunlarge director, who was also in attendance with his wife, Geta.

Zebarah said the panels are already generating power, and, after Thursday’s inspection, they’ll be providing that power to the buildings, with 121.6 kilowatts at the Upper Elementary and 164.6 kilowatts at the high school. When the sun is out, as it was during much of Tuesday’s demonstration, even more energy is produced.

“We were actually contributing to the grid,” Mount told the Daily News later.

The power-purchase agreement that made the installation possible is a positive for all involved, according to Zebarah, benefitting both Sunlarge and Harvest, and saving money for the school and local taxpayers.

“The investor (Sunlarge) says, ‘I’ll pay for this, I’ll install it, I’ll take all the kickbacks and grant money’ … and in return the school will pay a rate per kilowatt hour, which is less than what they would have paid (an energy provider),” Zebarah said. “Harvest is paid for engineering and construction, and it’s a win-win.”

Zebarah said the coronavirus pandemic had an impact on the construction process, but it could have been worse.

“It just delayed things a bit,” he said.

The project was initially approved by the school in January, and construction was set to be finished by summer. Ultimately, Mount said the wait was well worth it.

He said the solar arrays are a continuation of an ongoing effort to support renewable energy at the school district, starting with an energy efficiency agreement with Honeywell 15 years ago, and continuing through the district’s recent award-winning Honeywell project, which saw LED lighting installed throughout the district, among other improvements.

“We have a mindset of being good stewards of the taxpayers’ money, understanding that renewable energy is free, and having an open-minded board and admin team that looks at it and says, we can do this,” Mount said. “We’re not losing anything, we’re gaining a lot.”

Mount said there could be more solar arrays in the school district’s future. There is not enough space at the middle school to accommodate the installations, but Scottville Elementary is a “good possibility” for the future.

“We might do another project down the road,” Mount said. “But you know, when you see the meter running, you know we’re (already) saving the district money.”

Mount said there will be classroom benefits to the solar installations, too. The school district is hoping to install smart TVs in the adjacent schools, where students and teachers can monitor things like weather, the amount of energy provided and even the number of “trees saved” through an interactive dashboard that will be accessible to the public.

“The educational components of this are just phenomenal,” he said. “We’re going to put a TV in the high school and Upper Elementary to be a conversation piece and an educational piece… Beyond just being a static unit, it is an educational tool.”

Brian Maillet, CEO of Renewable Energy Evolution, which represented Sunlarge for the project, said MCC is the first in the state to join in what’s shaping up to be a promising new trend.

“People are starting to pay attention to solar at schools. It’s good for the district, good for the environment… and good all around,” Maillet said. “This is a great project; Michigan is an up-and-coming solar market. (MCC is) leading the charge here. The genie’s out of the bottle and people are paying attention.”

Mount credited Willick with encouraging the district to look into the solar option.

“I can’t give enough credit to … Kris Courtland-Willick for coming in and saying we should look into it,” Mount said. “(She) got this whole ball rolling.”

He also credited the school board and Thrun Law Firm, for ironing out the kinks of a somewhat unprecedented agreement.

“All the stars aligned,” Mount said.