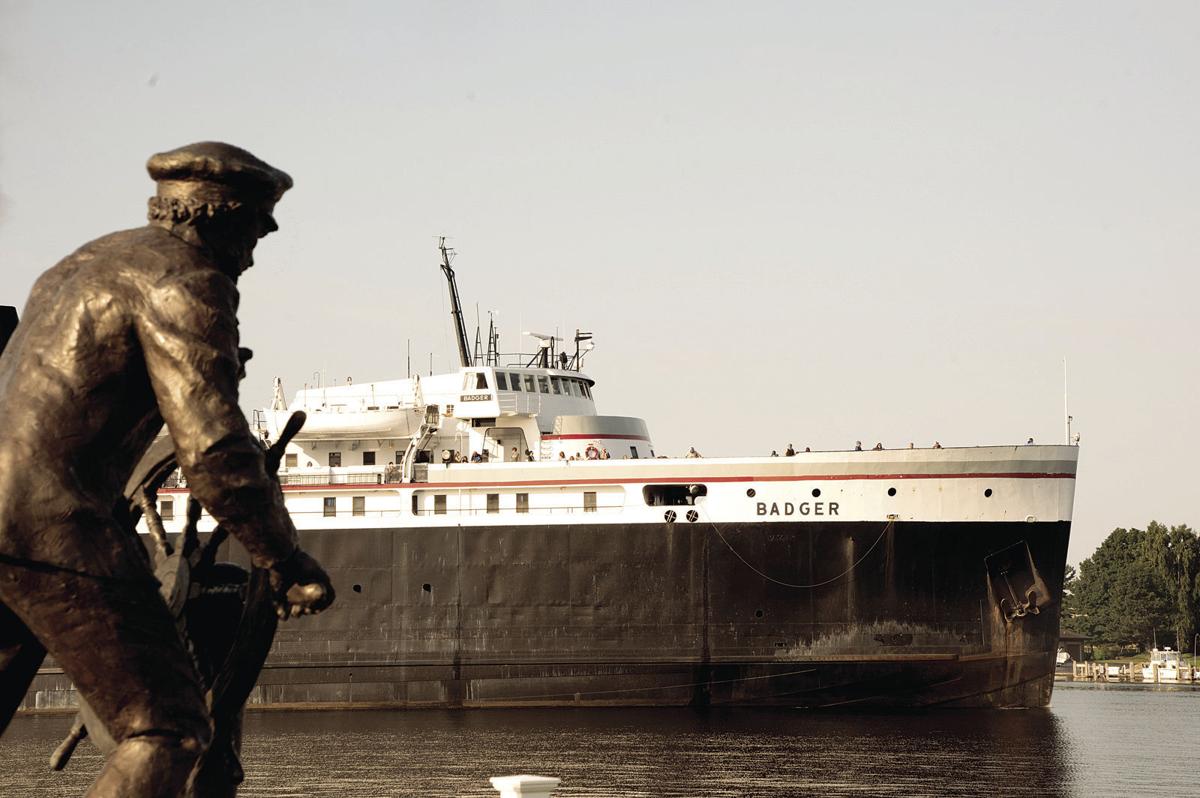 The SS Badger departs its dock in Pere Marquette Lake Sunday morning. In the foreground is the Spirit of Ludington sculpture at Waterfront Park. Both the Badger and the sculpture speak of Ludington’s maritime heritage. 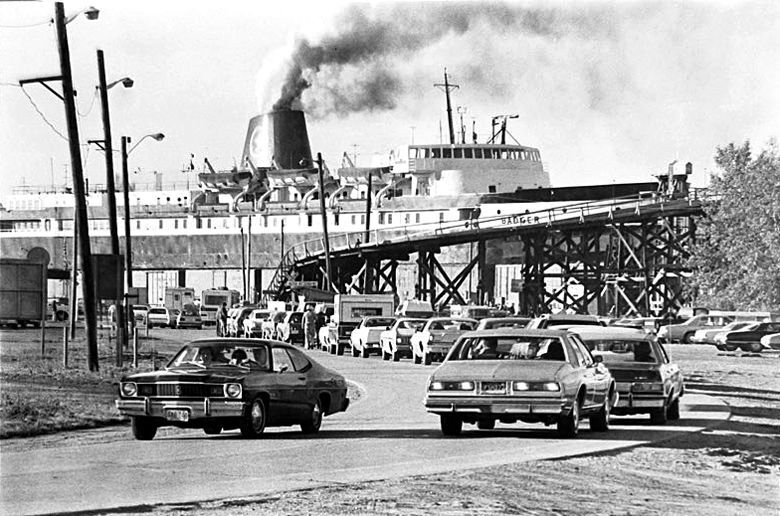 Passengers line up their vehicles to board the SS Badger. 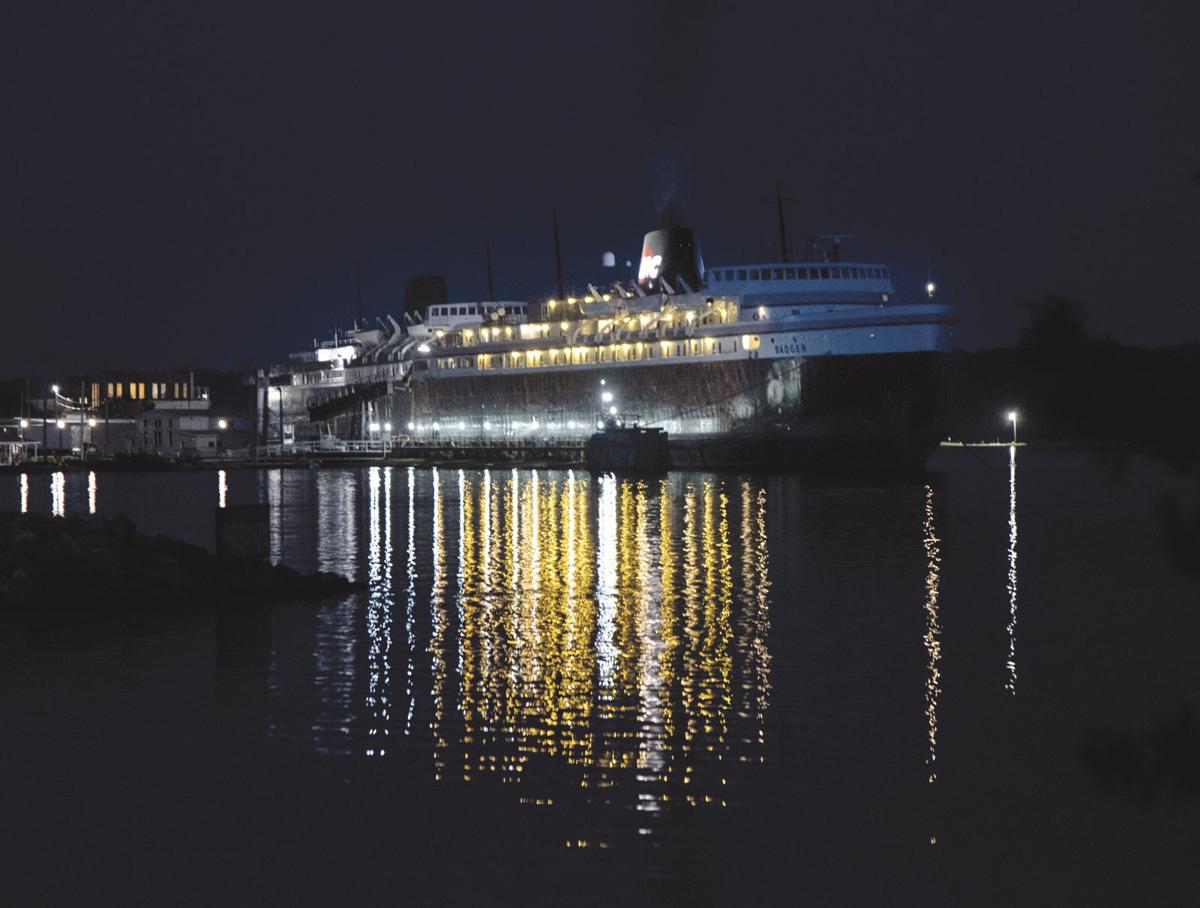 Lake Michigan Carferry’s SS Badger, which this pandemic-truncated season is only running one trip daily to and from Manitowoc, Wisconsin, sits quietly at its Ludington dock on a calm Sunday night, Jan. 3. It’s lights reflect festively in the water of Pere Marquette Lake.

People look on as the SS Bader leaves the Lake Michigan Carferry dock to an escort provided by the Ludington fire boat and the U.S. Coast Guard boat Friday.

The SS Badger departs its dock in Pere Marquette Lake Sunday morning. In the foreground is the Spirit of Ludington sculpture at Waterfront Park. Both the Badger and the sculpture speak of Ludington’s maritime heritage.

Passengers line up their vehicles to board the SS Badger.

Lake Michigan Carferry’s SS Badger, which this pandemic-truncated season is only running one trip daily to and from Manitowoc, Wisconsin, sits quietly at its Ludington dock on a calm Sunday night, Jan. 3. It’s lights reflect festively in the water of Pere Marquette Lake.

People look on as the SS Bader leaves the Lake Michigan Carferry dock to an escort provided by the Ludington fire boat and the U.S. Coast Guard boat Friday.

A new chapter in the lives of the SS Badger, SS Spartan and the tug-barge Undaunted/Pere Marquette 41 is underway as Interlake Holding Company announced Wednesday that it bought the ships, as well as Lake Michigan Carferry and Pere Marquette Shipping companies.

Interlake made the announcement around 3 p.m. Wednesday, and Mark W. Barker, company president, was happy about making the acquisition.

“We’re just excited to acquire this vessel and this operation. It is really iconic and historic,” Barker said. “We look forward to continuing that and continuing to build on that relationship.

“I think we’ve always been interested in the Pere Marquette and the Badger. We’ve known them for a long time. My father and I have known Bob (Manglitz, LMC president), and we’ve known Chuck Leonard. It was a relationship (before the purchase).”

The two companies and the ships were owned by Bob Manglitz, Don Clingan and Jim Anderson.

“I think what happened was there was a sense in the shareholders and a lot of employees involved that we needed to have a succession plan. The youngest shareholder is 77 years old. We made the decision to sell, and we found a very strong, very customer-friendly and very employee-friendly company. Interlake fit to a T,” Manglitz said. “They were a great match. I talked to the father (James Barker) probably 10 to 15 years ago, and he expressed an interest. I kept that note.

“I feel so fortunate. I think they’re the largest privately owned shipping company… We feel very secure passing the baton and (in their) experience and business knowledge.”

In a press release from Interlake, Clingan stated that the sale was a “milestone,” adding that Interlake will “extend the legacy of the Badger into the future” for both Ludington and Manitowoc, Wisconsin.

“My dad has always been proud and very humble about his efforts in refurbishing the Badger and was an integral part of making it a family-friendly business (for employees and patrons),” said Beth Kirby, Anderson’s daughter. “He worked with Charles Conrad right from the beginning. It all started over a cup of coffee at the Ludington Burger Chef.

“He is happy to know the legacy is continuing with the new owners.”

The news was a surprise in the community, and Ludington & Scottville Area Chamber of Commerce President and CEO Brandy Miller was appreciative to the three LMC and P.M. Shipping owners.

“On behalf of the chamber, I’d like to thank the previous ownership group of Bob Manglitz, Don Clingan and Jim Anderson for their years of service, dedication to our great community and loyalty to the chamber over the years,” said Miller, who, along with her father, former Ludington Mayor John Henderson, helped to spearhead the Save Our Ship campaign. “I’d also like to welcome Interlake Holding Company to the community, and we look forward to forging a relationship with them.”

Barker said Interlake Holding Company purchased all of the vessels and property owned by LMC and P.M. Shipping. The deal was in the works for several weeks, and it was finished Wednesday morning. The employees at both companies were informed after it was completed, and the public announcement was made in the afternoon.

Barker wanted to reassure the community and the companies’ employees that very little would change in the future of the ships.

“We’re keeping most of the employees,” he said. “It’s a great operation, and it’s our goal to continue that operation in Ludington.”

Barker said some employees may leave because of personal reasons or retirements.

The transaction was completed at 10 a.m. Wednesday morning, and the company — which will be called Interlake Maritime Services to manage the two Ludington-based companies and Interlake Steamship Company in Ohio — is sorting through the employment details.

“We’re still walking through that,” Barker said. “There (are) no major changes in our plans.”

Barker was particularly excited about the work of the Undaunted/P.M. 41, and what it could mean for his company. He said the market that the tug-barge has created for itself in hauling pig iron, scrap and stone is very appealing.

“That’s an interesting market and they have done a nice job of continuing that market,” Barker said.

The acquisition includes the stone dock that is currently leased to Reith-Riley near the foot of James Street as it starts to turn west for loading onto the SS Badger. Barker said his company may look into having its current group of freighters bring stone to the dock with its new lessee.

The dock in Manitowoc is publicly owned, and Barker said the company intends to continue to run the SS Badger to and from Ludington to its sister port there.

Overall, Barker said he and his company appreciate the opportunity to continue the legacies of the companies.

“This is a neat opportunity for us,” he said. “We’ve spent a lot of time in Ludington. We’ve come to enjoy the town. We look forward to building and continuing that. We’re super thrilled with the team and the operation. We’re excited.”

Conrad purchased the SS Badger, SS Spartan and the tug-barge P.M. 41 out of bankruptcy in the early 1990s by Michigan-Wisconsin Transportation, and the SS Badger has operated as cross-lake ferry to and from Manitowoc, since 1992. His family helped to get Lake Michigan Carferry and Pere Marquette Shipping in business with the three current owners — Manglitz, Conrad’s son-in-law, along with Clingan and Anderson.

“When the Badger ended service in November 1990, many employees and local citizens believed that the era of carferry service ended,” Clingan stated in a press release from Interlake. “The rebirth of the Badger in 1992 marked a major milestone in maritime history on the Great Lakes.”

The SS Badger itself has seen its share of ups and downs. The last steamship on the Great Lakes has endured the changes such as what to do with its coal ash and a variety of small issues that delayed shipping at times. It also recently weathered an embezzlement scheme by a former employee.

On the bright side, the community rallied to its cause with a Save Our Ship campaign when prospects looked grim about whether the ship could keep going despite the coal ash issues raised by the Environmental Protection Agency. It’s been sailing for more than 60 years, and is listed not only as a historic site for the state of Michigan, but also on the National Register of Historic Places.

And for nearly all of its sailings, people can be found waving goodbye or hello as it sails into and out of port.

What the SS Badger means to the communities of Ludington and Manitowoc is not lost on Manglitz.

“The communities of Manitowoc and Ludington and the people have a sense of ownership in the Badger,” he said. “It was like nothing I have ever been involved with. And the pride. I think we were very fortunate to have that. I hope they’re happy to have a strong company backing it.”

Manglitz would often say that he was given the honor and duty from his father-in-law to carry on the SS Badger into the future, and Conrad really wanted him to carry the ship forward.

“He wanted to see the carferry run for another 100 years. My feeling is that I did it for 26 years, and Interlake has accepted it to do it for the other 74.” Manglitz said. “…We’ve got a lot of employees and I’m extremely proud of the work that they’ve done. I think we’re very fortunate with this match.”

Barker said he looks forward to carrying on the operation of the SS Badger.

“The Badger is an iconic carferry. We look forward to continuing operations there and continue to look at that operation,” he said.

Manglitz said he’s already rented a slip in Harbor View Marina for next summer, and he looks forward to seeing the SS Badger continue to sail.

“It’s time for me to sit in the bleachers and cheer them on,” he said. “It’s their turn, and they’ll do a great job.”

ABOUT INTERLAKE HOLDINGInterlake Holding is owned by a pair of families, the Barkers and the Tregurthas, Mark Barker said.

“We’re two families that own several maritime businesses,” Barker said. “Paul (Tregurtha) and my dad have been in business together over the years, and in 1986 they came together and started to work together in a private company to form Interlake Steamship. We own a tug-barge and a there’s a ferry boat business owned by our families together.”

Interlake has a 130-year history on the Great Lakes, though the name of the company and the owners changed during its lifetime, according to its website.

Originally established as Pickands Mather & Company in 1883, the Interlake Steamship Company was privately purchased by James Barker in 1987, who is the current chairman of the board. Paul Tregurtha is the vice chairman.

In addition to the Badger and Undaunted, the Interlake Steamship’s fleet includes nine freighters that sail on the Great Lakes, most which were built in Michigan and Ohio.

Two of the ships in Interlake’s fleet are named for his father and mother, and another two are named for the Tregurthas, Barker said.

Several of the ships were lengthened or converted into self-unloading vessels when they became part of the fleet. The Lee A. Tregurtha served as a tanker in World War II. After several conversions by other companies, it joined Interlake Steamship in 1989.

From 2007 to 2017, Interlake spent $100 million on its modernization program that refitted ships to be more environmentally friendly.

Interlake Holding also owns Seastreak, which has a fleet of five passenger ferries that operate in New York Harbor and along the eastern coast, some which run seasonally.

Hannah Hubbard contributed to this report.