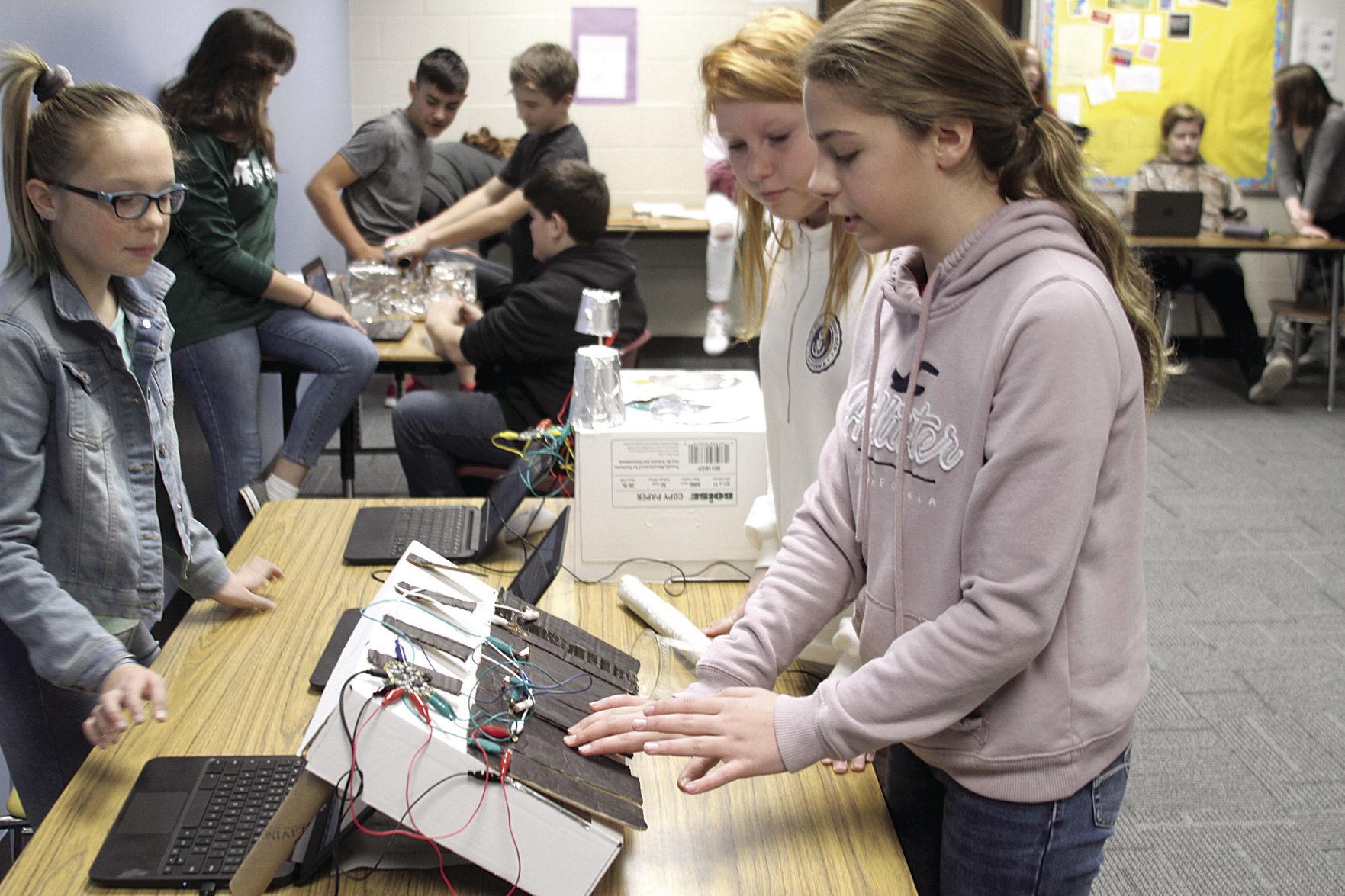 Mason County Central Middle School seventh-graders Callee Bourgette, Keeli Johnson and Ellie Bendele assembled a three-piece digital instrument set for a coding project that was displayed as part of a computation skills showcase on Wednesday at the middle school. 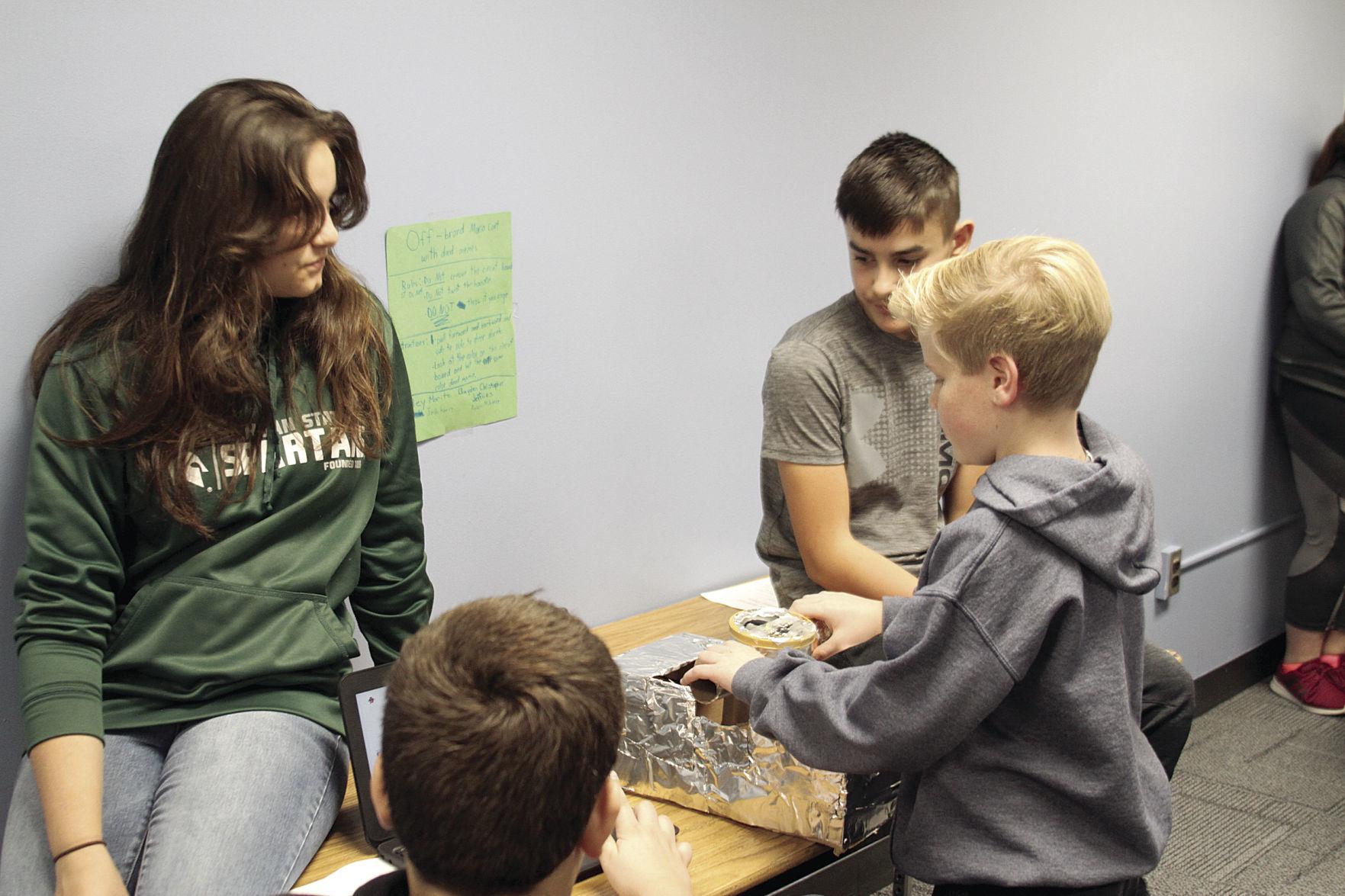 Mason County Central Middle School seventh-graders Callee Bourgette, Keeli Johnson and Ellie Bendele assembled a three-piece digital instrument set for a coding project that was displayed as part of a computation skills showcase on Wednesday at the middle school.

SCOTTVILLE — Seventh-graders had a chance to demonstrate their coding skills during a computing project showcase Wednesday at Mason County Central Middle School.

Students in Chandra Tacktor’s class spent the morning demonstrating and explaining their projects to younger students as part of a larger coding project that’s linked up with MCC’s coding curriculum.

“The seventh-grade class is showing the sixth-graders,” Tacktor said. “They had coding in sixth grade and they had coding in seventh grade, and now they’re combining everything from the Code.org (Computer Skills Discovery) curriculum to make their final projects.”

Those final projects included a host of different styles and themes, as the groups of students were encouraged to be creative and infuse their projects with their own flourishes, according to Tacktor.

“They have a three-piece band with three different sets of code and three different programs running at the same time,” Tacktor said of the group. “They wanted to push themselves, and I said, ‘If you can do it, go for it.’”

The instruments consisted of a drum set, a keyboard and a flute.

“We have a piano that, when you click it, it makes noises, and a flute that, when you blow into it, hears the sound of the air in your mouth and it will play a noise,” Bendele said.

Bourgette said the hand-made instruments worked through the use of sound sensors. The flute, for instance, featured a cup fixed to its side. People could blow into the cup, which was fitted with sensors that picked up on the air flow. The instrument was coded to create sound as a response.

The drums were connected to alligator clips to help pick up on the sound being made when drum sticks touched aluminum-covered sensors arranged like a drum set.

“We all just thought about instruments that would make different beeps when you (play) them,” Bourgette said.

Another group — which included Riley Moritz, Rylen Mihalek and Brayden Jeffries — created a game using a circuit board and motion sensors attached to a joystick shaped like a motorcycle handle.

To play the game, sixth-graders could select colored images on a screen that was connected to the joystick to score points.

“It senses movement from side to side and up and down, and the circuit board displays a certain color,” Moritz said.

Jeffries explained how the game could be won.

“We had the code set up so that it will set a color on the screen and it will show up on white LEDs (on the joystick),” Jeffries said. “It will set it to a color, and you have to get that color (on the display), and you need 11 points to win.”

The application of coding to a physical process is an important part of the project, according to Tacktor.

“It’s a hardware piece and a software piece together,” she said, adding that the projects were not easy to put together successfully, and skills from previous years of curriculum were utilized to see the work completed.

“They’ve been learning the skills over the past two school years,” she said.

Tacktor added that the projects showcased on Wednesday took about three weeks of class time to finish.

For the assignment, students worked on a code, then built prototypes for the demonstration.

“It was quite a process,” Tacktor added. “They worked out some kinks, but they made it work.”