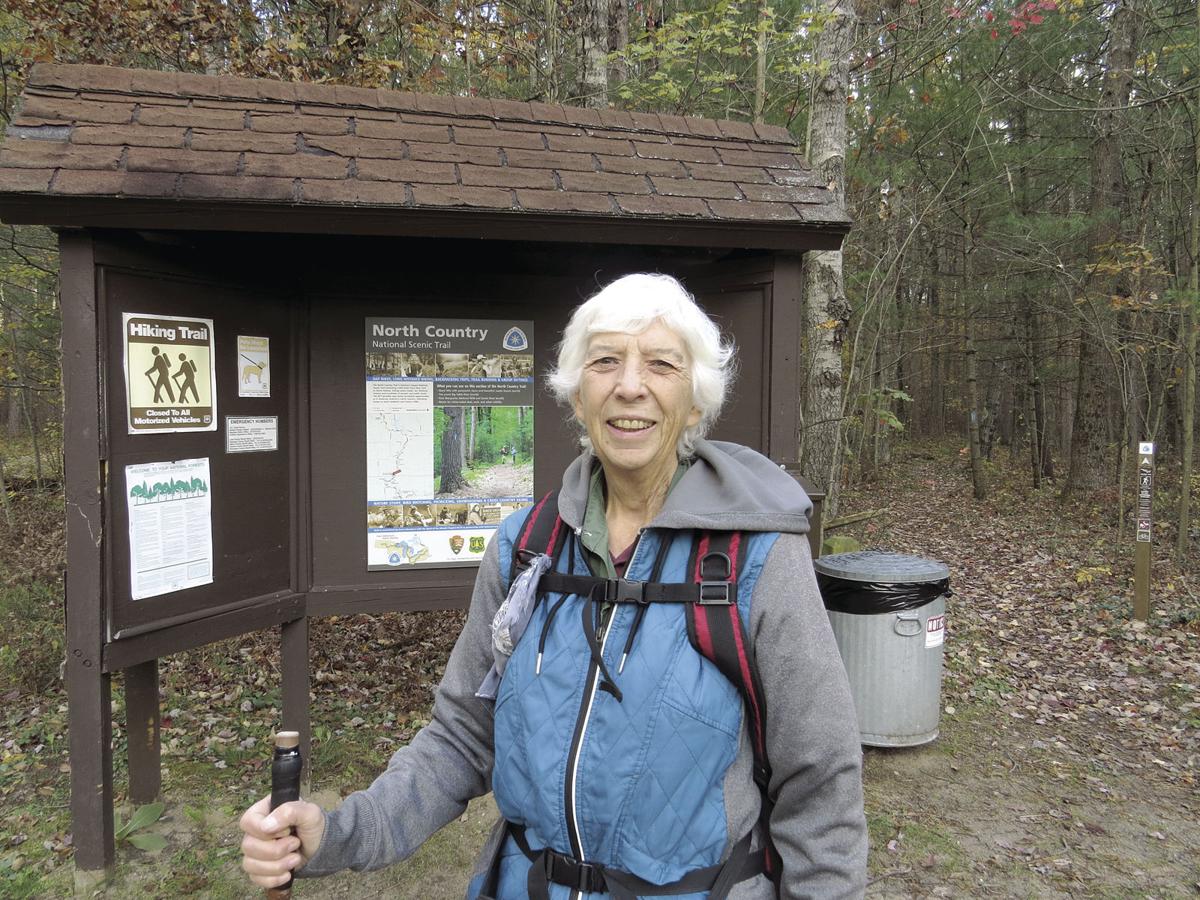 Joan Young poses for a photo at the Timber Creek Trailhead in Lake County where the North Country Trail crosses U.S. 10, where her hike will begin Dec. 1. 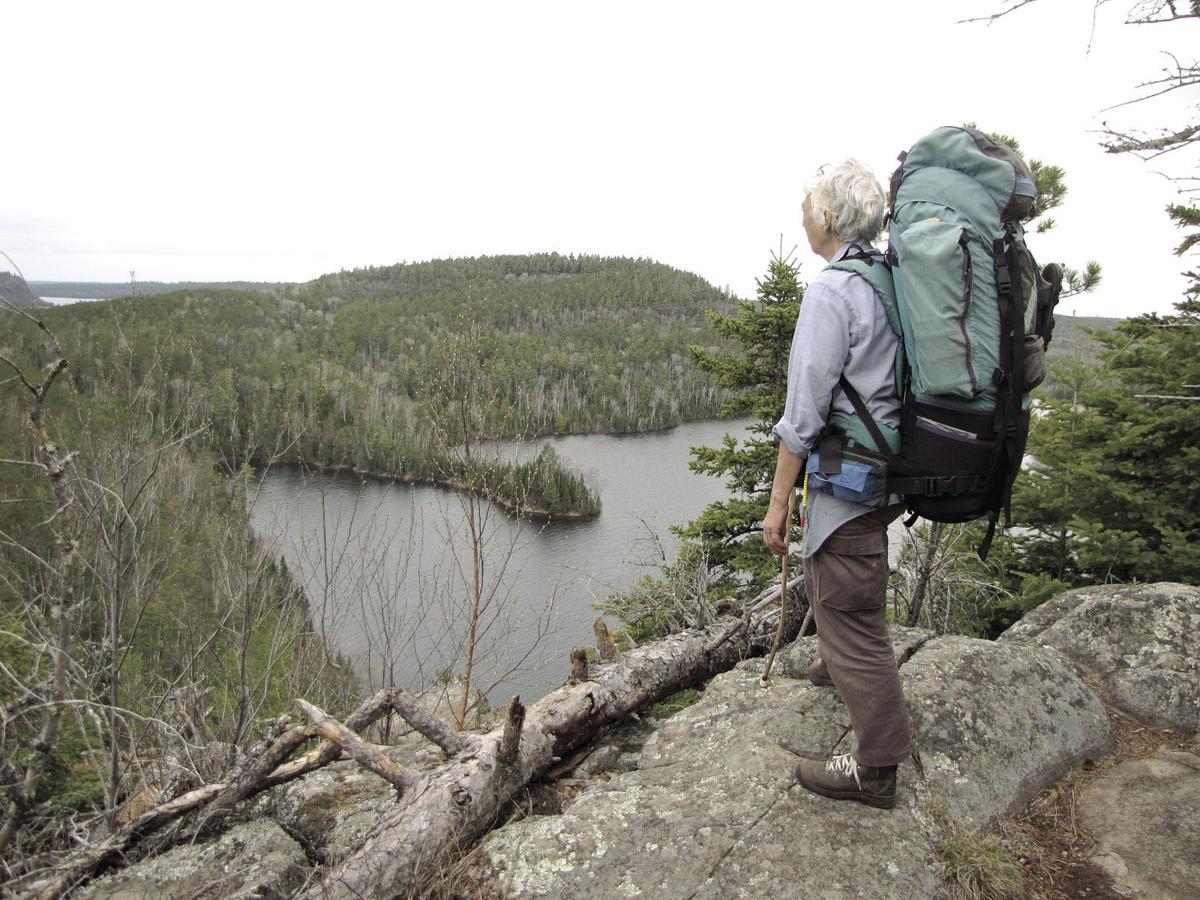 Joan Young at an overlook for Mountain Lake in northern Minnesota with Canada on the opposite shore on the Border Route Trail, which is part of the North Country Trail, in 2009. 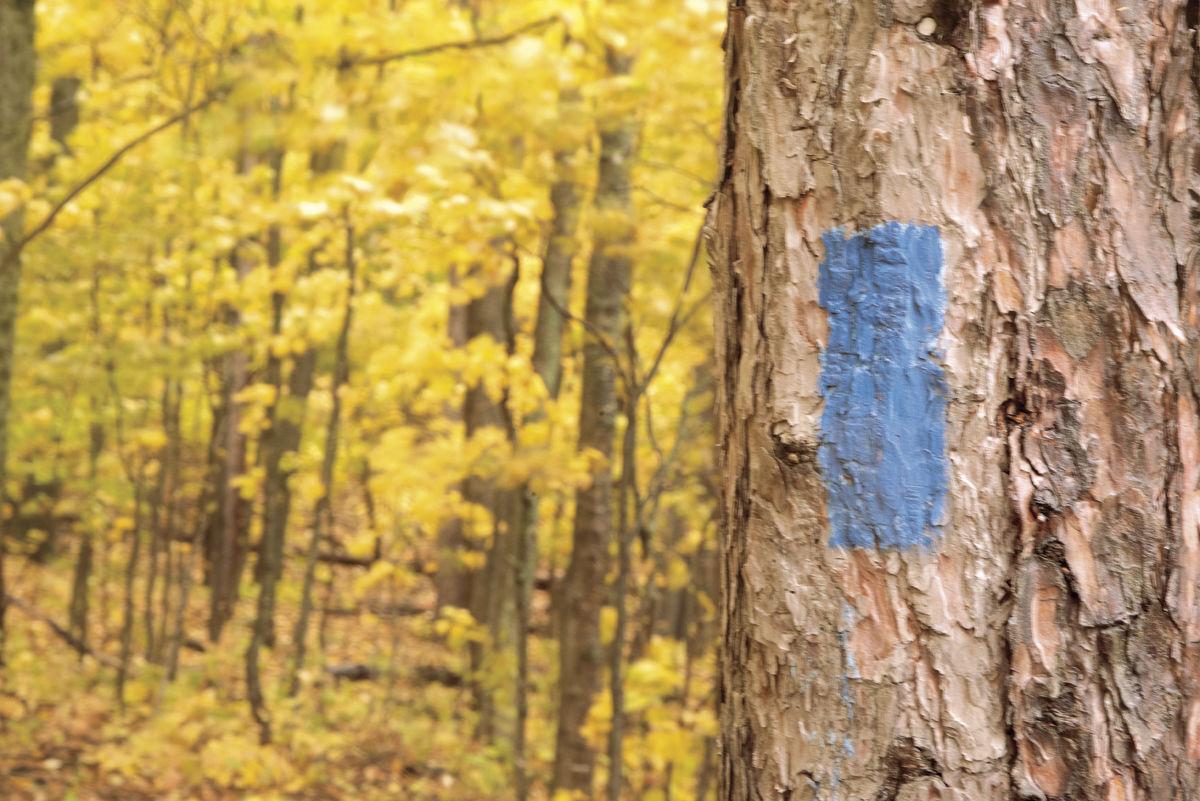 A blue stripe on a tree is the marker for following the North Country Trail. Scottville native Joan Young will be hiking the entire trail starting this week. 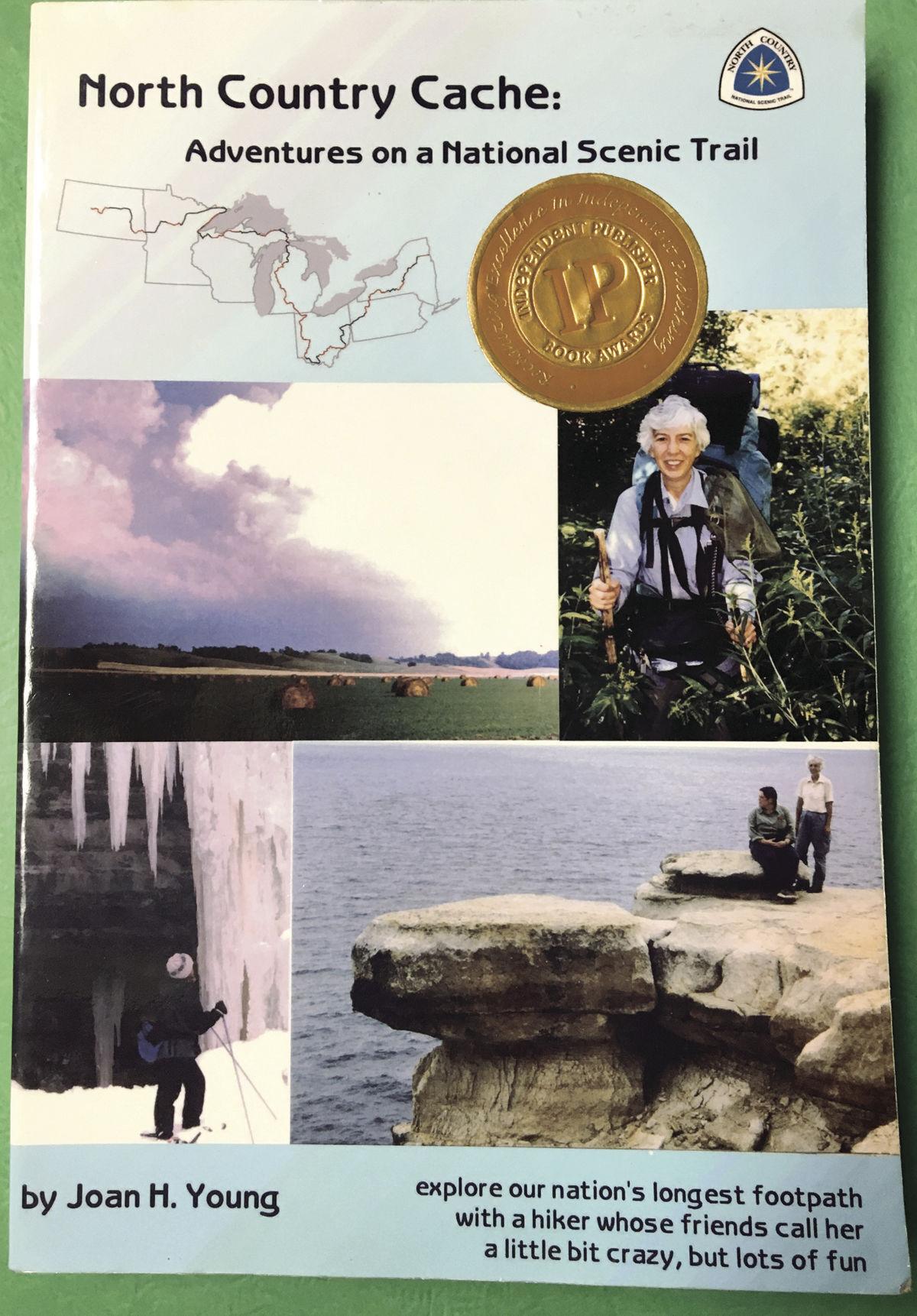 A copy of Joan Young’s book, “North Country Cache: Adventures on a National Scenic Trail.” Young, the first woman to hike the entire trail in sections, plans to hike its entire length in one adventure.

Joan Young poses for a photo at the Timber Creek Trailhead in Lake County where the North Country Trail crosses U.S. 10, where her hike will begin Dec. 1.

Joan Young at an overlook for Mountain Lake in northern Minnesota with Canada on the opposite shore on the Border Route Trail, which is part of the North Country Trail, in 2009.

A blue stripe on a tree is the marker for following the North Country Trail. Scottville native Joan Young will be hiking the entire trail starting this week.

A copy of Joan Young’s book, “North Country Cache: Adventures on a National Scenic Trail.” Young, the first woman to hike the entire trail in sections, plans to hike its entire length in one adventure.

Joan Young will set out on a hike Wednesday from the Timber Creek Trailhead of the North Country Trail off of U.S. 10 in the Manistee National Forest not from far her Scottville home.

Nothing unusual about that for the veteran hiker, author, blogger and a champion of the North Country Trail which stretches across the northern tier of eight states from Vermont to North Dakota.

When she sets out Wednesday to follow the blue blazes marking the trail, she doesn’t plan on returning home for a year.

Young, 73, plans to walk the entire 4,800-mile-long North Country Trail National Scenic Trail again. Her goal is to do 15 miles a day with a day off about every 10 days. If the hike goes as plans, she would finish back at the Timber Creek Trailhead in a year. If she finds the 15-miles per day pace too much to sustain, she said she’ll just have to hike later into December 2022 — or longer.

Young understands what she’s getting into. More than an avid hiker, she was the first woman to complete hiking the entire North Country Trail 11 years ago. That time, she hiked in sections over a decade in what is known as a sectional hike: different sections at different times with breaks to return home in between.

This time, she said, she plans a continuous hike.

“I hope to reach Vermont approximately in mid-May. Then I will drive to North Dakota and start hiking back,” Young said.

“I’m hiking away from Timber Creek going south, east on the trail. I’ve planned this out on a spreadsheet, which is ridiculous. Things change, but I have to start somewhere, I hope to arrive home Dec. 1.”

A 15-mile hike on a given day doesn’t faze her. But this is no day hike.

“My one concession to age is it is mostly going to be supported. I have this little 13-foot fiberglass trailer I rehabbed. I will be backpacking some, but most of it I have someone who will be with me. They will drop me off in the morning and pick me up at night.”

This reduces what she will carry on days will be picked up and will save time compared to spotting cars at pick-up sites. Friends, family and fellow hikers are signing on to help, and in some cases, to hike with her for chunks of the trail.

About 9 months out of 12 are covered with such support so far.

“I was kind of surprised that many people were willing to be a support person. I am going to be pretty tired. All I’m going to do is walk, blog, eat and sleep.”

She knows one job for the support help, considering the reduced daylight hours of winter.

“I’m not a morning person. I have to be out there when the sun comes up. It’s good I have a helper. Part of it is, they have to poke me to wake me up.”

Every few days, the trailer will be moved to a new base. Young, who is well-known on the trail from her “North Country Cache” book about the hike and her work in promoting, advocating and hands-on construction and maintenance help with the trail, will at times stay also with acquaintances.

“Ever since I finished my section hike on the trail, I have said casually I want to do it again,” she said taking a break from preparations she said she’s obsessing about.

During her section hike, portions of the trail were not built or blazed yet. That led to some difficult hiking conditions at times including bushwhacking through areas or lengthy sections along roads. Much trail-building work has been done since.

She’s curious to see those changes such as the trail built in the Adirondacks, and current work in the Boundary Waters area near Ely, Minnesota, and the Paul Bunyan State Trail in north central Minnesota an area she bushwhacked through last time.

“It’s just astonishing,” she said about the variety of landscapes experienced along the trail and the continuous improvements.

“There’s a bunch of this, because it’s changed, I’ve never seen.”

After years of thinking how – and if – she could do a continuous hike, she had an aha moment.

“I woke up in the night two years ago” she said, realizing she could start in the north, do a flip-flop trip, and go in reverse.

She plans on 56 days of the hike – including the first five – to be backpack camping nights.

“I haven’t been hiking as much as I should because I’ve been getting ready,” she said.

She’s not that worried, she said, about hiking in winter.

“You get into weather problems at one end or another, unless you can do 25 miles a day, which I can’t. I’m not even going to try,” she said.

But she will try to maintain the 15-mile a day rate. Those who ask to hike with her have to be able to do that, or have someone lined up to pick them up as she keeps walking out of necessity to keep up the pace. Not everything can be prepared for.

“I’m 73 and I’m in really good shape. I don’t care if your 17, you don’t know what’s going to happen when you’re out on the trail,” she said. “I know the weather and the topography. All you can do is plan, and see what happens.”

She knows she will be tired and that will test her physically and mentally, especially on bad weather days.

“Despite, the physical problems. It’s 100 percent a mental challenge,” she said.

She’s read about and talked with other long-distance hikers, including the man who just finished the widely known Appalachian Trail as the oldest person to complete that 2,100-mile hike who talked about the struggles he had.

She got the blessing of her husband Omer, who plans on doing a stint as support person.

“Omer is good with this. That was the other piece. I got this plan to walk away from home,” she said. She mulled over how to tell him about it. When she did, Omer told her he was wondering when she was going to do the hike.

Now the time to set out is nearing.

“I am so busy right now I have not gotten the chance to get excited yet,” she said. “It’s started to hit me, but I’m back in the too-busy mode. It’s more than the hike, I have to be ready to leave things for the year.”

She plans to blog daily – when she has service — but for now isn’t planning to write a book this time. In addition to “North Country Cache, Adventures on a National Scenic Trail” she wrote “North Country Quest,” about the completion of that hike. She’s writing fiction these days, but hasn’t ruled out a book on this hike.

The new quest is about to begin.

“I absolutely know what the terrain will be like on this trail, what the weather will be like in North Dakota. The heat and thunderstorms will be the issues there.

“I feel quite prepared at what the trail will throw at me physically. I’m not 25 or 40. I feel like I’m pretty good shape.”

But a question remains to be answered: “Will I get stronger or will it beat me down?”

“I’ve agonized over can I really do 15 miles a day for that many days. If I get in trouble, I will deal with it in the UP next winter.

“I will find out. Barring a major catastrophe, I’m in it for the long haul. If I can’t do 15, I will cut it back and take longer. If you get in snow, so what?”

She will start finding out the answers this coming week setting out from Timber Creek.

One step at a time.