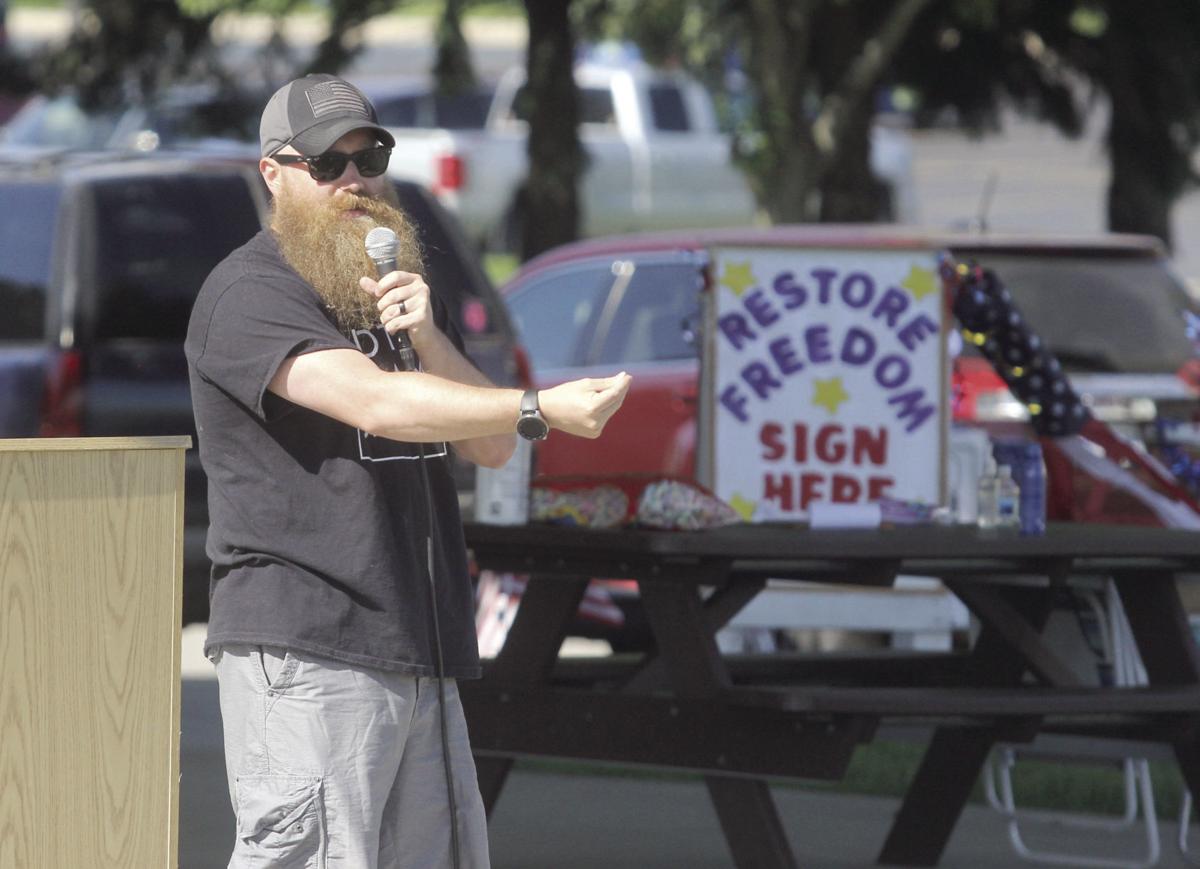 Kevin Skinner of Stand Up Michigan speaks during a Restore Freedom Initiative event Thursday evening at Waterfront Park in Ludington. 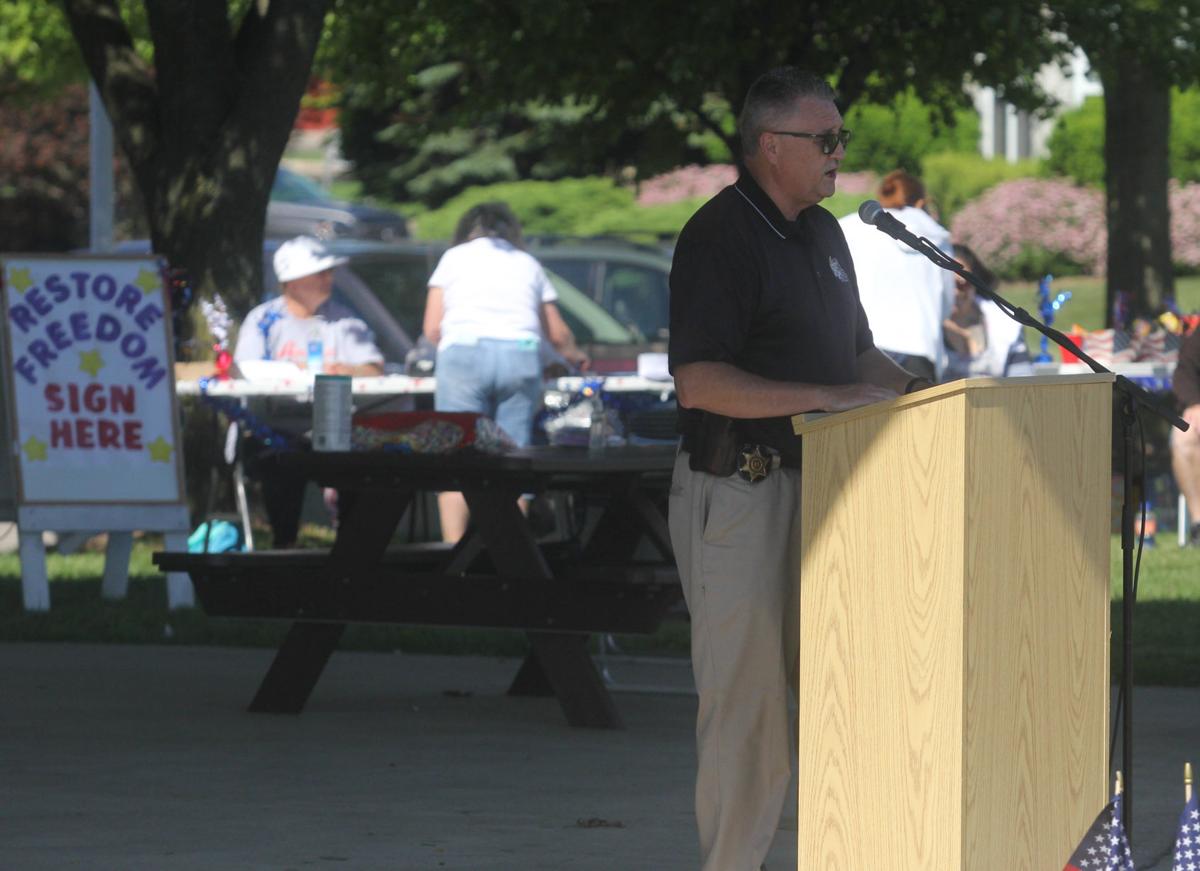 Kevin Skinner of Stand Up Michigan speaks during a Restore Freedom Initiative event Thursday evening at Waterfront Park in Ludington.

The Restore Michigan Initiative is a petition drive to amend the state constitution in a vast way, making changes to Articles I and III through VI. It makes significant changes to the general government and all three branches of government.

Skinner spoke for more than 40 minutes, part of which was an exchange with audience members who signed the petition and part of which were with a pair who questioned some of the changes proposed. His motivation to support the amendment was in response to the executive orders issued by Gov. Gretchen Whitmer.

“An executive order from a governor is not a law. It does not go through the proper process to become a law,” Skinner said. “Only legislature can write law. That’s something that a lot of citizens don’t know or understand, that an executive order is for the agencies under the executive branch. It is not for the citizens to consider it a law, even during an emergency.”

He outlined other changes such as the separation of powers. Skinner said there were some areas where one branch of government was using another branch’s power, and it creates those separations of powers.

Another change dealt with public health. Skinner read the amendment, and as he read, he was asked if it also covered abortion.

“I’m not here to debate whether that child’s body is its own or the parent’s, but maybe that’s for another day… This provision tells the government that they are not able to make a law or impose a restriction that is likely to impair.”

He related it to needing a vaccine, saying that the vaccine itself may impair a person’s health or safety. He also said wearing a mask could impair a person’s safety or health for wearing them over an extended period of time.

The proposed amendment also eliminates the civil rights commission. Skinner said the commission carries too much power to investigate and pass judgment on others, and its members are unelected.

He said eliminating that commission was the first of many that would be struck.

“We’re going to go after all of them that are unconstitutional,” he said. “Why not do them all now? Because it’s too much for people to swallow in one amendment.”

Cole said he needed to think quite a bit about whether or not to speak at the event, but decided to do so. Because he was told it wasn’t a political event, but rather a transparency event and a goal of bringing people from different perspectives politically together, he decided to speak.

He explained that there were only two sentences out of the more than 100 executive orders that troubled him.

“You started seeing a ripple in our state that was creating a problem between the Republican legislature and our governor. It became obvious to me through the correspondence I was receiving, this order wasn’t going away any time soon,” he said. “Myself and three other sheriffs decided to issue a statement. It came down to two sentences out of 133 executive orders. Two sentences that people stood up and lit their hair on fire that I questioned two sentences.”

Cole said he had people telling him that they wanted him die or they hoped he would die before the election.

“I saw an ugly side to our community. I’ve been here my whole life,” he said. “I was, I was, I was more sad than anything else at what I saw what our community was able to do and the depths they were able to go to.”

Cole said the governor is within her right to issue orders, and he said his job is to enforce the orders that apply while also being cognizant of a person’s constitutional rights.

He said later that he took issue with the portion of the executive order that stated: “All individuals currently living within the state are ordered to stay at home or at their place of residence… All public and private gatherings of any number people occurring among persons not part of a single household are prohibited.

“I have a problem with that. For me that’s what it came down to,” he said.

Cole cited a handful of examples, including the inability to play cards with his in-laws who live next door to not being able to help an elderly widow clean up her yard who lives a few doors down his road.

“My deciding to stand up to two sentences in 130-some orders is not political. Anybody who tells you that, didn’t read what I said… If it was political, I would have kept my mouth shut,” he said. “I made a stance seven days before the filing deadline (for those who sought his office). I was willing to risk it all for doing what I thought was right.”

In terms of the petition, Cole encouraged the audience to research it.

“I watched the video the other night of the drafter, and she said herself, ‘Read it. Understand it. If you’re not comfortable, don’t sign it.’ I’m not here to tell you to do. I’m telling you to do your homework.”

Cathy Ingraham, who has worked alongside Sharon Yearout to gather signatures, said the event went well from her perspective.

“I’m hoping everybody signs that came for this. To me, that’s what we’re hoping for,” Ingraham said.

She tried at the Ludington Farmers Market, and she may go to Country View Bakery. She wasn’t sure how many signatures and said it could be around 600 signatures.

Organizers need more than 500,000 signatures over the course of the next four days.