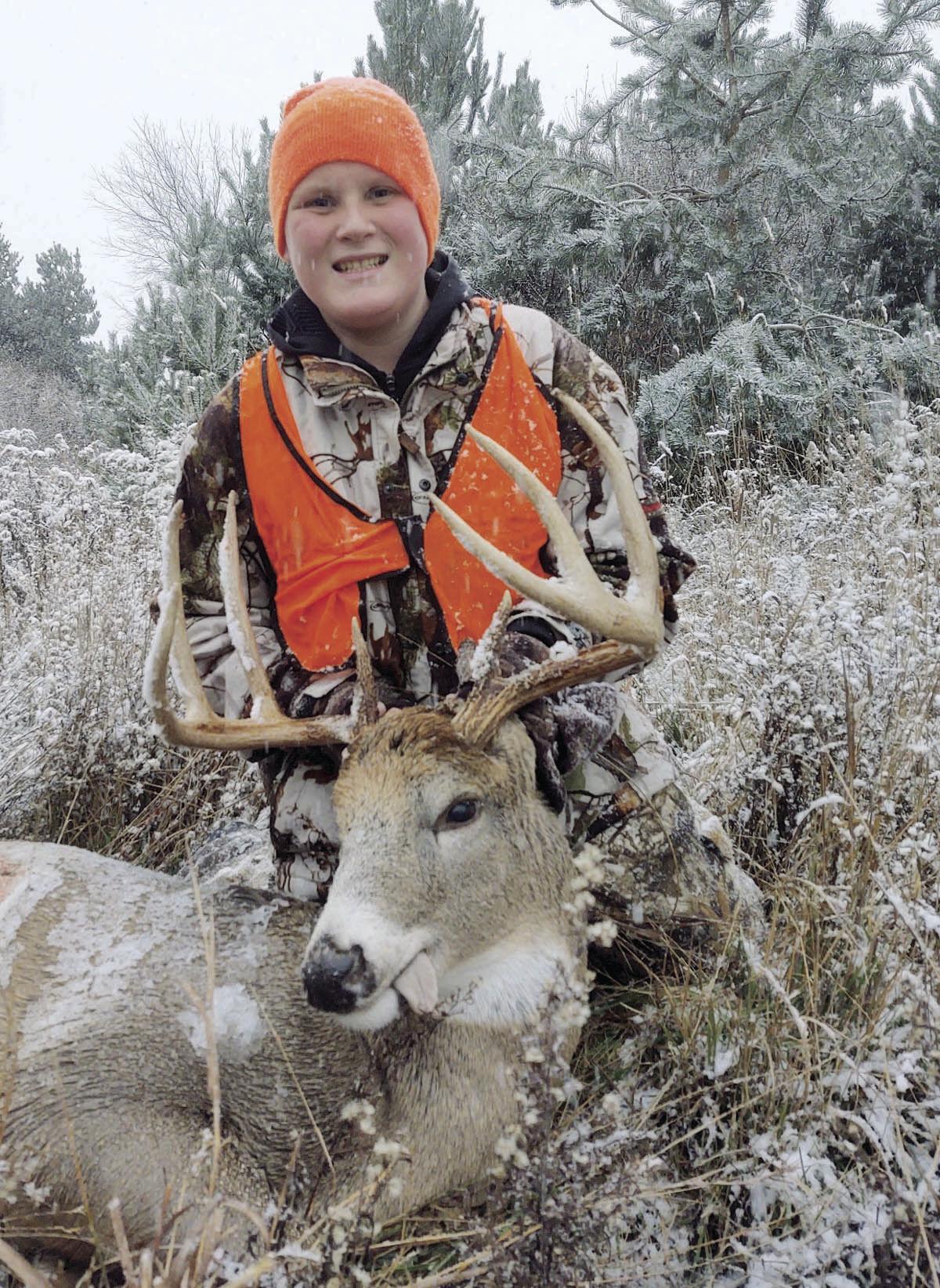 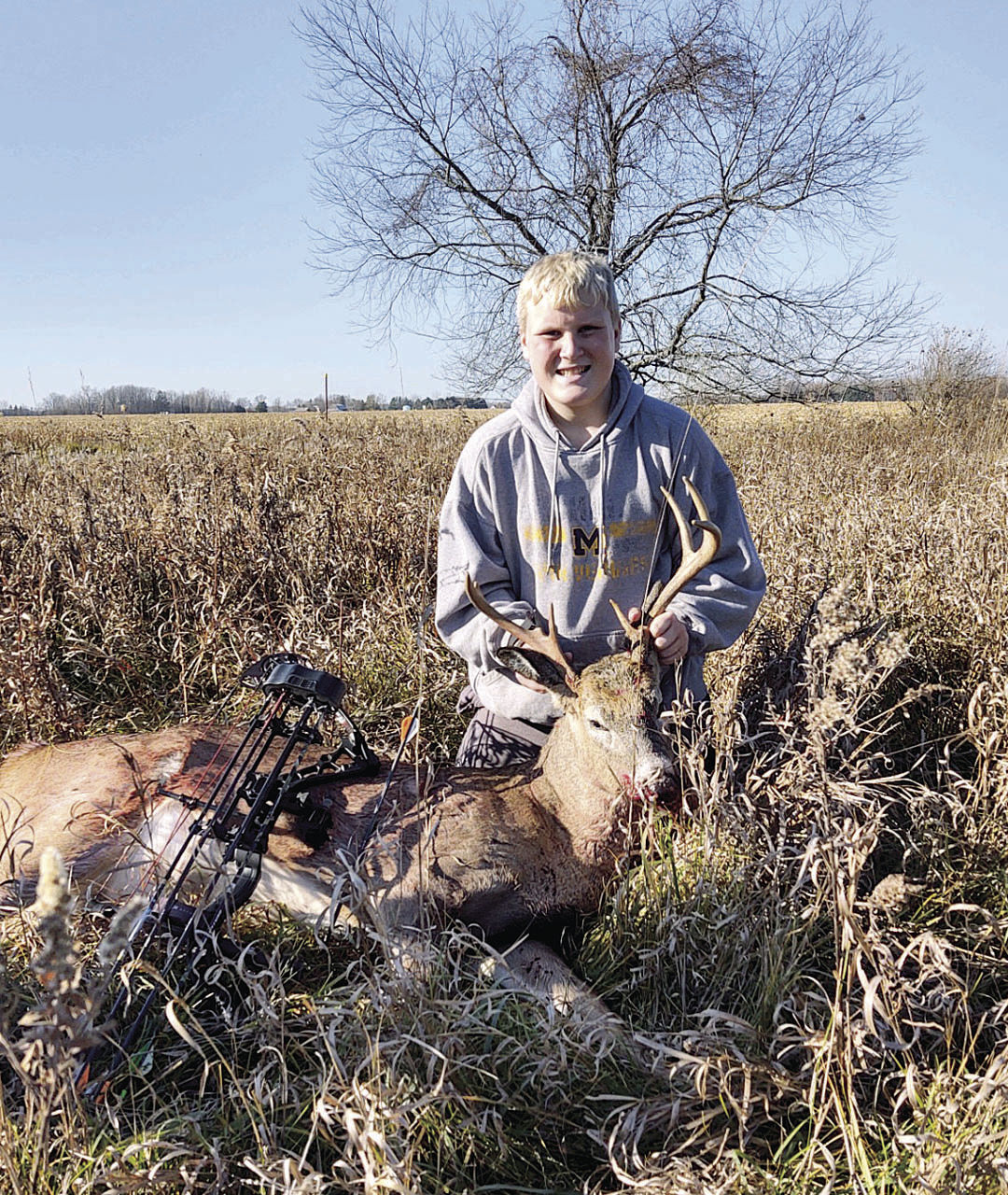 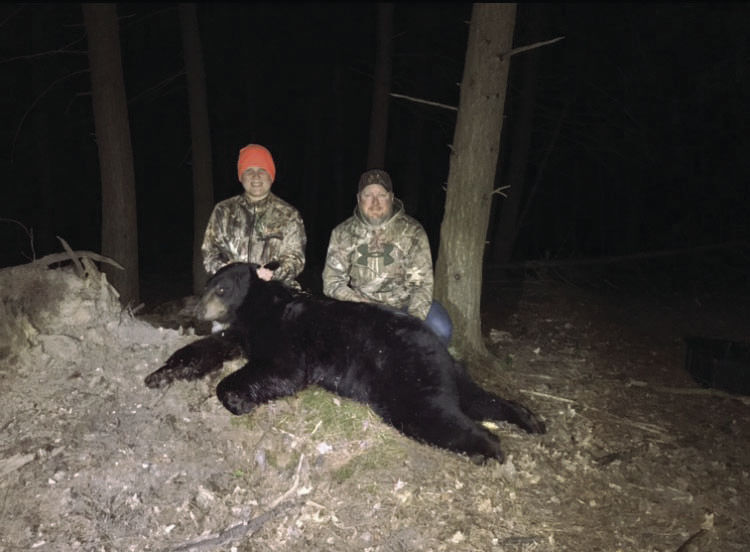 Some hunters dream of just filling a buck tag. Others look to improve on their personal best.

One Mason County Central student didn’t just fill his buck tag and his combo tag, he filled a bear tag as well — all in less than two months.

Kyle Peters, 12, had the kind of year most adult hunters can only dream of.

Kyle’s dad, Josh, said he earned it. Kyle has been hunting since he was five years old and loves hunting and fishing.

This year, Josh had enough points built up for a tag in the Baldwin bear management unit, of which Mason County is a part. But the law allows a hunter to donate his tag for a hunter aged 10-16 and Josh decided to do that for Kyle.

Many hunters who finally get a bear tag call in a guide or an outfitter to help them locate a bear, but Josh and his friends decided to do it themselves.

They baited the bear, as the law allows, with sweets and fats. In this case it was some bulk Kellogg’s Cereal, cherries and some cooking oil.

Kyle said they saw a bear the first night, but his rifle — actually a Remington Model 700 .30-06 that his dad has had since he was 18 — tinked the metal of the treestand as he tried to line up a shot. That bear spooked.

Kyle said he felt like the spot was so good that he was sure he’d shoot one right away, but he ended up having to wait.

Josh said they hunted every day but one between the Sunday opener and Friday and on Friday they finally got another chance.

When the bear came in at about 80 yards, this time Kyle quietly made the shot. He said he wasn’t shaking too badly as he made the shot.

“It was a female without cubs,” Josh said. “It dressed out at 275 (pounds). We figured the live weight was somewhere around 330. They do age them when you check them in, but we haven’t got the results yet.”

“He’s used it probably since he was eight,” Josh said.

The fact that Kyle had to miss school for a week while the rut was still hot was not unfortunate.

Josh said Kyle’s been bowhunting for a few years from ground blinds, but this year he graduated to hunting from tree stands. Josh said he put him about 100 yards away so he could keep an eye on him as they sat.

It was Nov. 8 and they were hunting private land in Sherman Township. They were after the bigger buck that Kyle ended up harvesting during rifle season.

While Kyle was getting ready for the big one, an eight-point walked in to 22 yards and Kyle let an arrow fly.

“He heard me draw back and he stopped in a weird spot, but I still had a shot on him,” Kyle said.

Within 20 minutes, Kyle had a shot at the big boy, but the harvest would have to wait until rifle season.

On Nov. 14, they got a picture of the big buck on a trail camera, so they knew he was still in the area they hunted.

“I had just been watching to my right,” Kyle said. “I saw this doe on my left and for fun I got it in my sights. I look up and he’s standing right there. I got the crosshairs on him and shot.”

Josh said the shot was at about 70 yards.

Kyle said the hunt was exciting.

Josh said the season was “a good dad moment.”

He said he could not have envisioned his son having the season he had.

“No, absolutely not,” Josh said. “Not everything put together — it was incredible. We knew that buck was in the area, and I put him on it.”

Still he said, to have it come together was unexpected and special.

“We saw him quite a few times and it was incredible,” Josh said.

How does he manage his son’s expectations going forward?

He’s got a doe tag — but he’s in no hurry to use it this week. The late archery season awaits.

“I wouldn’t shoot any with my gun,” he said.