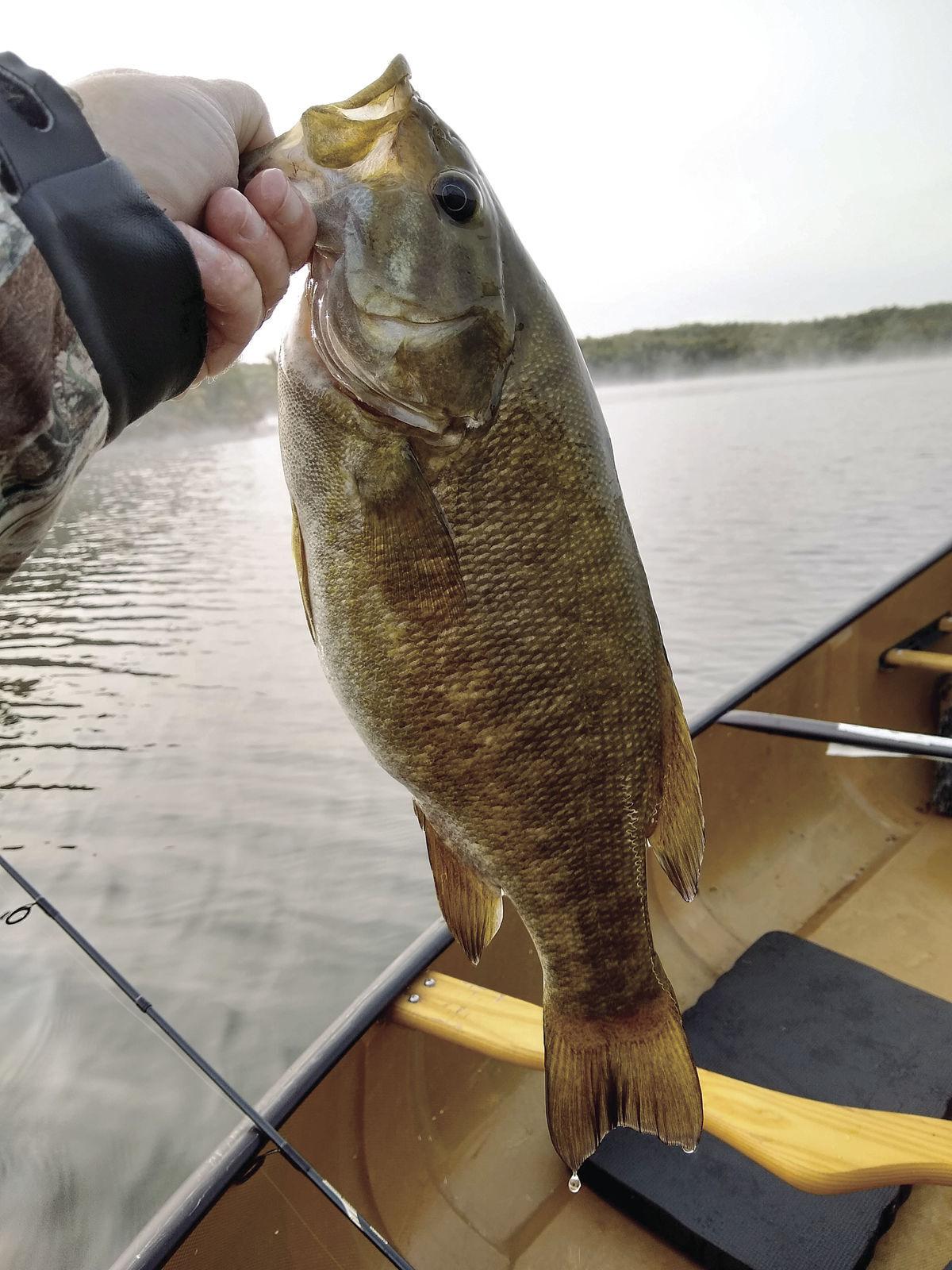 A nice smallmouth bass caught from a canoe in Ottawa Lake. 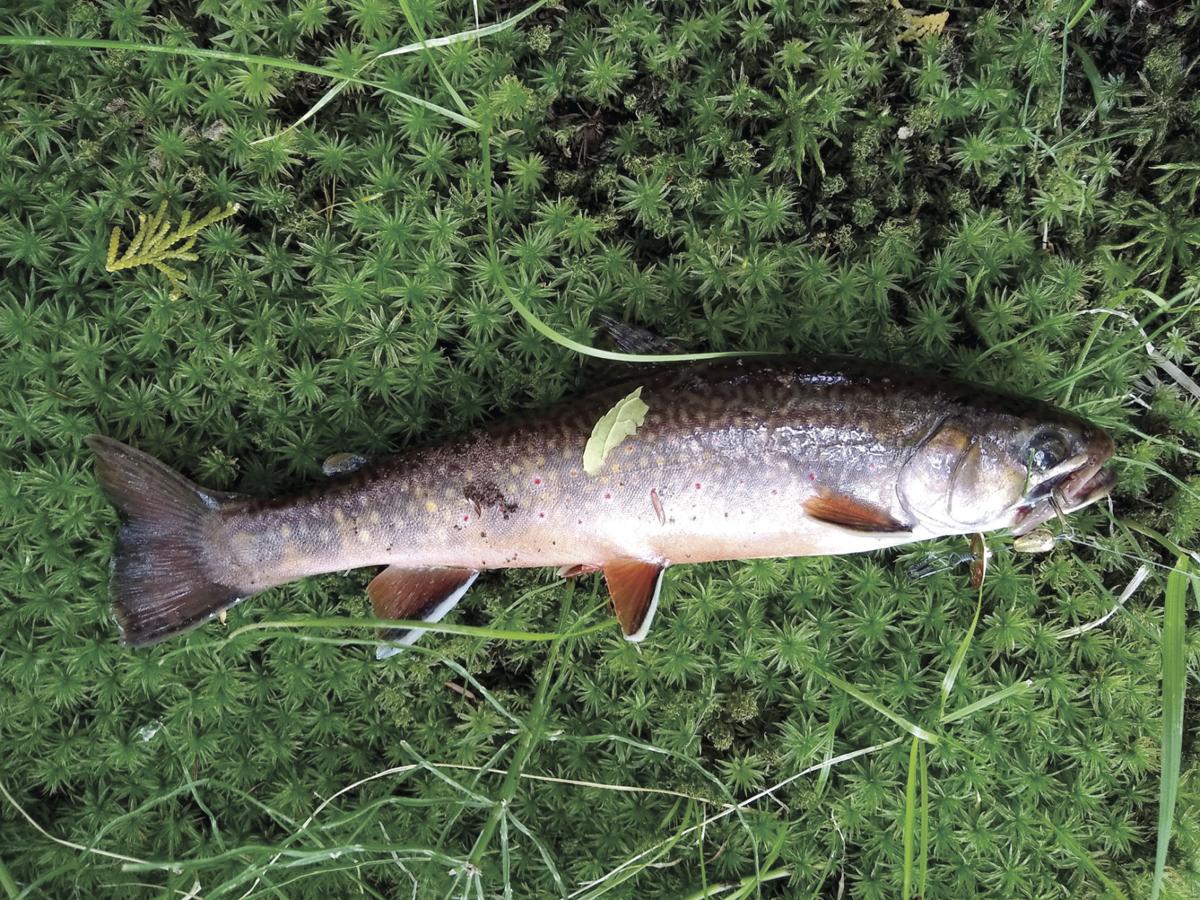 This brook trout was caught while on a trip to the Upper Peninsula.

A nice smallmouth bass caught from a canoe in Ottawa Lake.

This brook trout was caught while on a trip to the Upper Peninsula.

I’m always a little muskie-crazy when I head to the Upper Peninsula, but having caught a nice one (my second largest) from Hamlin on June 20, I was ready to widen my focus. Instead of targeting muskies, I would target all four of the species that I love in the U.P. — brook trout, smallmouth bass, walleyes and muskies. I called it my “U.P. slam.”

Holly and I again headed for the Iron River area, this time staying at Lac ‘O Seasons Resort on Stanley Lake.

Stanley Lake is kind of similar to Lower Hamlin with only about 5 percent of the weeds and many more rocks. It’s a clear lake with loons and two eagles nests on an island, a family of otters that lives there and good perch, crappie and walleye fishing. There are also some smallmouth bass and a few muskies.

The lake is just minutes from the Brule River and the Iron River, both of which are home to decent brook trout populations.

I was feeling confident that I would be able to accomplish my goal reasonably easily. Of course, confidence doesn’t always translate to success.

I launched the boat right away the day we arrived and decided to go out and cast for smallmouth bass around the “cribs.” Cribs are structures made of wood and cinder block that are dragged onto the ice with Department of Natural Resources approval to help with fish cover. They work well on lakes with no weeds or wood. However, rotting wood is an oxygen sink, so many biologists are opposed to them.

Stanley Lake was one lake where biologists approved adding the cribs. Basically, on the graph and in the pre-sinking photos I’ve seen, they were about like 5-cubic-foot apple crates and there’s a series of them. My friend Dock Stupp showed me how to find them without electronics and as long as that one cabin door is still there, I’ll always be able to find them. Side-imaging makes this even easier, though.

I was casting a white bass spinnerbait on my “tweener” rod. This is a rod I bought years ago when I was kind of thinking about muskies, but not really spending on true muskie rods. I have 50-pound superbraid on the reel, which will easily handle a 30-something-inch muskie.

As it turned out, I did find a smallmouth bass, but he was only about 12 inches long. I wasn’t concerned, as I regularly pick up decent bass wherever I fish with muskie lures.

But the need to find a bigger smallie gnawed at me, and I remembered Ottawa Lake just a few miles away. This is a lake that was infested with the rusty crawfish. This crawfish is a plant-killer. It scuttles around cutting down all the vegetation in a lake. They grow big, so they have few predators. Well, someone floated the idea of a five-year study on the lake to see what might happen if they put no-kill regulations on bass. It didn’t eradicate the crawfish, but the bass got quite large. I believe there’s another study and the no-kill regulations are still on the lake.

With my boat tied up in front of our cabin on Stanley Lake, I took the opportunity to visit Ottawa with my canoe. It was 42 degrees with light, variable winds. Well, the “variable” part was true, but the “light” part of the forecast was in error. I saw some giant bass. I mean giants. I swear the first two bass I saw were 20 inches long and then I saw some larger ones later. But the water was absolutely gin-clear. If I could see them to cast at them, they were gone the second the lure hit the water — sometimes before that. And they were cruising the shallows instead of relating to logs or boulders (and there were a lot of nice logs and boulders!). I’d get my canoe in close and the fish would bolt. Or I’d get in close and then the wind would push my shadow over them before I could get a cast off.

I finally settled for casting a tube jig with one rod and drifting with a drop-shot rig in the back of the boat. Sure enough, I hooked up with a solid 15-inch bass. I wanted to go back with the canoe again, but the wind never stopped blowing until the morning of our departure, and that day it was 26 degrees. I desperately want to return to that lake, possibly in the spring and definitely with my boat rather than a canoe.

I thought finding walleyes on Stanley might be challenging, but I was wrong. The combination of the time of year, the wind direction and some other recognizable patterns made walleyes the easiest species to catch. In fact, I caught one on my second cast of each of the first two spots I tried. Since it was getting down into the 40s, I called it a night. My secret weapon was a black Rapala Shadow Rap. The color is actually called “Carbon.” Why did I choose that color? Because black has the most solid silhouette at night. If you don’t believe me, go jump in the lake and put a handful of lures up over your head from under the water.

Ludington tops Manistee in the pool

The next time you’re night fishing, put something black in your trolling spread.

Brookies were my first U.P. love affair. My Aunt Dodo and Uncle Walter lived at 802 Cayuga Street in Iron River and the nearest bridge was on Seventh Street. I would ride my bike a block over and several blocks down and cast for brookies. My Uncle Walter told me there were no brookies in that stretch, but I ended up catching one on a yellow-and-red spotted Panther Martin spinner.

I had big plans for wading either the Iron or the Brule, but two inches of rain the first full day we were there made for unwadably high water levels. But we had fun looking for access sites. I can tell you that if you can’t find a deer, it’s probably because you’re not in Gaastra. I have never seen a town so overrun with deer. There was a fawn inside a fence that surrounded a playground and water tower. There was a shooter buck standing at the backstop of the softball field.

For the record, the most wadable access to the Brule is deep on the Wisconsin side of the river at the end of miles of gravel road. The most wadable access to the Iron River is in town between Seventh Street and U.S. 2. I tried wading some deeper water downstream of that and could never find a spot to safely get both legs in the water. It was to the wader tops at every spot I tried and I walked about 1.5 miles of river.

So, I turned our waterfall watching trip into a defacto fishing trip. Sandy Lovewell, the administrator at my office, had demanded we take the trip to the Bessemer/Ironwood area to visit the waterfalls on the Black River. My favorite of these was Gabbro Falls near BlackJack Ski Resort. It was here that I caught a 9-inch brook trout and lost one that was even larger. Both hit on a gold Panther Martin with red dots.

If you get the chance to visit the Black River Scenic Byway, I suggest you do it.

I saw muskies. Four of them, to be exact. But none were very aggressive in their follows and none were very large. I was OK with that. It was challenging fishing, what with the clear water and the ridiculous roller-coaster temperatures. I fished shallow with fast-moving lures and with slow-moving lures. I fished over the cribs. I fished the islands. I fished Dock’s favorite two weedbeds, but there were no takers.

The one thing I didn’t try was trolling at night, which was how we’d been successful before. But that was summer and this was definitely fall with the water temperatures right around 60 degrees. I guess if I had it to do over again (and I will!) I’d try lake-hopping a little for muskies, but also I would stick with spinners and just cover water and cover water and cover water. Sometimes the only way to catch a muskie is to find the only active one in the county.

In all, the trip was not disappointing. We got a much-needed mental break and we got to see so many deer. We saw no wolves or bears, but we did come across a fisher, also called a “fisher cat,” on M-73. They are truly neat creatures you can’t see in many places in the state. I had only previously seen one about 15 miles away on the Wisconsin side of the Brule River.

We also saw many, many eagles and one that was undeniably a golden eagle. The bald eagles on Stanley Lake were transporting large sticks to the second nest site while we were there as well.

We were treated to loon calls almost every day and I saw the otters twice during our stay.