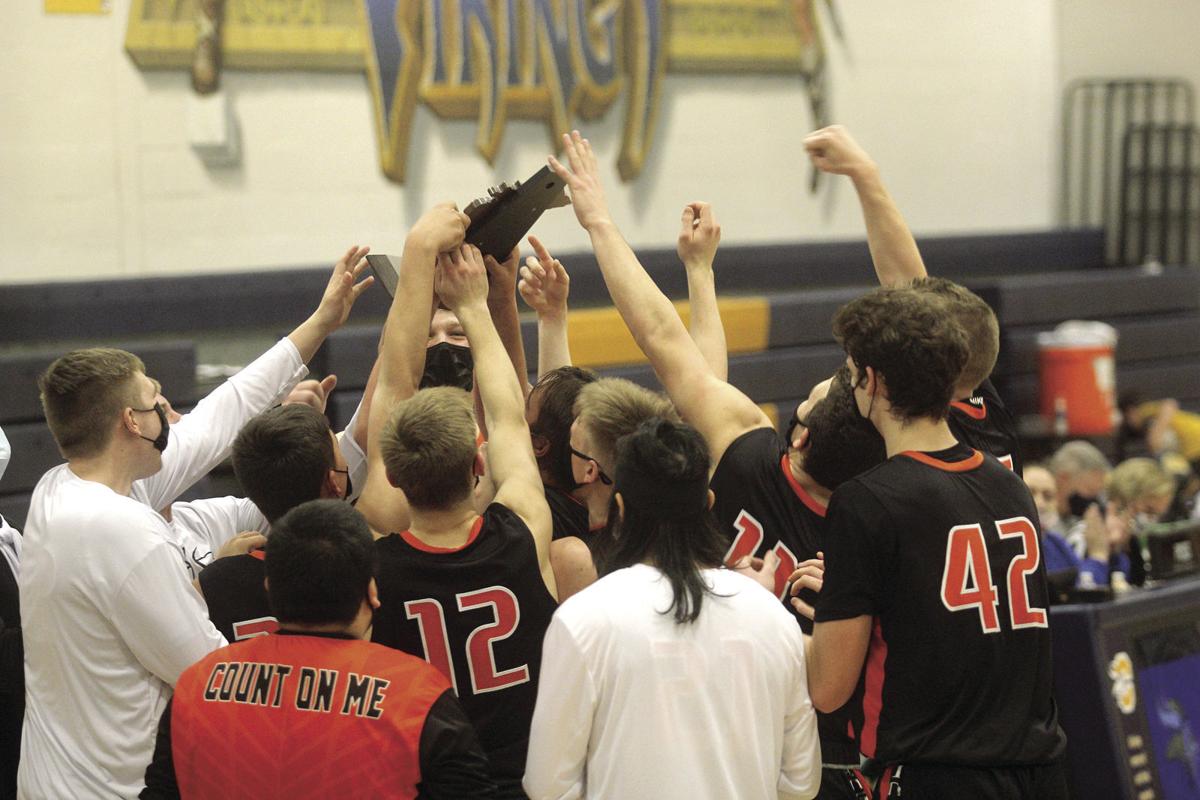 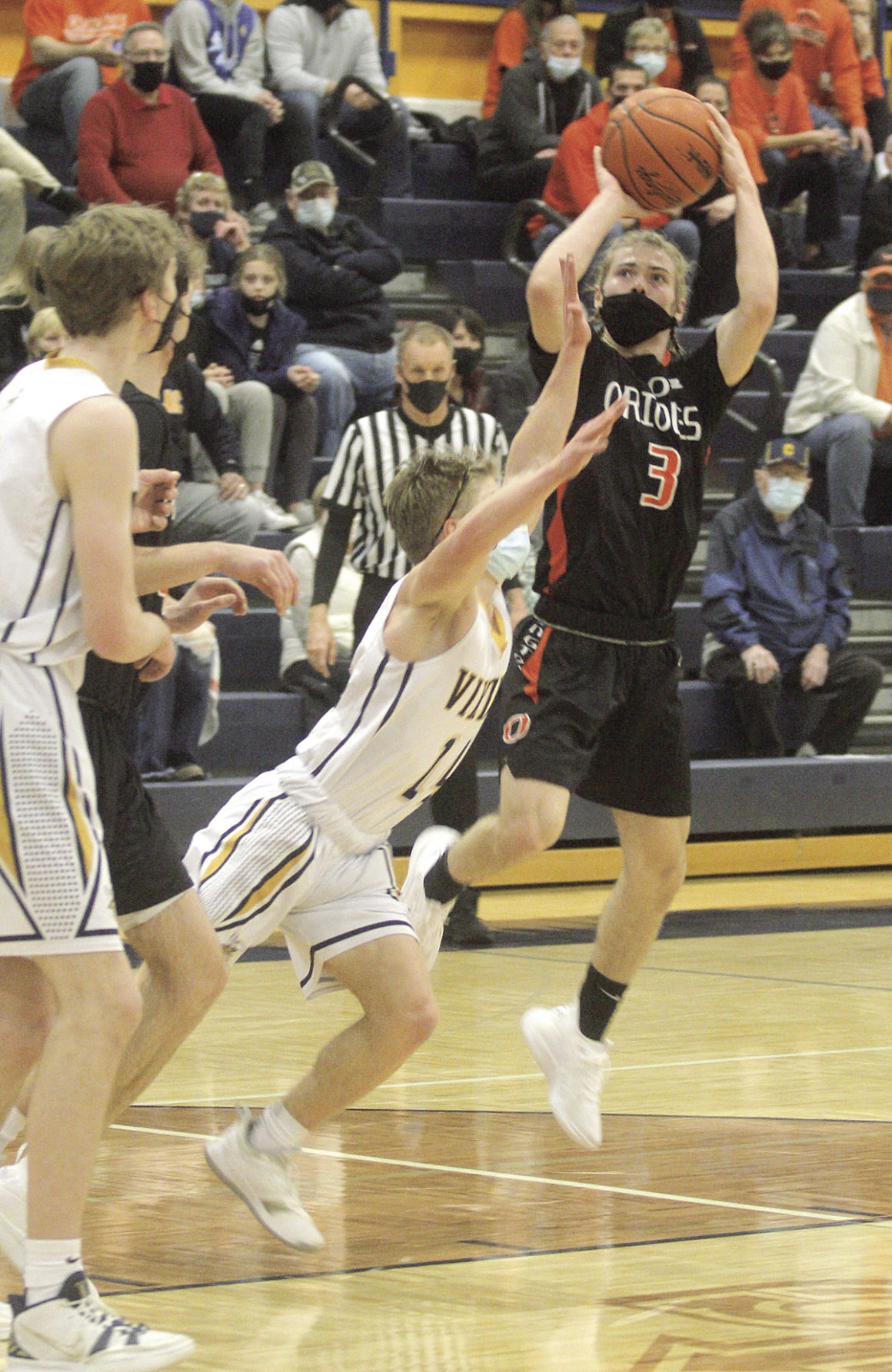 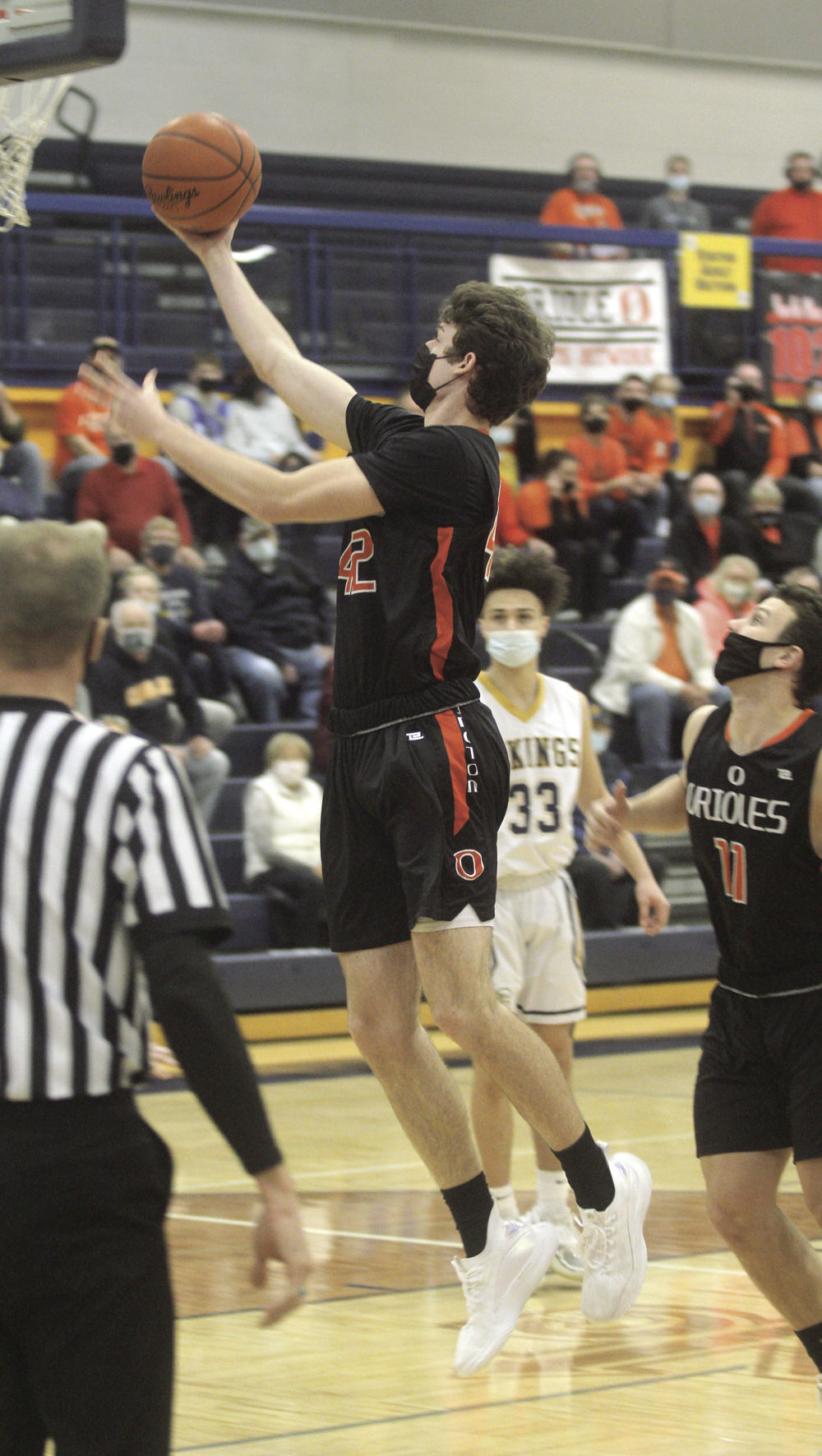 Ludington's Peyton LaCombe lifts up a shot against Cadillac during an MHSAA Division 2 district championship game Saturday in Cadillac. 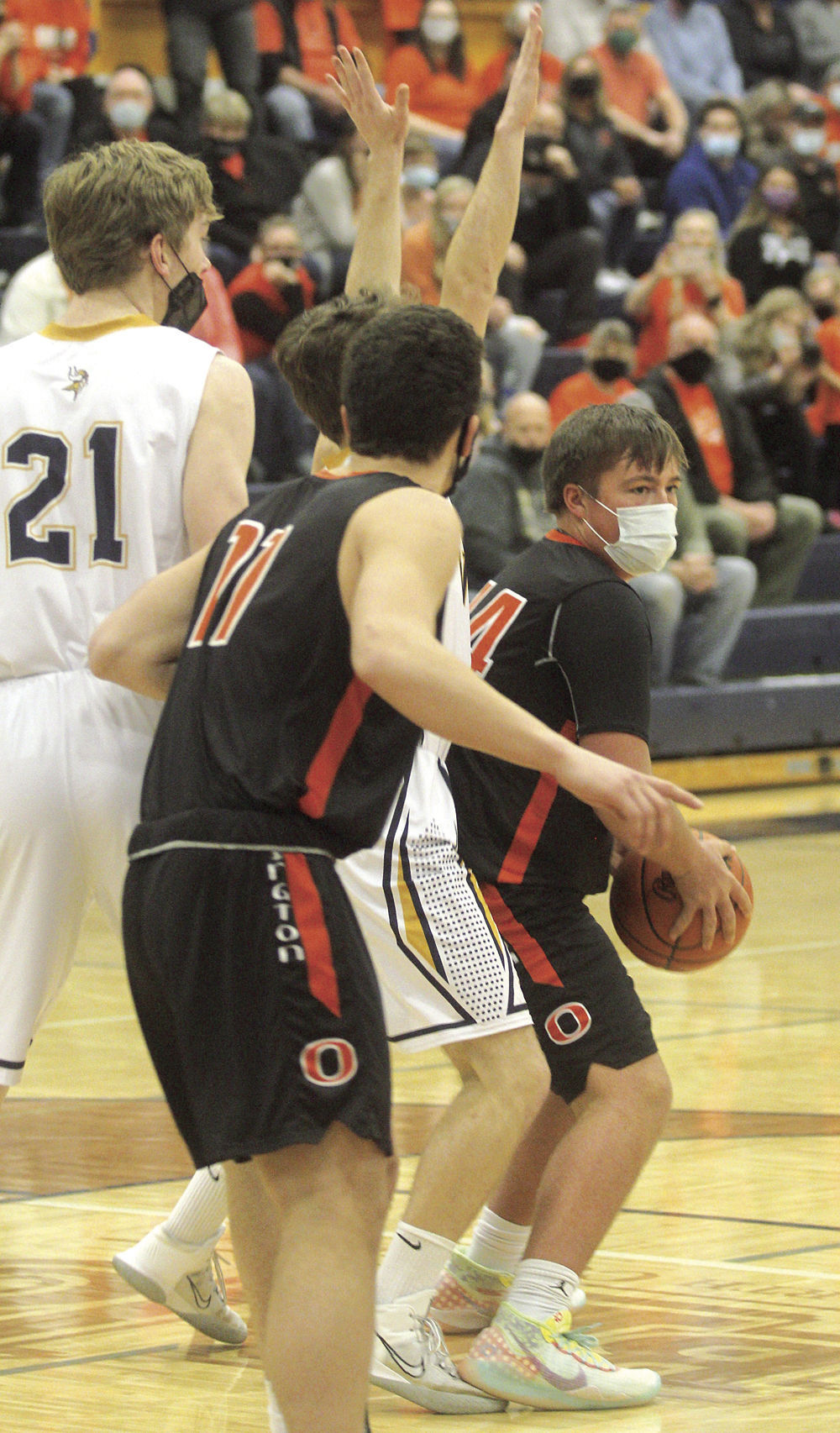 Ludington's Brad Mesyar looks to pass to a teammate out of the lane against Cadillac in an MHSAA Division 2 district championship game Saturday in Cadillac. 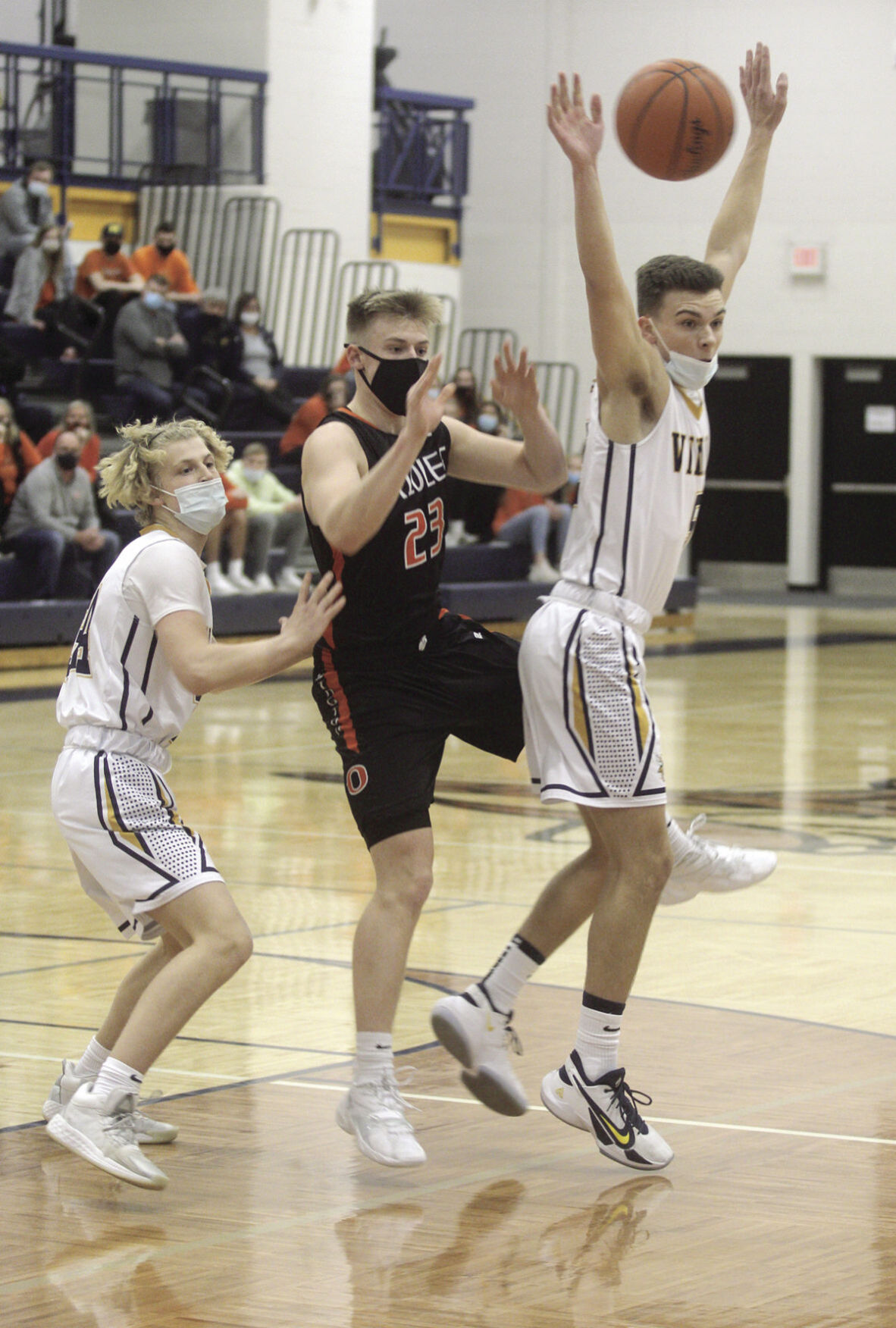 Ludington's Dylan Eaton fires a pass into the corner as Cadillac's Brady McLaurin and Evan Borr look on Saturday during an MHSAA Division 2 district championship in Cadillac. 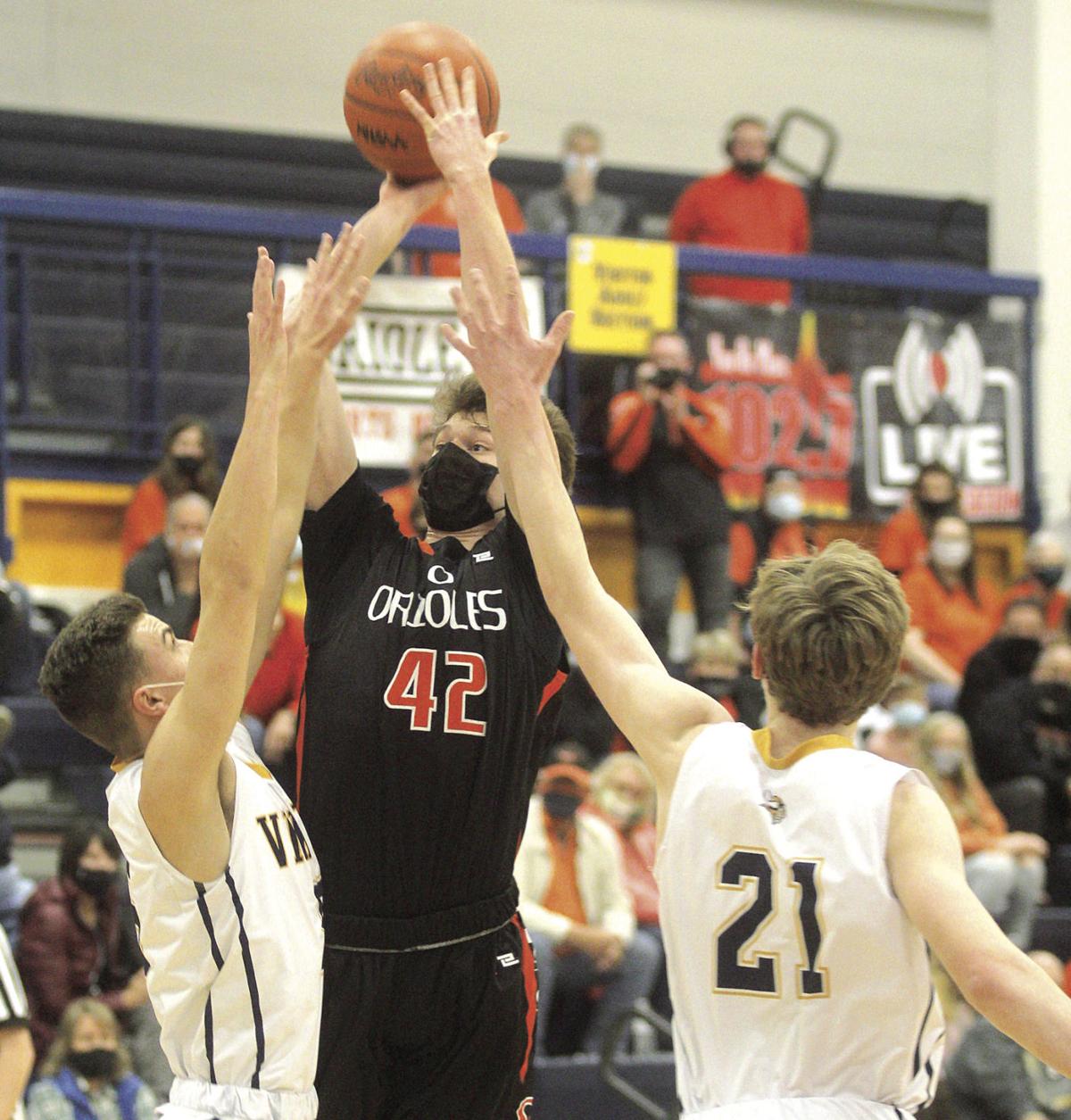 Ludington's Peyton LaCombe lifts up a shot against Cadillac during an MHSAA Division 2 district championship game Saturday in Cadillac.

Ludington's Brad Mesyar looks to pass to a teammate out of the lane against Cadillac in an MHSAA Division 2 district championship game Saturday in Cadillac.

Ludington's Dylan Eaton fires a pass into the corner as Cadillac's Brady McLaurin and Evan Borr look on Saturday during an MHSAA Division 2 district championship in Cadillac.

CADILLAC — Ludington’s boys basketball team had two options in-bounding the basketball in front of its bench in the waning seconds of its MHSAA Division 2 district championship game against Cadillac.

The ball could have gotten to Levi Laman or it could have gone to David Shillinger, said Orioles coach Thad Shank.

The ball went to Shillinger, and the with score tied at 35-35, he curled into the lane from the wing and fired up a shot against the Vikings on their home floor.

It was true with 1.2 seconds remaining.

And so are the Orioles as district champions.

“Super-proud of these guys, super-proud of them,” said Ludington coach Thad Shank. “It’s a been a whole team effort. This team has been more together as a team since the 2017 (state finalist) team. It hasn’t always been easy for us. We’ve got kids from multiple grades, and we’ve got kids filling roles they might not love, but they have really stayed together and fought and grinded.

“I could not be more proud.”

Ludington and Cadillac were supposed to play for the district championship in 2020 in their 33rd all-time playoff meeting since 1921-22, but everyone’s world was turned upside-down because of COVID-19 last year.

Saturday, the two teams duked it out, punch for counter-punch, with the Orioles coming out on top in an MHSAA Division 2 district championship game Saturday night in Cadillac, 37-35.

Turnovers and missed shots late allowed Ludington to overcome a eight-point lead with less than 3:30 remaining and pick up the victory. The one-two combo of Peyton LaCombe and Shillinger proved to too tough to stop in the lane on offense. The pair scored the final eight points of the game as Ludington wrapped up its 38th district championship on a 10-0 run.

Things were so tough for the Vikings that after a pair of timeouts just after Shillinger’s last-second shot, Cadillac’s long-bomb pass went into the rafters. It was yet another turnover, and it sent the Orioles’ faithful wild.

The two teams traded punches and counter-punches through the first half. Turnovers and missed shots against a tough, in-your-face defense — with Kyle Barnett flying this way and that to defend a Viking — allowed Ludington to get out to a five-point lead by halftime.

LaCombe led the way in early scoring for the Orioles as he had 10 of Ludington’s 21 first-half points, and he had eight of those in the first quarter. He finished with 17.

Jenema, a lean presence felt both in the interior and exterior, kept the Vikings in the game with 11 first-half points.

“In the first half, offensively, we got a lot of the shots we wanted,” Shank said. “We could have even a bigger lead than we did. I thought we executed really well.”

Cadillac looked to push the ball in the second half before Ludington could set up its menacing half-court defense. Jenema soared for a dunk and then hit a three-pointer from the top of the key to cut Ludington’s lead to two points, 23-21, with 4:32 remaining.

Cadillac’s Brady McLaurin sank a pair of free throws, and his corner three-pointer with 27.6 seconds left gave the Vikings their first lead since the first minutes of the first quarter. The Vikings took a 26-23 lead into the fourth quarter.

Ludington’s scoring drought lasted nearly eight minutes of clock time. LaCombe split a pair of free throws to break the spell after a Jenema dunk, and Shillinger split a pair to pull Ludington back to within three points, 28-25, with 6:23 remaining.

Jenema, though, hit a shot in the lane and completed a three-point play for a six-point Cadillac lead, the Vikings biggest of the game at that point.

“Cadillac locked us down for about a quarter and a half,” Shank said.

Shillinger answered on a drive to the basket, but Jenema was fouled on the ensuing Cadillac possession, putting the Vikings into the bonus. He scored both free throws, keeping the distance at six points. But those were the final two of his team-high 23 points.

A turnover by Ludington allowed Cadillac to run the clock down with the two-possession lead. Cadillac’s Jaden Montague capped the long possession with a shot from the baseline, extending the Vikings’ lead to eight.

Ludington’s Dylan Eaton sank a pair of free throws, and the Orioles’ defense went on the attack against the Vikings’ guards. Cadillac was forced to use a timeout to prevent a 10-second violation with 2:54 remaining.

“We haven’t played a lot of man-to-man defense, but we were kind of forced to do it in that situation,” Shank said. “We spend a lot of time on trapping and scrambling. That time, it paid off. It’s hard to play with a lead in basketball. They lost a little bit of their aggressiveness on their end on offense, trying to milk the clock a little, and when you get into that situation, it gives people the chance to get momentum.”

Ludington forced a turnover, and LaCombe scored on a move to the basket, cutting the Cadillac lead to four points. Jenema missed on the front end of a one-and-one situation, and LaCombe scored again on a tough basket in the lane to make it 35-33 in Cadillac’s favor.

Cadillac turned the ball over again under its basket, giving Ludington a shot at tying the game or taking the lead with less than a minute to play. Shillinger was fouled on his way to the basket with 40.2 seconds remaining, and he sank them both to knot the game at 35-all.

Ludington continued to enjoy miscues by the Vikings, and the Orioles made Cadillac pay.

On an in-bounds pay in front of the Ludington bench, the ball got to Shillinger who dribbled into the lane and scored a tough shot to give the Orioles the victory. It wrapped up a 12-point night for the freshman.

“In that situation to run anything, it’s not going to work. It reminded me of the regional game in Petoskey when Gabe Rivera hit the baseline. It was the same play,” Shank said. “It was mirror images. Little jump shot from 12 feet out.”

The mirror image gave the Orioles their 21st victory in 33 playoff meetings and it was victory No. 93 in 158 all-time meetings between the schools. Ludington has played only Manistee more times in boys basketball.

The Orioles advanced to Tuesday’s regional semifinal against the winner of the Standish-Sterling district, West Branch Ogemaw Heights. The Owls defeated their one-time league rivals, Standish-Sterling, 65-52. The game is scheduled for 5:30 p.m. at Traverse City Central.

This will be Ludington’s first-ever game with Ogemaw Heights. It played two previous times against West Branch High before districts consolidated there for 1968-69.

Saturday’s victory also marked the first time since 2007-08 when both the boys and girls programs at Ludington won a district championship — the first season that girls basketball was played in the winter after traditionally being in the fall. Ludington’s girls play Standish-Sterling at 5:30 p.m. Monday in Houghton Lake.

Of these, who is your favorite scary character?