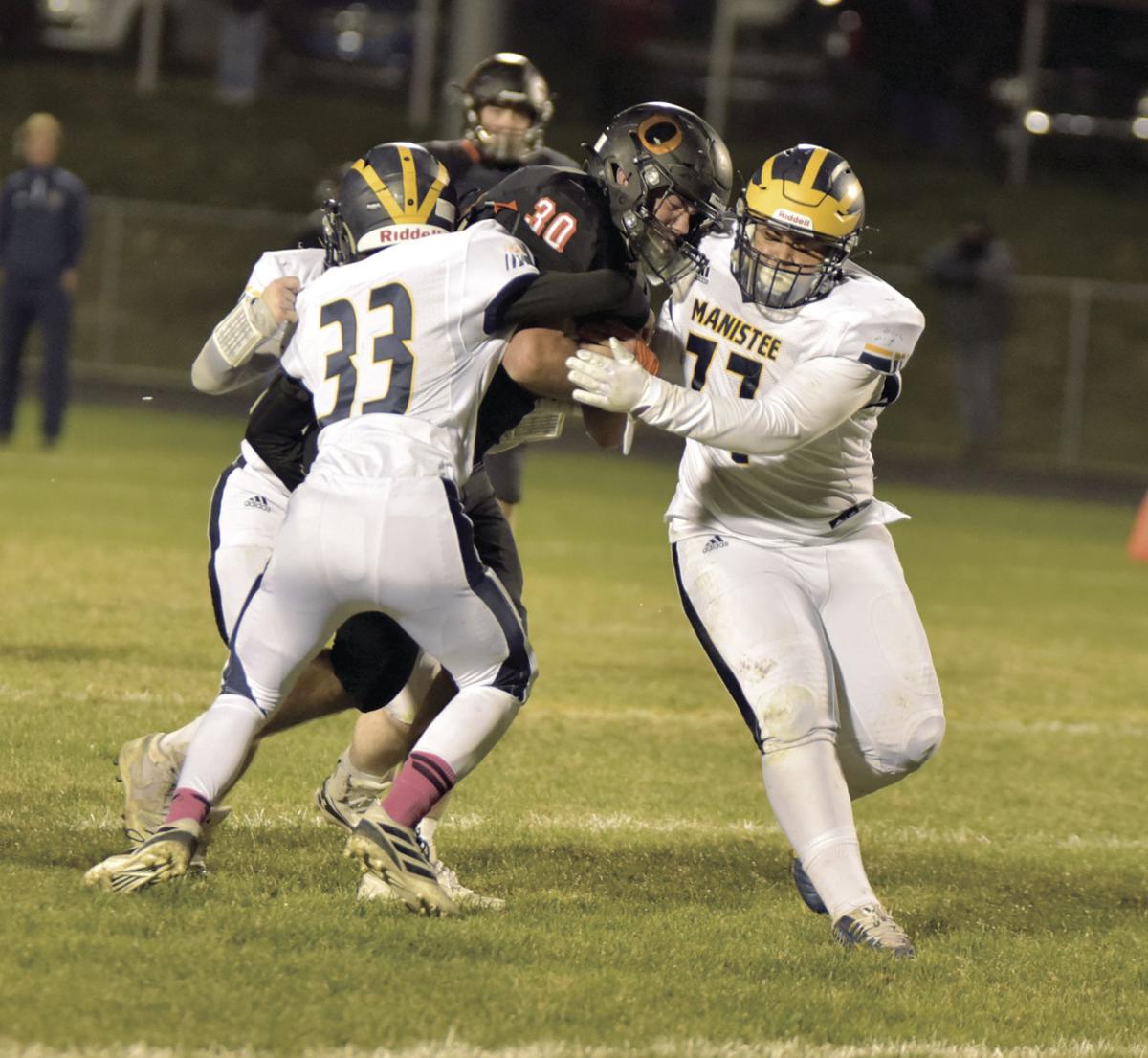 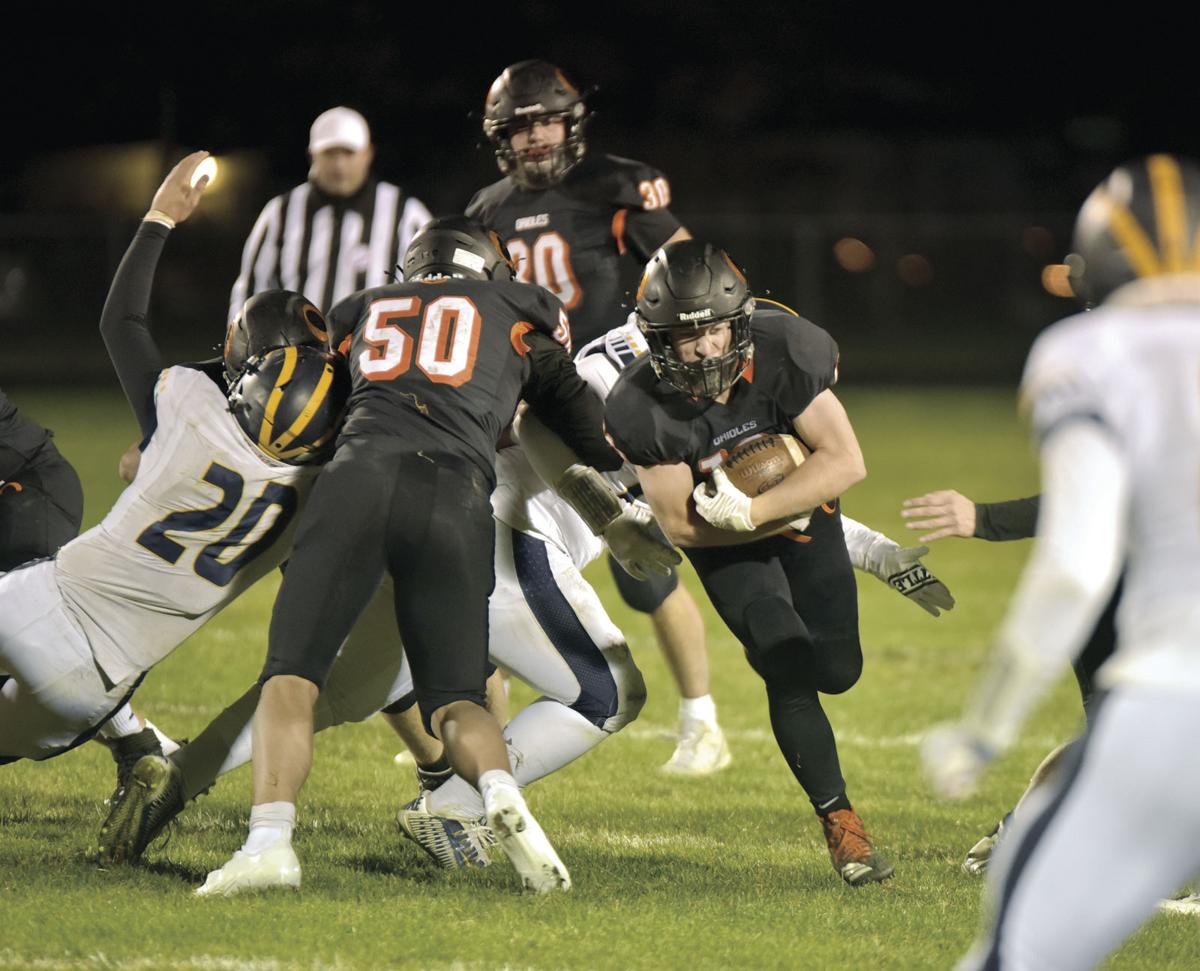 Ludington’s Stephen Weinert carries the ball against Manistee during Friday’s game at Oriole Field in Ludington.

Ludington’s Stephen Weinert carries the ball against Manistee during Friday’s game at Oriole Field in Ludington.

With the second longest football rivalry in the state of Michigan, you’re bound to get some thrillers when Ludington and Manistee meet on the gridiron.

That’s exactly what took place Friday night at Ludington’s Oriole field, where the Chippewas took the game with a final second stop on a two-point conversion, topping the Orioles 21-20.

“With how well our guys up front were moving them back on the line, I really wish we could’ve put some more points on the board. I’m really proud of the way the guys fought all night long,” he said.

However, the Chippewas continued a three-year trend of the visitor taking the Dad’s Trophy back with them to their home. Ludington owns a 14-13 edge in the trophy game that dates back to 1987, and the Orioles have a 70-62-11 edge in the all-time series that dates to 1895.

“It was a heck of a ball game. The kids out there defensively held up at the end. They turned them over, I think four times throughout the game. Ultimately, that’s probably the difference,” said Manistee coach Troy Bytwork.

“We had a lot of wind blowing from the south, so it limited both teams a little bit as far as throwing the ball. Offensively, we did just enough. Our defense really came through when necessary against a very good offensive club.”

The first Oriole drive was a productive one, highlighted by a 36-yard run by Jake Plamondon out of the wildcat formation to get the Orioles into the red zone.

Plamondon ended the drive with an 11-yard touchdown run to give the Orioles an early 7-0 lead.

Ludington had yet another solid drive going on the ground, where they got the ball all the way down to the Manistee 16-yard line.

A Brad Mesyar pass intended for Jacob Irelan was picked off by Chippewas Jeffery Huber in the endzone, ending the Orioles’ drive.

On the ensuing drive, Huber connected with Brady Mikula for a 69-yard completion on the third play of the drive to set up a five-yard touchdown run by Landen Powers to knot the game up at seven late in the first quarter.

After a nearly seven and a half minute drive that brought the Orioles down to the Manistee 5-yard line, Plamondon took the snap and ran to the left where he was met by a couple of Chippewas that popped the ball loose into the end-zone, as Huber hopped on the ball to give possession back to Manistee midway through the second quarter.

After swapping a pair of three-and-outs, the Chippewas got the ball back with just under four minutes to play.

With 12 seconds left in the half, Huber connected with Connor Rischel on a 35-yard touchdown pass to give Manistee its first lead of the ballgame at 14-7 as they headed into the halftime break.

Manistee started the half with the ball and didn’t give away any of the momentum they took from the first half.

A nearly six minute drive, it was capped off by a 10-yard touchdown pass from Huber to Rischel on a fourth-and-10, to make it a 14-point game in the third quarter, 21-7.

A penalty-riddled drive by the Chippewas defense — including a pass interference and unsportsmanlike conduct — allowed the Orioles to move downfield. It helped fuel a touchdown drive capped off by another 11-yard touchdown run by Plamondon, cutting the Chippewas’ lead to 21-14.

After a three-and-out forced by the Orioles defense, the offense took over with just under three minutes left in the third quarter looking to even the score.

With Plamondon under center, he and Stephen Weinert did all the work for the Orioles on the ground on the drive, getting all the way down to the Chippewas 2 yard line.

On fourth-and-1 from the 2, Plamondon took the snap but was immediately met by Conor Beaudrie in the backfield, as the Chippewas stopped the Orioles once again inside the 5 yard line.

Another three-and-out was forced by the Orioles’ defense, giving the offense another chance to tie the game up before the end of regulation.

On a third-and-8, Mesyar tried to connect with Jake Plamondon, but the pass was picked off by the Chippewas’ Beaudrie, setting up a drive to seal the game for Manistee at their own 25.

Yet another three-and-out forced by the Orioles gave the ball back to their offense with 1:35 to play to tie up the ball game.

On the first play of the drive, Mesyar found Kyle Barnett for 36 yards and again for 14 yards on the next play, flipping the field quickly and putting the Orioles at the Chippewas’ 16 yard line with under a minute to play.

On a first-and-goal from the 6 yard line, following a fourth-and-6 conversion on a Mesyar-to-Jacob Irelan connection, Mesyar found Barnett once again for a touchdown to make it a 21-20 Chippewa lead.

Gunsell decided to go for two, and with Plamondon behind center, Plamondon attempted a jump pass to Stephen Weinert that was picked off by Keith Barke, to close out the game with a Manistee victory.

“When we scored that final touchdown, I thought we were going to win a game we probably shouldn’t have,” said Gunsell. “Sometimes coaches we outcoach ourselves, and why I didn’t have the ball in Plamondon’s hands for a sweep I’ll never know.”

“Something about this game on a Friday, even when people are limited to just a few tickets and all that, it still had that feel. Which is amazing. It was what we needed,” Bytwork said.

“All week long there were a number of things I stressed, and one of them was I told the kids we had to just play further into the whistle. The kids just stepped up and played exceptionally well.”

Plamondon led the Orioles on the ground with 21 carries for 152 yards and two scores, while Weinert added 19 carries for 98 yards.

Irelan led all Oriole receivers with seven catches for 56 yards with Mesyar completing 11 passes for 111 yards.

The Chippewas were led on the ground by Landen Powers with 17 carries for 67 yards and a touchdown.

The loss drops the Orioles to 3-2 on the year and 1-2 in conference play, with Manistee improving to 4-1 on the season and 2-1 in Lakes 8 action.