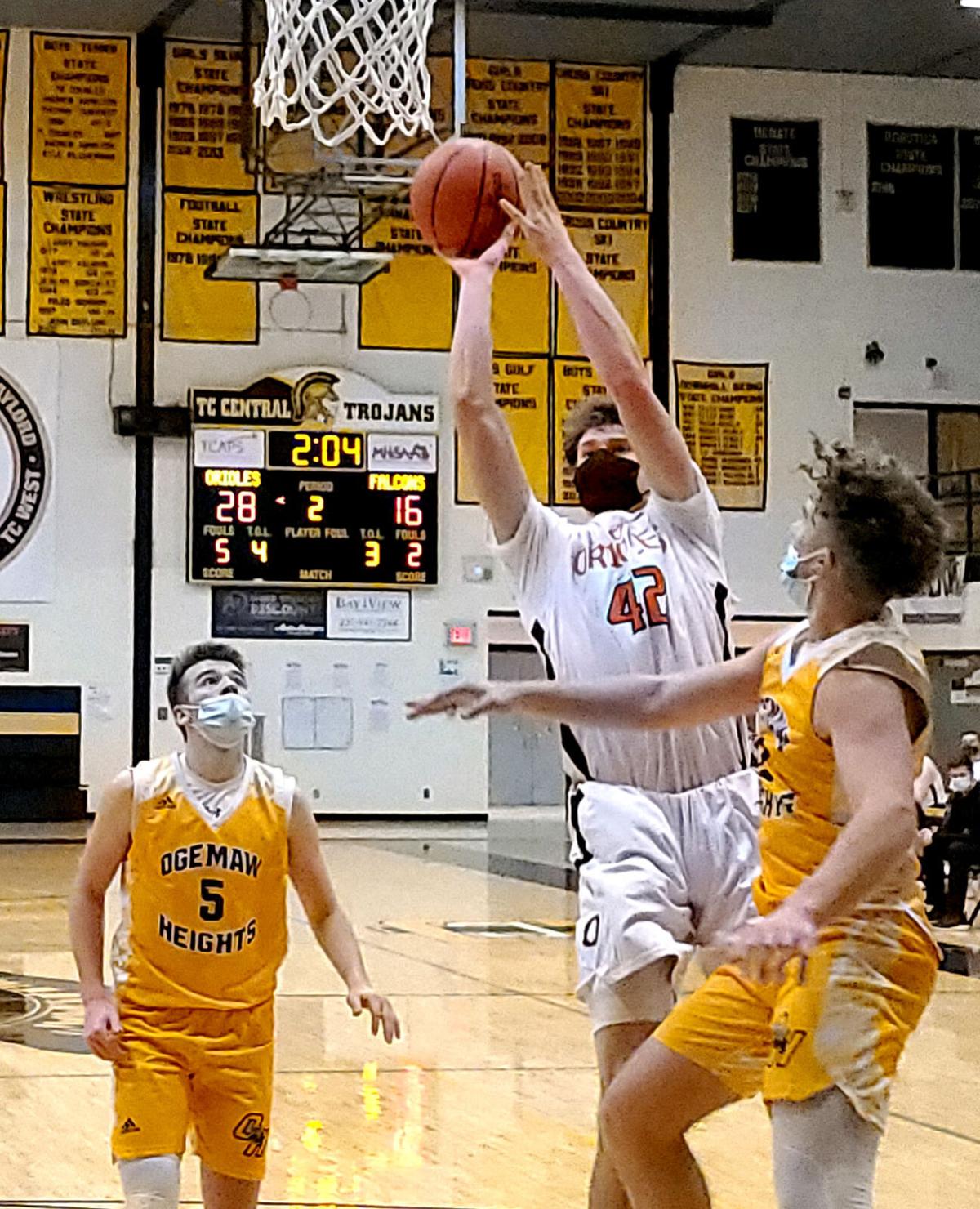 Ludington’s Peyton LaCombe gets off a shot in the paint during Tuesday’s regional semifinal game played in Traverse City. 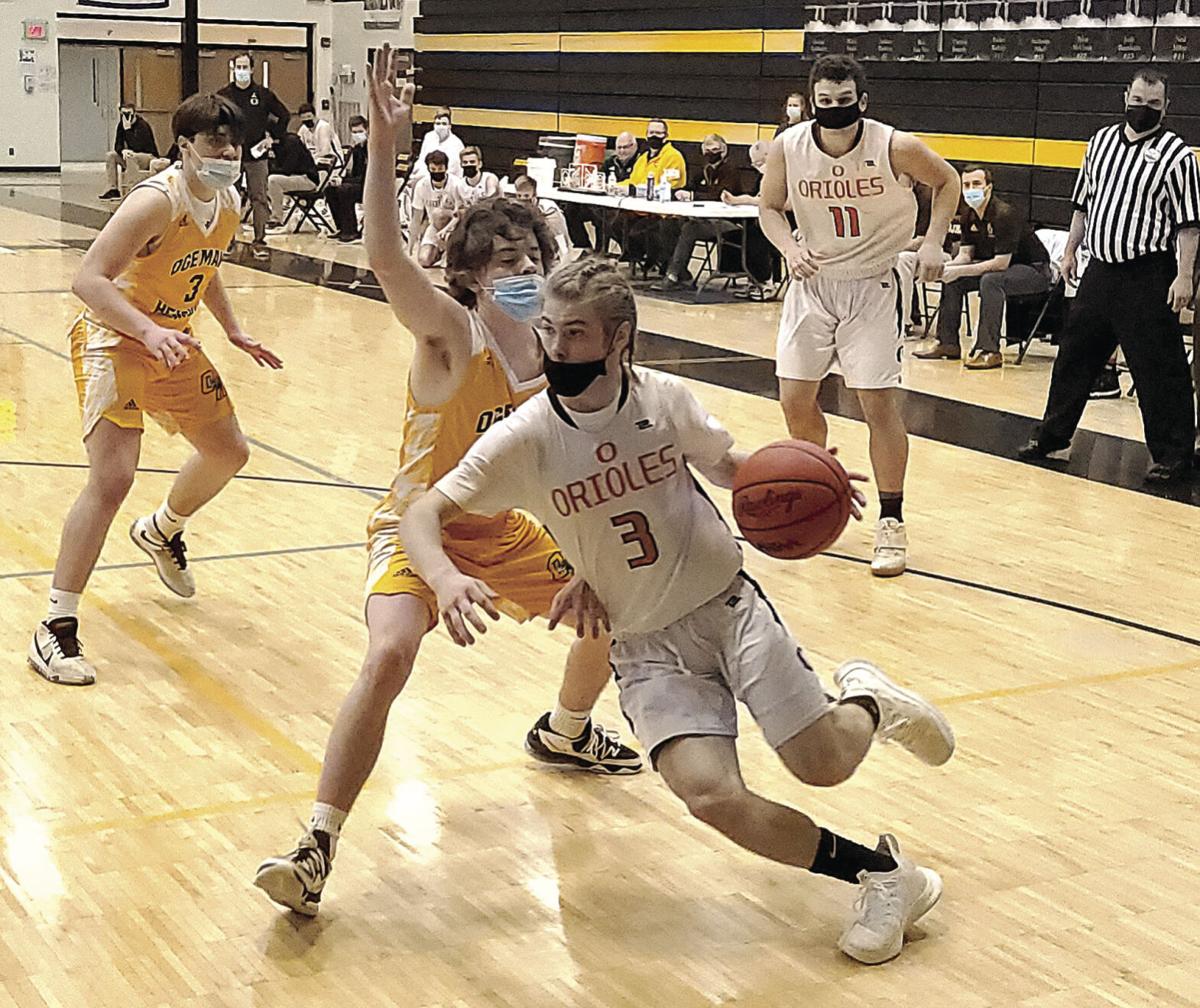 Ludington’s Peyton LaCombe gets off a shot in the paint during Tuesday’s regional semifinal game played in Traverse City.

TRAVERSE CITY — In March, you want to be able to trust your team to figure itself out on its own on the court.

After falling down 10 early in the first, Ludington coach Thad Shank opted not to call a timeout and see what his boys could do.

What they did was erupt for a 23-0 run that spanned into the second quarter, as they never lost the lead from that point on, advancing to an MHSAA Division 2 regional final Thursday night after topping West Branch Ogemaw Heights, 67-49, at Traverse City Central.

“I thought we were the better basketball team, so I didn’t get too nervous,” said Shank. “At the same time, you have to play through situations like that. If you’re relying on your coach every second, you’re probably not going to be very effective. Hats off to our guys, they really flipped a switch there after going down early.”

While it’s normally the Orioles giving fits to the opposing offense, it was the Falcons imposing their will early on the defensive end, leaving Ludington scoreless the first three minutes of the game.

Ludington’s defense was still stout, holding Ogemaw Heights to five points in the first four minutes of the quarter as the Falcons clung to a 5-2 lead.

Peyton LaCombe led a 4-0 charge to end the quarter for the Orioles, cutting the Falcons’ lead to six as Ludington trailed, 15-9, after one quarter of play.

Ludington’s defense was much more active to start the second quarter, wreaking havoc on the Ogemaw Heights guards, coming away with two steals in the opening two minutes as the Orioles erased the Falcon lead, knotting up the game at 15 each.

The Orioles (13-5) showed no signs of slowing down after their 10-0 run, adding 10 more points to the run with threes from David Shillinger as well as a layup and alley-oop dunk for LaCombe from Shillinger that gave Ludington its first lead of the game at 25-15, leading to a Falcons timeout.

A free throw from Falcons Hudson Hodgins gave Ogemaw Heights its first points since the three-minute mark of the first quarter, ending a 23-0 Oriole run.

While it wasn’t as dominant of a run from the Orioles, a 7-4 advantage in the final 3:10 of the second quarter gave Ludington a 15-point lead at the half, holding a 35-20 lead at the half.

The Falcons came out strong offensively in the third, racking up six points in the first two minutes, but the Orioles were stronger, putting up nine of their own to stretch out their lead to 18 with 5:09 to play in the quarter.

Ludington slowed down their offense a bit in the middle goings of the third as they were still able to gain on its lead, getting its advantage up to 21 with 1:58 to play in the quarter.

Ogemaw Heights (11-4) closed down the stretch with the only points in the final two minutes, a three from the corner to lower the Ludington advantage to 18 as the two teams would head into the fourth with the Orioles leading 52-34.

The Falcons once again came out hot to start the quarter, this time neutralizing the Oriole offense to go on a 7-2 run, cutting the Ludington lead down to 13 with 5:19 to play in regulation.

With Ogemaw Heights chipping away, the Orioles came out of a timeout more displaced on both ends of the floor to keep the game at a 13-point advantage, with each team noticing four points in a three-minute span.

Ludington was able to control the final minutes of the game, stretch out its lead even further and clinch a spot for a chance at its third regional championship in six seasons. In doing so, the Orioles notched a victory over a team it had not played before in the Falcons.

LaCombe and Shillinger led the Orioles with 17 and 16 points each while Levi Laman, Kyle Barnett and Dylan Eaton each added seven points.

Hodgins was the high scorer in the game with 23 points.

Ludington will face Escanaba (16-2) in the regional championship at 6 p.m. Thursday back at Traverse City Central. Escanaba defeated Boyne City, 59-56, in the other regional semifinal played at Escanaba.