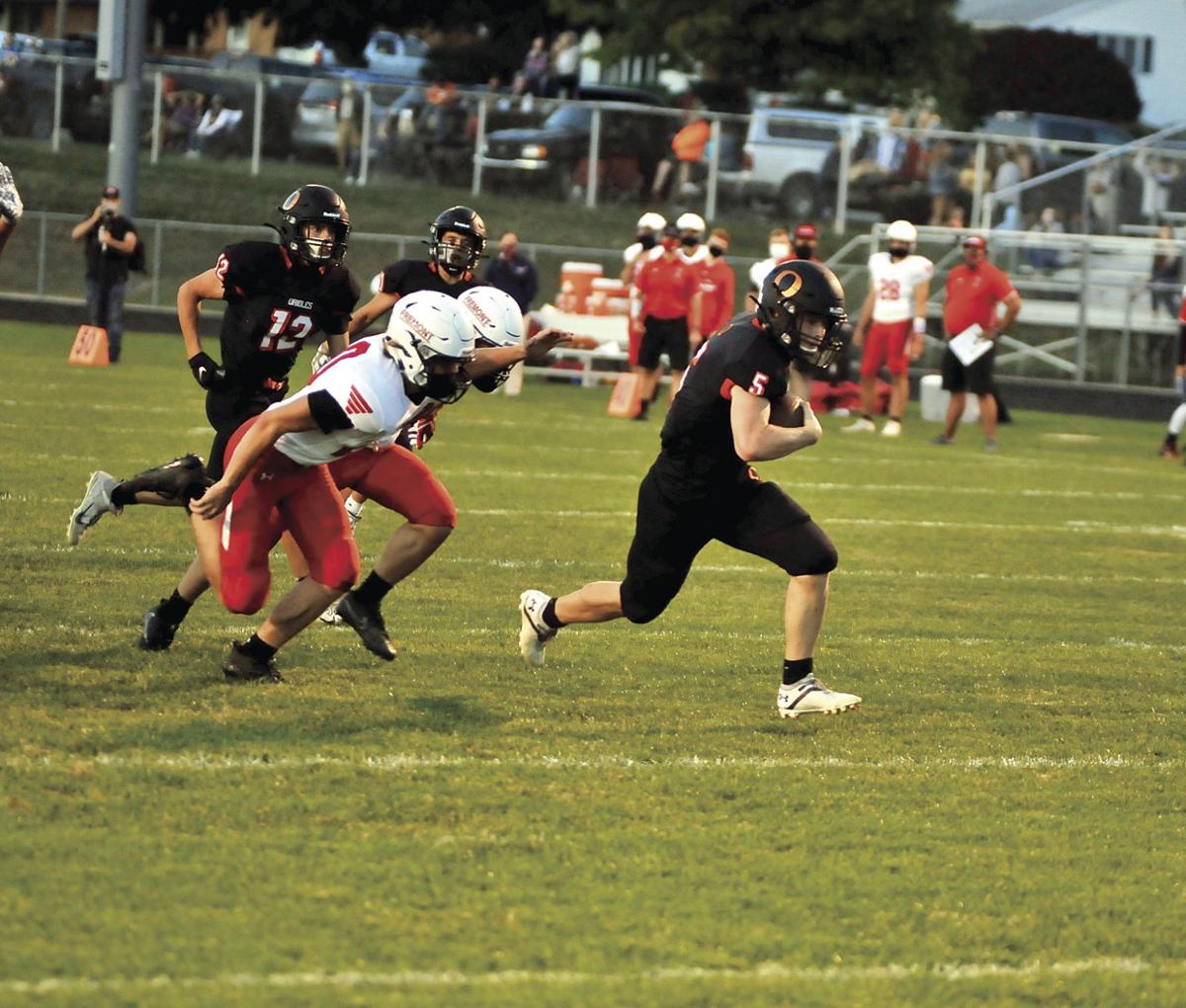 Ludington’s Trey Forfinski scampers for a gain against Fremont Friday at Oriole Field in Ludington. 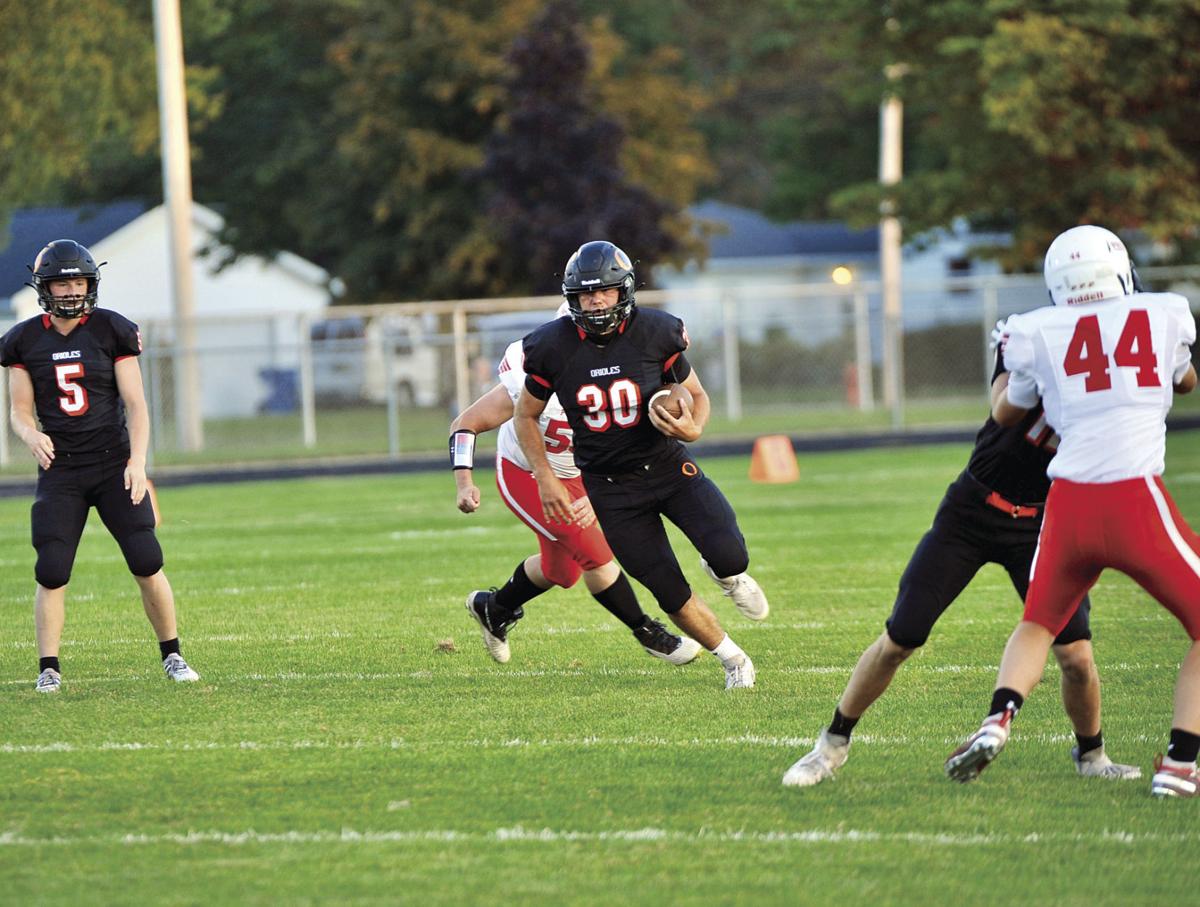 Ludington’s Trey Forfinski scampers for a gain against Fremont Friday at Oriole Field in Ludington.

At the beginning of the week, the Ludington football team was preparing for a neutral site game in Clare against Michigan Center.

But with a outbreak of COVID-19 at Michigan Center Wednesday, the Orioles were scrambling to find a game to fill the schedule.

For Ludington’s sake, Fremont was in the same boat as Grant shut down the school for a COVID-19 outbreak as well, and a game that would have been played had there not been the pandemic was back on, this time with the Orioles hosting the Packers.

“We had taken some things out that we were going to use against Michigan Center, but I was really pleased with how well the guys went out there and played,” said head coach Charlie Gunsell. “We just went back to the things we thought we’re pretty good at and it paid off.”

That it did as the Orioles came out guns ablazing and rolled over the Packers 41-22.

Both sides of the ball were stellar in the first half for the Orioles, as the defense forced six three-and-outs while the offense scored on five of their seven first half possessions.

For the offense, their first two scores of the ball game came on carries from Jake Plamondon, each going for four yards, putting the Orioles up early 14-0.

The two quarterback attack was in full force as well for the Orioles. In the first possession, Brad Mesyar Mesyar connected with fellow senior Kyle Barnett on a 38-yard touchdown pass, increasing the lead to 20-0.

Gunsell said they learned from their matchup last week against Muskegon Catholic and made a good change with how they used their two quarterbacks tonight.

“We predetermined tonight that we were not going to switch out our quarterbacks mid-possession because we felt it made us too predictable. We just went possession by possession and just really got a feel for the game of who was going to go in,” he said.

Trey Forfinski carried one score in from 21 yards out to make it a 27-0 game, then following a turnover on downs by the Packers, the Orioles offense was on the field for one play as Mesyar found Plamondon in the end zone for a 27-yard touchdown pass, making it 34-0 at the halftime break.

The start of the second half was not what the Orioles envisioned, as their first play of the half resulted in a fumble by Plamondon, giving great field position to the Packers at the Oriole 18 yard line.

On the Packers second play of the second half, Payton Mansfield connected with Gabe VanVliet on an 18-yard touchdown pass to get their first score of the game, making it 34-6.

The Orioles didn’t wait long to respond, as their first play of the ensuing drive, Forfinski broke free for a 75-yard touchdown run to get the lead back up to 35, with the Orioles leading 41-6.

With Gunsell getting the reserves some work in the second half, the offense went cold while the defense allowed a couple fourth quarter scores, with Mansfield and VanVliet connecting once again for a 12-yard touchdown, and Mansfield scampering in for a seven yard touchdown run.

The Oriole punt team also allowed a safety, making the final score 41-22, with the Orioles grabbing their first win of the year.

Mesyar was the Orioles leader through the air, connecting on 4-of-5 passes for 73 yards and two touchdowns. Barnett and Levi Laman led the team with 38 and 33 yards a piece on a catch each.

Ludington moves to 1-1 on the season and will face Orchard View in a conference matchup next week, a team that lost a lot of talent from their 9-1 team but still has some athletes to look out for according to Gunsell.

“They still have Swanson as their dynamic quarterback who has to be our top priority and Hyatt their fullback. Those two guys are going to draw a lot of our attention. We just gotta go back to our fundamentals get some great work in the scout team and go from there,” Gunsell said.