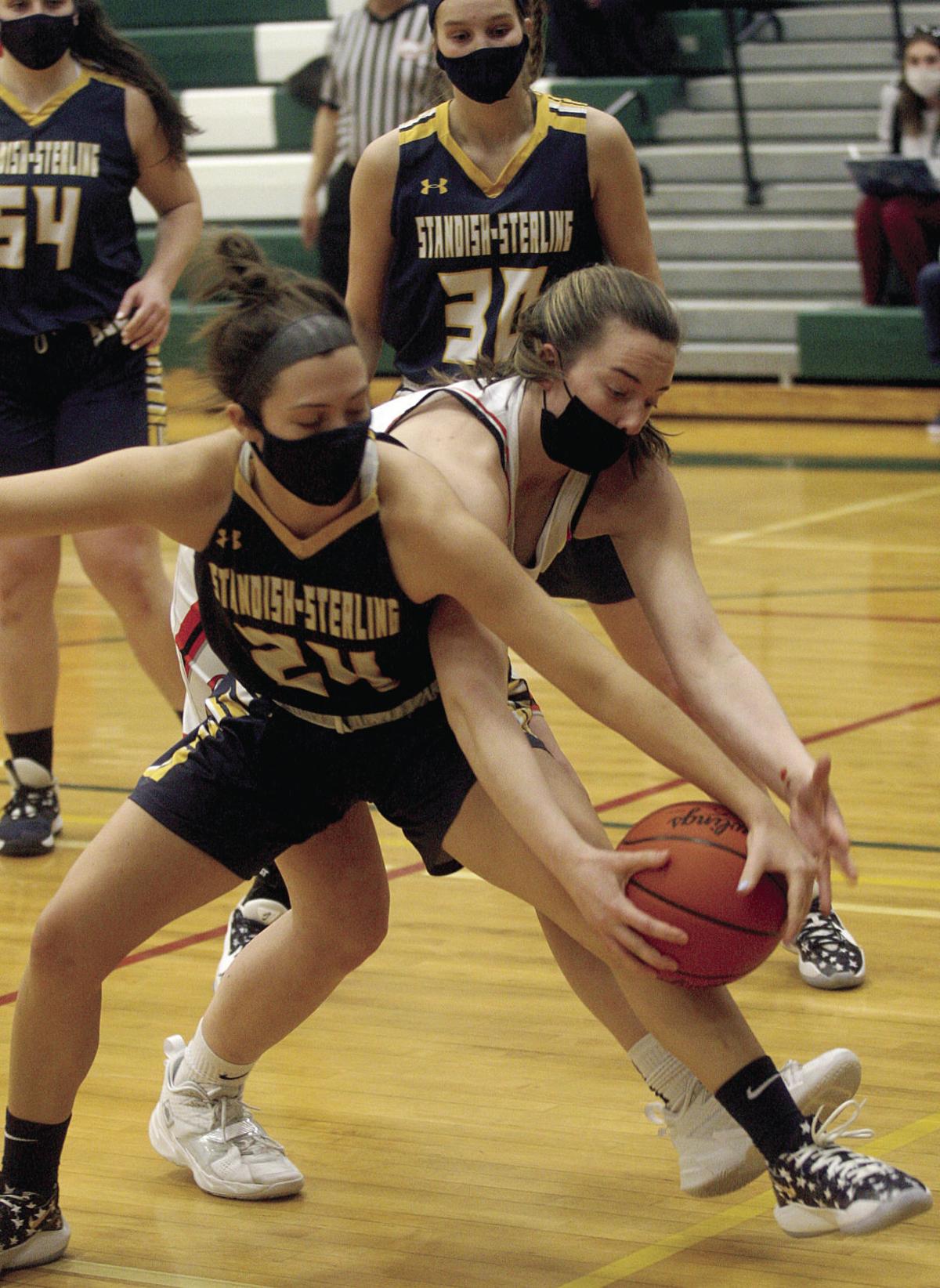 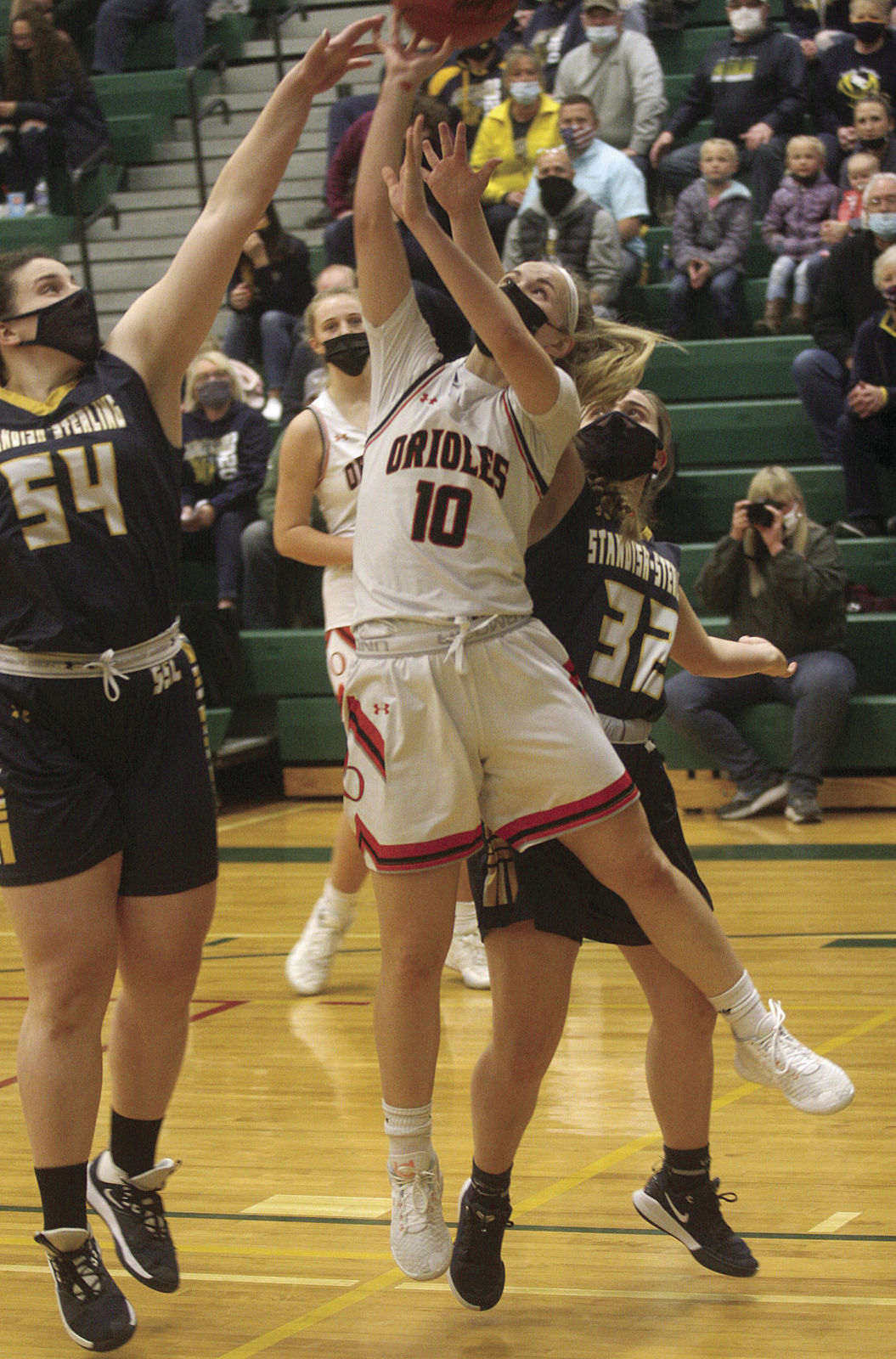 Ludington's Annie Kline attempts to get off a shot while being pressured by several Standish-Sterling players during Monday's Regional semifinal game played in Houghton Lake. 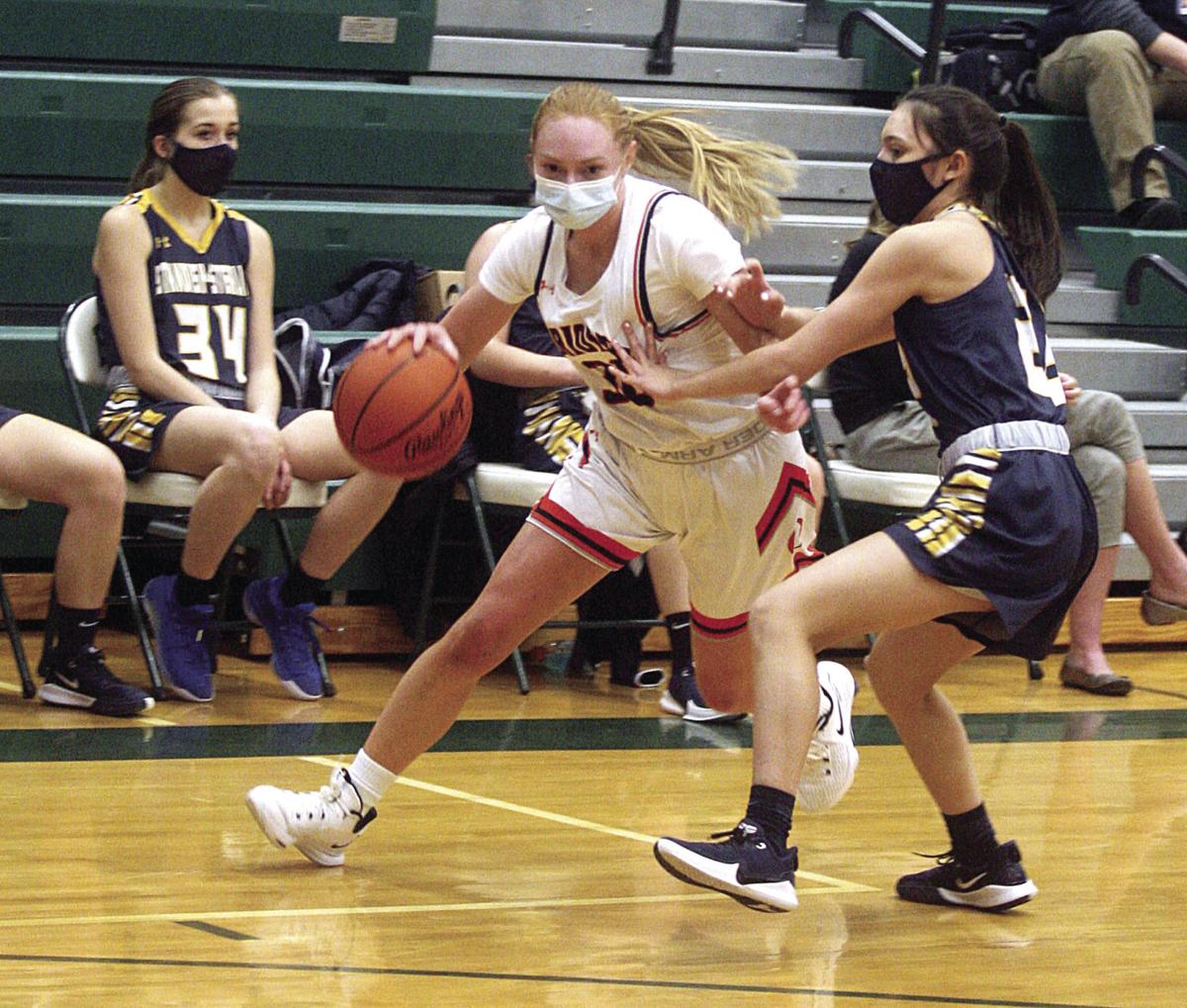 Ludington's Annie Kline attempts to get off a shot while being pressured by several Standish-Sterling players during Monday's Regional semifinal game played in Houghton Lake.

HOUGHTON LAKE — Playing in the program’s first regional since 2013, Ludington needed its best Monday night to top 16-win Standish-Sterling in a regional semifinal.

A solid all-around effort from the team with an 18-point night from Hailey Stowe helped lead the Orioles to their first regional final since 2012, topping the Panthers, 43-36.

After getting past the roadblock that was Cadillac last Friday, Ludington coach Warren Stowe says that the team feels like they can play a little more free.

“Conquering that mountain and beating Cadillac, you can play a little more loose. We feel like we’re the underdog a little bit,” he said, “not from a skill standpoint, but just not feeling like there’s a lot of pressure on us.”

A lid was on the basket for the Orioles to start the game as four quality attempts went to the wayside, not scoring their first basket until the 5:28 mark of the quarter.

This allowed Ludington to set up into its full court press, speeding up the Panthers and dictating the pace of the game.

Causing havoc and turnovers didn’t lead to baskets, however, for the Orioles, as the game sat at four apiece with 2:16 to play in the first.

Stowe gave the Orioles their first lead with 48 seconds to play in the quarter, as that was the final basket of the first, giving Ludington a 6-4 advantage before heading into the second.

Defense continued to dominate on both ends, with just a pair of free throws from Standish-Sterling being the only points of the second in the opening two-and-a-half minutes, knotting the game up at six each.

Ludington finally saw a bucket drop, this time at the 4:32 mark of the quarter, with a three coming from Stowe, while she added a pair of free throws on the next possession, giving the Orioles an 11-6 lead.

The Orioles continued their run with a layup from RyAnn Rohrer along with two Olivia Lynn free throws and a layup, upping their lead to 11 with just under two minutes to play before the half.

Standish-Sterling ended the half on 4-2 scoring run, but Ludington still had a nine-point advantage at the half, 19-10.

The two teams traded baskets to start the third, but it was the Orioles (13-4) that took advantage and increased their lead by a point to 27-17 midway through the quarter.

Ludington’s offense stayed patient on offense and even though it didn’t result in many baskets, still stretched their lead out to 12 with 2:23 to play in the third.

The Panthers (16-4) put on a full court press which sped up the Orioles and turned into easy baskets for Standish-Sterling as they cut the lead down to eight with 19 seconds to play in the quarter.

Ludington wasn’t done scoring, with Stowe knocking down a big three before the quarter buzzer sounded, getting its lead back up to 11 as they took a 32-21 advantage into the final quarter.

The Panthers couldn’t gain an edge in the early goings of the fourth, as Ludington was able to match them shot for shot and maintain an 11 point lead with 4:24 to play in regulation.

Following a Panther layup that cut the Oriole lead to nine, Ludington used excellent ball control on the offensive end to take over a minute and a half off the clock.

Solid free throw shooting is always needed to close out a game in March, and thanks to a combined 6-8 shooting from Stowe and Rohrer in the final two minutes, the Orioles clinched a spot in the regional final Wednesday.

Along with Stowe’s 18 points, Abi Bandstra and Rohrer each chipped in with seven points.