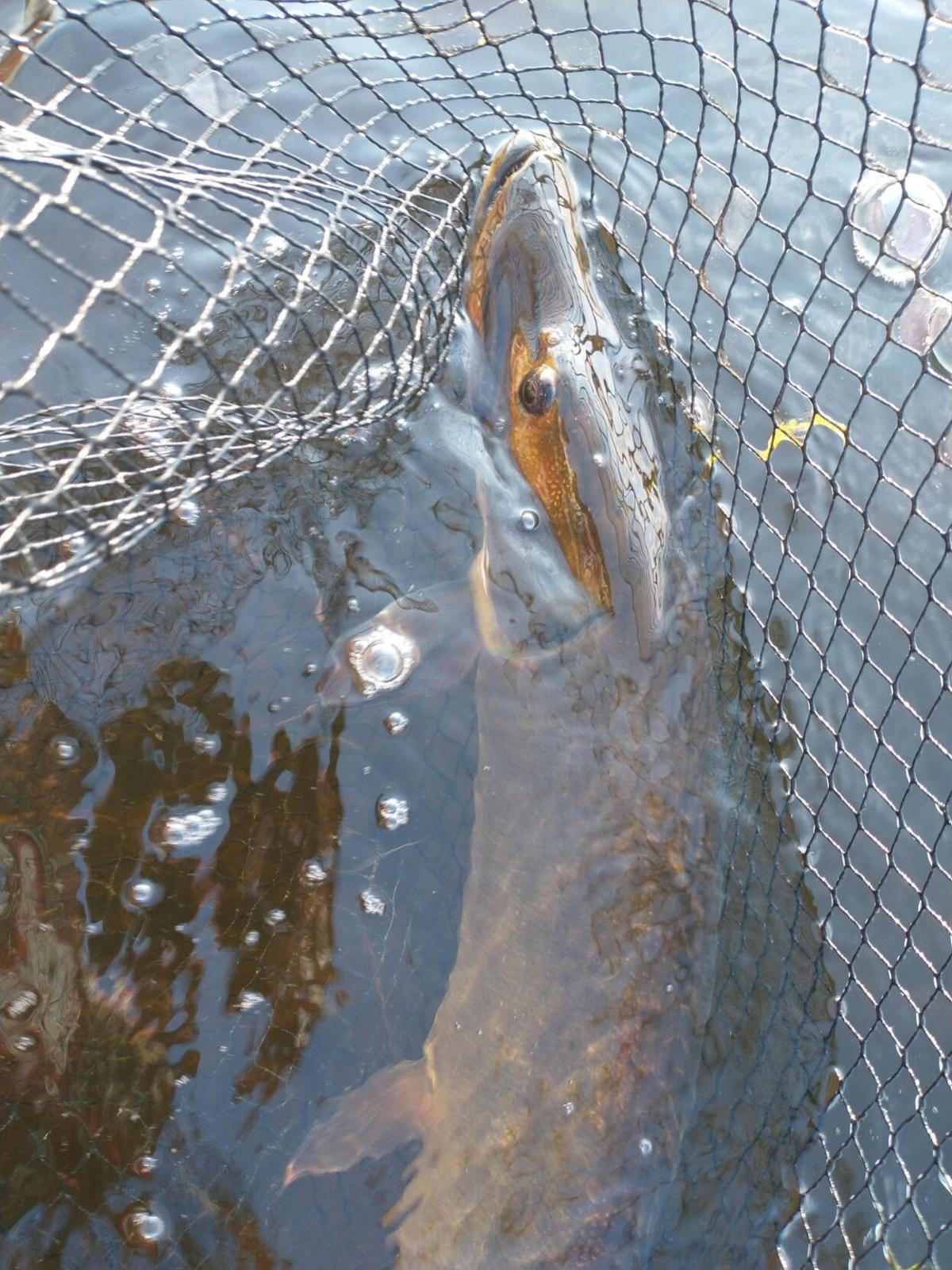 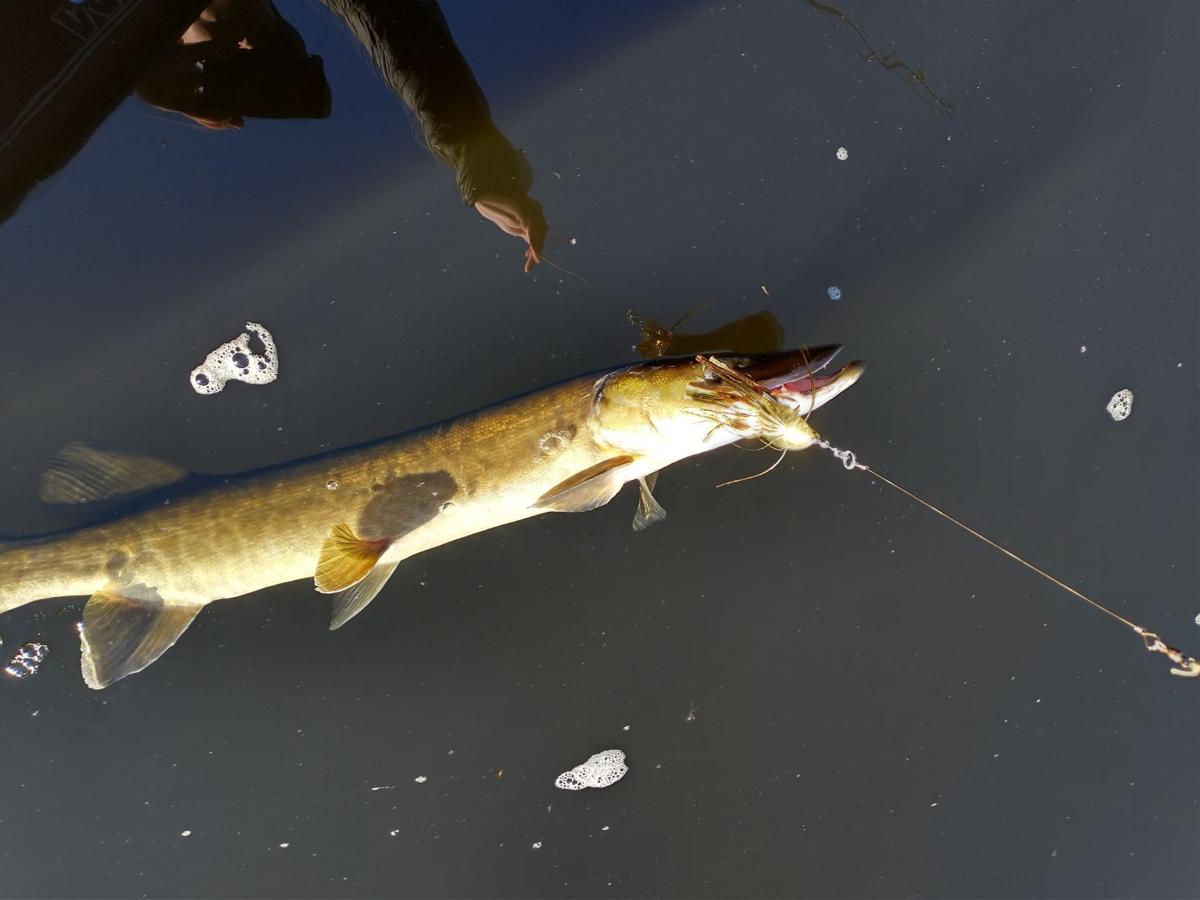 Muskies rarely play by the rules. And they have pretty screwy rules to begin with.

The “textbook” says that fall muskies go shallow and chase fast-moving baits. This occurs from water temperatures around 70 degrees down to around 58 degrees, after which the fish move off of the dropoffs and eat slower-moving lures and live suckers.

My fall trip to Iron County, Wisconsin, is generally centered around muskie fishing and this year was no different. Except I got blanked by the muskies a year ago.

In 2020, I stayed on a clear-water lake near the Wisconsin border that had a reputation for a few decent fish in it. I knew I could catch walleyes and possibly smallmouth there as well. As it turned out, I only caught walleyes on that lake, caught a smallmouth on another lake and caught a brook trout on a creek 100 miles to the west while we were touring waterfalls.

The air temperatures fluctuated wildly and so did the water temperatures. When it all ended, I had one aggressive follow and a couple lazy follows, but no muskies hooked.

This year, I decided to go back to the tannin-stained river system where I caught my first-ever muskie.

Rivers, you see, are more resilient when it comes to temperature. And their muskies, allegedly, are less confused by the various factors affecting muskie fishing.

It’s generally agreed upon in the fishing community that muskies bite better under certain conditions. The first of these is a falling barometer. So what you people call a “beautiful day” with a barometer reading north of 30, is a day that I am generally grumpy and the muskies are sulking under a pile of weeds with their fins over their eyes.

The barometer falls when fronts approach. Basically, if it looks like it’s going to storm, you’ll see muskie fishermen heading for the water. I almost had this bite me 10 years ago when Megan and I were on Emily Lake, a small “numbers” lake, as a storm was coming in. Megan had very fine blonde hair. We had some sprinkles earlier so her hair was partially wetted down. I stopped between casts and looked at her, then said “We gotta go!” Then I started shouting at her to reel in and fired up the boat. As we got underway, I snapped a picture of her hair standing on end.

I did catch some muskies that day, but it was before the static charge built up. We survived with no lightning strikes.

Another generally agreed-upon tenet of muskie fishing is living by the solunar tables. I say “generally” because some of my biologist friends disagree with it. But full moons and new moons and their associated events of moonrise and moonset, and also moon overhead and moon underfoot, are thought to be peaks of muskie activity.

Having said all this, while it’s a fishing vacation for me, it’s also a vacation for Holly, which means that I generally go against the grain and fish in the mornings, no matter the moonphase or the weather.

This year we arrived Saturday, Sept. 11. After the eight-hour drive and needing to get to town for dinner, I just ran the boat to our dock for the week. After dinner, I rigged my rods.

One of the things I spent 2020 doing was tying my own spinners. I did a few in the spring and then more in the fall after my unsuccessful muskie trip. The one I was most excited about was basically an imitation of a “Buchertail 700.” This is a tinsel spinner with a size 7 fluted Indiana blade. I made one with a gold blade and gold skirt.

Where to fish on this particular body of water is always a tough decision because it all looks so good.

Fall muskies relate to four things: weeds, rocks, wood and sand. The body of water I was fishing had everything but sand in it. However, when I last fished this impoundment in 2019, the biggest fish I moved all week was on a weedbed at the south end.

When I woke up Sunday morning, I motored downstream to the south end and was disappointed to see a kayak angler already down in the vicinity. However, it appeared he was throwing bass lures and he was not on the weedbed I wanted to cast.

It took me all of three casts to hook up and, of course, I didn’t have my net folded out. If you fish for muskies, you need a net about twice as deep as the average salmon net, so folding nets are popular. With one arm, I kept tension on the fish, while I flipped the net open with my other arm. Muskies, at their best, fight more like smallmouth bass than pike. Instead of staying deep and pounding, they do a little bit of running deep, then make runs dead away from you, then jump and thrash and splash. He did all of the above. Probably a she, actually, because she was a thick fish.

After a satisfying fight, I got her to the net. I could see she wasn’t the 42-inch minimum possession length, but she was solid for this impoundment. In fact, I’ve only seen three bigger fish caught on this body of water. She measured 38 inches long, roughly. I didn’t spend a lot of time measuring her as I wanted her back in the water. I put her in and she started to tip over, righted herself and then sat there for a couple minutes just finning with her back out of the water.

The conventional wisdom on how to treat muskies has changed over the years. Once, people would hold their tails and rock them back and forth. Then people realized pulling them backwards doesn’t help them breathe. So people generally hold them upright and push them forward gently to push water through their gills. The new thinking, though, is that if you’re holding a muskie, you’re causing stress, so the best thing to do with these fragile monsters is to get them in the water, turn them upright if they need it, but otherwise just leave them be until they get their wits about them and swim off. She did, so I was pleased.

That was it for day one. It was satisfying, though, as another rule of muskie fishing is “don’t fish memories,” but this memory paid off.

My second and only other muskie was just shy of three feet and came in a moment of inspiration. I had fished hard the second day with a variety of lures, but nothing was working out. It was a colder morning and turning into a bright day. I was motoring back upstream when I came to a large rock outcropping that my friend Dock Stupp first showed me. I remembered him saying that in the fall, muskies liked this spot. But I wasn’t thinking that hard when I motored toward it, I just noticed the sun was really intense on the rock and thought that that had to be warming that water up. So I stopped at Dock’s Rock for a few casts and lo and behold, on what was going to be my last cast, a muskie shot out and hit the same gold spinner. It was a smaller fish, just shy of three feet (I didn’t even measure), but it was an angrier fish. It took the spinner deep and my extra-long pliers could barely get to the back hook in its throat. But I was patient and careful and finally shook the fish off without netting it.

That was it for the muskies on the trip. I had a 14-incher fly over my lure on the last day I fished, but otherwise, it was tough fishing. Bad moon, bad weather, but a good time.

Although Hamlin Lake is the only stocked body of water in our area, muskies have been seen and caught in our rivermouth lakes as well. So what do you do for fall muskie fishing in Mason, Oceana or Manistee counties? Find the weeds, find the warm water, or find sand on the north side of the lake. Fish a spinner that you can retrieve at a good clip, at least until the water temperatures cool off a bit. Stay shallow and try the inside edge of weeds.

Once the water cools below 60 degrees, get one cast off of the outside weedlines and try slower-moving lures like Suicks and big rubber lures like Bulldawgs.

Fishing down here is not like fishing up there. They are the fish of 10,000 casts and then some here. But they can be caught and it’s worth your time to try. At the very least, you’ll catch some big pike and maybe a bonus walleye or smallmouth.