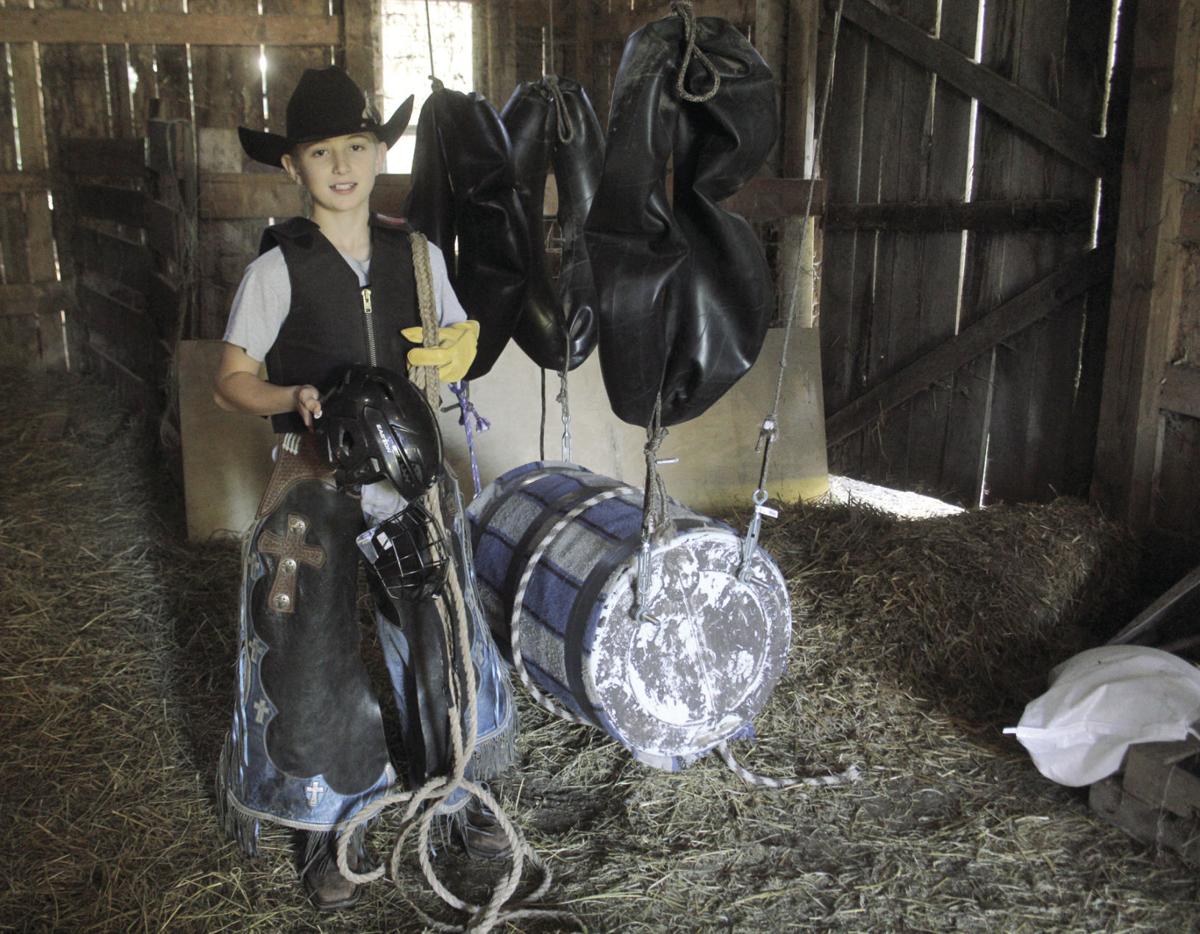 Custer’s Afton Shoup poses for a photo near a barrell he uses to practice his bullriding technique in his family’s barn. Shoup qualified for the 2021 International Miniature Bullriding Association World Finals in Reno, Nevada, that takes place next month. 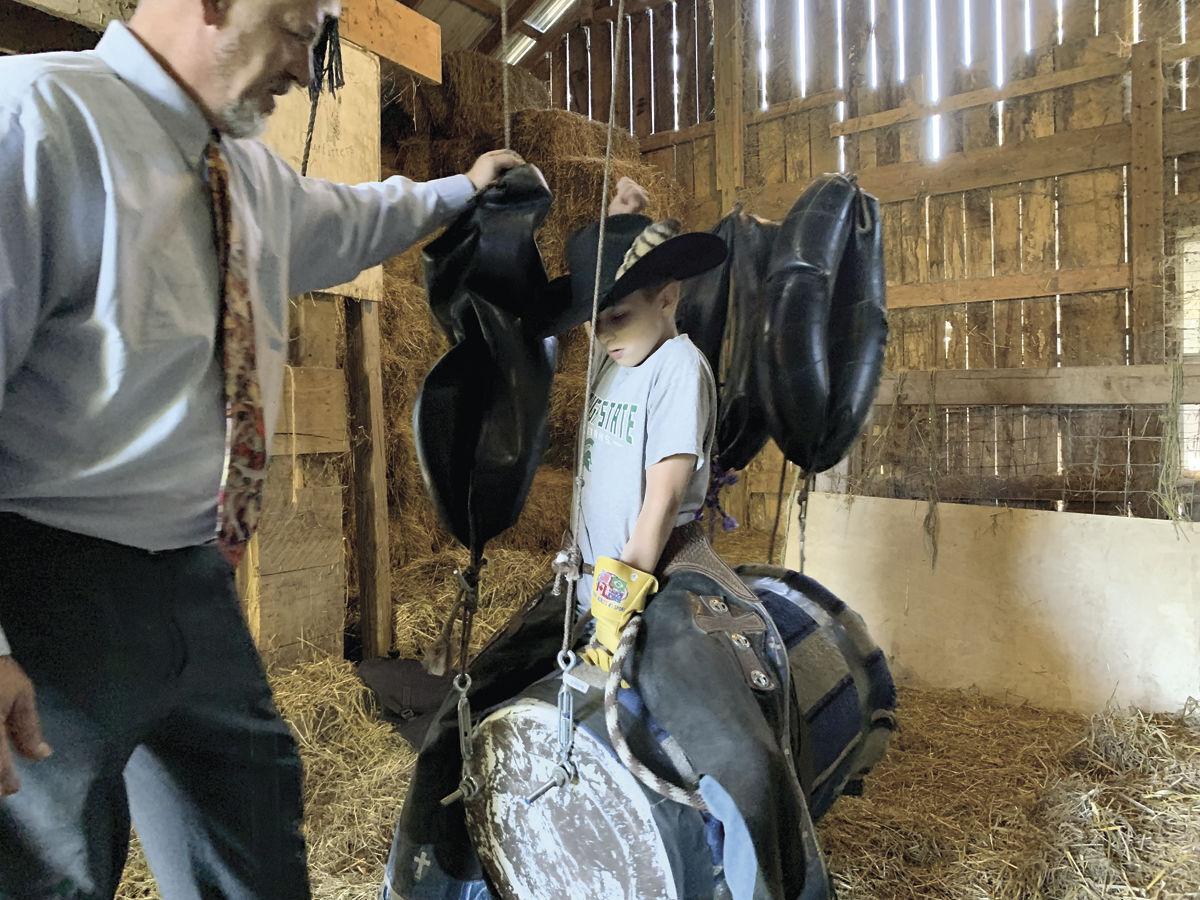 Paul Shoup pulls the ropes of a suspended barrel as Afton Shoup shows how he practices for his bullriding competitions in the family’s barn in Custer Township.

Custer’s Afton Shoup poses for a photo near a barrell he uses to practice his bullriding technique in his family’s barn. Shoup qualified for the 2021 International Miniature Bullriding Association World Finals in Reno, Nevada, that takes place next month.

Paul Shoup pulls the ropes of a suspended barrel as Afton Shoup shows how he practices for his bullriding competitions in the family’s barn in Custer Township.

CUSTER TWP. — It all starts, and really ends, with “8 Seconds” for Custer’s Afton Shoup.

Shoup, 12, so loved the movie that, with his family’s blessing, he trained in bullriding and now is looking forward to going to the 2021 International Miniature Bullriding Association World Finals in Reno, Nevada, next month.

Afton Shoup first saw the 1994 movie that features the life of Lane Frost, played by Luke Perry, about three years ago. Since then, he’s seen it “more times than I count,” he said.

The movie focuses on the life story of Frost, one the youngest bullriding champions in the world and a three-time champion. The movie inspired the son of Paul and Susan to learn to get into the sport of bullriding.

At first, Afton had a barrel suspended in the family barn for him to practice his bulldiring. Then, the Shoups allowed Afton to head to White Cloud to the Michigan Youth Teaching Rodeo Association.

Once he got on his first miniature bull, he said it was thrilling and exciting.

The riders for this age group ride miniature bulls, which are bred with smaller legs, Paul Shoup said.

Paul Shoup said the teaching rodeo is a bit unique because on the Saturdays is the training day with the Sunday being the competition.

“You can practice on any event that they have, and they have the full gamet of the rodeo stuff,” he said. “They work with trainers. There are bullriders that are competitive now. There was one guy who’s riding competitive with the (Professional Bull Riders) in January that’s a trainer. They have all of these people who are still doing or have competed in rodeos.

“They show the kids who to do it, work on their technique and critique them and on Sunday is the rodeo day. It’s a little different than rodeos that you can enter in, but they really focus on teaching and working with the kids.”

Afton said he went to the training rodeo three times over the course of the year because they got a late start. His last ride was a little more than two weeks ago with this weekend coming the awards ceremony for the season.

“With his rides, and his points, that’s what qualified him out of there to the worlds,” Paul said.

The IMBA World Finals took three competitors from White Cloud, and Afton is one of them. Where exactly he finished in the season at White Cloud, though, will be announced this weekend. Afton had 20 kids total in his age group, which is goes by birth years.

Reaching for Reno, though, was not anything Afton knew about when he got started.

“I knew you rode and you got awards and you keep doing that,” he said. “I didn’t know you could get into the worlds like that.”

Paul said the family learned about qualifying for the world competition in mid-October, and it came as a surprise.

“Quite honestly, we scrolled down the list of the names who were riding, and then Afton,” he said.

Afton was surprised he qualified. The family talked about the journey, and they decided to go for it. Paul said it is five nights of competition, and it starts up on Nov. 9 in Nevada. Competitors from around the world go to the event.

Afton continues to practice on the barrel that was hung up in the barn. Sometimes his brother Abe and sometimes his dad is the one to really put the barrel into motion.

Afton is a seventh grader at Mason County Eastern, and he could eventually be a part of a high school program, similar to riders the Shoups encountered in White Cloud.

“I’ll probably keep bullriding as I get older,” Afton said.

He very well could take part in what are called “kicker rodeos,” including the rodeo that the Western Michigan Fair has hosted in its past.

“Probably, soon. Maybe not next year,” he said.

What is your favorite dish at Thanksgiving?