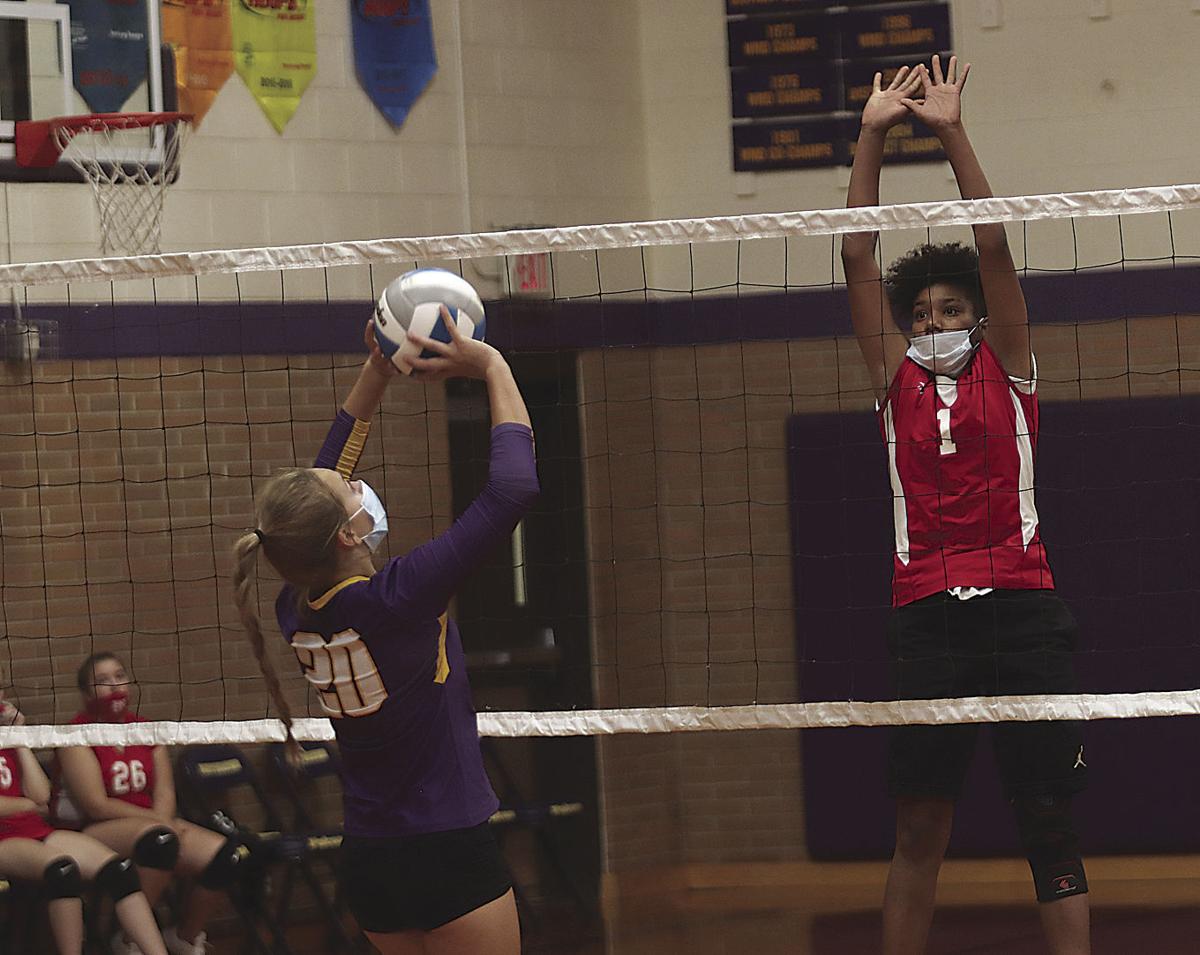 Pentwater’s Mikaylyn Kenney (left) sends the ball over the net as Walkerville’s Zamorah De La Paz leaps to block it during a September match at Pentwater. Kenney was named to the all-WMD first team this fall. 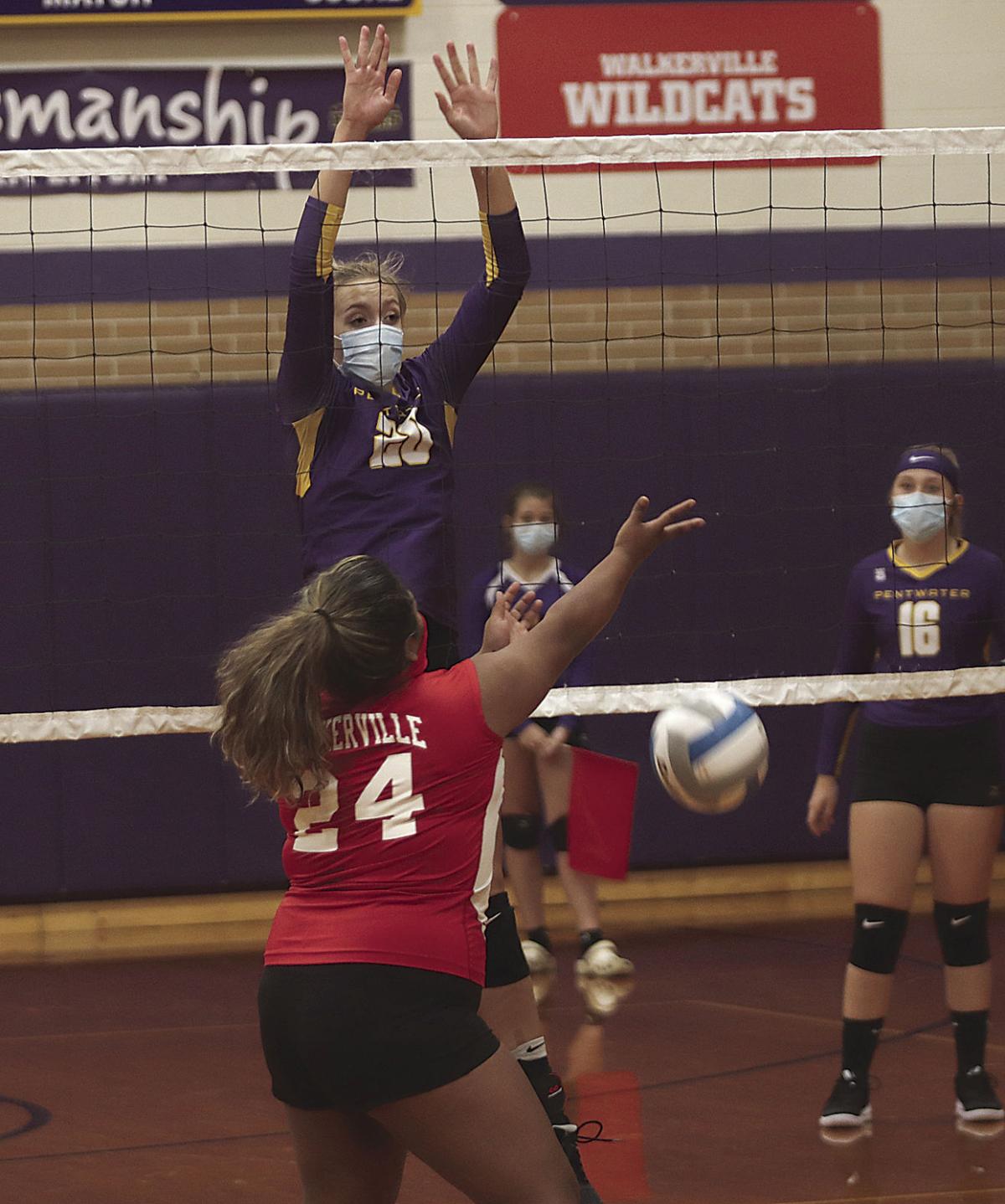 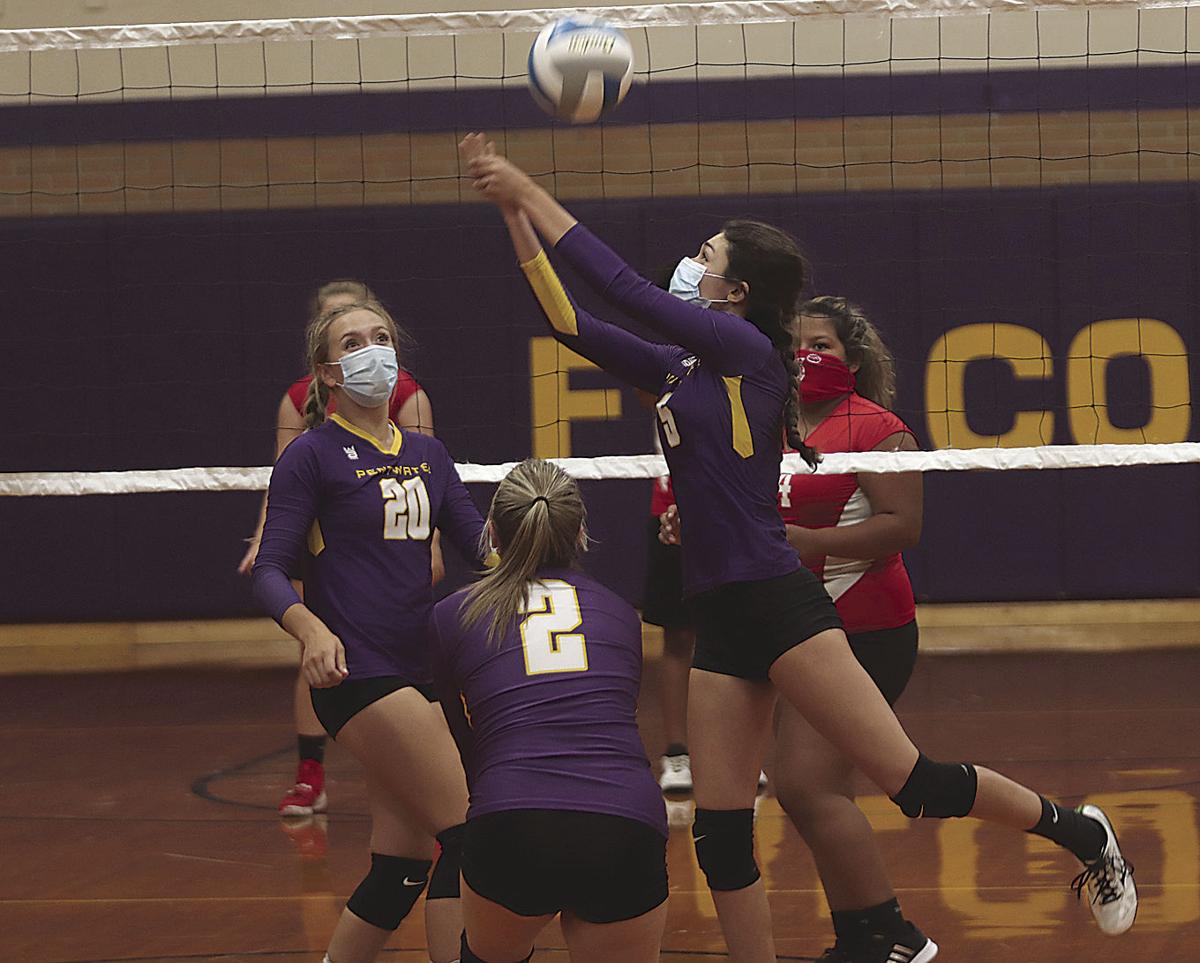 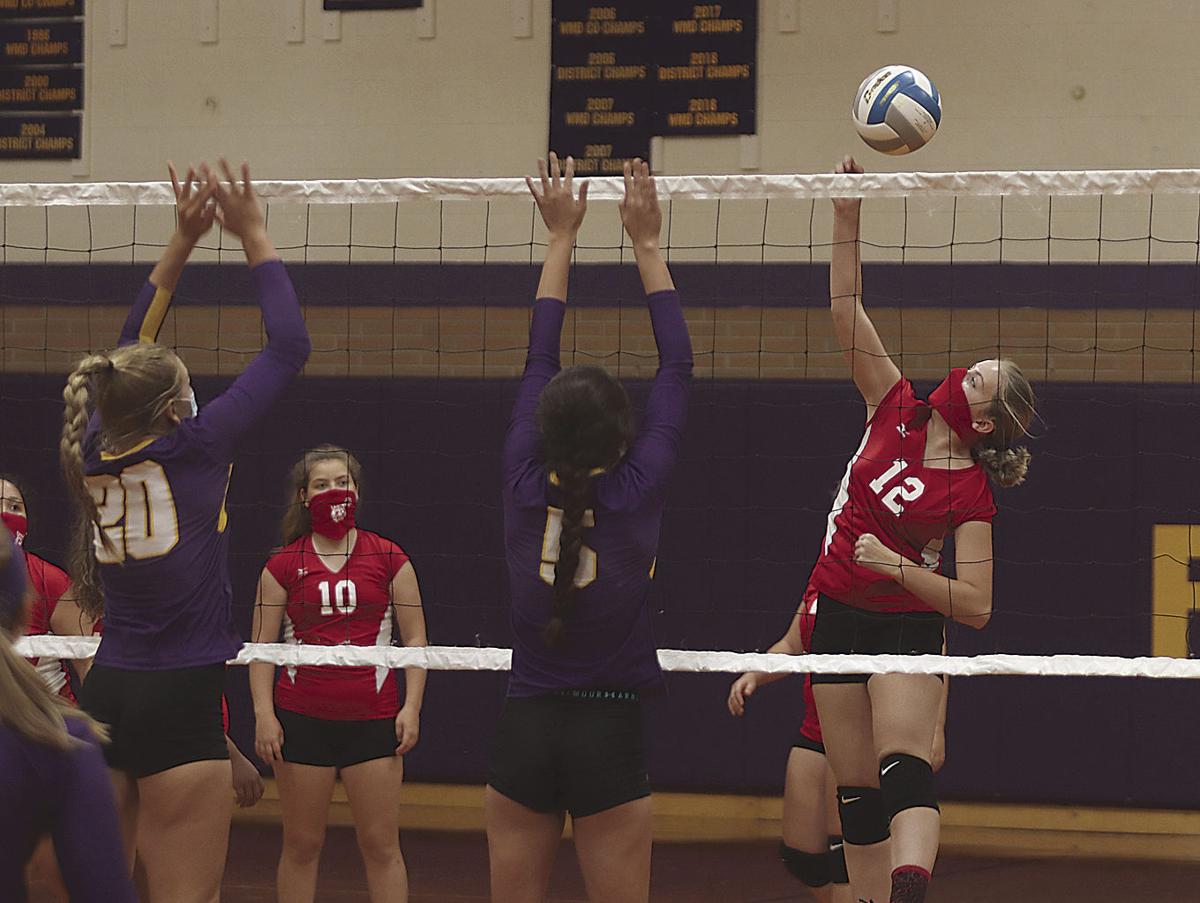 Pentwater’s Mikaylyn Kenney (left) sends the ball over the net as Walkerville’s Zamorah De La Paz leaps to block it during a September match at Pentwater. Kenney was named to the all-WMD first team this fall.

PENTWATER — Two old rivals took the court Monday night in their season openers, but for Pentwater and Walkerville, most everything looked new.

Most obviously were the masks, as for 2020, all players must wear them as part of the restrictions on playing the high-risk sport amid COVID-19.

Also, both rosters have turned over significantly since last fall, and the Wildcats have a new coach, with Kelly Pascavis now running the show after a long run by previous coach Kami Wightman. While the result was familiar — Pentwater has dominated the rivalry in recent years and earned a sweep, 25-16, 25-17, 25-21 — it was clear this season will be different for both sides.

The Falcons, who for coach Kerry Newberg’s entire tenure have always had a substantial group of returning, experienced players, this year only has one that fits that description: Junior Mikaylyn Kenney. Kenney was naturally the centerpiece of the Falcons’ attack Monday, posting 14 kills and eight digs to lead the team in both stats.

“She’s been with me since her freshman year, so really a third-year varsity player,” Newberg said. “That role has been passed down. I feel like there’s many girls that have been on my team since freshman year, so they’re used to stepping into that (role) their junior year. She’s a true leader out there.

“She’s one of those teammates everyone loves to have, because she’s going to pick everyone up when they’re feeling down. She’s obviously a go-to player too, so if we need someone to score a point, we can look to her to do that.”

Kenney was at the center of not just Pentwater’s offense, but a few of its more successful serving runs. She was at the line when the Falcons pulled away to put game two to bed, and her kill was part of a closing 4-0 run to finish off the sweep.

The Falcons have won a district title in each of Newberg’s seven seasons to date. Her focus on this group, due to the youth, has been different from those successful past runs, as she zeroes in on developing the younger players.

“We’re definitely working on more skill-building this year and getting down, really, to what we want Pentwater volleyball to be,” Newberg said. “That successful (mentality), digging every ball, getting a power hitter, serving the ball well. We’re trying to work into that groove for sure.”

However, freshman Samantha Schaefer showed she might have what it takes to be a breakout player, outperforming what she had done in practice, Newberg said. Schaefer posted eight kills and seven digs to rank second on the team in each category. (Crysta Cluchey also had seven digs.)

“She really stepped up and surprised me tonight,” Newberg said of Schaefer. “I was kind of planning on her playing on the right side because her swings weren’t quite down in practice, and she really came out and hit a couple, quite a few attack kills for us tonight. Even her serving was really good as well.”

Walkerville’s roster seems familiar, with several veterans of other Wildcat sports, but many of them are new to volleyball, including Zamorah De La Paz, Mykaela Berumen and Mitxi Santillan. However, each showed bright spots Monday. De La Paz was a presence at the net, and Santillan led many of the Wildcats’ best serving runs.

“A lot of my girls have never played volleyball, so it’s kind of new for them, but I think they did good and I think it was good for them to get out and see what it’s going to be like,” Pascavis said.

Walkerville showed tenacity, particularly in game three, never letting the Falcons pull away. The ‘Cats took a couple of brief leads and had the final game tied at 21 before the closing four-point run.

“We’ve got a lot of work, but I think we can accomplish it,” Pascavis said.