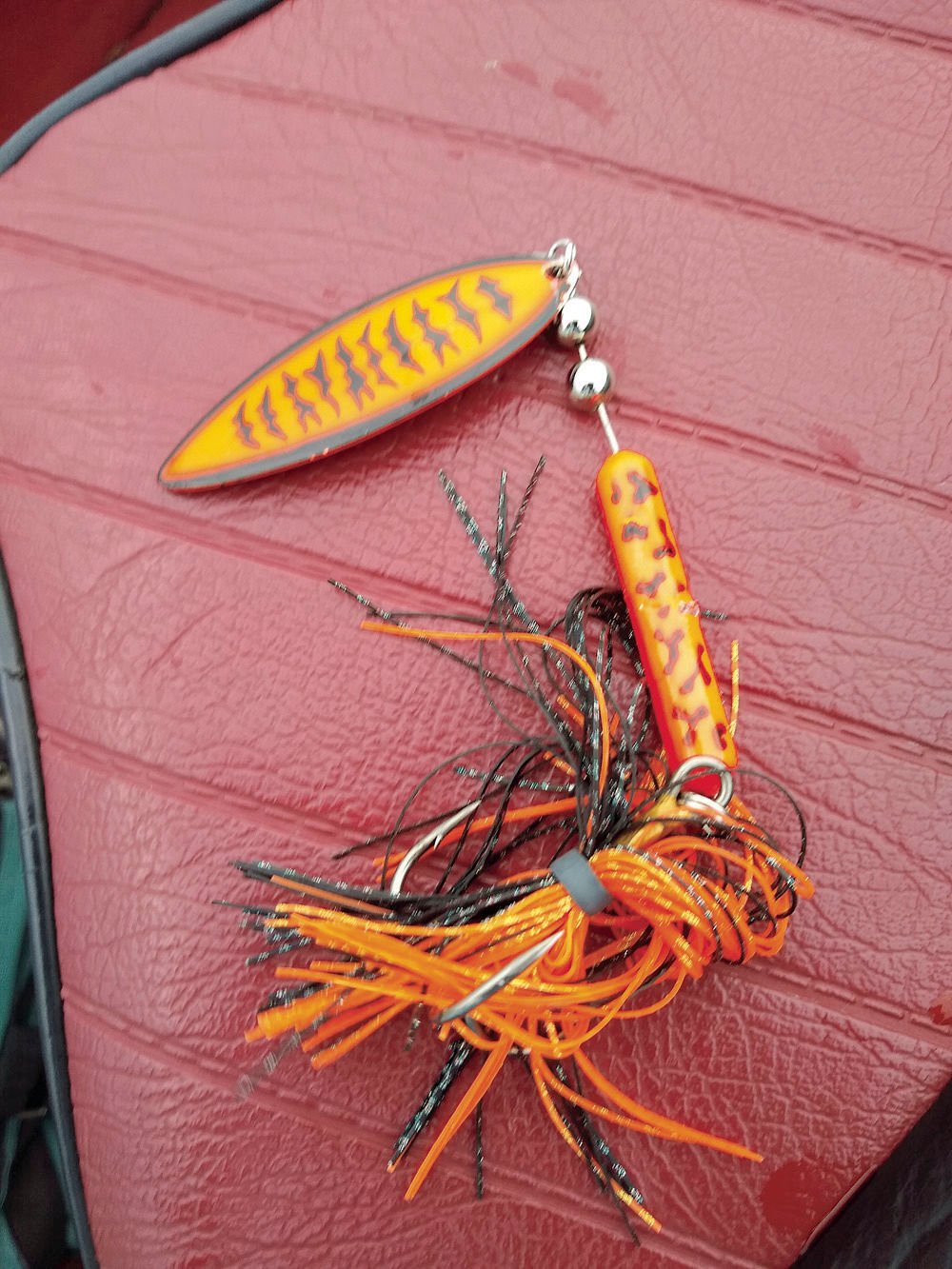 This Huskie Tail spinner got the job done in hooking a 42-inch muskie from Lake Hamlin last weekend. 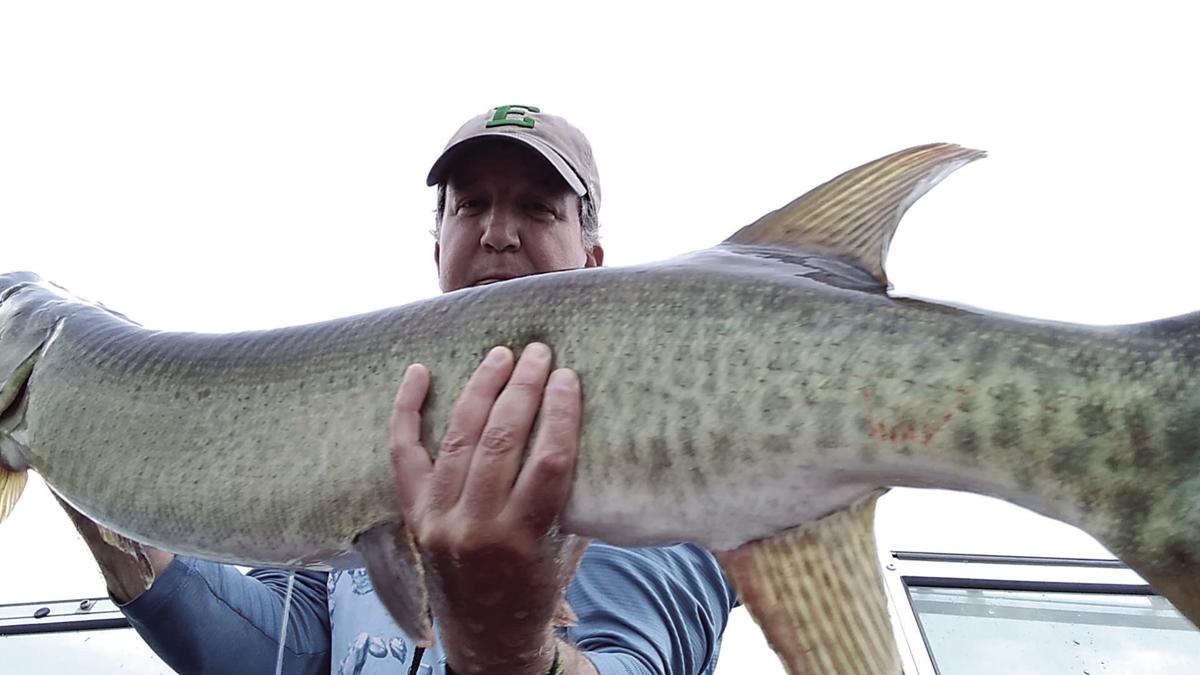 This Huskie Tail spinner got the job done in hooking a 42-inch muskie from Lake Hamlin last weekend.

In line at Wendy’s last Saturday night, I told my friend Lane Dulin on the phone that I needed to get on Hamlin that night. It was getting steamy and the barometric pressure was falling.

Those were my real thoughts, my real words, but did I really think I was going to catch a muskie?

I first started casting for muskies on Hamlin Lake in 2005 — the year a few of them got speared (still mysterious, that). Hamlin got stocked that September with 13,000 12-inch northern-strain muskies. The best-case scenario for those original fish reaching legal size would have been six years later or 2011, based on state averages — and assuming that there were no more of those mystery muskies around.

So there I was in May of 2005, throwing a 6-inch Bobbie Bait and happily catching pike, dreaming of the day that I would actually get a muskie follow, much less hook one.

I hooked three on Hamlin that I’m sure of between 2011 and 2019. I landed two of them. Yes, there’s a certain insanity in chasing them, even after more stockings and a change in the strain of muskie on the lake.

In the 15 years since those first muskies appeared, I have been just a little obsessed. I own about a dozen muskie books. I’ve got a stack of muskie magazines a foot high. I’ve listened to at least 100 hours of muskie podcasts, watched every video that YouTube would cough up. I’ve even grabbed a couple out-of-print books to read on inter-library loan with the help of our local librarians.

And the most inspiring book of them all is one I happened to be reading last week — again — called “Time on the Water.” It’s about a reporter who quits his job in L.A. to spend a season trying for a top-10 muskie in Vilas County, Wisconsin. You might understand why it inspires me.

In all those years I’ve caught lots of muskies — just not here. My biggest was a 43.5-incher in the U.P. with my son Jason and good friend Mark Mylchreest, the DNR fisheries technician in charge of muskie stocking and egg harvesting in the U.P.

I would be remiss here if I did not mention my buddy Dock Stupp, the first and only guide I’ve ever paid to take me muskie fishing. We spent a day chasing fish around Iron County, and he eventually got me one on a live sucker. We had many more adventures after that for muskies, salmon, panfish and walleye. Dock died two years ago and his loss is still heavy with me today. He had a unique point of view on life that I appreciated, and he taught me the basics of muskie fishing that I still use today.

Anyway, suffice to say, I became the most over-equipped, over-trained muskie angler in the Western Lower Peninsula. However, I was also somewhat competent in the field thanks to dozens of muskies landed in the U.P.

The humidity was rising and the pressure was falling. If you’re a bass angler, you understand. You can almost hear the fish jumping when the weather takes this turn.

I own a lot of muskie lures and I am pretty good with some of them. But as the Ugly Pike Podcast pointed out in its latest episode with guide Rob Cadeau, sometimes you need to simplify. I own so many lures, but I told my daughter that, tonight, I wasn’t going to use a bunch of different lures, I was going to use an orange-and-black Huskie Tail spinner and possibly some topwaters. I just wanted to cover water.

I spent the lockdown working out and fishing when I wasn’t able to work. I lost 32 pounds and I didn’t catch a noteworthy fish. But I learned water. I spent hours studying the map of Hamlin Lake and trying to apply some different strategies. As the old axiom goes, “If you always do what you always did, you’ll always get what you always got.” This year, I wanted to do something different.

I hit the lake before the motorboat lockdown and immediately when the restrictions lifted. I did not catch a muskie, but I raised three. Maybe all that exercise improved the blood flow to my brain? Whatever it was, I felt more confident. I wasn’t just flinging lures foolishly, I was on the trail of Hamlin’s muskies.

In June, I switched up because of the boat traffic. I tried some trolling over open water. I didn’t catch a muskie, but I had two hits over very deep water with the boat going 4 mph. At that speed, you’re almost certain it’s only a pike or muskie that hit. I watched one of my planer boards go under like a bowling ball got dropped on it.

I was close and I knew it.

But the bug hatches got worse and worse and I decided, after talking to friends about the bass and walleyes being shallower, that I would go to the nearest cabbage bed from the spot where I had that big rip.

Muskies love cabbage beds. This is no surprise. And Hamlin has about three or four miles of cabbage beds that are adjacent to deep water. But this spot made sense to me on this day. It was a spot I had ignored for 15 years and the weather was right. If it was ever going to produce, tonight would be a great chance.

Instead of motoring all the way there, I worked my way closer with the trolling motor. I started casting in 18 feet of water, angling shallower toward the spot. I made maybe 50 casts overall and 10 casts over the weeds when he hit.

I have caught a handful of fish where the fight is forever imprinted in my mind — two were muskies in the U.P. and one was a walleye in the U.P. This one is one I won’t forget because he hit hard — I was reeling as fast as I could and he took drag on the hit. Muskie reels have strong drags — nothing takes drag on me unless it’s really big. I knew I had something big. The fish stayed down and I couldn’t see anything. I felt it shake its head, but not so often that I thought it was a pike. My best guess was a muskie or a giant walleye. It came up to within 4 feet of the surface and flashed about 2 feet of gold, which didn’t narrow it down any. Then it stayed down for seconds that felt like minutes.

It abruptly changed direction, coming up. I lowered the rod tip as it broke the surface and tailwalked momentarily. I let out my best barbarian roar of delight when I saw it — and nobody noticed I was alone at 8 p.m. on Hamlin Lake on a summer Saturday night. I laughed as I cranked.

Then I realized I better unfold that giant muskie net I have in the boat at all times. I got the net ready, realized I should turn off the trolling motor and got him in close. I noted he had the spinner firmly in the corner of his mouth as he dove on me, taking drag, once, twice, three times.

Finally, after a great fight, he was spent. I got him in the cavernous net and yelled again.

I can’t remember who wrote it but Bill Gardner quotes it in “Time on the Water,” — “The surest roads to ruin are to fall in love with the wrong woman or to take up muskie fishing.”

Well, I didn’t fall in love with the wrong woman, and I’d like to thank Holly, Jason and Megan for putting up with my insanity all these years. It hasn’t ruined me yet.

Finally, finally, I have landed a legal Hamlin muskie.

I released him angry and alive and I could not be happier.