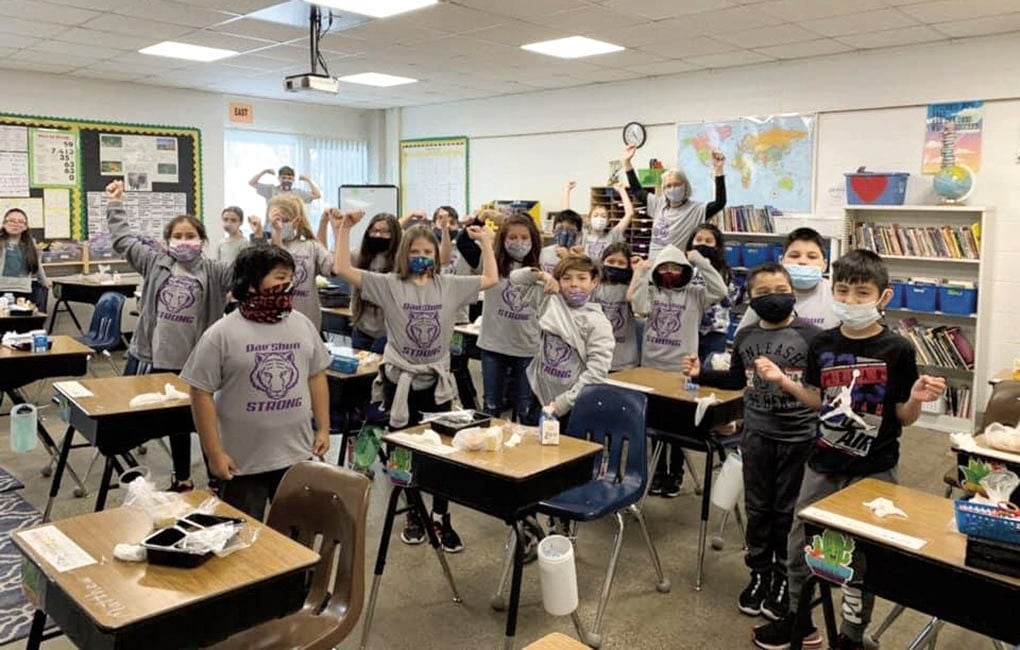 A fourth-grade class at New Era Elementary School wears their “Dae’Shun Strong” T-shirts. The shirts were made to support 10-year-old Dae’Shun Jamison of Shelby, who is battling a rare syndrome linked to COVID-19 cases and will need to have both his legs and both his hands amputated. 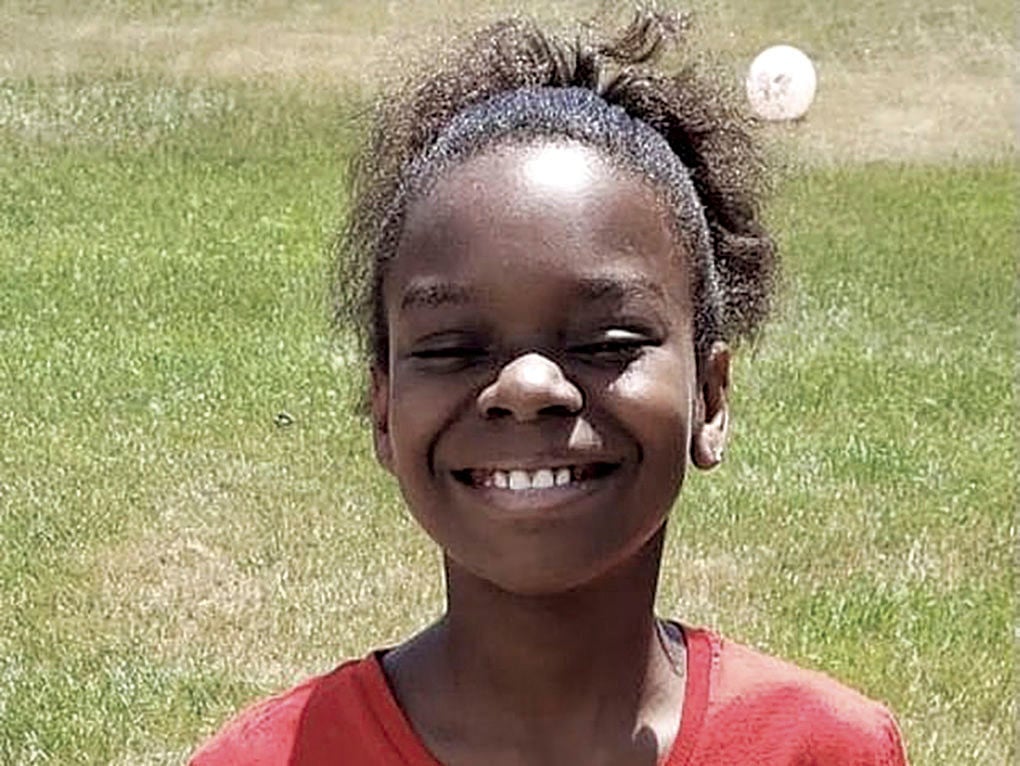 10-year-old Dae’Shun Jamison of Shelby flashes a smile. Jamison has been hospitalized since December with MIS-C, a condition linked with COVID-19 cases. 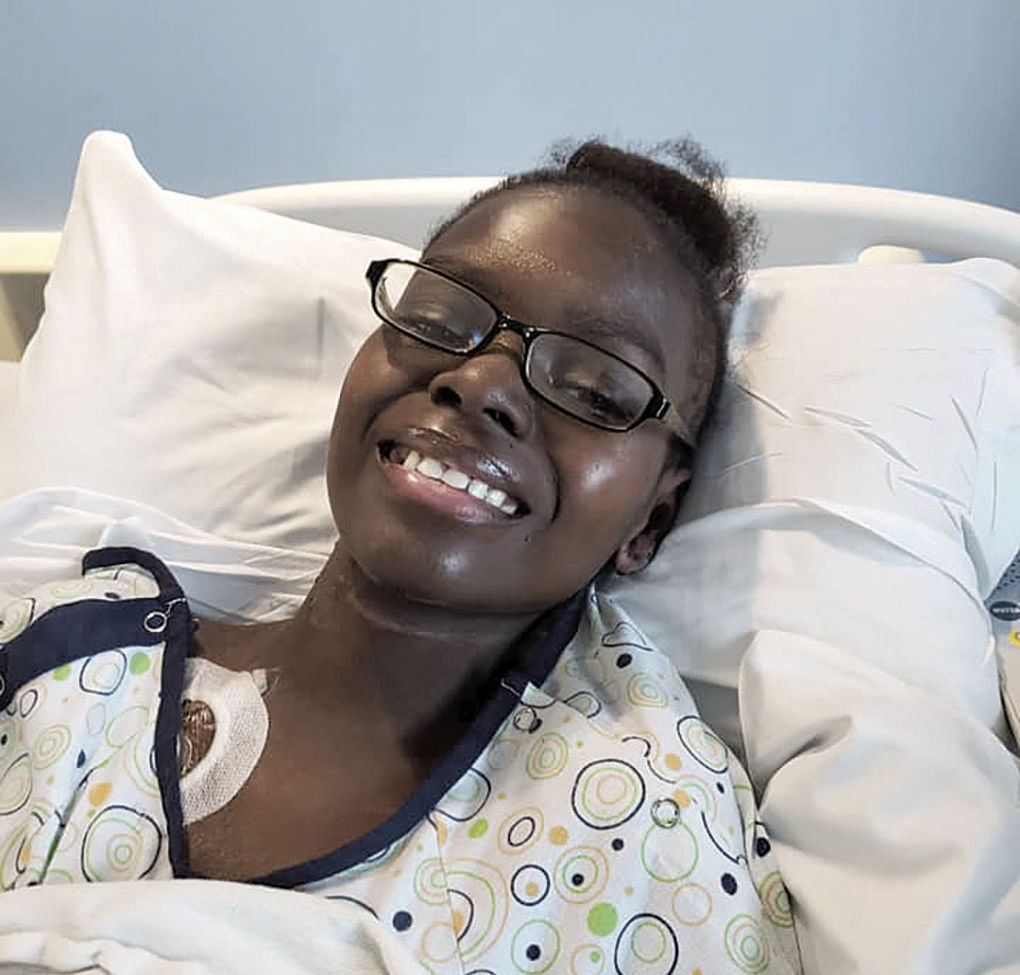 10-year-old Dae’Shun Jamison of Shelby smiles in his hospital bed while battling a case of MIS-C, which has been linked with COVID-19. Jamison tested positive for COVID in December and began experiencing symptoms of MIS-C later in the month. 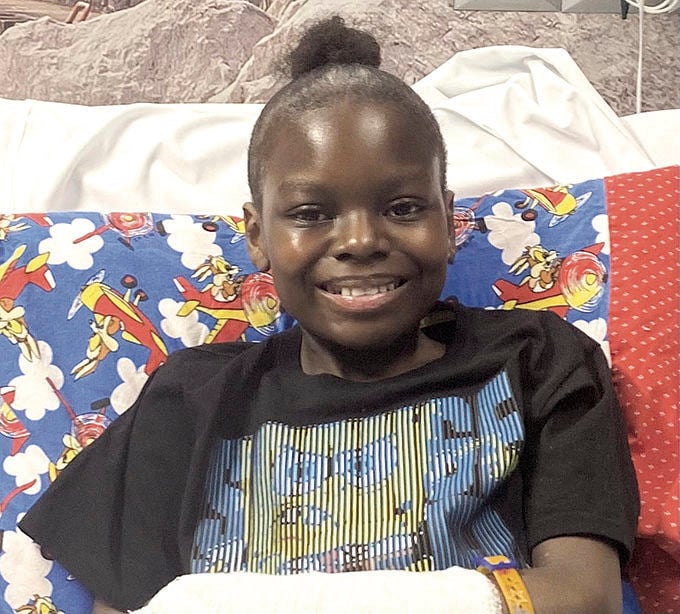 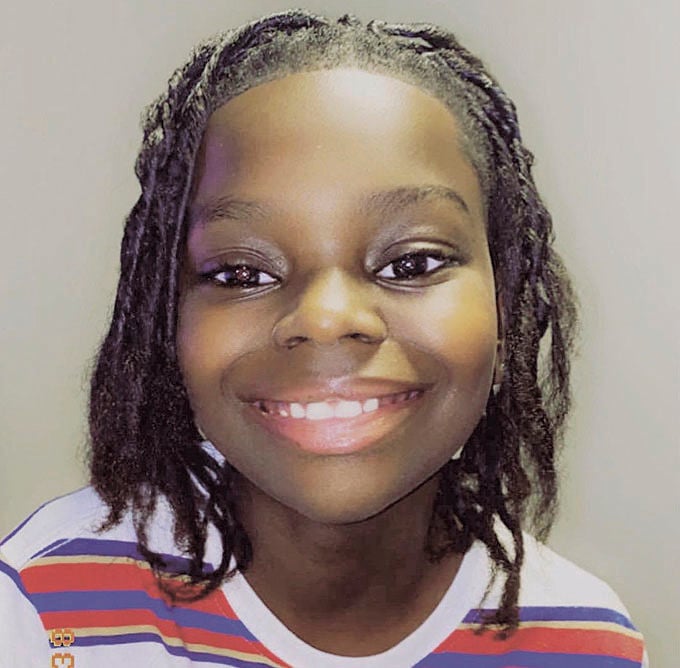 A fourth-grade class at New Era Elementary School wears their “Dae’Shun Strong” T-shirts. The shirts were made to support 10-year-old Dae’Shun Jamison of Shelby, who is battling a rare syndrome linked to COVID-19 cases and will need to have both his legs and both his hands amputated.

10-year-old Dae’Shun Jamison of Shelby flashes a smile. Jamison has been hospitalized since December with MIS-C, a condition linked with COVID-19 cases.

10-year-old Dae’Shun Jamison of Shelby smiles in his hospital bed while battling a case of MIS-C, which has been linked with COVID-19. Jamison tested positive for COVID in December and began experiencing symptoms of MIS-C later in the month.

Countless people throughout the world have been hit hard by the COVID-19 pandemic in some way or another. 10-year-old Dae’Shun Jamison of Shelby has been hit as hard as anyone, but he is somehow still able to stay positive.

“I’ve learned that he’s trying to make the best out of the situation,” his mother, Brittney Autman, said. “After all he’s gone through, he’s still able to smile.”

Dae’Shun is at Mary Free Bed Rehabilitation Hospital in Grand Rapids recovering from one of the harshest known cases of multisystem inflammatory syndrome in children (MIS-C), a new syndrome that has been heavily linked to COVID-19 since last spring. The syndrome is a rare complication of the coronavirus disease; just over 2,000 cases have been reported in the United States, according to the Center for Disease Control, with 30 deaths attributed to it.

African American and Hispanic children appear to be especially vulnerable to MIS-C; the CDC said that they account for nearly 70 percent of MIS-C diagnoses. When children develop MIS-C, organs and tissues can become severely inflamed; that’s what happened to Dae’Shun. They became so inflamed that doctors were forced to amputate his right leg Jan. 15, and will have to take away his left leg and his hands Monday, Feb. 22.

Dae’Shun tested positive for COVID-19 in early December, but was asymptomatic. It wasn’t until he’d passed the two-week recovery window for the disease that his MIS-C symptoms manifested, on Dec. 20. (The CDC says that this is the most common timeline with MIS-C cases.) The next day, he was hospitalized, and he has been ever since, first at DeVos Children’s Hospital and now at Mary Free Bed.

Dae’Shun has autism, which complicated matters for Autman and doctors as they explained to him the amputations he would need, but Autman said on a GoFundMe page in January that he understood. It was a tough day for the young man, and certainly it was for Autman as well; the first few weeks of updates on Dae’Shun’s condition on the page read like a nightmare scenario for any parent.

“Me and a few other people at the hospital told Dae’Shun about what is going to happen...and he understood everything,” Autman said on the page. “He understood that when he wakes up, his leg will not look the same. Dae’Shun completely broke down in tears, which affected me in so many ways. I can’t believe this is really happening to my baby.”

However, since then, Autman said her son has displayed extraordinary strength and optimism. Dae’Shun attended New Era Elementary School prior to his hospitalization and has kept in touch with his classmates by sharing pictures back and forth. In every picture sent to the school, said principal Kara Vanderweele, Dae’Shun has been smiling and is often giving a thumbs-up.

“He always had a smile on his face,” Vanderweele said. “He loved books. Paper was a release for him. He liked turning the pages of books. He liked the way it felt. He did everything everybody else did...He went out for recess. He ran, he played, and he jumped.”

US targets Iranian militants in Syria

In recent weeks, Dae’Shun has taken great physical strides, Autman said, which has, along with her son’s constant smile, kept her spirits up.

“Seeing him progress from where he was to where he is now, the smile on his face...That motivates me and keeps me going,” Autman said of her son. “I’m seeing him do all those things that he couldn’t do two months ago. He can sit up on his own. He can feed himself. He can move his arms. He couldn’t do that a month ago.”

Autman said that she and doctors have had preliminary discussions regarding prosthetics for Dae’Shun in the future, but with the unknowns in his case, they’re mostly taking a day-by-day approach to his care.

In the meantime, Autman is by his side every day, hence the GoFundMe page; she has been unable to work between being with him and also being with her seven-year-old daughter, De’iijah. The support has been remarkable; at press time over $59,000 had been raised for the family, and the ever-increasing goal amount has been raised to $80,000.

Support has also come locally. Staff at the New Era school did a collection to provide the family with gas money, gift cards, groceries and other supplies. The West Shore Educational School District provided a grant to the class, and Windridge Textile Printing in Shelby did a run of shirts that read “Dae’Shun Strong”, giving the school a discounted rate. Profits from the sale of the shirts go directly to the family, and Dae’Shun’s classmates were naturally first in line to buy them. Among the many get-well cards and photos they shared with him was a group photo of the class wearing the shirts. They’ve also shared a video encouraging their friend.

“It means so much to me,” Autman said of the local support. “I show him pictures of the kids of his school, (wearing the shirts that say) ‘Dae’Shun Strong’, and it makes him smile. I’m so thankful for the support I have. Without it, I don’t know what I would do.”

His class, naturally, had questions when Dae’Shun left them in December, and Vanderweele said they’ve tried to “stick to what we know” when discussing what has happened to their friend.

“We talk about the doctors doing their best, and when he’s healthy enough, we’ll see him again,” Vanderweele said. “He lives (diagonally) from Thomas Read (Elementary), or he did before he went to Grand Rapids, so we’d see him often.”

As you’d expect, Dae’Shun’s younger sister misses him; Autman said some days, her daughter gets upset and wonders when Dae’Shun will come home, and at those times she has to encourage her daughter to be strong, just as she does for her son. Brother and sister remain close; the two regularly FaceTime one another, and she recently got to visit him in the hospital for the first time since he was sent there.

It’s not clear now where the end of the tunnel is for Dae’Shun, nor what further difficulties he will face when he reaches it. However, as the shirts say, there can be no doubt that yes, Dae’Shun is strong.