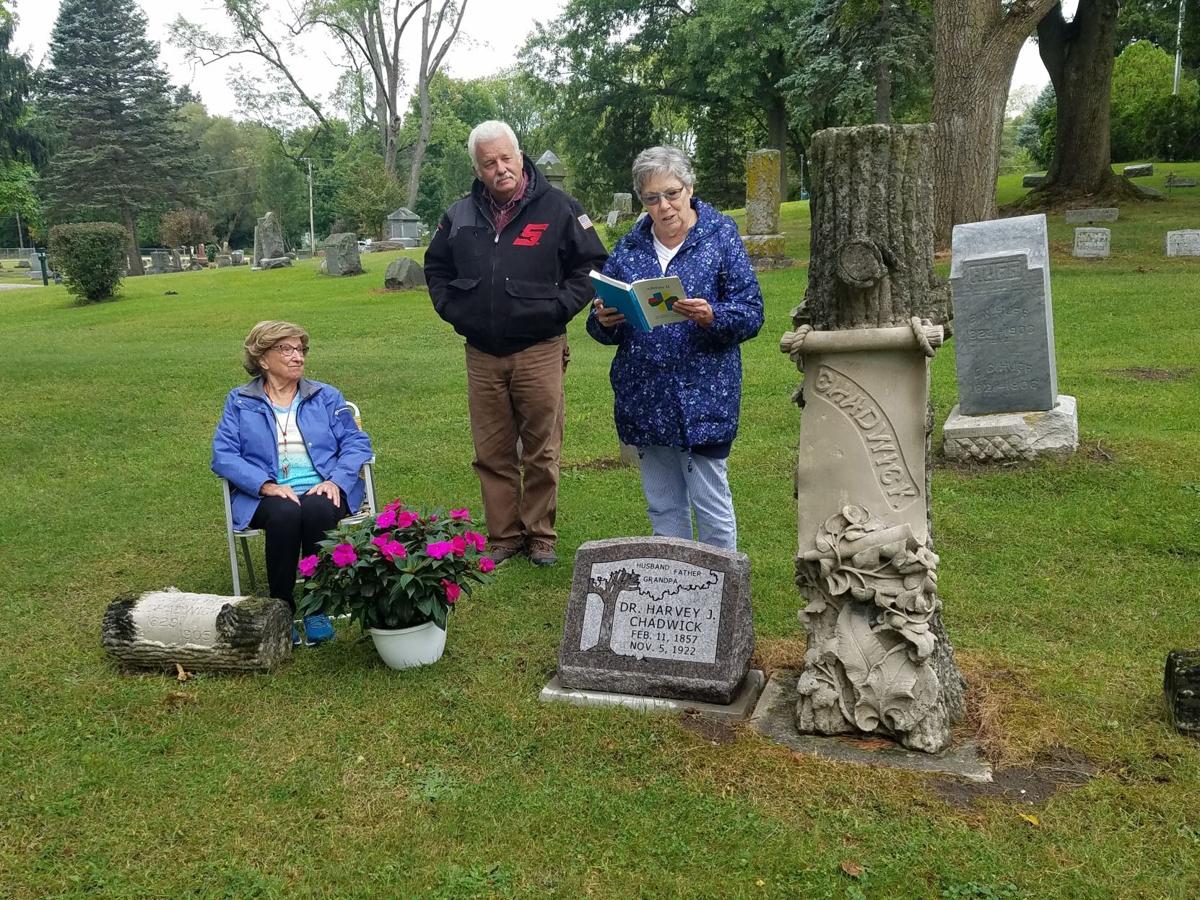 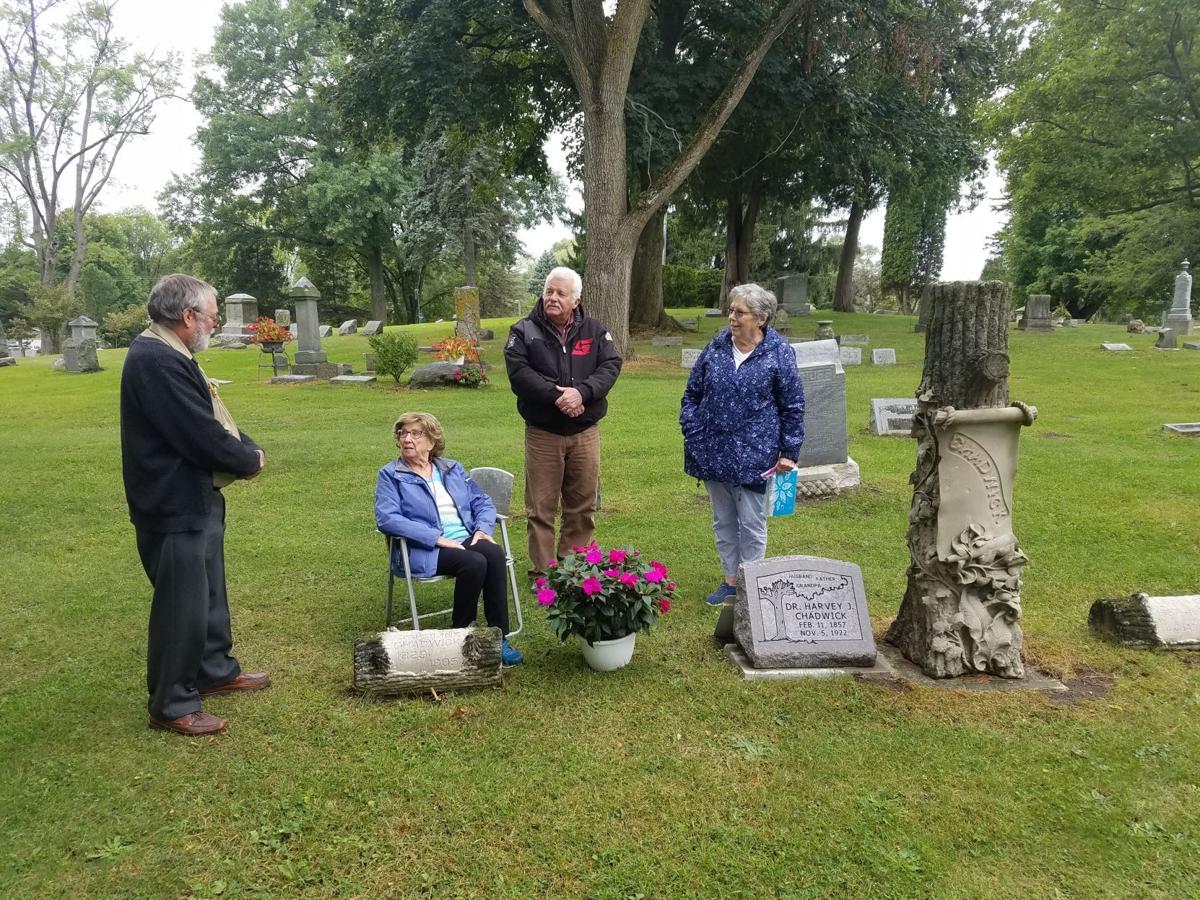 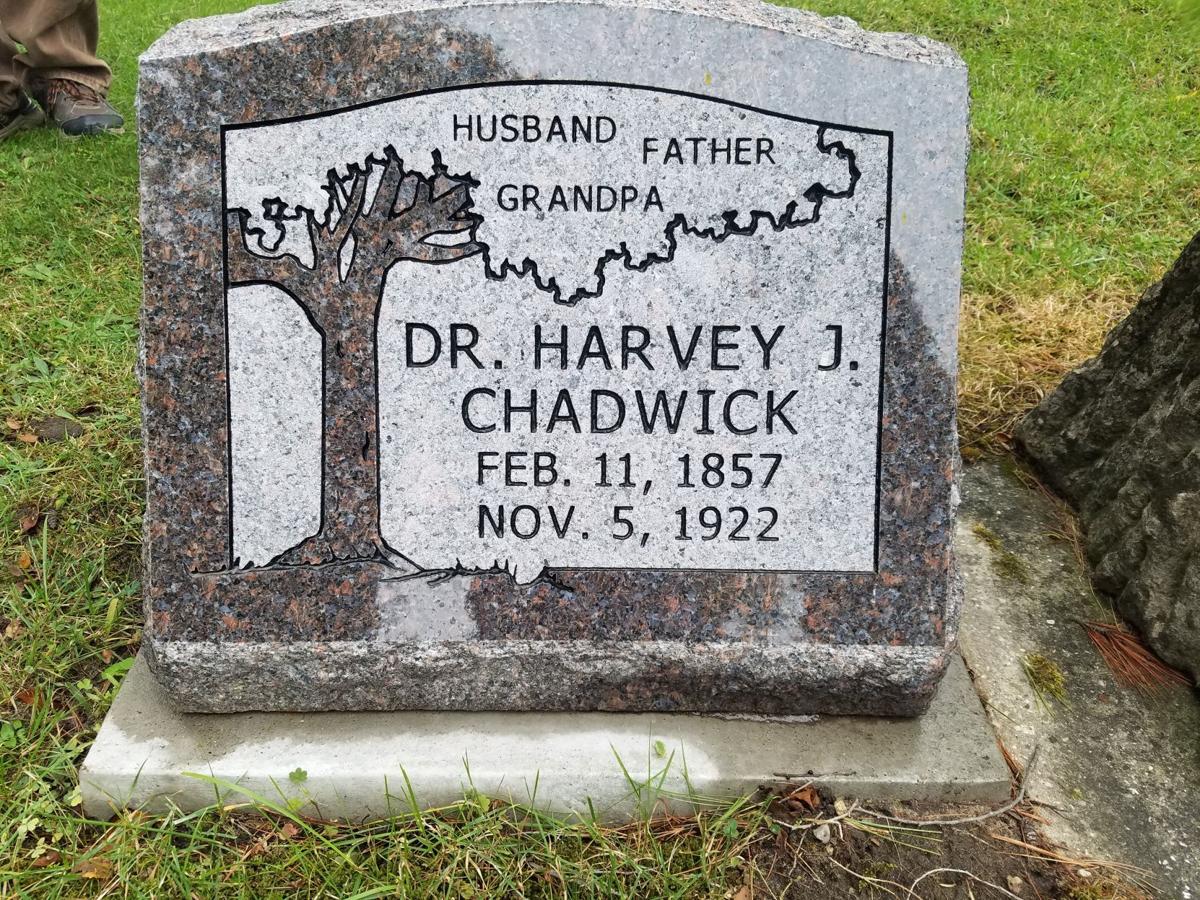 A few members of the Oceana County Historical and Genealogical Society (OCHGS) were present Wednesday, Sept. 9, when the great-granddaughter of Hart icon, Dr. Harvey J. Chadwick, Kathleen (McLenithan) Longcore, of Waterford, Mich., visited the Hart Cemetery to commemorate the placement of her great-grandfather’s gravestone. Chadwick (1857-1922) practiced as a physician in Hart for about 12 years in the late 1800s and forever became a part of the rich history of Oceana County. Longcore began her presentation with the singing of a song and the recitation of two brief prayers before sharing how the Chadwick family had come to settle in Hart.

“In 1868, at age 11, my great-grandfather moved from Indiana to Hart with his family. His father, my great-great-grandfather, Dr. Michael R. Chadwick, wanted to be a part of Hart’s expansion. He came with the idea of purchasing land, which he eventually divided and sold in smaller lots. He also began a medical practice and drug store in downtown Hart. My great-grandfather, Harvey, and his brother Ira both worked in the family’s drug store and at their father’s doctor’s office. Harvey became determined to go to medical school and get a degree. After medical school he returned home and taught school until he was established enough to set up his medical practice and marry the love of his life, fellow school teacher, Laura Teeple. Their oldest daughter Eva was my grandmother. They also had a daughter Zela and a son, Jenner Harvey, whose name was the reverse of my great-grandfather’s name.”

According to the book “The Story of a House”, written by Longcore in 1986, in cooperation with the OCHGS, Longcore said, “While the family lived in Hart, they built several homes, each one grander than the last. The last one is the beautiful stone structure on the corner of Dryden and Lincoln Streets (proudly now the home of the OCHGS). Chadwick had the home built in 1892 using local stone mason, George Dennison, whose technique involved cutting the stones into a rectangular shape. The Hart Journal reported on March 2, 1894 ‘Dr. Chadwick is now to be congratulated with his new boy and an elegant stone mansion. With the reputation and practice second to none, he certainly has the world by the horns.’ By the end of 1894, in search of greater opportunities for his family, Chadwick had moved his family to Grand Rapids where he set up his practice in downtown Grand Rapids in the Porter building on the corner of Monroe Street and Division Avenue.”

Longcore continued, “In April of 1900 his wife Laura died of pneumonia. Prior to the invention of antibiotics, it must have been very difficult not to be able to help her. Several years later, after his children were grown, he remarried the Dutch woman who had been his nurse and housekeeper when the children were small. The family later moved from Grand Rapids to Grand Junction where my great-grandfather had a country doctor practice, calling on patients with his horse and buggy. Suffering from diabetes and heart problems, he died November 5, 1922. Insulin was developed just two months later in January of 1923. I never knew my great-grandfather, He died almost 100 years ago. I only know him from pictures. But his obituary states that there was a committal and he was buried in the Hart cemetery, however there was never any official gravestone placed.” The family plot holds the “Chadwick” family stone as well as stones for Chadwick’s first wife Laura Teeple Chadwick and Chadwick’s mother, Caroline Chadwick . “Doing this has been on my bucket list for a long time. I felt it was something I could do for the family. It’s nice to finally check it off. It took some time to convince people that he was in fact buried here. Official burial records were never found. There was a flood at one time in the room where those records were kept. What it came down to was, we have his obituary, there was an empty space next to where his first wife was buried and a probe by cemetery personnel did not locate any type of vault in that area, so they allowed us to place the stone.”

Those wanting to know more about the Chadwick family, or any other with roots in Oceana County, are invited to visit the OCHGS any Wednesday from 10 a.m. to 5 p.m. The Chadwick-Munger House is located on the corner of Dryden and Lincoln Streets in Hart and can be reached by phone at 231-873-2600 or via email at info@oceanahistory.org