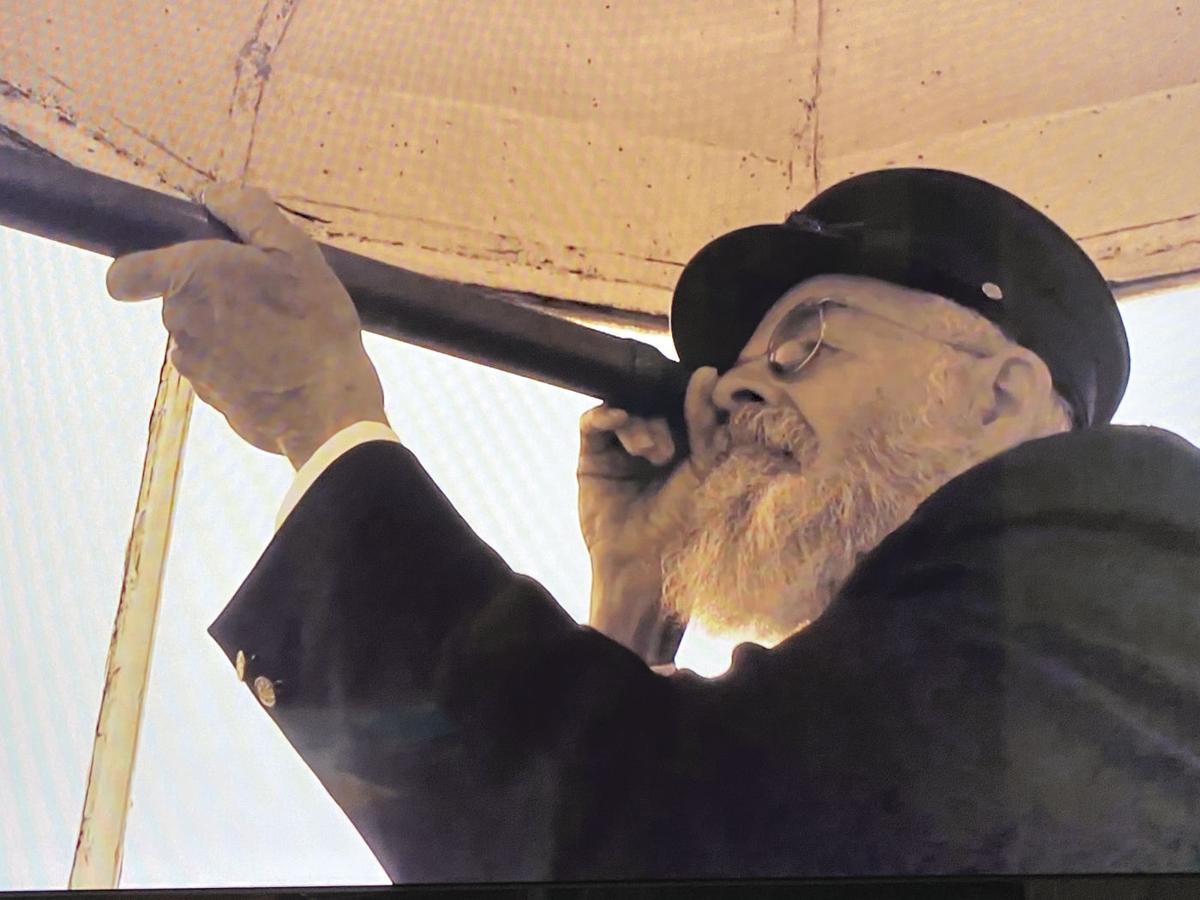 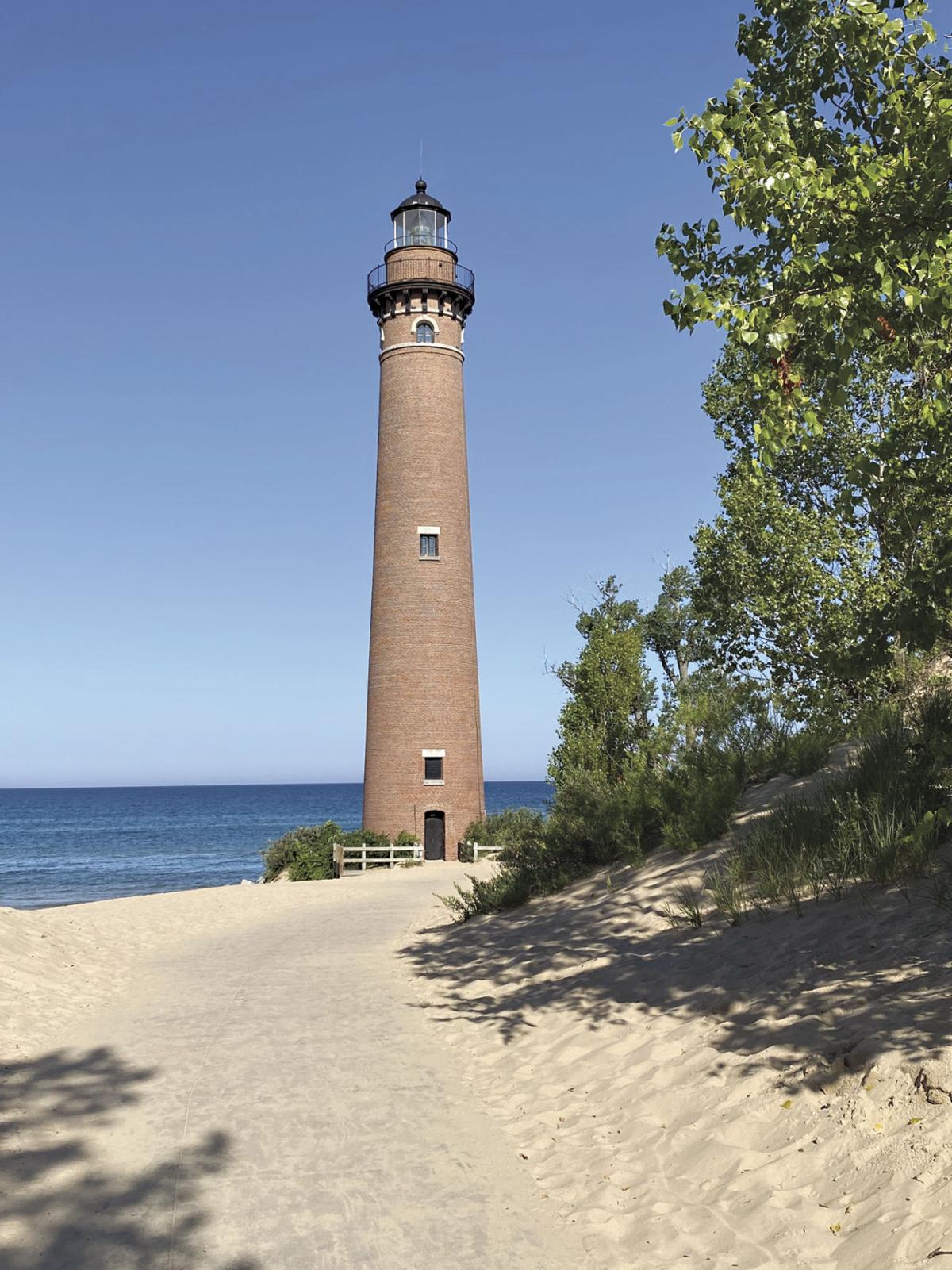 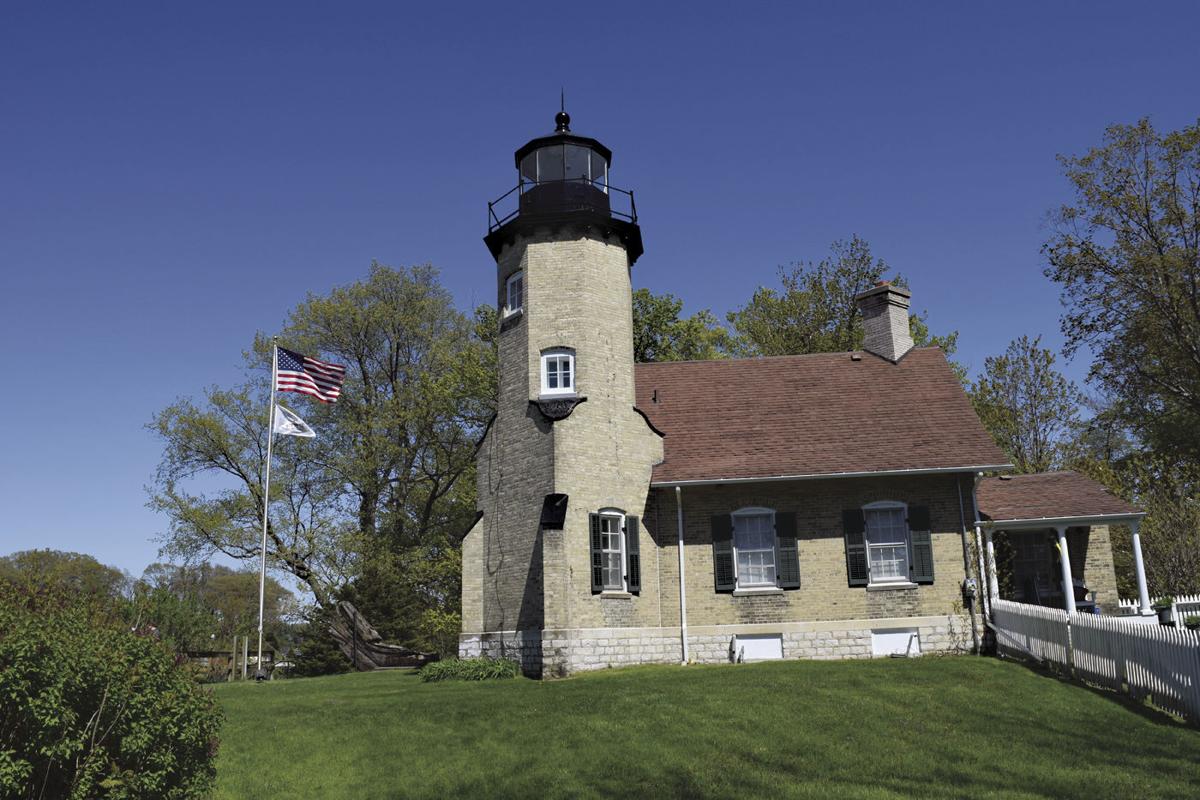 When David Dietrich climbs the winding 130-step cast iron filigree staircase to the top of the Little Sable Lighthouse wearing his visor lighthouse keeper’s cap and navy blue blazer with the shiny brass buttons, he is walking in the footsteps of his ancestors. Standing at the rail with his binoculars, searching for freighters plying the waters and the wind whips up waves on Lake Michigan, he can imagine his great-great grandfather, great grandfather, two great-great uncles and one great uncle- all Great Lakes Lighthouse keepers- keeping watch.

Dave, and his first wife May, learned of opportunities to be volunteer lighthouse keepers at Big Sable through an article which they read in the Lighthouse Digest Magazine back in 2002. For Dave, a retired CAD designer from suburban Western-Springs, Ill. this rare opportunity to explore his heritage was an energizing experience. “The first day I was at the top of Big Sable in 2002 I was bonding with the tower. It was a good day.” Dave admits that he has studied the history of both Big Sable and Little Sable and has committed the histories to memory. In his years of volunteering Dave has become a polished guide to his own surprise and delight. “I had never done anything like that. Talking in front of 6, 7 and 8 year-olds I am able to stand there and hold their attention telling them about lighthouse keepers and life at the lighthouse.”

Dave admits to coming to an interest in lighthouses and his own family history late in life. His grandmother, Elise Davenport Dietrich, raised in lighthouses in Wisconsin and Illinois, died in 1956, when Dave was 15. “She didn’t talk about living in a lighthouse. It wasn’t romanticized like it is now. It was just another occupation.”

He wishes he had now drawn her out on the subject, but he had no interest at the time, although he grew up near Lake Michigan, in Chicago’s South Shore neighborhood, not far from the Calumet Pierhead Light in South Chicago (demolished in 1996) where his grandmother lived as a child.

May Dietrich played a role in reviving her husband’s interest in his heritage. After retiring as a special education teacher in 1987, she immersed herself in genealogy, compiling her own family history and David’s as well. David’s great-great grandfather, Ambrose Davenport Jr., of Mackinac Island, a sometime lighthouse keeper, had three sons and a grandson who made their careers as lighthouse keepers and a daughter who married a lighthouse keeper. Dave learned that James Davenport, the first lighthouse keeper assigned to the Little Sable Lighthouse from 1873 to 1879, was his great-great uncle.

May sparked his interest in the uniforms worn by lighthouse keepers when she bought him a keepers-cap. That inspired him to decorate an old blazer with brass buttons, lapel insignia and efficiency pin awarded to keepers who excelled during the semi-annual inspections.

In 2002 David, dressed in his keeper uniform along with fake beard, showed up for his first tour at Big Sable. Ever since that first experience Dave has been very active and supportive of SPLKA and its efforts to preserve history.

May passed away in 2009 yet David continued to be active with SPLKA. His love for the lighthouses and the echoes of his ancestors continue to call to him. Dave proposed to his second wife Mary Jo on top of the Little Sable Lighthouse. Their wedding cake was in the shape of the Little Sable Tower. According to Mary Jo “it kind of had to be propped up as it started leaning during the reception.”

David has been active as a volunteer keeper, a day keeper at White River and Little Sable, a SPLKA Board member and is treasurer of the local group called “Seekers of the Little Sable Lighthouse.”

David and Mary Jo were the featured speakers for SPLKA’s 2016 annual dinner. David has put together a wonderful program telling the history and stories of the Davenport family and the many lighthouses in which they served, all located, on Lake Michigan.

During the 2017 Lighthouse Festival bus day, David, dressed in his keeper uniform, entertained those waiting in line, for the bus ride out to Big Sable. His lighthouse stories and facts made the up to 70-minute wait bearable for the summer guests.

David is featured in two short films done to enhance both the visitor experience at the White River Light Station and on the Sable Point Lighthouse Keepers Association website. Both videos are available for viewing on the SPLKA website. www.splka.org

On days that the Dietrich’s are on duty at Little Sable, visitors will meet Mary Jo, dressed in period women’s clothing, at the base of the tower and then meet David, in his uniform and real beard, at the top of the tower.

David promotes SPLKA’s volunteer keeper program to whomever he meets. He lets it be known that “the volunteer keepers today don’t do the work like they used to. Hauling fuel up the stairs, tending the wick, cleaning the soot from the lens and adjusting the airflow to keep the light burning. But as a volunteer you get a feel for what it was like to walk the tower, to hear the wind out there. At night, at Big Sable, it is creaky, and when you hear the wind blow through the windows, it can conjure up the ghost stories you have heard. It is a wonderful experience.”

The Sable Points Lighthouse Keepers Association welcomes over 400 volunteers to help keep the four lighthouses open in the summer to the public. SPLKA is still looking for volunteers to fill the position of Day Keepers at the Little Sable Point Lighthouse, the White River Light Station and the Ludington North Breakwater lighthouse. SPLKA also has several 2021 openings for week long keeper positions at both the Little Sable Point Lighthouse and the Ludington North Breakwater.

For more information, contact operations manager Rachel Bendele at the SPLKA office 231-845-7417, email splkaoperations@gmail.com or go to the website www.splka.org and click on the membership tab to find out information on membership and volunteering.