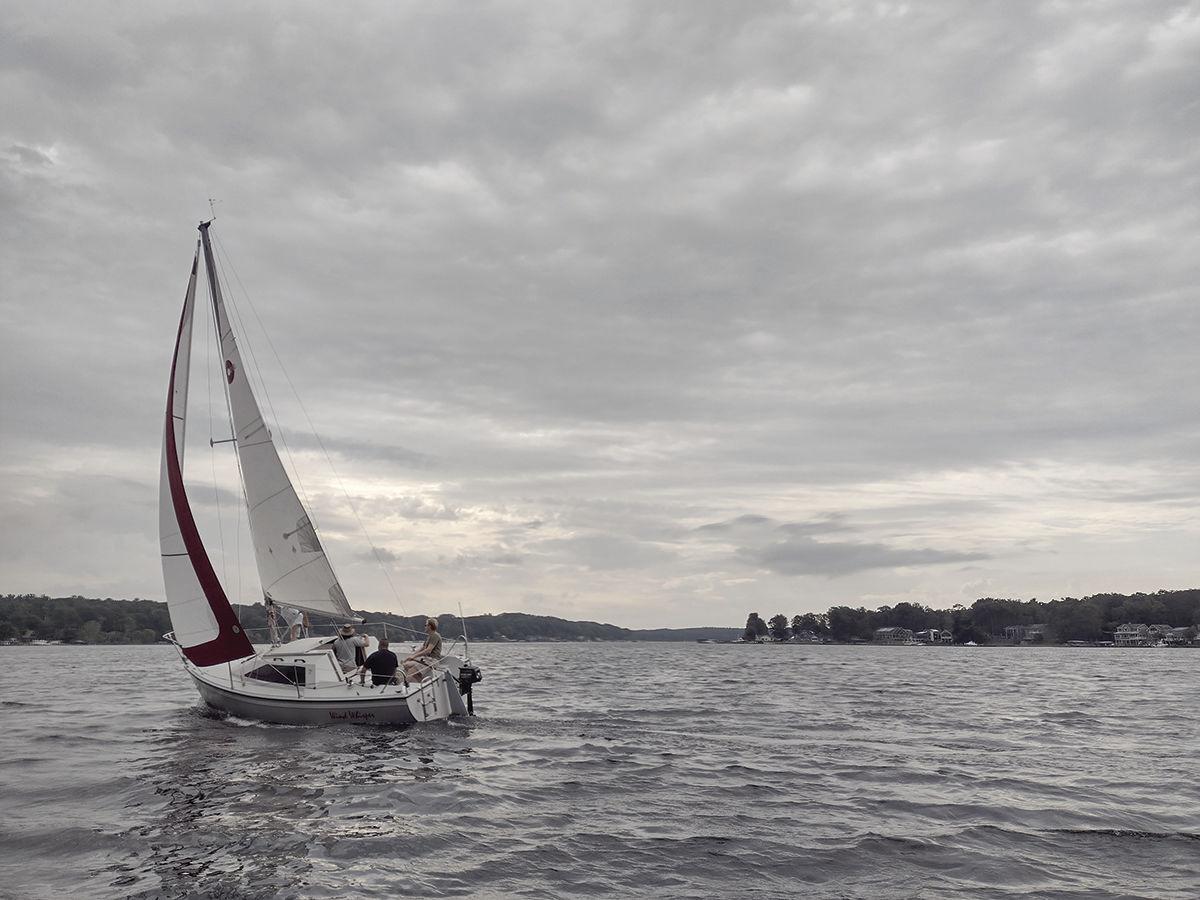 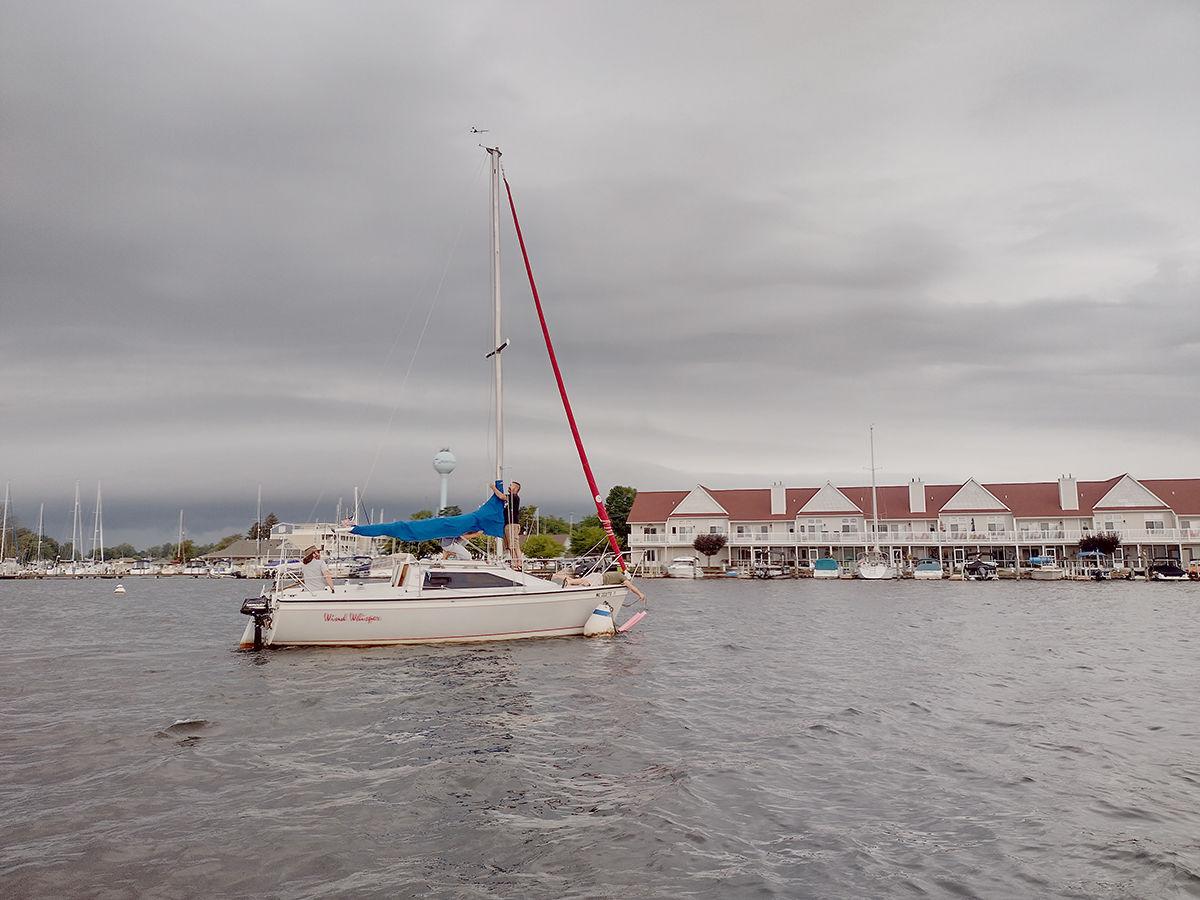 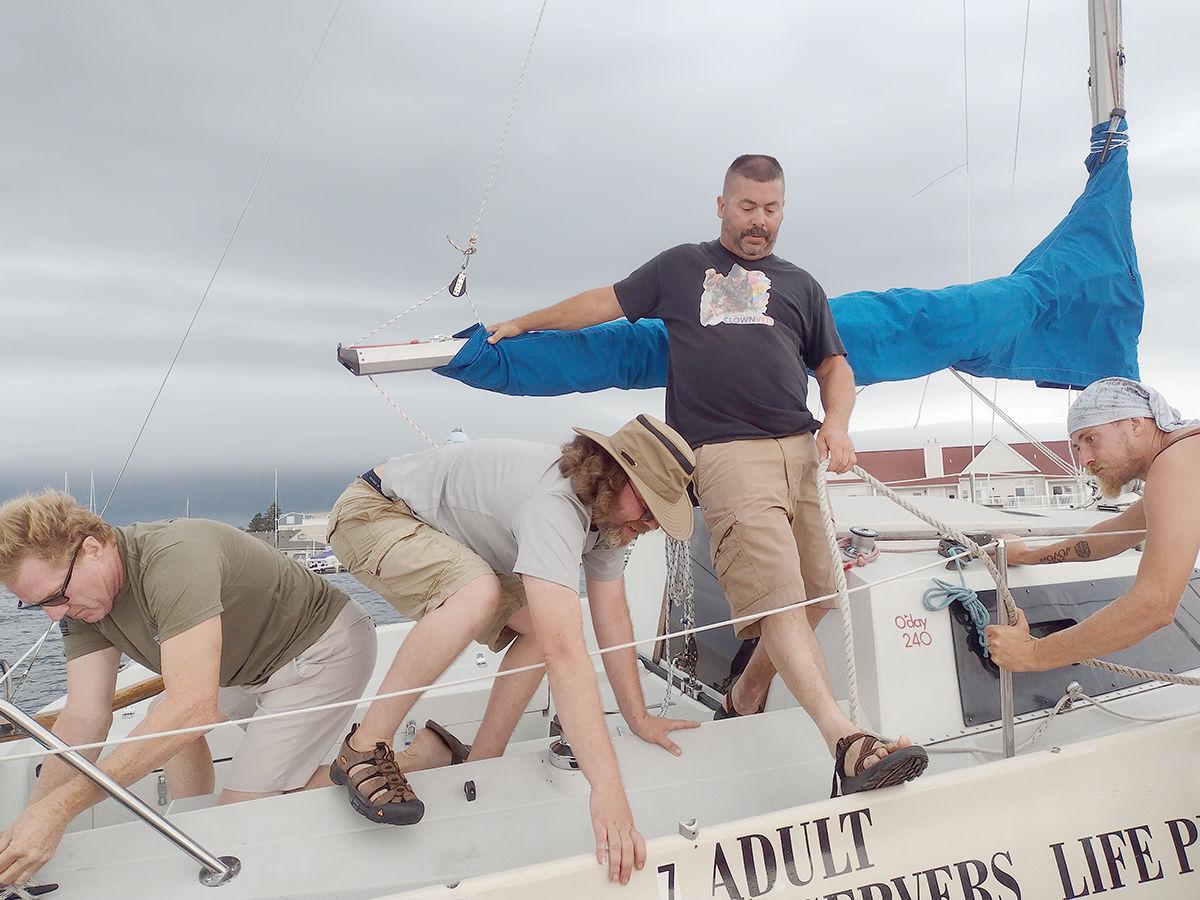 A group of veterans met in a conference room of the Centenary United Methodist Church in Pentwater on the morning of Aug. 27 for the final class of a Basic Keelboat Sailing course offered by the West Michigan SAIL program. West Michigan SAIL, which stands for Servicemembers Adapting Interacting Living, is a nonprofit organization started by Lee Price and other dedicated locals that is meant to aid veterans suffering from disabilities such as Post Traumatic Stress Disorder (PTSD), Traumatic Brain Injury or physical disabilities. They aim to do this by offering free sailing courses. The class that met that Friday was the final class of the nonprofit’s debut course and it was a huge success. With two sailboats being water ready and a crew of four per boat (three veterans and one instructor), the course was at capacity with six veterans.

“For this class, with the instructors Lee and Chad… I think they’re the perfect guys to help veterans with PTSD, Traumatic Brain Injuries or physical disabilities. They have the patience that it’s going to take,” Russ Mason said of the course. Mason is a veteran from Silver Lake who spent 33 years with the US Navy, working in the Submarine division. He actually grew up on a sailboat and sailing has been a passion of his, despite never getting to do it during his time in the Navy. When asked whether he found the sailing course beneficial he said, “Absolutely,” and added, “the camaraderie, the military joking around, and just having fun in a teamwork environment was really beneficial to my therapy.”

Mason is not the only vet in the course with prior sailboat experience though. Nathaniel Mohr, affectionately referred to as “Pirate Nate,” served for two years in the Air Force and has actually been living on a sailboat full-time since April. Mohr showed up for the class dressed appropriately in a bandana and sandals. He also had with him his therapy dog, Studly, a small terrier breed who was tethered to a boat cleat bolted to a piece of wood during the duration of the lesson, which is one more example of the accommodations that the instructors are willing to make so that their vets feel as comfortable as possible. Mohr sailed his boat over to Pentwater from Ludington while he attended the classes, but just because he sails already, that doesn’t mean there wasn’t anything for him to gain from the course. “It’s just so incredibly valuable to me personally, being a sailor. Now I have a feel for the technical aspect,” Mohr said. He also said, “It’s incredible to sail with relatively like minded people. We’re all learning and operating together. It feels good to be part of a team again to be honest.”

Meanwhile, Herb Merten, who served in both the Marines and the Michigan Army National Guard, had absolutely no prior sailing experience before taking the course. He says the course has been awesome and describes the sensation of sailing as “being free.” Merten also talked about community building enterprises of a course like this. “This whole experience has brought me closer,” Merten said, “I’ve known Russ since the 1980s, but it was only by name. In this class we’ve talked a lot, laughed a lot and it’s been good.”

The basic keelboat sailing classes were divided into two halves. First the veterans would study material from the textbook and then they would get some hands-on experience with a boat, so that they could apply what they had learned. Friday was no different. After taking a quiz to review everything they had learned over the previous week, the student sailors took a boat called Wind Whisper out on Pentwater Lake, although they had to turn in early due to poor weather. Sailing with them was Chad Sampson, one of the course instructors who met Lee Price in 2019, when Price started his water taxi service on Pentwater Lake. Although both of them have several years of teaching experience when it comes to sailing, they also took an Adaptive Sailing Class in preparation for the program, so they could better facilitate handicapped learners.

Initially, it was thought that this might be the only class the program is able to host this year, but it has been such a big hit with those enrolled, they have already assembled a large list of interested veterans for another class in the spring. “Our goal is to have five boats operating in the spring,” Price said, “And we should be able to have three veterans per boat, so our classes will be 15 veterans each week.” They also plan to add other courses, including performance courses for sailboat racing, cruising classes and instructor courses. “I’m going after my instructor’s certification next,” Mason said, “because I want to come aboard this team next spring and start instructing. This is the first thing I’ve come across in my two years of retirement so far that I can really sink my teeth into.”

One of Price’s chief concerns is that these classes remain accessible to the veterans and he is determined to never charge them a fee. Instead, West Michigan SAIL will generate funds through grants and fundraisers, as well as offering services to the general public, such as sunset cruises on Pentwater Lake. This year’s class was made possible by a grant from Great Lakes Energy, the generosity of which has made a huge impact on the lives of six local vets in our community.