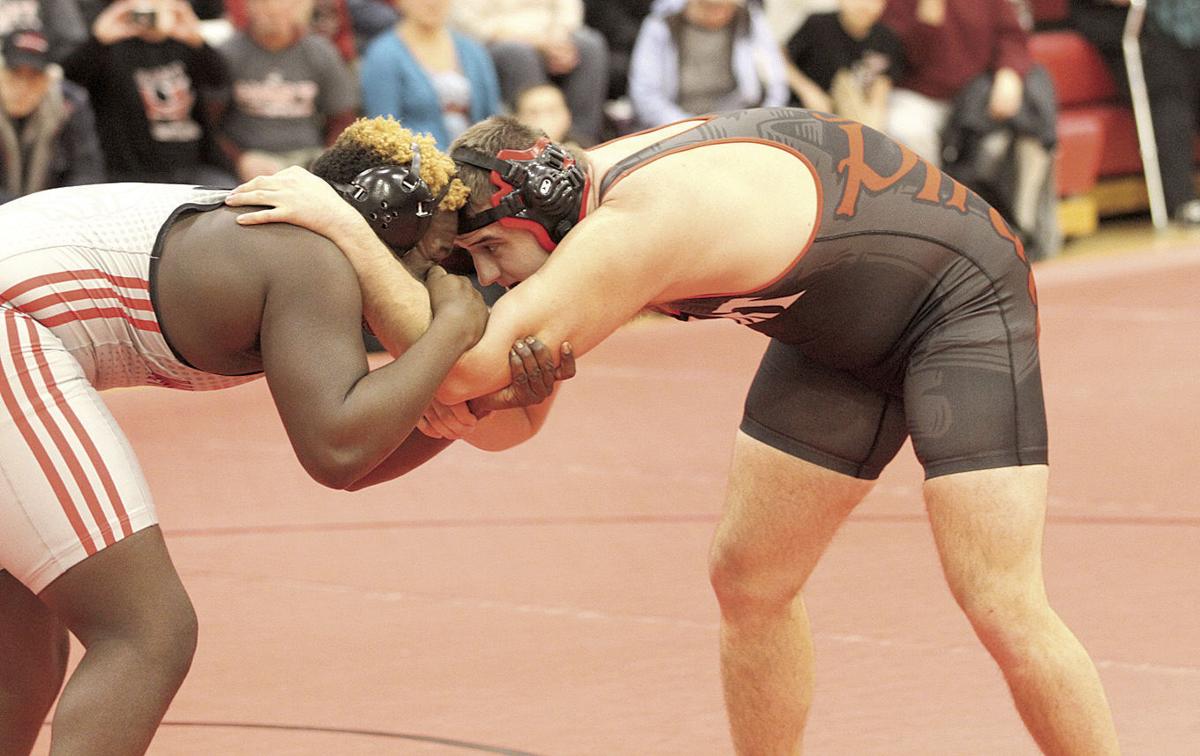 Hart's Tanner Breitwisch (right) and Whitehall's Jarrean Sargent feel each other out early in a match at January's Hart Quad. Wrestling might be the winter sport most affected by COVID-19 precautions this year. 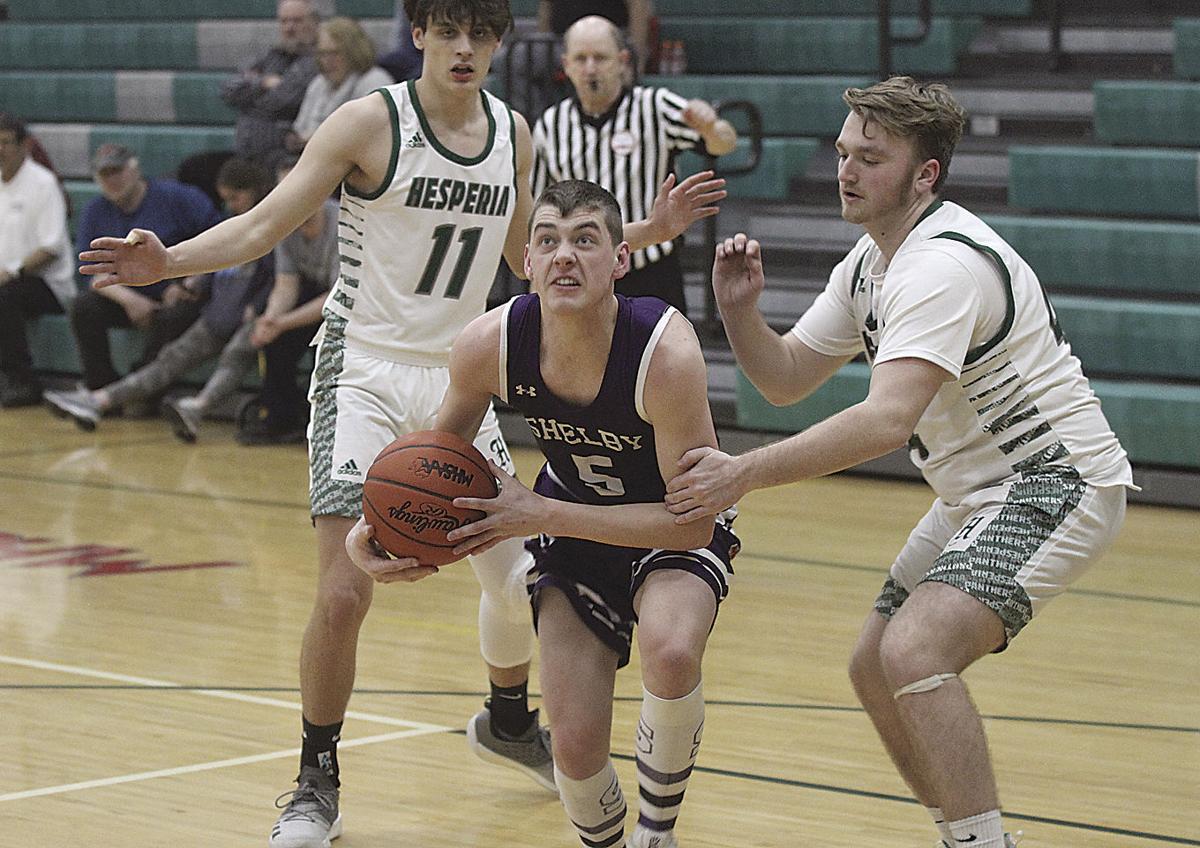 Shelby’s Jarrett Furman (center) drives to the basket as Hesperia’s Kaiden Robbins (11) and River Montague defend during a March game at Hesperia. The basketball season will be affected by the COVID-19 pause.

Hart's Tanner Breitwisch (right) and Whitehall's Jarrean Sargent feel each other out early in a match at January's Hart Quad. Wrestling might be the winter sport most affected by COVID-19 precautions this year.

Shelby’s Jarrett Furman (center) drives to the basket as Hesperia’s Kaiden Robbins (11) and River Montague defend during a March game at Hesperia. The basketball season will be affected by the COVID-19 pause.

Fall sports tournaments are about to resume in Michigan thanks to a pilot testing program for COVID-19, but winter sports remain sidelined as of now due to the Michigan Department of Health and Human Services (MDHHS) pausing sports action. The pause is currently slated to last through Jan. 15, and the first day of allowed winter sports competition is scheduled for Jan. 22, pending further adjustments.

The winter sports were not included in the pilot program, and despite the MHSAA’s best efforts, they were not granted an exemption when Michigan’s Department of Health and Human Services (MDHHS) extended the statewide ban on organized indoor sports through Jan. 15.

Winter sports were already facing scheduling difficulties as it was, after pushing the beginning of competition into the new year. With the additional three weeks added to the pause, a decent portion of the regular season calendar for basketball, wrestling and cheer has now been wiped out.

The logic is sound enough — state officials want to see if current restrictions can stem the tide of COVID-19. The state has already seen a decline in cases since enacting the restrictions, which began in mid-November.

Uyl said the MHSAA is optimistic, based on what they’ve heard from state officials, that if COVID-19 cases continue to decline, restrictions may be lifted earlier than Jan. 15, but whenever they are lifted, the plan is to get winter sports started.

While a plan has not been released, to comply with its own restrictions, the MHSAA will have to change the individual wrestling tournament. The MHSAA has restricted competition to twice per week during the season, with no more than four schools permitted at a site. The individual tournaments, of course, bring far more than that many schools together, and with many wrestlers competing more than three times in a day to boot.

Shelby athletic director Chuck Persenaire said the restrictions on wrestling in particular make it difficult to evaluate what sort of season that sport will end up having.

“My wrestling coach (Dustin Dean) and I were talking about, before the extension (through Jan. 15), wrestling was going to have four dates and then the tournament, and now it’s, what do we think we’re going to do now?” Persenaire said. “I don’t want to forecast that because I’m probably going to be wrong again...If I remember correctly, I think we’ve redone our conference wrestling schedule at least three times, and maybe four, as things have changed since November.”

And while wrestling is clearly the sport most in jeopardy because of its heightened danger of spreading the virus and the constrained timeline it faces, the other sports — basketball and cheer — also remain in what Persenaire called a “hurry up and wait” posture.

“All winter sport balls are up in the air,” Persenaire said. “That’s probably the most difficult part right now, is you just don’t know. Everything has been paused, and it’s been pushed back. I get several calls from coaches, parents and players, and I try to update them as much as I can on a regular basis. I send emails out to my coaches at least once a week, but it’s basically saying the same thing. I don’t know what’s going to happen going forward.”

One scheduling complication that the casual fan might not think about is the difficulty of getting basketball officials together, especially if the season ends up being a six-week sprint. The middle school basketball seasons, which take place in the late fall, were in the middle of their runs when the pause was enacted, and will need to be completed in the winter. Many of the officials who work games are involved at both levels of basketball, so that will create further scheduling problems.

“In the WMC, we kind of have two winter (middle school) seasons — boys basketball and competitive cheer, and wrestling and volleyball,” Persenaire said. “We can’t get basketball and cheer extended too long or we’ll get into those (high school) seasons. Part of the reason we run basketball when we run it, (is) we have a shortage of officials at that time. So now we’re competing for those officials.”

Persenaire, who coaches middle school basketball at Shelby, fortunately was able to talk with his players face to face about different activities he wants his players to do because the MDHHS pause, which originally sent high schools to virtual learning, did not do the same with middle school students. That’s still no substitute for actually getting together for practice, though.

Hesperia’s AD, Jeff Knapp, said that during the pause, his focus has been making sure the varsity coaches stay in touch with their players, as much for their mental health as anything.

“(My focus has been) for the coaches to continue to reach out to the kids, who are essentially the victims in this situation, just to maintain those relationships as much as possible and for those kids to keep getting after it however they can,” Knapp said.

Knapp added that he believes a winter season will take place in some form, and with the various COVID-19 vaccines now being rolled out, he’s hopeful the coronavirus case numbers will continue to decline as they have over the past six weeks.

“These kids are going to have a piece of a season,” Knapp said. “I think they’d have a better chance of completing their seasons if we’re able to turn the corner on this second wave of the virus, and with the vaccine, that stuff will make me optimistic it will get better and not worse.”