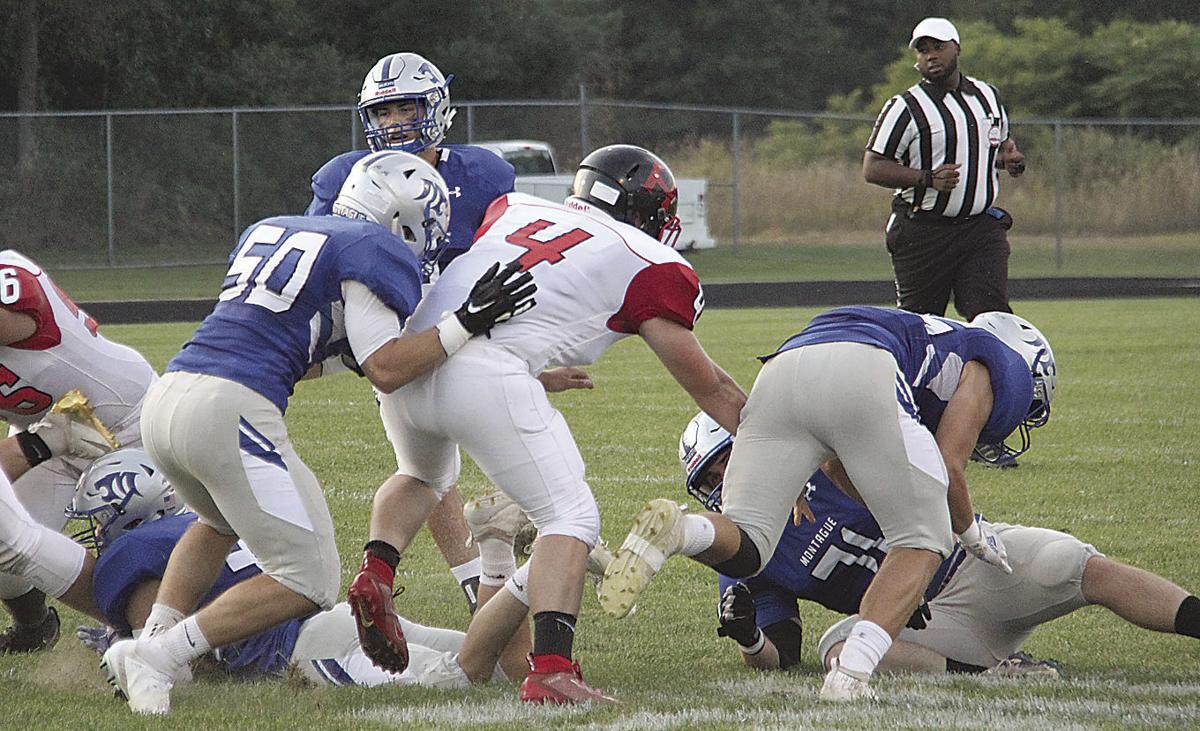 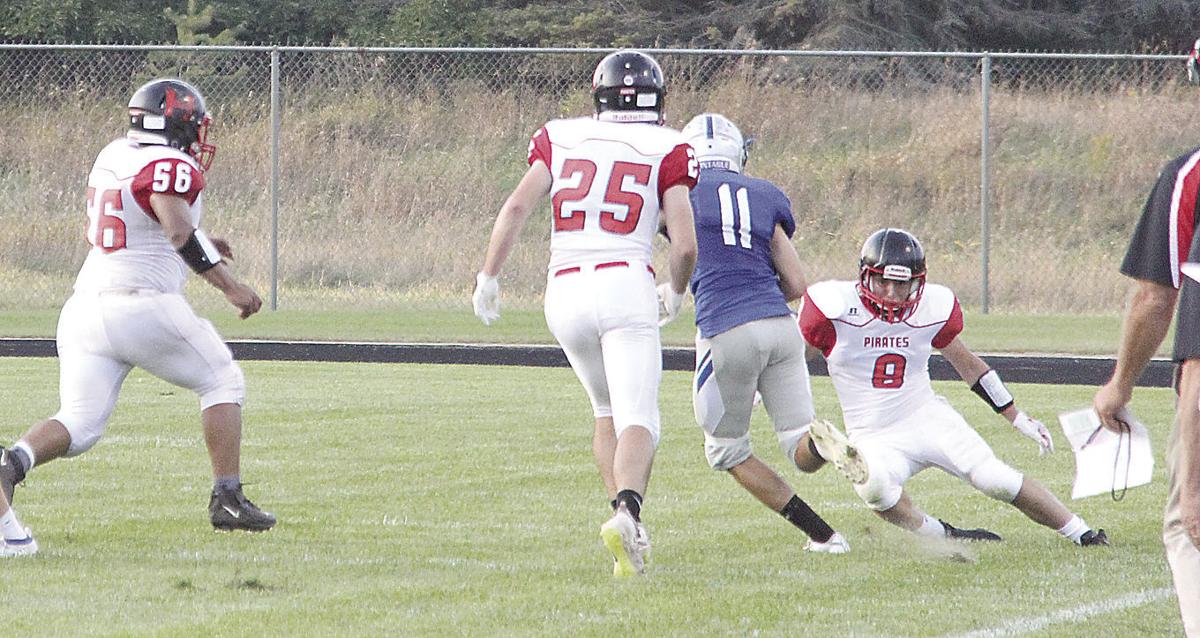 Hart’s Delfino Hernandez (8) tries in vain to stop Montague’s Logan Metcalf during Friday’s WMC football game at Montague. The Pirates’ Adal Zarzoza (56) and Ayden Beachum are also in on the play. Hart lost, 64-6. 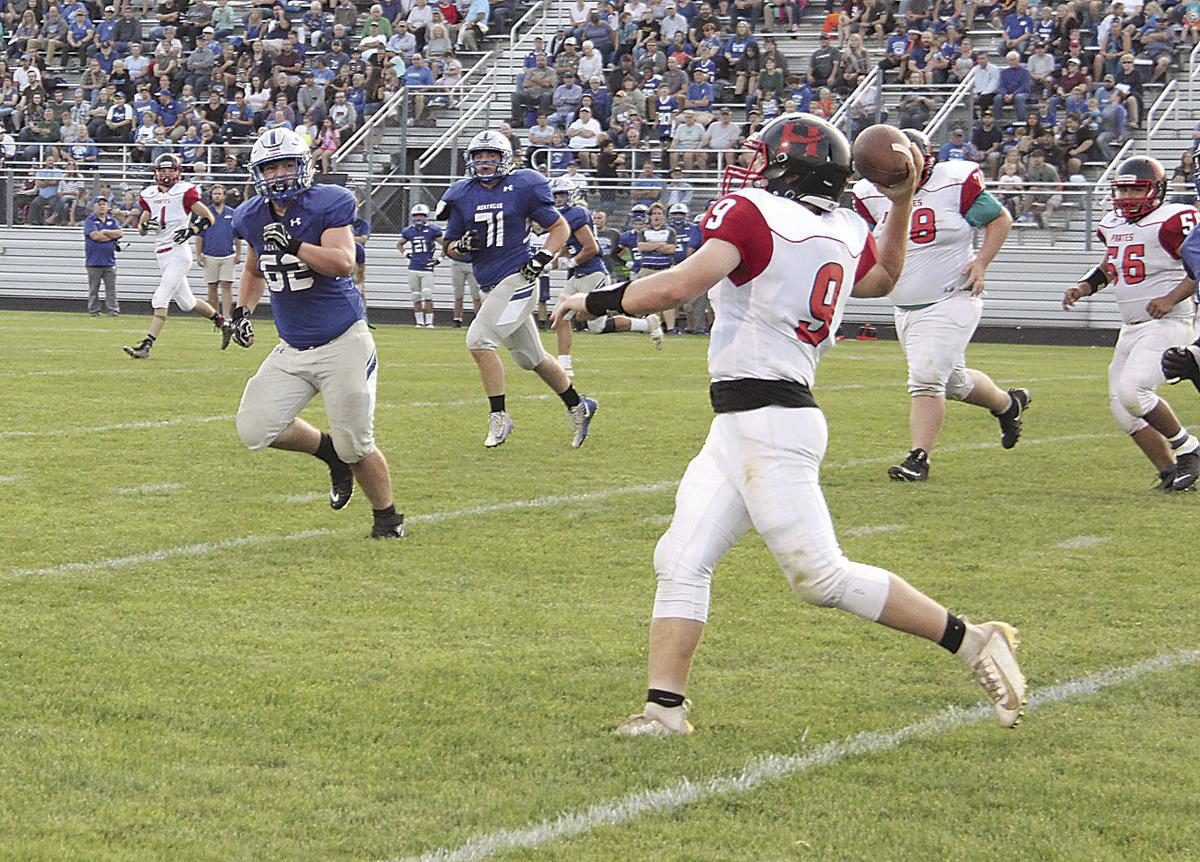 Hart and Montague line up for a snap during Friday’s WMC football game at Montague. The Wildcats beat the Pirates, 64-6.

Hart’s Delfino Hernandez (8) tries in vain to stop Montague’s Logan Metcalf during Friday’s WMC football game at Montague. The Pirates’ Adal Zarzoza (56) and Ayden Beachum are also in on the play. Hart lost, 64-6.

Hart and Montague line up for a snap during Friday’s WMC football game at Montague. The Wildcats beat the Pirates, 64-6.

Neither Hart nor Shelby had a fun time on the football field Friday, and all they can do is keep working as the season moves past the halfway point this week. Hesperia, meanwhile, hopes the week off White Cloud’s forfeit afforded it pays off this week with a trip to Lakeview for a key conference game.

Hart never had much of a chance Friday against Division 5 #1-ranked Montague, as the Wildcats piled up the touchdowns early en route to a 64-6 rout that knocked the Pirates to 1-3 (0-3 West Michigan Conference).

“Montague is just a hell of a football team,” Hart coach Rick Witteveen said. “For the most part, we worked hard all night. We just have to keep working and getting better with our technique and playing with a lower pad level.”

Hart was able to last the first half of the first quarter without surrendering a point, but Montague poured on four touchdowns and a safety in a 5:23 span of game time after that to go ahead 30-0. The Wildcats’ quarterback, Drew Collins, threw for 310 yards and four touchdowns, and Montague led 58-0 by halftime.

Although the result was not pretty, Witteveen said the team’s effort level was a step up from the previous couple of games.

“They’re finding out that you have to come with your A game week in and week out,” Witteveen said. “It doesn’t matter who it is. We have to go and compete at the highest level we can possibly compete at and see where we’re at and keep working to improve. The kids got away from that for a couple of weeks, but last week, for the most part, they worked hard.”

The Pirates will have a stern test this week with a visit from the North Muskegon Norsemen for homecoming. The Norsemen, who are led by running backs Collin Schotts and Stephan Smith as well as a good quarterback in John Hayhurst, beat Shelby Friday and have two losses by a combined five points to Ravenna and Montague, each currently unbeaten in the WMC.

“They’re five points away from being undefeated,” Witteveen said of the Norsemen. “They’re a very good football team. They’re physical. We have to continue to work and improve our technique. We have a big challenge in front of us this week.”

For the Pirates, the hope is that a week of hard work will equip them to deal with the challenges North Muskegon presents, and have a more successful Friday night than their last few.

“We challenged them to get back to playing the game the way they know how to, and that they should,” Witteveen said. “They worked harder at it this week. We’re a young team as far as experience goes. At times it shows...Hopefully they come in and go back to work and keep working to get better.”

Shelby’s offense hasn’t yet put it all together. Friday night, the Tigers had some success on the ground, but not in the air, a mirror image of the previous week’s contest, and they lost 56-0 to North Muskegon.

The Norsemen led 49-0 at halftime.

Statistically speaking, the night wasn’t a lost cause for Shelby (0-4, 0-3 WMC). Laz Madrigal had a solid night running the ball, gaining 98 yards on 21 carries. Jason Hubbard totaled nine yards on seven attempts, but coach Lorenzo Rodriguez felt he had a decent night as well.

However, the aerial improvements the Tigers had made the previous week were gone, as they did not complete a pass and threw three interceptions.

“It seemed like any time we had something going, something went wrong,” Rodriguez said. “We have to give the quarterback time to set his feet and throw the ball. That’s coming.

“We just have to get this thing balanced and rolling in the right direction.”

On defense, Xavier Wallace had eight tackles, but the Tigers struggled to contain the Norsemen’s impressive backs.

Still, from an effort and approach standpoint, Rodriguez said he’s pleased with his team.

“I’ll tell you what, I tip my hat to my kids,” Rodriguez said. “We stuck together and that shows team unity and the love of the game. It’s tough to love something when the score keeps climbing on their side of the scoreboard. I give my kids a ton of credit for coming out and keeping working. A lot of times in these situations you work harder than you ever have.”

More hard work will be necessary when Shelby hosts Whitehall this Friday. The Vikings are coming off consecutive losses to Oakridge and Ravenna and are dealing with a rash of injuries, including season-ending blows to their starting quarterback, Andrew Durbin, and all-state defensive back Kyler Honore. Still, even despite that, Whitehall pushed Ravenna into the fourth quarter last week before fading, so the Tigers shouldn’t expect an opponent ready to roll over for them.

“They have some quality athletes,” Rodriguez said. “From what I’m understanding, they’re starting to get some key players back. We have to come out and continue to execute and improve at every facet of the game.”

For the Tigers, getting something good started might be as simple as scoring some early points. Shelby has only 12 points through four weeks, just six in the first half.

“We just have to build some consistency,” Rodriguez said. “We’re starting to click up front. We made some moves to solidify things as far as blocking goes. I think we benefited from it...It just comes down to execution and sticking with the game plan.”

Hesperia improved to 2-2 and 2-0 in the Central State Activities Association Silver without taking a hit Friday, as White Cloud’s cancellation of its varsity season last month gave the Panthers a win by forfeit.

Next up is a trip to Lakeview, a team that has yet to win a game yet but played a tough one against CSAA Silver co-leader Morley-Stanwood a couple of weeks ago. (Lakeview, too, had the week off last Friday as Holton forfeited due to lack of healthy players.)

The Panthers will have revenge on their mind after the Wildcats ruined their homecoming last season with a 33-0 rout.

“We play on their homecoming this year and we’d love to return the favor,” Hesperia coach Doug Bolles said.

It won’t be easy, as Jacob Voelker is a tough opponent for the Wildcat offense. The quarterback totaled 230 yards of offense, including both Lakeview touchdowns, in the 20-12 defeat to Morley-Stanwood two Fridays ago. Luke O’Dell is a big-play threat on the edge, with a 50-yard catch in that game, and Garrett Grover-Adams complements Voelker in the backfield.

The week off has enabled Hesperia to get healthy. Bolles said they will dress 20 players for the varsity game, giving the team depth it hasn’t had in a couple of years.

“If we prepare all week like we did for Holton, we’ll be on track for another promising outcome,” Bolles said.