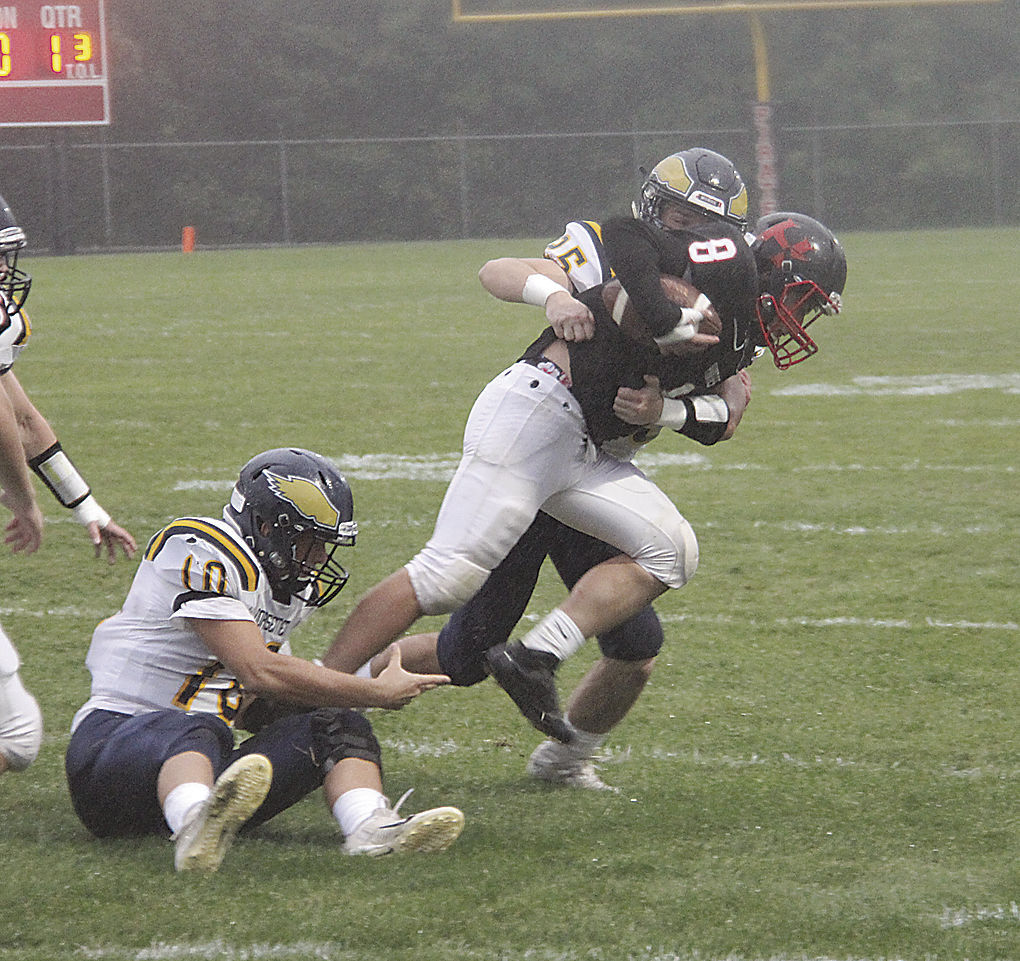 Hart’s Delfino Hernandez (8) is brought down by the North Muskegon defense during Friday’s WMC football game at Hart. The Pirates dropped the game, 49-0. 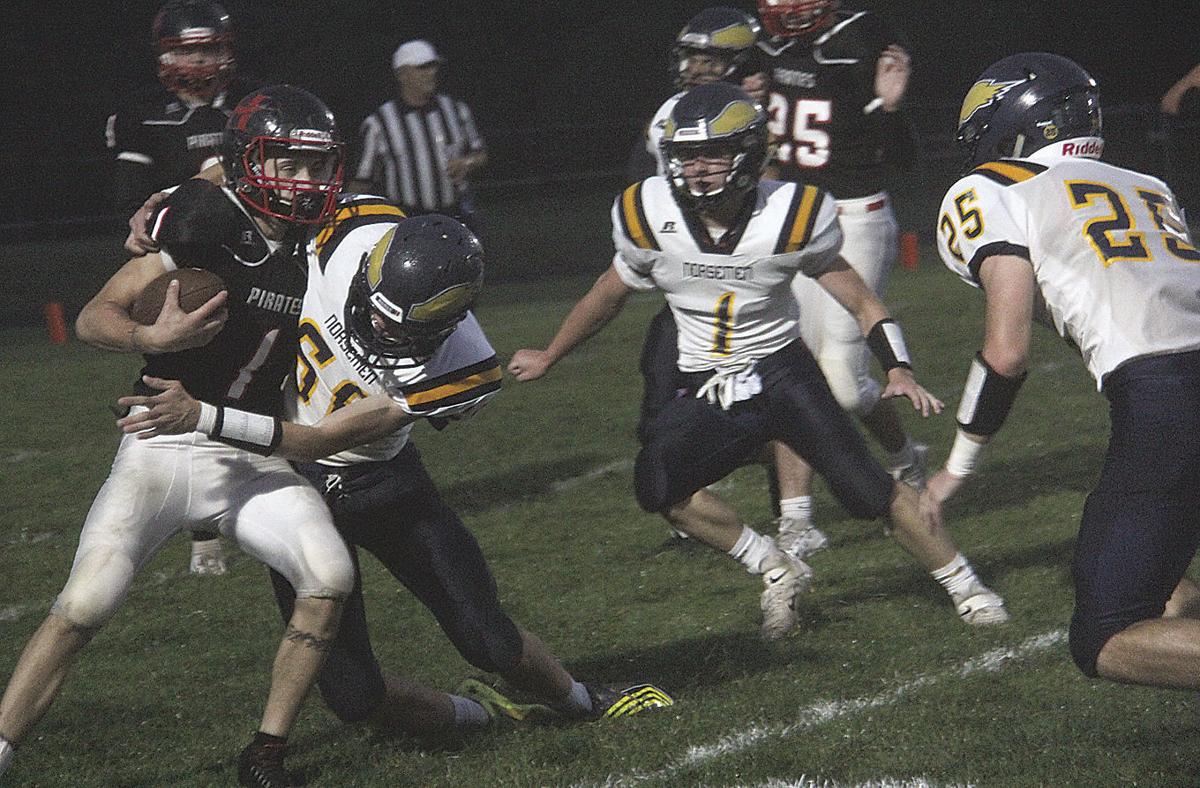 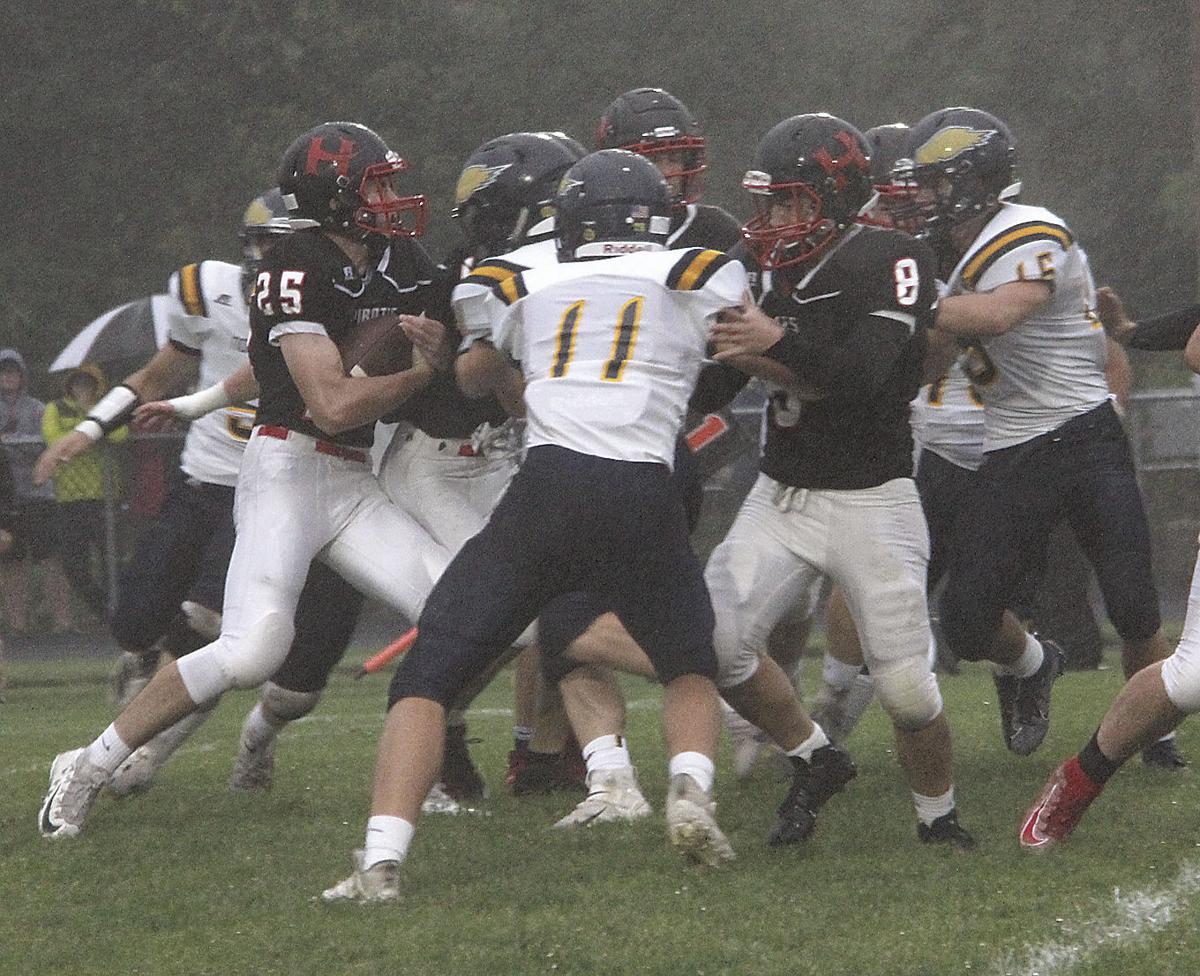 Hart’s Ayden Beachum (25) tries to bull into a crowded line of scrimmage during Friday’s WMC football game against North Muskegon. Hart lost to the Norsemen, 49-0. 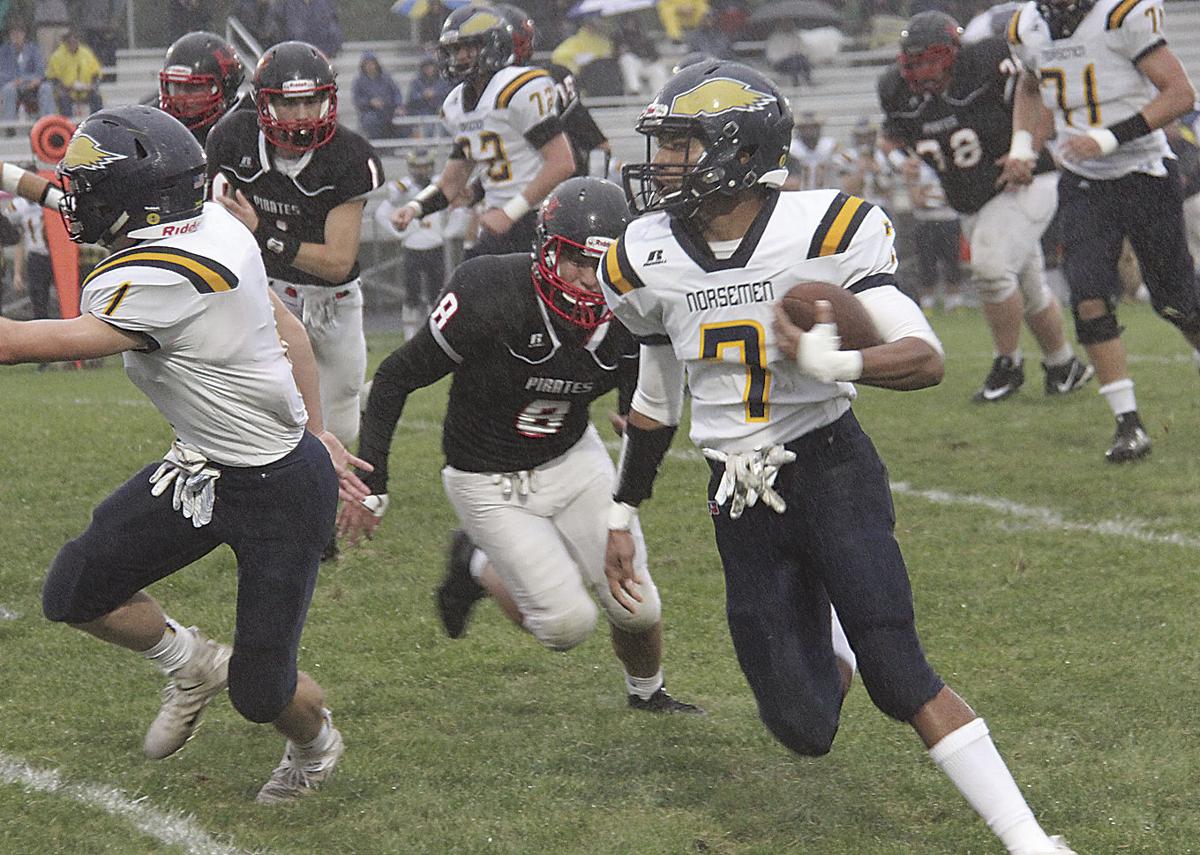 Hart’s Delfino Hernandez (8) tries to chase down North Muskegon’s Stephan Smith during Friday night’s football game at Hart. The Norsemen were too much for the Pirates in a 49-0 game.

Hart’s Delfino Hernandez (8) is brought down by the North Muskegon defense during Friday’s WMC football game at Hart. The Pirates dropped the game, 49-0.

Hart’s Ayden Beachum (25) tries to bull into a crowded line of scrimmage during Friday’s WMC football game against North Muskegon. Hart lost to the Norsemen, 49-0.

Hart’s Delfino Hernandez (8) tries to chase down North Muskegon’s Stephan Smith during Friday night’s football game at Hart. The Norsemen were too much for the Pirates in a 49-0 game.

Week five was another rough one for Oceana teams, as all three took losses. Hesperia’s might have been the most painful, not because of the score but because of the toll it took.

The Panthers lost starting quarterback Logan Balkema to an ankle injury early in a 24-8 loss to Lakeview, setting the Panthers back heading into this week’s battle with a tough Kent City team.

Hart and Shelby continue to search for the right combination to deliver a West Michigan Conference victory, but it won’t be easy as each faces a difficult road tilt this week.

Hart coach Rick Witteveen liked the effort his team gave in a 49-0 loss to North Muskegon Friday in the homecoming game.

However, effort paired with sloppy technique won’t win football games, and he’s hoping his team can improve in the fundamental things it needs to in order to come away with wins.

“The kids gave effort all night long,” Witteveen said. “They never quit...We’re still struggling with Basic techniques. I approached them with that after I told them I was proud of them for playing hard all night. We have to utilize the techniques that we work hard on all the time.”

The visiting Norsemen had 35 first-half points in Friday’s game, and scored four times from 25 or more yards away. Stephan Smith paved the way for North Muskegon with 112 yards rushing, and Collin Schotts had 86.

“With the rain, we figured they’d run more than throw, and we just didn’t tackle well, which we haven’t all year,” Witteveen said. “If you don’t tackle well, bad things happen.”

Braeden Carskadon had 65 yards through the air, but the Pirates (1-5, 0-4 WMC) were intercepted by Norsemen quarterback/defensive back John Hayhurst during the game as well.

The Pirates face about as imposing a matchup as possible in week six, as they have to travel south to face Oakridge. The Eagles are coming off their biggest win of the year, a 15-13 overtime triumph at Montague, and sit at a perfect 5-0 mark on the season.

Leroy Quinn is the clear leader for the Eagles, and he scored both of the team’s touchdowns in last week’s win. He’s also a key factor on the Eagle defense, along with Josh Havermans.

Oakridge is unmistakably talented, but Witteveen said the Eagles’ focus on fundamental play is really what sets them apart.

“They’ve got one heck of a ball club, and well-coached,” Witteveen said. “I think very highly of Coach (Cary) Harger, and their staff does an excellent job. They preach the little things, and their kids buy in and carry them out.

“We just aren’t, for whatever reason, following through on the basic technique and fundamentals. We just have to push that, and hopefully more kids start using that.”

Witteveen said the effort Friday night was “a step in the right direction” but emphasized the team must improve its technique to win games.

“You can give 100 percent, but if you’re not utilizing proper technique, effort will only get you so far, if the other team is executing fundamentals and techniques better than you are,” Witteveen said.

Hesperia was optimistic heading into Saturday’s game at Lakeview (moved from Friday due to thunderstorms), but Logan Balkema’s injury set the Panthers back in a 24-8 loss.

Hesperia (2-3, 2-1 Central State Activities Association Silver) trailed 12-8 at the break despite Balkema leaving the game in the second quarter, but the Wildcats took full advantage of Balkema’s absence in the third with 12 unanswered points.

“Without his presence on both sides of the ball, (that) hurt us tremendously,” Hesperia coach Doug Bolles said. “Our team leader, our leading tackler and our catalyst, lost that early...Not making any excuses, (but) him being out is a huge loss for us.”

Bolles did say his team “played hard and with grit” in defeat. Logan Pearson went for 106 rushing yards on 24 carries, and Johnny Majersky added 51 yards through the air. Trayton McKinnon paced the Panther defense with 10 tackles and Majersky came up with a pick of his own on defense.

If Balkema is unable to go Friday — Bolles said Monday night that he was “50/50” to play and that his ankle was still sore — that will not help Hesperia in what is already a difficult matchup at Kent City, which pounded Lakeview two weeks ago before taking a 34-16 loss last week against current league leader Morley-Stanwood.

The Eagles will be smarting after that loss, which featured a 20-0 scoring run to end the game by the Mohawks. Max Hudson led the Eagles in the game with 87 rushing yards, and slowing him and quarterback Eli Carlson down will be vital to Hesperia’s hopes of springing an upset.

Shelby took a step back offensively Friday night, struggling to do much in a 40-0 loss to Whitehall.

The Tigers managed 38 offensive yards, less than one per offensive play. The Shelby defense did what it could, including an interception by Blake Greene, but had to carry too much of the load. Shelby was down 13-0 in the second quarter before the Vikings reeled off 20 straight points to end the half.

“Our run game had its moments where we were moving the ball well, but penalties decimated us offensively,” Shelby coach Lorenzo Rodriguez said. “The ball was wet, and we snapped the ball on the ground a couple of times, had some exchange problems.

The game was 13-0 in the second quarter. We were right here, making them earn their scores. Once it got away from us it seemed like the floodgates opened.”

Laz Madrigal led the offense with 42 rushing yards and also had a 46-yard kickoff return in the game. He recovered a fumble as well. Xavier Wallace led the Tiger defense with eight tackles.

However, Whitehall’s top back, Kayleb Venema, ran for over 200 yards, and quarterback Brodie Fogus eclipsed the 100-yard mark too.

“They generated some speed around the corners,” Rodriguez said of Whitehall. “They were pretty solid as far as their run game goes. Matchups on the interior also weren’t the greatest. They were able to balance their running game inside and out.”

The Tigers will try to find openings this week against Mason County Central. The Spartans have struggled this year but rolled past Hart earlier in the season, so they won’t be an easy mark for Shelby.

“They’re a solid club,” Rodriguez said, though he noted he liked the interior matchups better than against Whitehall. “They run an unbalanced formation that causes people problems. The biggest problem with those is recognizing them. We’ll prepare for that this week.”

Pentwater student Khole Hofmann is the focal point of the MCC offense. He gained 136 yards and scored the Spartans’ only touchdown in a loss to Ravenna a week ago. Stopping him will be key.

Rodriguez said despite all his team’s struggles, they haven’t lost the confidence that they’ll win when they take the field.

“We want to win every game,” Rodriguez said. “We expect to win every game. This is where you test what you believe in. We see our kids every day in practice. People from the outside can only see the scoreboard, but we see the reality. We’re confident we’re gaining ground constantly.”